Even the most skeptical of skeptics questioning the demise of the internal combustion engine (ICE) due to an electric vehicle (EV) “megatrend” have to take pause out of some recent news in the US. It seems the world’s largest EV manufacturer, Tesla, has inked a deal with one of the largest car rental company’s on the planet, Hertz, for the purchase of 100,000 Tesla Model 3 EVs to add to the Hertz fleet.

While Tesla CEO and founder Elon Musk claims the deal is not officially signed, Hertz claims it is already receiving cars and took yet another step into the market with the purchase of an additional 50,000 Tesla EVs in conjunction with ride sharing powerhouse Uber. Uber wants its drivers to be able to rent Tesla EVs exclusively from Hertz

Major international oil companies BP and Royal Dutch Shell added to the furtherance of the trend when announcing long term plans to cut back on oil production and pursue renewable energy options.

Advancements in battery technology may be the key to the rising demand for EVs. Despite their almost universal adoption in current EV manufacturing, there are numerous problems associated with lithium ion batteries in EVs.

From the point of view of EV manufacturers concerns include supply and sourcing of needed materials as well as carbon emissions from mineral mining and the battery manufacturing process.

From the point of view of EV consumers concerns include battery range, life, and safety, in addition to high cost and availability of charging stations. Environmentally conscious consumers also wonder what will happen to millions of batteries that have completed their useful life.

At the top of virtually every list of alternative battery technologies for the future sits hydrogen fuel cells. Investors who have been burned in the past with the hype over fuel cells might find hope in the actions of major corporations in the world today.

At the forefront is Australia’s own Fortescue Metals (FMG), first announcing the construction of a major hydrogen production plant in Queensland, followed by the announcement of an $8.4 billion dollar investment in additional hydrogen project in Argentina.

Hydrogen as an energy source dates back to the advent of the hot-air balloon to its use in the NASA space program and finally the development of the first fuel cell powered car in 1991. The first creation of a fuel cell dates back to 1842.

In the past decade there has been renewed interest in using hydrogen fuel cells in a variety of vehicles, from busses and trains to racing and basic transportation cars. Demonstration models were developed by virtually every major auto manufacturer in the world, with Toyota, Honda, and Hyundai releasing models for public leasing and sale. By the end of the decade, only two remained – Toyota and Hyundai.

FCEV’s are more efficient, lighter, have a longer driving range, can manage heavier loads, have an abundance of hydrogen supply, and emit only water vapor. In addition, a hydrogen fuel cell battery is easier to recycle and dramatically reduces the charging time over BEVs.

The disadvantages are many, beginning with the cost and methods of production. Currently most hydrogen fuel cells rely on fossil fuels in the manufacturing process, leading to more carbon emissions than they save.

Production costs remain high, with perhaps the single biggest downside being the potential cost of needed infrastructure. Right now countries around the world are scrambling to add recharging stations for BEVs. There is virtually no demand for building refueling stations for FCEV consumer vehicles.

Although investing in any stock in the race for improving hydrogen processing is at best a long term prospect. However, Toyota remains committed to the technology but has shifted its focus to large scale transportation. In the US state of Kentucky Toyota is building hydrogen fuel cell drive trains for the trucking industry. Essentially, Toyota is building drive trains that trucking manufacturers and transport companies can insert in their vehicles.

Hydrogen demand is not likely to pick up substantially, which some expect to begin in 2040, pending production cost reductions. From research and analysis firm Statista: 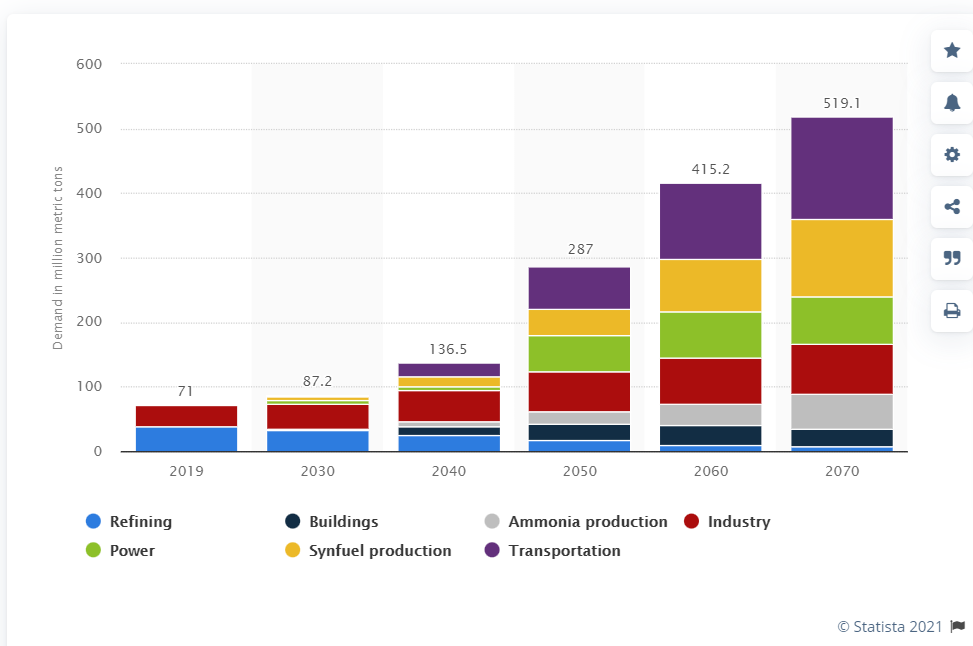 There are a number of ASX listed stocks working on both blue and green hydrogen and related technology improvements. While green hydrogen is attracting the most attention, not all articles on the technology include the availability of water as an issue.

A recent study from Norway based Rystad Energy projects that by 2040 projects currently in progress could be producing more than thirty million tonnes of hydrogen per year and using 620 million tonnes of purified water in the process.

The green process uses ectrolyzers to separate hydrogen from oxygen in water. Rystad claims that 70% of existing projects will be in locations where water is scarce. In considering an investment in this extremely high risk sector, investors should be looking for companies planning for adequate water supply.

The following table includes price performance for some of the ASX listed companies in the green hydrogen sector. 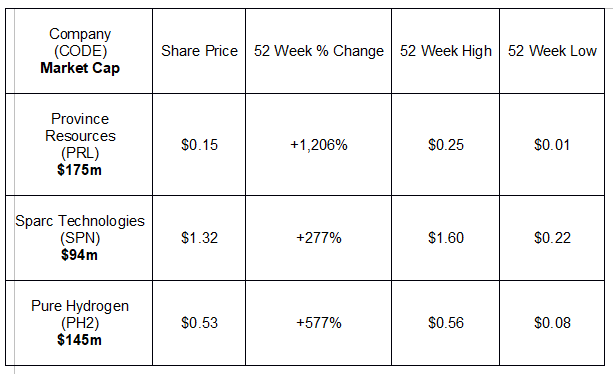 These companies are in startup mode, with progress varying from initial licensing to early stage planning. Province Resources appears to be the furthest along.

Following a pattern that is typical of many mining companies when the winds of favor shift towards a commodity, Province Resources has shed its gold assets but maintained its interests in two other commodities needed for furthering the decarbonisation trend – vanadium and nickel.

What is generating the buzz among investors is the company’s HyEnergy Project in Western Australia. The proposed site is flatland suitable for construction of solar and wind energy generating sources. Located in the Gascoyne Region, the site features proximity to infrastructure and sea water along with the fourth windiest area in Western Australia.

Province was granted its first license for environmental and on-ground studies, preliminary to formal scoping and feasibility studies.

The company has an impressive partner in place, signing a non-binding memorandum of understanding (MOU) with Total Eren, an independent renewable energy power producer with multiple wind, solar and hydro electricity generating plants around the world. France-based Total Eren built the largest the largest solar farm in Victoria.

The agreement calls for the two companies collaborating on a scoping study for the project, with companies sharing equal ownership in the final project.

The original goal to install one gigawatt (GW) of a mix of solar and wind power to produce 60,000 tons of green hydrogen per year has been increased to eight GW.

Province has also entered into an agreement with Australia based Global Energy Ventures (GEV) to assess the feasibility of using Global Energy’s compressed hydrogen shipping and supply chain technology for export. The feasibility study is underway and scheduled to be completed in June of 2022.

The first came in February when Province announced it had acquired the exploration licenses assets of Ozexco PTY LTD, with one to be the site of the HyEnergy Green Hydrogen Project.

The second came following the announcement of the agreement with Total Eren in April. 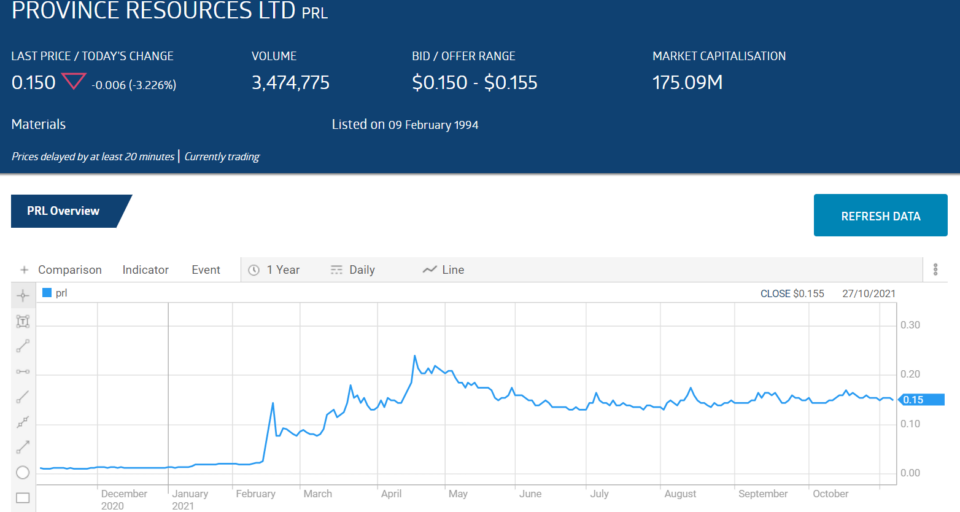 In November of 2020, Acacia Coal shifted its focus to graphene production, changing its name to Sparc Technologies. The company has a bio-medical division working on developing graphene based sensors for disease detection. Sparc has been collaborating with the University of Adelaide on the product development and now the collaboration has expanded to include a new approach to producing green hydrogen.

A joint venture between the two organisations – Sparc Hydrogen – is working to develop a new technology to produce “ultra-green technology.”

Instead of using solar and wind power as an energy source, ultra-green technology will use ultraviolet light from the sun to convert water into hydrogen. This would dramatically reduce the cost of hydrogen production by eliminating both wind and solar farms and the electrolysers.

Pure Hydrogen Corporation is another converted company that has more than a commitment to examine moving into hydrogen production.

In March of 2021, two gas companies – Real Energy and Strata-X Energy – merged to create Pure Hydrogen. The company maintains some of its gas projects, but the future plans are all about producing hydrogen fuel, targeting large vehicles that run on diesel fuel currently as well as other applications.

Investor presentations from the company are long on broad strokes of what the company plans to do but short on specific details. Two hydrogen fuel production sites are planned as well as portable production units.

Investors are buying into what some would call “hype” but on 21 October Pure Hydrogen expanded into something concrete with near term results. The company acquired a 24% interest in a company nearing production of hydrogen fuel cell vehicles – H2X Global Limited. H2X is a hydrogen fuel cell powered vehicle manufacturer, with its first offering – the Warrego Utility line of pickup trucks – expected to be released in 2022.

Pure Hydrogen will become the preferred hydrogen supplier for H2X and has options to increase its stake 48%. The company is creating another company – Pure X Mobility Pty Ltd – to sell H2X trucks and buses.

The share price shot up, but year over year performance still trails that of Province Resources. 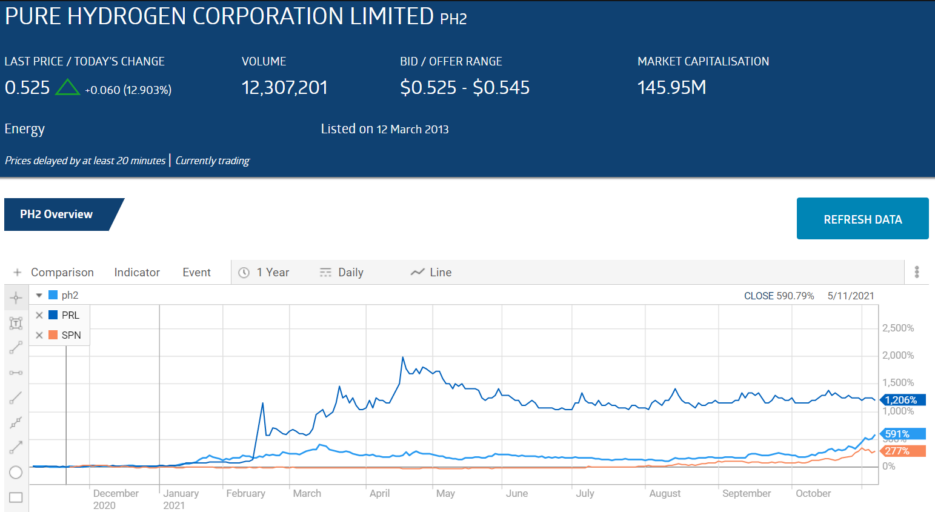 Newcomers might be wildly enthused with the massive share price gains, but seasoned investors see something else. Despite the grandiose project plans and impressive partners, none of these companies has yet to produce any hydrogen.

Even the most skeptical of skeptics questioning the demise of …