Today more than ever copper stands at the top of the heap of the commodities pile as a bellwether for the global economy. Regardless of its label as a barometer or a “canary in the coal mine” the vast list of applications for the metal have earned the right for its prophetic accolades.

Copper is an essential ingredient in interior and exterior architecture, automotive design, electrical wiring in delivery and storage, transportation, communication, electronic devices, renewable energy, and a host of manufacturing processes.

Electric vehicle proliferation, and the prerequisite updating of the infrastructure to fuel them, and the charging stations to keep them on the road spell an extended bull market for copper.

On 29 April, the already up trending price of copper eclipsed $10,000 per metric tonne, the highest level since reaching an all-time high in 2011. Expectations are the price will likely reach a new all-time high by the end of Q2, according to some experts.

Bank of America in the US issued an investor note on 4 May cautioning that the world is at risk of “running out of copper” as the gap between existing supply and demand grows. Bank analysts went on to say the price of copper could reach USD$13,000 per metric tonne this year and $20,000 per tonne by 2025.

The following price chart is from mining.com, showing the per pound price in US dollars: 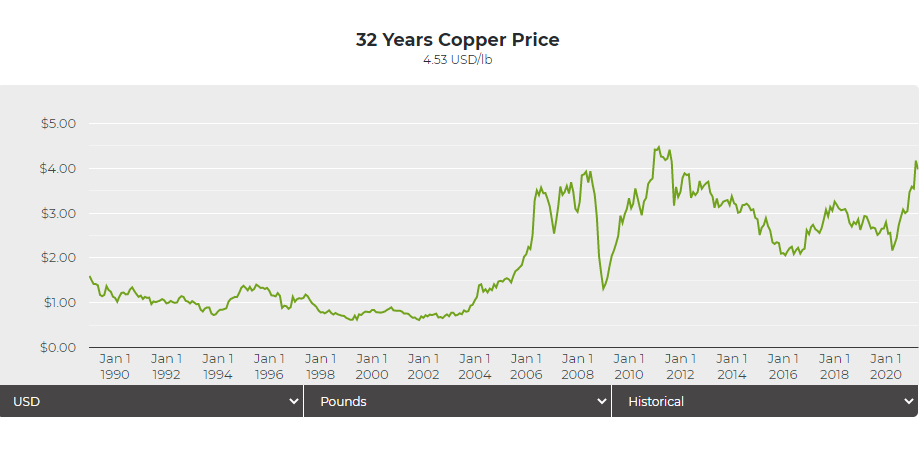 The speculation about the dramatic increases in the price of copper are supported by the following graph from the world bank that charts the gap between copper demand and supply to 2035. 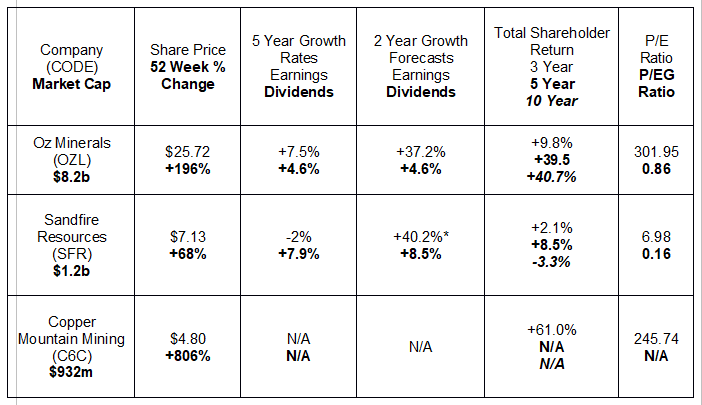 Copper Mountain Mining is relatively new to the ASX, listing on 30 April of 2018 with a first day closing trading price of $1.25. The share price is up 254% in less than three years, largely due to a continuous stream of positive announcements and a quick evolution from explorer/developer to producer.

Here in Australia Copper Mountain Mining owns the Eva Copper Project in Queensland. A completed 2020 feasibility study forecasts the project to add about an average of 100 million pounds of copper equivalent over the expected 15 year life of the mine.

Oz Minerals has gold and nickel assets, but the company’s primary focus is copper. The company has two operational copper projects here in South Australia — Prominent Hill and Carrapateena – and the Antas Project in Brazil.

The company’s principal development effort is the West Musgrave Project in Western Australia. Oz bought out its one-time partner in the project, Cassini Resources, and is now the sole owner.

To date West Musgrave is valued at $1 billion dollars and with a pre-feasibility study completed Oz is planning to increase the production and plant capacity at West Musgrave. This is a copper/nickel project with a projected mine life of 26 years and current reserves of 253 million tonnes.

In addition to the West Musgrave Project, the company has growth projects underway at Prominent Hill and Carrapateena as well as in Brazil.

Oz Minerals managed to increase both revenue and profit in FY 2020 despite COVID 19 related issues, highlighted by a 30% profit increase. The company’s Q1 of 2021 showed copper production down at Carrapateena due to operational changeovers and maintenance backlogs. The company reaffirmed its Full Year 2021 production guidance. However, brokers have mixed views on the stock, with skeptics calling the stock “expensive.”

A comparison of the P/E and P/EG ratios for Oz and Sandfire Resources highlights the concern. The average P/E for the sector is 14.39 and 0.47 for the P/EG (which takes a company’s future earnings into account. While Sandfire is well below the sector average, Oz minerals is significantly higher.

Sandfire has operational copper/gold mines at the DeGrussa Project in Western Australia and a highly prospective copper development project at Black Butte in the US state of Montana, permitted and under construction. In addition, the company has a significant copper/silver deposit at the Tshukudu Project in the African nation of Botswana. A definitive feasibility study (DFS) for the Tshukudu project presented a “base case” 3.2-million-tonnes-a-year operation, with solid expansion short term expansion potential a 5.2-million-tonne-a-year operation. Initial site activities are underway with Sandfire anticipating mining license approval in Q3 with “major construction activities” to follow.

Another measure where Sandfire outperforms Oz Minerals is cost control. In its Q1 update Oz management predicted an increase in its mining costs for the Full Year 2021 while Sandfire’s already low operating costs remain under the FY 2021 guidance.

The company’s Half Year 2021 Financial Results were outstanding, including a 13.6% revenue increase and a 78% rise in net profit after tax (NPAT).

There are two early stage development companies of interest, with one attracting substantial investor interest and the other lagging far behind. Both companies have history mining for other commodities and are now focusing on copper. The first is KGL Resources (KGL) – formerly Kenton Gold Limited – and Noronex Limited (NRX) – formerly coal miner Lustrum minerals.

Lustrum became Noronex via a mid-September IPO to attract new shareholders and offering existing Lustrum shareholders the chance to buy into the new company. In a complicated transaction, Lustrum reached an agreement with privately held Larchmont Investments to acquire 80% of the capital listed in Larchmont, with the ultimate target the Larchmont Canadian copper explorer subsidiary, Noronex. In addition, the new company secured the option to acquire “three prospecting licences that are prospective for sedimentary Cu-Ag (copper in sediment) mineralisation along the prolific Kalahari Copper Belt that spans Namibia and Botswana.”

The company is in the early exploration stages in both the Canadian and the African projects, with a drilling program expected sometime in 2021. To date, Noronex has used first of its kind airborne EM (electromagnetic) surveys to identify exploration targets. The company expects “rapid development” of JORC (Joint Ore Reserves Committee Code) estimates of reserves.

KGL changed its name in 2013 presumably to pursue development of the Jervois Base Metal Project in the Northern Territory, acquired in 2011.

The stock price remained study throughout announcements of initial progress, but it was the release of the pre-feasibility study (PFS) on 1 December of 2020 that sent the share price on a sharp upward trajectory.

The study findings that delighted investors were: 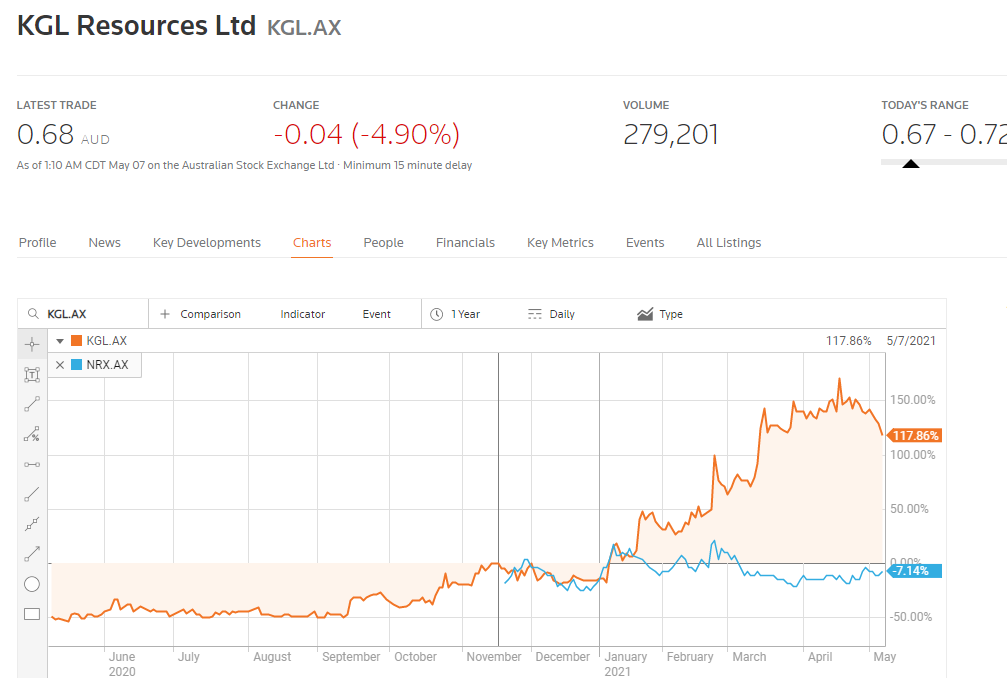 The bullish outlook for all these companies depends on the increase in demand for copper. For the skeptics, here are a few facts supporting the bullish case:

Today more than ever copper stands at the top of …