On 8 May the Sydney Morning Herald, among many news outlets, reported that an intrepid Aussie punter wagered the stunning sum of $1 million dollars on a Labor win in the upcoming federal elections, potentially vaulting leader Bill Shorten into the Prime Minister’s chair.

The odds from three betting sites favor a Labor win, although the margin is tightening. Here in Australia the term “punting” has moved from the realm of sports betting to share market investing, where investors willing to make what market analysts and experts consider to be a high-risk bet are assigned the term “punters”, along with derogatory connotations.

It seems many purists in the investing world believe buying stocks is a wise choice for one’s financial future, far from a wild-eyed bet. Yet there are similarities.

Skeptics right now could point to the rush of opinion pieces appearing in financial websites across Australia speculating on winning and losing stocks depending on the election outcome. Is that not borderline advocacy for punting? Are investors not being primed with “odds” on which to place a bet on a given stock in a given sector?

If you strip away the elitist mentality of some in the financial community, there are distinct similarities between the process of sports betting and buying a stock. Serious punters rarely, if ever, bet on a match, a team, a horse, or an individual athlete without researching the bet. Are betting odds really that different than analyst consensus ratings?

Right now, market experts are analysing the policy differences between the opposition parties with an eye towards how proposed policies would impact market sectors. In defense of a punting mentality towards stock market investing, the word “proposed” highlights what in the eyes of some is the gambling nature of stock picking. Proposed policy often remains unacted and policies enacted by one party or even within the same party can be eliminated or modified should the opposition come to power or in the event of leadership changes within the ruling party.

The renewable energy sector serves to illustrate the point. The current government under Prime Minister Morrison eliminated the NEG (National Energy Guarantee) enacted under the Turnbull government and now Labor has pledged to bring it back should they return to power. In addition, Labor’s proposed 50% renewable energy target by 2030 should provide substantial tailwinds for the ASX renewable energy sector. From the website stockhead.com we find a helpful chart comparing the Labor and Liberal party clean energy policy prescriptions. 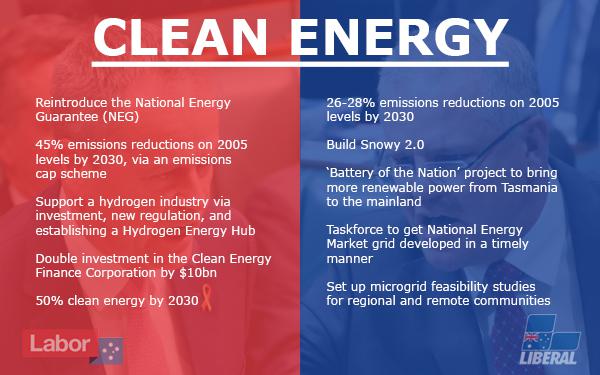 Should they win the election the Labor proposals for both emissions reductions and renewable or clean energy targets are more favorable for some renewable energy stocks than the Liberal proposals.

As an example, consider the fortunes of two ASX renewable energy players going after the enticing technology available by harnessing the power of waves to generate electricity. The two companies are Carnegie Clean Energy (CCE) – formerly Carnegie Wave Energy – and Protean Energy (POW).

Carnegie went into voluntary administration last month but in a move that some would seem as positive for the long-term future of the company or its technology, creditors voted to accept a restructuring plan put forth on the backs of sacrifices from major shareholders and corporate directors. Carnegie will relist on the ASX and yet again pursue its dreams, while some skeptics might liken the company to Don Quixote tilting at windmills.

Protean Energy has pursued the wave dream for some time but has given up, selling its interests to tilt at its latest windmill – vanadium battery technology. For renewable energy to live up to its promise breakthroughs in battery storage technology are key. Some critics have for years sneered at solar and wind, pointing to the absence of sun and wind from time to time. Battery storage technology can solve that.

Protean together with its Korean partner, DST Co Ltd, is working on a proprietary storage technology called the vanadium redox flow battery (VRFB). As is the case with many renewable hopefuls, Protean is not the only company working on this technology.

In real gambling punters can minimise risk by avoiding long-shots and sticking with odds-on favorites. In the stock market investors can stick with larger companies with more than one pony in the stable; some history behind them; and a future ahead based on technology and market size, among other things.

The Australian Ethical Investment Fund (AEF) has proven it is possible to make a profit investing in socially and environmentally responsible companies. The Fund invests in more than 25 business sectors with renewable energy production among them. Conventional wisdom says diversification lowers risk and AEF’s historical performance attests to that.

Aussie investors get exposure to a wide variety of companies but also to non-ASX listed companies. Within its holdings in renewable energies, AEF invests in the renewable energy operations in Australia of both global giants Vestas Wind Systems and Siemens Gamesa Renewable Energy, among others.

Of greater interest to anyone considering an investment in renewable energy companies is CleanTeq’s flagship Sunrise nickel, cobalt, scandium project in New South Wales. The company has another unique ion-exchange extraction and purification processing technology – Clean-iX®.

Clean-iX® will allow CleanTeq to produce battery-ready nickel and cobalt metals for use in Li-ion batteries at industry low costs, according to the company. Early investors in CLQ have been rewarded but many are losing patience with the company’ long journey towards profitability, with no end in sight. Analysts remain patient with a consensus BUY recommendation. However, investors who got in early and stayed have reaped substantial benefits as have shareholders of AEF. From the Reuters website:

The next two candidates are wind energy producers with both producing revenue.

Infigen Energy (IFN) has nine operating wind farms here in Australia with two more wind farms and a solar farm in development. The company has grown both revenue and profit in each of the last three fiscal years, with FY 2016 revenues of $172.5 million jumping to $223.7 million in FY 2018 while 2016 profit of $5.6 million increased by more than 700% to $45.7 million by 2018. Infigen has an analyst consensus rating at OUTPERFORM.

Windlab Limited (WND) listed on the ASX on 31 August of 2017, with a first day closing price of $1.92. This is a high-tech operation, utilising technology developed at the CSIRO (Commonwealth Scientific and Industrial Research) for assessing wind energy and atmospheric modeling. The technology has allowed Windlab to identify optimal sites and finance and develop five wind farms in Australia; one in Canada; and four in South Africa. Windlab has an additional 50 developments in its pipeline.

The company’s asset management operation manages and operates some projects, giving Windlab a source of recurring revenue, with 65% growth year over year in FY 2018. Windlab also generates revenue from its own equity interest in some projects and the sale of others to development partners.

Should the Labor government make good on its promise to support the hydrogen industry, there are two micro-cap ASX stocks in the mix.

Eden Energy (EDE) – now Eden Innovations – listed on the ASX in 2006 with the price of oil moving towards $100 per barrel and the eyes of the world looking to hydrogen fuel cells as an alternative energy source. The company saw itself at the forefront of a global shift to hydrogen-fueled economies with its flagship project then being a combination of hydrogen and methane called Hythane.

Hyped as the next big thing, hydrogen fuel cells failed to take off and Eden expanded its business model. Eden’s new flagship product is EdenCrete®, an additive that improves the strength and flexibility of concrete, available in the US. A similar product for enriching plastic, EdenPlast™, is under development. Another innovation is Optiblend, a technology for adapting diesel generators to run on natural gas or other alternative fuels.

The company’s latest investor presentation shows no mention of hythane in its growth and expansion plans. That could change with the arrival of an Australian Hydrogen Energy Hub.

The company claims the HAZER® Process is low-emission and highly cost-effective, giving the company a competitive advantage.

The HAZER® Process was originally developed at the University of Western Australia, with the company developing its application possibilities since 2010, listing on the ASX in 2015. With the company previously relocating its pilot plant from Sydney to Perth (Kwinana). The demand for hydrogen is rising. Although synthetic graphite is less in demand due to its high cost, the HAZER® Process could reverse that situation. 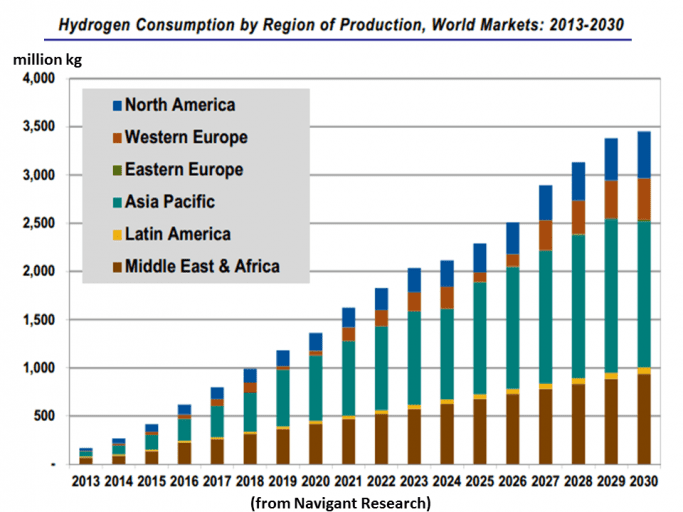 On 8 May the Sydney Morning Herald, among many news …