What is Happening to “Doctor Copper?”

While copper is not typically the primary metal used in industrial and commercial applications, its status as a “must have” component of a staggering amount of goods produced to propel the economy, the metal has earned the accolade of “Doctor Copper.”

Copper plays a significant part in residential, commercial, and industrial construction. Copper goes into power generation equipment and ordinary household electronics and other items. The metal is an excellent conductor of both heat and electricity.

In short, copper is present in virtually all of the world’s growth sectors, including the current EV (electric vehicle) push.

The price of copper went on an upward trajectory following a dip in the early days of the COVID 19 Pandemic. In the early months of 2022, copper was hitting new highs before the bottom seems to have fallen out beginning in early July. From the website marketindex.com.au a three year price movement chart tells the tale:

What happened appears to be a classic case of perception trumping reality. As inflation continued on a rampage, central banks around the world began raising interest rates, igniting recession fears.

It would seem investors and analysts alike are increasingly worried about a potential global recession, which would crush demand for many of the global goods that need copper.

Market participants have a decided tendency to “shoot first and ask questions later” in the face of negative news. The new field of Behavioral Finance sheds some light on this with their confirmation of a long-held view of investor behavior. Loss aversion claims investor concern for avoiding losses outweighs the drive to make investment gains.

Add this to another behavioral finance finding – herd behavior – and you have a recipe for investor actions relying more on perception than reality.

Right now, recession fears seem to be more perception of what could be, rather than the reality of things as they stand. The fear is growing, fueled by probability of recession predictions from major financial institutions.

On 5 July, a new report from Bloomberg Economics raised its recession probability forecast for the US from a prior 0% to 38%.

On 1 July, an article in the New York Times claimed an analyst at Deloitte said the chances of a recession in the US stood at about 15%.

In the same article, an analyst at Morgan Stanley gave the odds of a US recession at 30%.

The most negative forecast included in the article came from Goldman Sachs where analysts saw a 50% chance of a US recession in the next two years, up from 35%.

One could argue it is the shift towards increasingly negative views that are driving investor behavior. However, this suggests market participants are ignoring the inverse inherent in the forecasts. The worst case scenario also suggests there is a 50% chance the US will avoid a recession.

There are contrarian investors who adhere to the Baron Rothschild adage that “the time to buy is when there is blood in the streets.”

Recessions do not last forever, and copper’s presence in most of the world’s fastest growing business sectors makes beaten down copper stocks worthy targets for risk tolerant investors with time to wait. 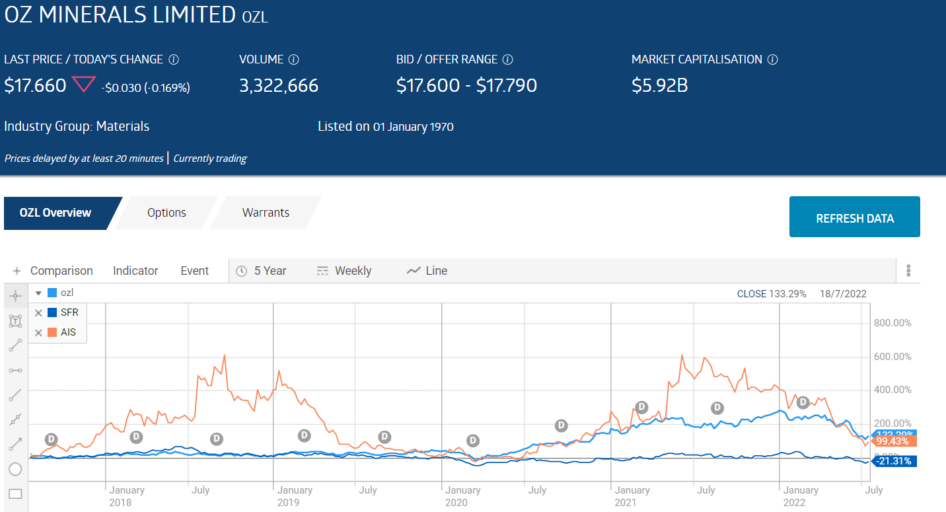 Copper is typically found alongside other metals, most notably gold. Many ASX copper miners produce both gold and copper, along with silver in some cases and other metals as well.

Oz Minerals is the largest copper miner on the ASX, with a market cap about four times the size of its nearest competitor – Sandfire Resources.

The P/E ratio (price to earnings) for the materials sector is 10.19, with only OZ Minerals posting a slightly higher P/E. The historical performance and the modest two year earnings growth forecast seems to give Oz an edge over the other two. Aeris Resources is the most beaten down of the three, making it more attractive to investors gambling on short term gains.

Oz closes its financial year at the end of December. Between FY 2019 and FY 2021 the company saw revenues increase 89% while net profit was up over the period 224%. Half Year 2022 Results will be announced on 25 July.

The company’s share price began its descent on 20 June with a 26 June announcement of reduced production guidance due to weather, COVID absenteeism, and assorted technical issues, kept the downward slide in place.

An Oz presentation at the Bank of America Global Metals, Mining, and Steel Conference included the following graph highlighting copper’s growth potential in only one of the business sectors where it is needed – clean energy technologies. 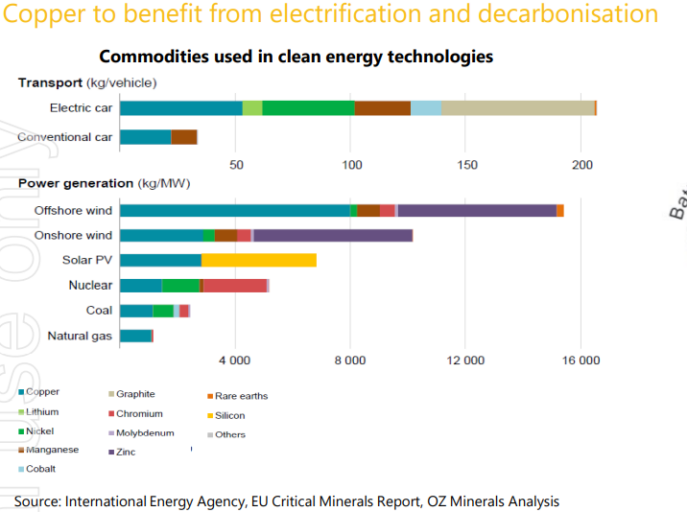 The company has two operating copper/gold/ mines in Australia – Prominent Hill and Carrapateena — with three undeveloped assets in Brazil as well as multiple expansion/exploration projects here in Australia. The nickel/copper West Musgrave Project is in its final study phase, with regulatory approvals in progress. Oz also has an option to acquire the Kalkaroo copper/gold deposits in South Australia from Havilah Resources (HAV).

Sandfire’s flagship asset is the DeGrussa copper-gold mine located in Western Australia. The company also has a majority interest (87%) in the Black Butte Copper Project situated in the US state of Montana.

Sandfire is developing the Motheo Copper Mine in the Kalahari Copper Belt between Namibia and Botswana in the south of Africa. The company expects the mine to anchor the company’s expansion plans for copper production in Botswana, with first production expected in the June Quarter of FY 2023. The Black Butte Project appears to be heading towards a favorable resolution of a legal dispute between the Sandfire subsidiary company and the Montana Department of Environmental Quality.

The company is in the midst of a “transformational” change strategy, promising a better future. The company jumped into the global production stratosphere when it acquired Spain’s MATSA Mining Operations, comprising of three underground mines producing copper, zinc, and lead concentrates. In addition, the acquisition included substantial exploration assets, now the subject of a five year expansion and development plan for the region. The cost was high at $1.8 billion dollars, but integration of the deal completed on 1 February contributed enough production to enable Sandfire to achieve Q3 of 2022 production guidance while adding $98.6 million dollars in earnings before interest, taxes, depreciation, and amortisation (EBITDA). Sandfire now sees MATSA as the company’s cornerstone asset.

Aeris Resources trails the other two stocks in most categories. However, the company lays claim to a strong pipeline of organic growth projects, coupled with an aggressive exploration program.

The Tritton Copper Operation and processing plant in New South Wales is the company’s producing copper asset with opportunities for expansion. The company’s producing Cracow Gold Project in Queensland is also in an exploration and development phase. The Jaguar zinc/copper/silver operation and the company’s copper assets in the North Queensland are also slated for additional exploration and development. Finally, the Aeris Victoria based Stockman copper/zinc project is nearing completion of a DFS (definitive feasibility study) with a decision to invest coming sometime in 2023 and construction to begin in 2024, pending a positive investment decision.

Start-up miners are always risky, with risk elevated substantially in the face of a possible global recession. Capital is arguably the greatest risk, since even the most prospective assets are rendered virtually meaningless if the miner runs out of money to bring the asset to production.

A start-up’s debt and cash on hand are critical. There are numerous copper/gold miners feverishly working on reaching production status, but one of the newest copper miners listed on the ASX is worthy of a look.

The company is Revolver Resources (RRR) that listed on the ASX in September of 2021, opening its first trading day at $0.21 per share and closing at $0.31. The shares last traded at $0.39, with an interesting twist, as shown in the following share price movement chart from the ASX website. 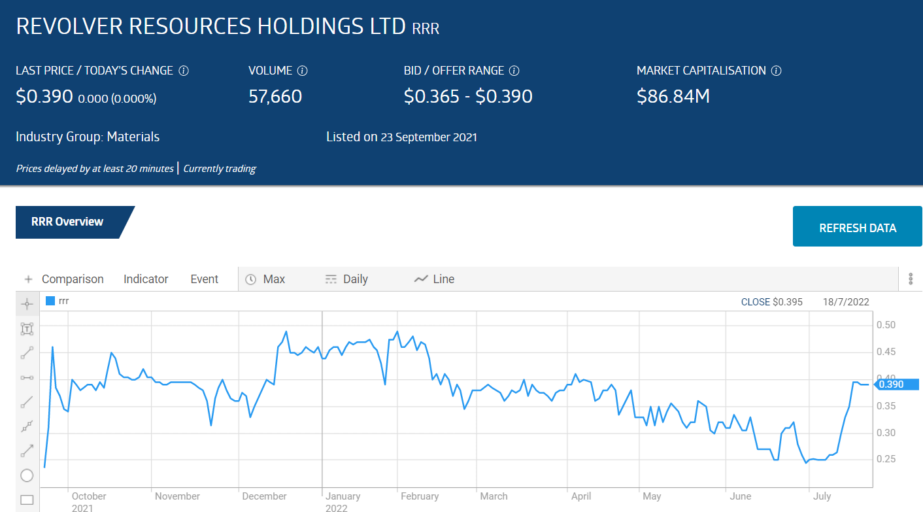 Revolver’s share price actually went up while others were dropping. The company has two “highly prospective” copper assets already in drilling campaigns – the Dianne Project and Project Osprey – with a string of positive drilling results announcements, with some early announcements earning the company an ASX “speeding ticket” for a rapid share price uptick. The company is operating on the proceeds of its IPO with a cash balance at the end of the March quarter of $8.48 million dollars, and $289,000 in debt.

On 12 July, the company acquired two exploration licences adjacent to the Dianne Project. Revolver trades in the US on the over the counter market pink sheets, symbol RVRHF.

What is Happening to “Doctor Copper?”

While copper is not typically the primary metal used in …