Lessons Learned from the GFC

Earlier in the week retail investors still reading the financial news began to see analyst/expert opinions that the dramatic selloffs both here and in the US were an “overreaction” to the uncertainty about the economic impact of the current crisis.

The “overreaction” continued in mid-week, with the S&P indices in both countries descending into Bear Market territory. In a case of dueling viewpoints, investors fearing the worst can find ammunition to support their anxieties, with noted experts in the US anticipating a full 30% market decline before bottoming out and others noting both countries may already be in a recession. Legendary investor Warren Buffet provides a dueling opinion, stating the current crisis is not as bad as the 1987 crash or the GFC. However, he is also noted for his oft repeated advice to “Be fearful when others are greedy. Be greedy when others are fearful.”

One thing some experts forget with the ubiquitous warnings to retail investors to not succumb to panic selling is margin buying. The advice to “use other people’s money” when investing causes some retailers to “leverage” a stock purchase with what is essentially a loan from their broker. In the event of a major decline such as what we are experiencing now, investors sell, not because they are panicked, but because they have to. Forced selling to meet broker-initiated changes in margin requirements is a contributor to calamitous market declines.

Retail investors with available cash are often torn between the normal advice to “buy on the dips” and the advice in this crisis to wait, ignoring a potential opportunity. The siren song of the Baron Rothschild quote “the time to buy is when there’s blood in the streets” draws some to consider investing right now.

The question on the minds of investors worldwide is “how low can it go?” Market commentators are beginning to draw comparisons between what is happening now and the GFC when the GFC led to a 50% market decline over a period of a year, with few analysts expecting that with this crisis. Relief rallies frequently surprise investors jumping in anticipating a bottom. From Bloomberg we can see two such rallies followed by more declines: 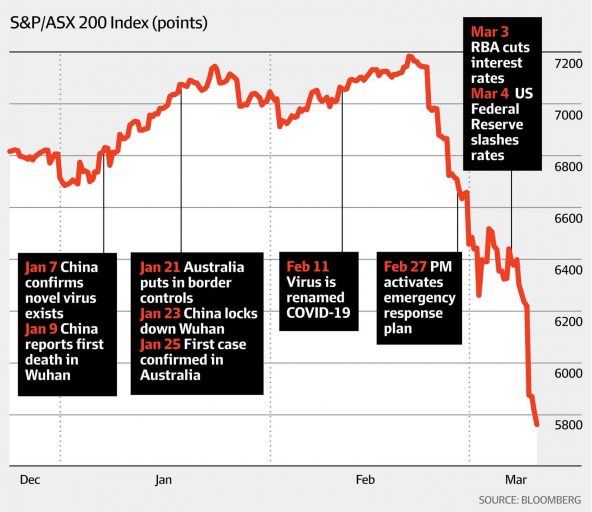 Gauging potential catalysts to rekindle the bull seems a rational approach to answering the how low can it go question. Ultimately what lurks behind any market fall is the expectation of lower economic growth and ultimately a recession.

In the absence of hard data but anticipating negative or reduced growth governments can step in with a variety of stimulus measures that could act as catalysts for markets. The above chart clearly shows that interest rate cuts in both the US and Australia failed. On 12 March the Morrison Government announced a $17.6 billion dollar stimulus package, and the ASX 200 closed down over 7%.

In response to the absence of concrete information about a potential stimulus package in the US the 12 March market opening in New York was met with a circuit-breaker induced trading halt as the S&P 500 quickly fell 7%.

Later the day the US Federal Reserve announced an injection up to $1.5 trillion into the financial system to avoid the kind of liquidity freeze that sent the GFC decline spinning out of control, igniting an intraday relief rally, cutting into earlier losses. By the end of the day, the DJIA (Dow Jones Industrial Average) posted its biggest drop since the crash of 1987, with the biggest rise since 2008 posted the following day, largely on the positive news of a possible deal on a coronavirus stimulus package.

This is one of many lessons to be learned from the GFC. Now almost 13 years in the past, many investors today have little familiarity with what happened beyond that it was not good. Although there is some debate about the starting date, no one disputes the crisis released its full fury when US investment bank, Lehman Brothers, went bankruptcy. The web of entanglements snarling the balance sheets of financial institutions around the world shocked that industry into a veritable shutdown.

When banks and other lending institutions either directly felt the sting of the bankruptcy or saw its extent, credit froze solid. Investors who had never heard of LIBOR (the London Interbank Offer Rate) began checking it daily. Like consumers and other businesses, banks need to borrow money from time to time and LIBOR is an average interest rate large global banks charge for short-term lending to other banks. LIBOR exploded, setting the stage for government induced reduction in interest rates to act as an effective stimulus. 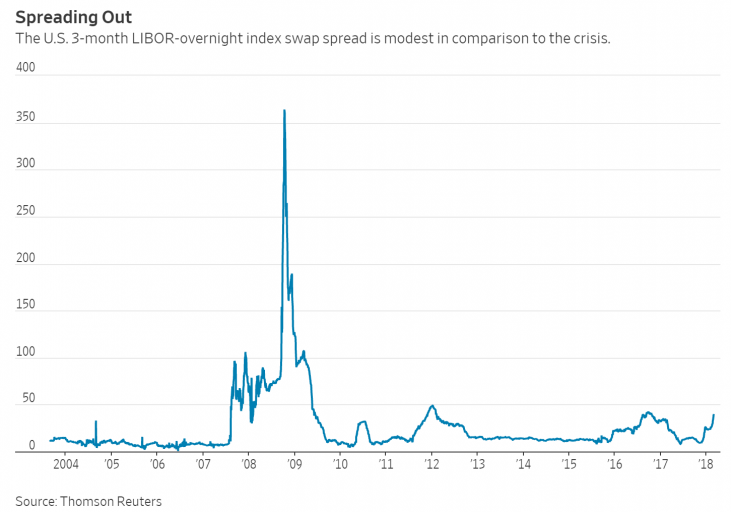 One could learn from this that the stimulus needs to fit the crisis. On that measure, lowered interest rates fail to support businesses and consumers facing cash crunches stemming from the kind of economic fallout resulting from a virus-induced demand reduction. Short term business loans are more likely to allow shaky businesses to weather the storm. But help for businesses addresses only one of the parties most likely to suffer from this crisis. Within an hour the relief rally ignited by the US Fed announcement began to dissipate as investors resumed selling pressure. The Dow Jones Industrial Average (DJIA) closed the day down 10%, and when coupled with the ASX loss following the stimulus announced here suggests the only catalyst to reverse the panic will be evidence the virus is abating.

However, US markets are clearly indicating a desire for a more robust stimulus package, which will have a difficult time navigating the partisan political divide in that country. News reports at the end of the day suggested a deal may be near. On the final trading day on the ASX the market was down 8% when Aussie investors took note of the positive futures trading in the US as investors there appear to be anticipating a stimulus package. In a stunning relief rally, the index began rising in the final minutes, closing up 4.4%

Younger investors exposed to the horror stories surrounding the GFC may be surprised how quickly a market recovery in the US began and how quickly some ASX stocks rebounded. Some might also be surprised to learn how long it took rising markets to fully recover.

Following the passive of a massive stimulus package in the US the markets there hit bottom in mid-March of 2009, with the ensuing Bull Market rally climbing continually until this week. While the lesson here is markets have historically recovered no matter now steep the decline, time of recovery varies. The following graph from the website fourpillarsfreedom.com depicts how long it took the US S&P 500 to climb back to its previous all-time high. 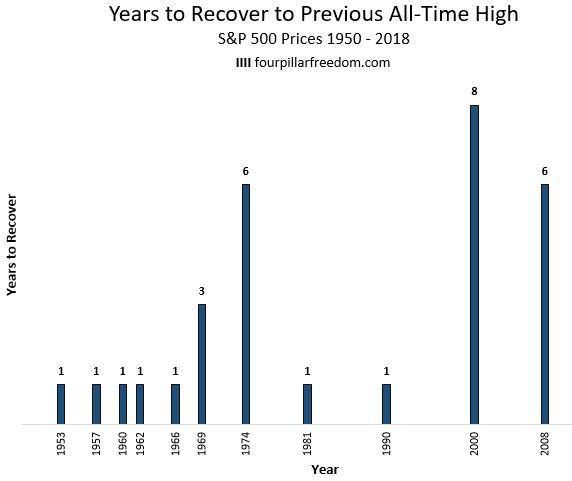 Investors willing to take the risk right now are struggling with two separate questions. When will the market stop falling and how long will it take to recover?

The answer to both is unknown but investors with resources and patience to wait do have opportunities here. Someone somewhere said, “time heals all wounds” and the aftermath of the GFC and other market collapses suggests that adage holds true for share markets as well, although many would argue that six years is too long to wait.

Another lesson to be learned from the GFC is that with declines as severe as what we are now seeing a tiny fraction of stocks are spared. Some stocks are in businesses directly affected by the epidemic, now anointed as a pandemic, such as tourism and travel. The fraction are companies actually benefiting. Here on the ASX there are a handful of small companies offering some form of health products related to the virus.

Other stocks that seem to make better targets are those suffering not from the pandemic, but from the panic. Looking back to the GFC there are a small number of stocks that recovered quickly while others suffered minor drops and then traded sideways before exploding. These are some of our major miners and healthcare stocks.

On the ASX our major iron ore miners began dropping in mid-year of 2008 followed by a deep dive post Lehman Brothers. The big three rebounded within months, arguably due to the massive infrastructure construction stimulus initiated by the Chinese Government.

Fortescue Metals (FMG) is the largest pure play iron ore miner on the ASX. The stock price dropped from an all-time high of $13.50 on 6 June of 2008 as the GFC began to clear its throat and dropped to $2.70 about two months after the Lehman Brothers collapsed. In two months, the stock price began on the road to recovery, as did diversified miners Rio Tinto (RIO) and BHP Billiton (BHP). From the Reuters financial website: 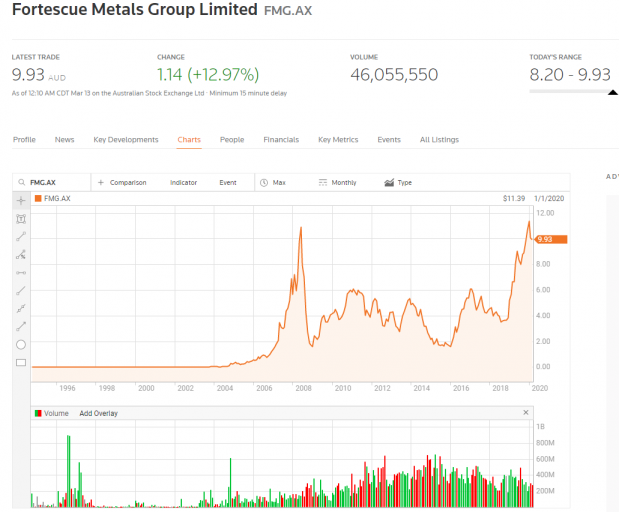 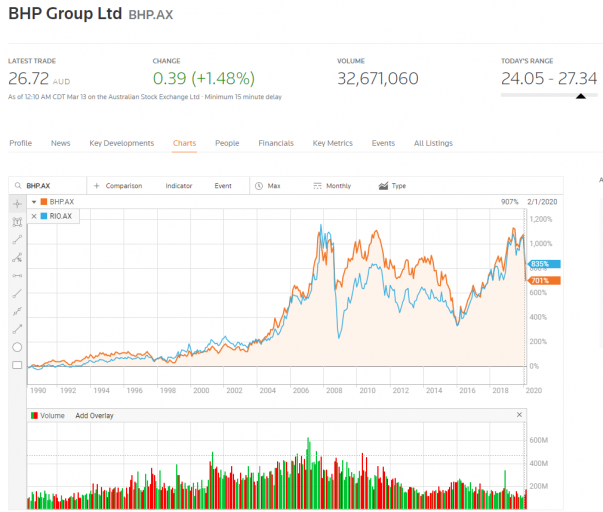 All three finished this week on a high note, with the FMG share price showing a gain over this terrible week. 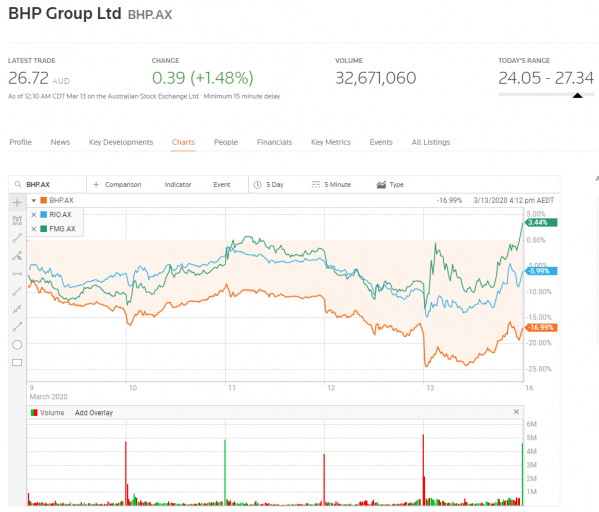 In the past month the BHP share price has dropped 30% while RIO and FMG have fallen about 20%. All three now have P/E (Price to Earnings) ratios below the Materials Sector average of 10.87. All pay hefty, fully franked dividends with BHP’s current dividend yield at 7.1%; RIO’s at 6.9%; and FMG’s at 11%.

Although investors and analysts alike may be expecting a windfall for the Big Three when the Chinese Government announces its own stimulus package, there is no certainty the Chinese will replicate the massive construction projects initiated following the GFC.

While gold remains a safe haven in challenging times, the share price of the two most successful gold miners on the ASX – Northern Star Resources (NST) and Evolution Mining (EVN) – have seen share price declines since the accelerated falls beginning on 9 March. Yet both have impressive 2-year earnings growth forecasts – 109% at NST and 52% at EVN.

Northern Star did not become a major player until the beginning of this decade but Evolution’s share, like those of the iron ore miners, were in a downtrend going into the Lehman bankruptcy and quickly recovered. 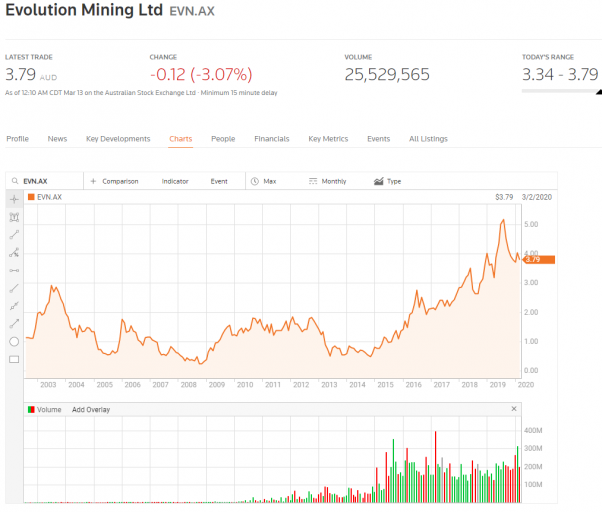 The share price of both these companies have dropped double digits in the last five days, making them a possible play for investors with extremely high-risk tolerance. 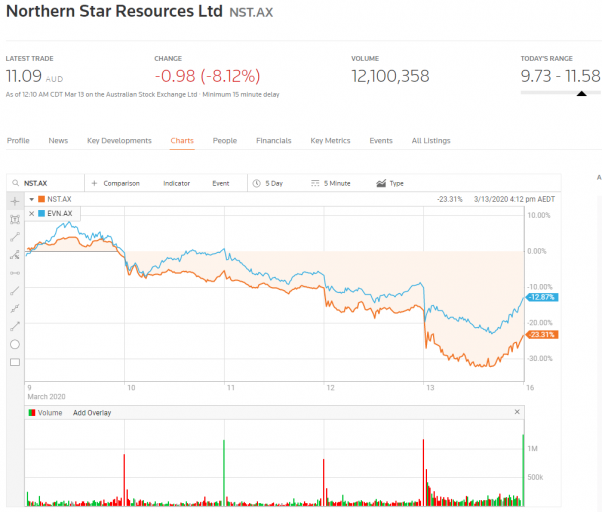 Some of the best healthcare stocks on the ASX saw small declines after the Lehman collapse and then traded sideways for more than a year before taking off, rewarding investors with the patience to wait. Vaccine and blood plasma provider CSL Limited (CSL) and providers of sleep apnea and respiratory equipment ResMed Inc (RMD) and Fischer and Paykel (FLP) 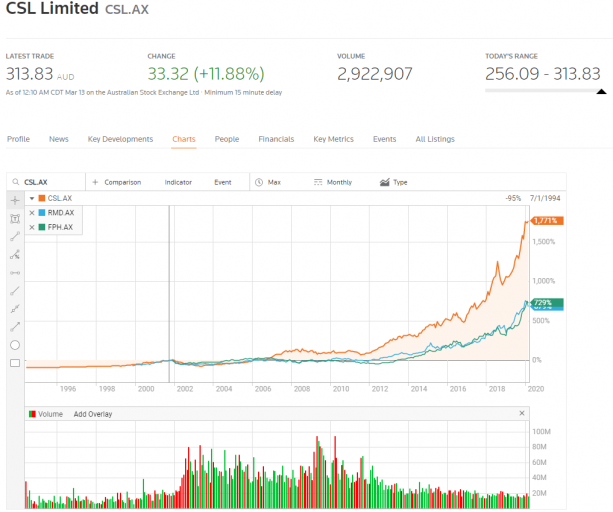 All three saw share price declines in the last five days, improving in the close of the week relief rally on 13 March. 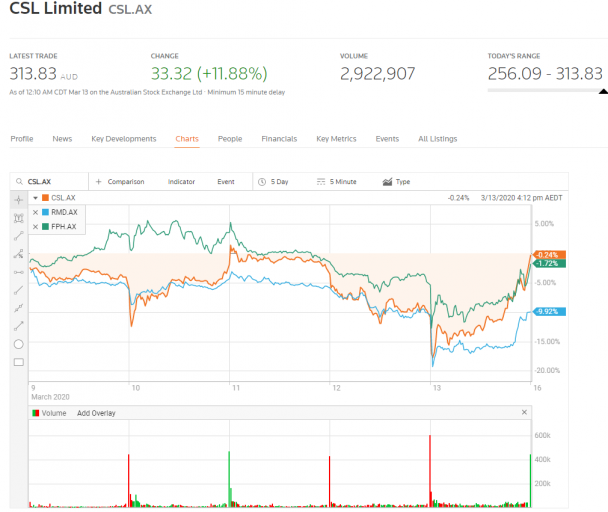 U.S. House Speaker Nancy Pelosi said she’s near an agreement with the Trump administration on a plan to mitigate some of the economic blows from the virus outbreak, with an announcement planned for today. After the markets closed in the US the House of Representatives there was expected to pass the stimulus bill later in the evening, with the US Senate expected to take up the bill on Monday.

If a slowdown or stoppage of increasing cases and deaths of the coronavirus could act as a positive catalyst, a follow-up global recession – widely predicted here and around the world – would drive markets lower. Investors looking to take advantage of the “blood in the streets” would be wise to stagger their stock purchases over time.

Lessons Learned from the GFC

Earlier in the week retail investors still reading the financial …