Under the Radar Stocks

Former chairman of the US Federal Reserve, Alan Greenspan, is credited with coining the term “irrational exuberance” in a speech in the midst of the early days of what would morph into the dot.com bubble. The term is now widely used to describe “widespread and undue economic optimism.” Irrational exuberance can seduce investors into ignoring economic uncertainties, focusing on the positive while minimising or even ignoring negative indicators.

The daily dose of financial news today seems to include “something for everyone,” with both Bulls and Bears latching on to news supporting their predilections.

On 9 July CommSec released the results of its assessment of the earnings announcements from 155 of Australia’s largest companies as an indicator of corporate reactions here to the COVID-19 Pandemic. The headline — Corporate Australia: Alert, not alarmed – had something for everyone, “alert” for the Bears and “not alarmed” for the Bulls.

CommSec’s conclusion was that investors, like corporate Australia, should remain alert, but not alarmed, through late July and August.

Longer term Bulls and shorter-term Bears can both find supporting evidence in GDP forecasts here in Australia and in the US as well. 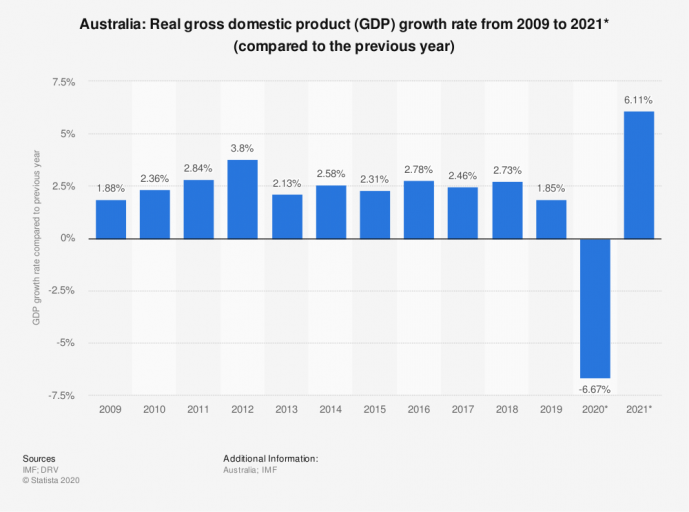 Investors in both camps who have chosen to remain active in the midst of this crisis seem to be focusing on high profile stocks, such as big name blue chips, biotechs benefiting from the pandemic, travel and leisure stocks, and others in decline. In the past week concerns over the continuing spread of COVID-19 have resumed centre stage position, with the ASX closing down for the fourth time in the trading week and US markets closing the week there up 3609 points on the Dow Jones Industrial Average (DJIA) on the news out of pharmaceutical company Gilead Sciences that its COVID-19 treatment drug, Remdesivir, is having a positive impact.

Some “under the radar” stocks present opportunities for investors with a high tolerance for risk.

Under the radar means market participants pay little attention to a stock as evidenced by low trading volumes. Low volume stocks even in the best of trading conditions are high risk for a variety of reasons, key among them the high volatility and liquidity challenges presented by a paucity of trading activity. It is easy to buy a stock few people want but difficult to sell.

Conventional wisdom suggests due diligence focused on why the company is unable to generate investor interest. Typically under the radar stocks are microcap startups with little history and often questionable growth prospects. However, there can be stocks with potential flying under the radar because they operate in sectors in which the market has little positive interest at the moment.

In today’s environment, an otherwise promising transportation stock in the airline sector is likely to be shunned by market participants as too risky to buy and too small to short. Short selling generates a profit for investors as the stock price goes down, not up.

Another sector currently out of favor is battery minerals and metals, most notably lithium. The top lithium miners on the ASX – Galaxy Minerals (GXY), Pilbara Minerals (PLS), and Orocobre Limited (ORE) – all are in the top 20 on the Top 30 ASX shorted stock list, and have seen dramatic drops in share price since the glory days of lithium mining saw all three reaching all-time highs in 2017. 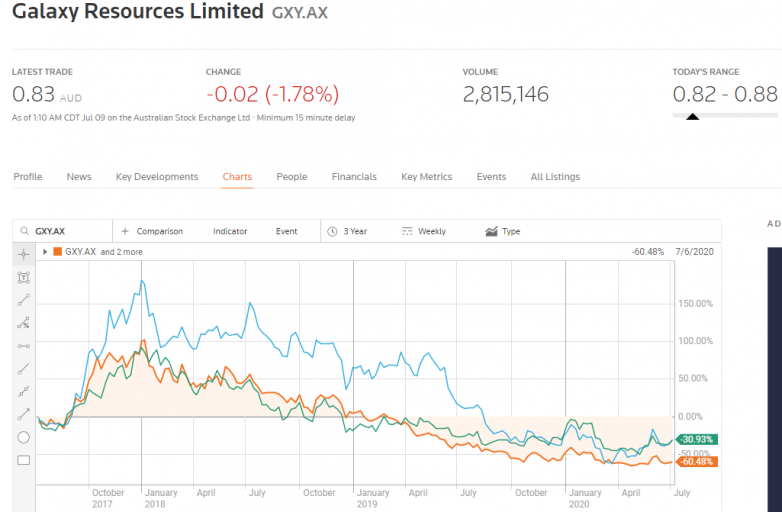 The lithium story should be familiar to Aussie investors who won and lost during and after the iron ore boom. As the price of a commodity skyrockets, more miners everywhere step into the mix, eventually leading to a supply/demand imbalance.

The hype over the coming electric vehicle (EV) revolution saw investors in droves flocking into any mineral or metal stock remotely connected to the upcoming demand for suitable batteries, most notably the Queen Mother of battery metals – lithium. Miners also jumped into the rising sector.

The result is predictable should forecasted demand be slower than expected in coming. The price of lithium cratered and so did the fortunes of the miners that rely on the price.

The so-called EV revolution may be delayed, but investors searching for longer term demand outlook for the metal come to one inescapable conclusion – the demand picture remains intact. Current oversupply conditions also led to a predictable response on the part of the miners – delays in expansion and exploration projects – which opens the door for upward pricing spikes as excess inventory evaporates. The following graph is from BNEF (Bloomberg New Energy Finance). 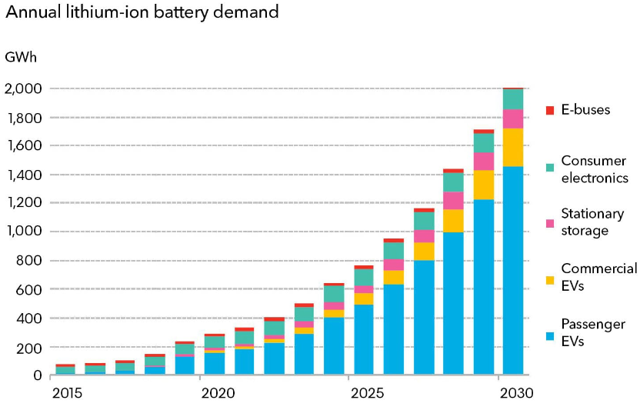 The COVID-19 Pandemic is adding to the woes of EV battery development, but few, if any, experts tell us the rise in demand for EVs and the batteries that power them is no longer on the horizon.

The major ASX lithium players got a boost in early February as the share price of the most followed EV manufacturer in the world – Tesla – hit $900 per share. Tesla is now trading around USD$1545.

The following table lists three under the radar lithium stocks. The first – ioneer Limited (INR) is following the traditional mining path while the other two – LPD Limited(LPD) and Lithium Australia (LIT) – are taking an “out of the box” path, using new technology to produce lithium from new sources.

To demonstrate their “under the radar” status, industry leader Pilbara Minerals has averaged volume of 18 million shares a day over the past month, with ioneer averaging 5 million, Lepidico 15 million shares, despite its sub-penny share price, and Lithium Australia averaging 2.1 million shares.

Some analysts advise investors interested in the lithium sector to look for companies with additional mining revenue sources. Ioneer fills that criterion with its flagship Rhyolite Ridge lithium-boron project located in the US state of Nevada. 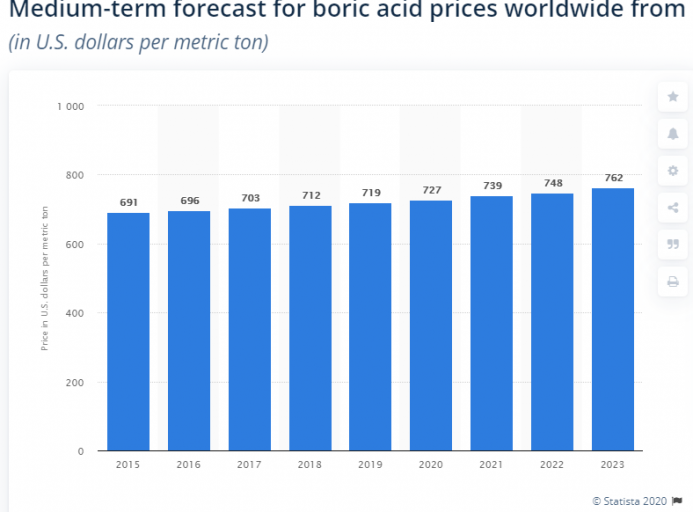 The company began in 2007 with its initial focus of applying geoscience technology to minerals and metals exploration reflecting its name – Global Geosciences. In 2016 one of the original founders learned of the unique mineralogy of the Rhyolite Ridge site, composed of two thick sedimentary layers of lithium and boron. The paucity of clay in the deposits means the Rhyolite Ridge Project could emerge as the lowest cost lithium source on the planet, according to the company.

Ioneer acquired the project in 2017, proceeding methodically through successive positive steps from licensing and environmental permitting, successful capital raises, to the successful completion of a Definitive Feasibility Study (DFS) released in April of 2020.

Investors were buoyed by the following summary conclusions of the DFS released by Ioneer:

The company has submitted its Project Plan of Operations for the Rhyolite Ridge Lithium-Boron Project to the United States Bureau of Land Management (BLM). In 2019 the company secured the services of global investment banking giant US-based Goldman Sachs to find a funding partner for the project, a process that is ongoing with a list of interested parties now in place, according to an article in the Australian Financial Review (AFR).

Lithium today comes from two processes – extraction from brine and hard-rock mining. Australia is the world leader in hard rock production from spodumene, a more cost-effective method than brine extraction with its weather dependent evaporation process.

Lithium is also found in lepidolite, a mica mineral, but extraction for commercial use has yet to achieve commercial viability. Enter Lepidico with its L-Max® metallurgical technology that recovers lithium from micas like lepidolite.

In theory, this could lead to a new source of lithium supply. In December of 2015 fledging copper/gold miner Platypus Minerals announced a shirt in focus to lithium, later changing its name to Lepidico. By the March Quarter of 2016 investors began to be flooded with a steady stream of positive news on the future of the L-Max® metallurgical technology, from sourcing supply for the mica needed for extraction to the development of processing plants.

Through it all, the share price barely budged, although the announcement that Galaxy Resources had taken a 12% interest in Lepidico produced a substantial, but ultimately fading, upward movement. 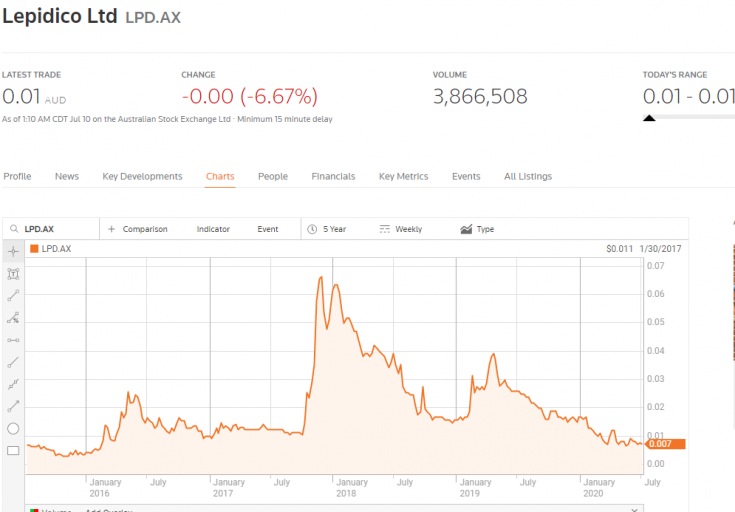 The company has successfully produced lithium at its processing facilities and on 20 June announced it had received patent approval in Europe, and investors yawned again. It is possible investors remain unimpressed with the potential or have been burned in the past with “story stocks” promising to revolutionise the world with endless promises and few results.

Lithium Australia (LIT) is a penny stock with a story virtually identical to Lepidico. Lithium Australia has revolutionary technologies that will allow production of lithium from heretofore untapped resources. In Lithium Australia’s story, the “source” material is discarded electronic/battery and d mining waste. Given its attractive potential for environmental improvement, the company has alliances and projects underway here in Australia as well as in Europe and North America.

Three-month price movement charts reflect the first weeks of the global market turnaround. As further evidence Lithium Australia and Lepidico remain under the radar, neither company benefited from re-energised investors flooding the market.

Few sectors were hit as hard by the pandemic as the travel and leisure sector. Yet within the ASX listed airlines, a small cap ($121 million market cap) regional airline — Regional Express Holdings (REX) – has seen its share price rise 72% over the past three months while iconic Aussie airline Qantas (QAN) has dropped close to 2% over the same period.

The 30-day average trading volume for REX is an astounding 160k shares per day. The company has grown both revenue and profit in each of the last three fiscal years. Regional Express offers regular public transport, charter services, freight services and training.

The company recently announced its intention to raise $30 million to for airplane purchases to support its expansion into more cities on the east coast.

Under the Radar Stocks

Former chairman of the US Federal Reserve, Alan Greenspan, is …