The search for rewarding things to do during COVID 19 lockdowns led a flood of newcomers to share market investing. Younger investors entering the world of stock trading was a trend already underway, but the pandemic fueled that trend.

A 12 May article appearing in the US financial website CNBC reported that major US online brokers saw a 170% increase in new accounts in the first quarter of 2020. The combination of the steep market decline and the rapid recovery contributed to a staggering addition of three million new accounts for the trading app Robinhood. 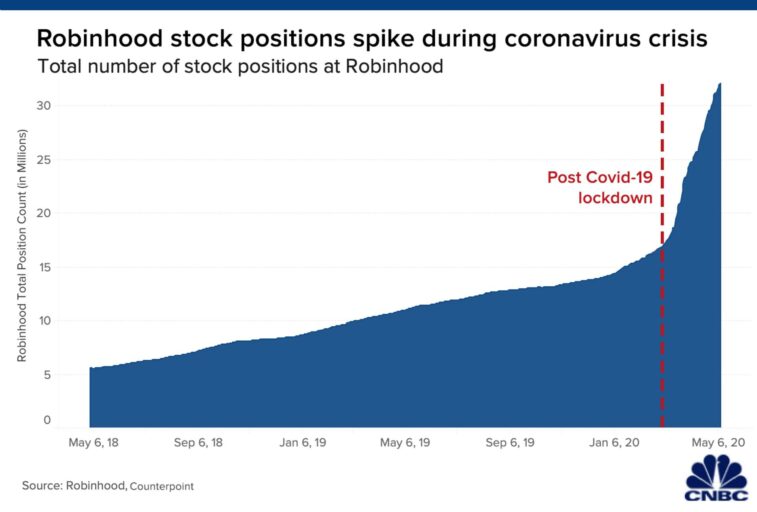 The flood of newcomers and the Reddit phenomena are raising concerns among many in the professional investment community about the lack of education in markets.

One of Australia’s premier trading platforms, CommSec, added a market education section to its platform called CommSec Learn. There is an abundance of other educational websites available for those willing to take the time.

These sites cover the basics, and some, like CommSec, do so with objective facts and observations without specific recommendations.

An example is the section on Initial Public Offerings (IPO). The section does an excellent jog of covering the fundamentals, and points to key risks regarding the price of an IPO without comment. Here are the listed points to consider from the CommSec Learn website:

Newcomers may respond to the “siren song” of the proverbial getting in on the ground floor of a new listing, with visions of stocks like Afterpay in their sites. The financial firms that manage Initial Public Offerings have a vested interest in making a potential listing as attractive as possible. In many cases, detailed analysis of earnings growth prospects are given short shrift, substituted by statistics on the share price gains of new listings.

Each company seeking an IPO listing publishes a detailed Prospectus that contains relevant information on the company’s history, business model, competition in the sector in which the company operates, and in some cases, growth projections.

Although the expert advice to read an IPO prospectus before investing is universal, it is often ignored in favor of “story” stocks with hot technologies or operations in hot sectors.

Looming above it all are those ubiquitous claims of share price appreciation.

It is here where newcomers need some education lacking in far too many articles on IPO’s in general or on specific IPO’s.

First, the majority of the retail investing community do not have access to buy shares at the “issue price” listed in the prospectus. Instead, they buy in on the first day of trading at the market price. But the claims of percentage gains more often than not use the issue price as the baseline, not the higher price a retail investor may have paid.

The arrival of OnMarket.com has opened the door for ordinary retail investors to invest in select IPO’s of small to medium sized companies through a bidding process.

One IPO listing in 2021 that was available via the OnMarket bidding process illustrates the point of misleading claims of percentage gains.

Investors scouring the internet for share price performance of 2021 ASX IPOs will come across a stated 45% gain for shares of SHG. That number is based on the issue price, not the price paid by the majority of retail investors. Those who bought in at the opening price of $0.35 per share lost money, although the stock price is currently on a recent upward trend.

A share price performance chart for SHG from the ASX website highlights a not uncommon phenomenon cited by skeptics of early investing in IPO stocks. 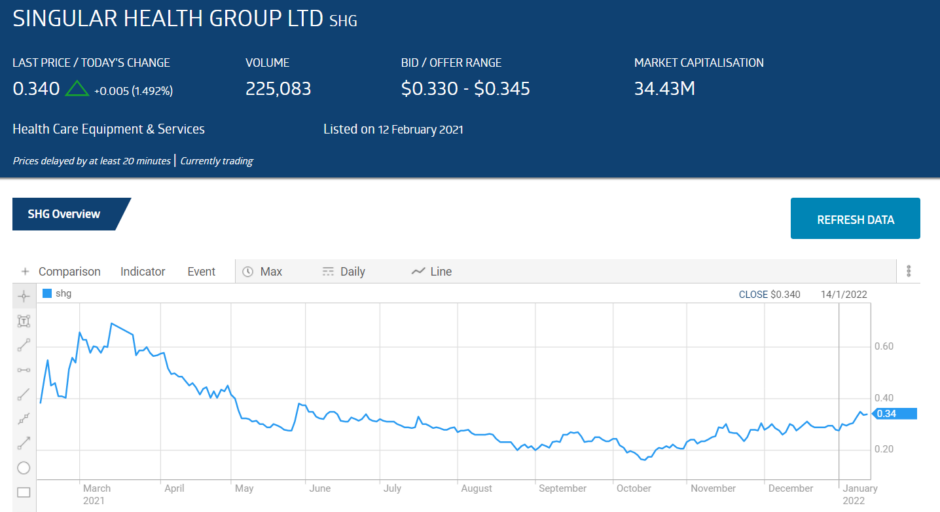 Singular has a promising proprietary technology that can rapidly convert 2D imagery to 3D with available virtual reality viewing. Eager investors drove the price up quickly, only to sour on the company, leading to a long, slow, and painful decline.

Investors who heed the cautions expressed by many analysts experts are aware startup companies with products awaiting full commercialisation are in a race against time. A primary concern is ensuring cash will last until product launch.

Less than one month after listing Singular went into a trading halt followed by a suspension from quotation awaiting an announcement. The announcement came and investors were unimpressed with the sale of fifty of Singular’s software licenses; an acquisition of an additive software company, and an investment in another.

Nearing year end, investors learned of positive developments between Singular and the CSIRO in the company’s core focus – medical imaging.

Investors who skipped a thorough review of the Singular IPO Prospectus may have been surprised to learn the company’s joint venture with TerraCentric Pty (included in its IPO prospectus) to commercialise virtual reality and 3D software with a focus on mining data had successfully completed its pilot project. The 50/50 joint venture company is called GeoVR Pty Ltd. As of the most recent quarter (MRQ) Singular’s low debt — $148k – and cash on hand of $4.14 million should ease investor concerns over the now dual nature of Singular somewhat.

Unlike many IPO’s, Singular has actually generated some revenue — $456k on a trailing twelve month basis. Some extreme hard core critics of IPO investing argue investors should avoid any newly listing company with no history of revenue generation from product sales.

The idea is simple. The race is to reach profitability and companies already generating revenue have shown some level of demand for what they make that could keep them operating until profitability arrives.

Yet one of the most successful IPOs of 2021 is a recent (2018) entry into the lithium mining space that has yet to produce a single ounce of lithium – Global Lithium Resources (GL1). The company listed on the ASX on 31 My with an issue price of $0.20 and an opening price of $0.30 per share on its first day of trading. GL1 latest closing price was $1.54, an increase of 413%.

The price of lithium has risen from the dead and the EV revolution is near at hand, as virtually all major automobile manufacturers are not only spinning out more EVs, but also abandoning production of most if not all ICE (internal combustion engine) powered vehicles.

Not content to focus solely on developing the Marble Bar Project, on 23 December the company announced the acquisition of 80% of the lithium rights in the Manna Lithium Project from Breaker Resources NL (BRB). The GL1 IPO prospectus did state funds from the offering could be used for acquisition activities.

Global Lithium has reported positive assay results from its initial resource exploration program. The prospectus declined to offer any financial guidance and stated the company would likely remain in exploration activity for two years. Global Lithium holds a total of five exploration licenses within the Marble Bar Project.

The company has three operating divisions – Chemical Manufacturing, Warehousing and Distribution, and Environmental Solutions. It offers specially formulated chemicals as well as branded products, along with logistics and warehousing and transport of hazardous waste. The Environmental Solutions divisions offer recycling services along with waste management, treatment, and disposal.

Risk averse investors should take note of companies like DGL with more than a decade of business history, allowing management to include that rare thing in the company’s IPO Prospectus – financial forecasting.

On 31 August, the company reported its first financial results as a publicly traded company, with “pro forma” accounting allowing discrepancies from traditionally accepted accounting principles required for company’s listed for an entire year.

DGL management was confident enough to issue forecasts in the Prospectus and the company exceeded all of them.

From the company release to the ASX, here are the Pro Forma highlights for FY 2021:

The company made key acquisitions since listing and is aggressively looking for consolidation acquisition opportunities with complementary businesses. Management has not experienced issues with lockdowns and is optimistic about FY 2022, stating DGL would exceed its NPAT and EBITDA forecasts listed in the prospectus for FY 2022.

The search for rewarding things to do during COVID 19 …