Surprising as it may seem to some, one of the unintended outcomes stemming from the COVID 19 Pandemic has been a dramatic rise in stock market investing from retail investors. This according to multiple sources around the world.

The latest comes out of Europe where a survey sponsored by UK based ITI Capital found 39% of investors there “had dramatically cut spending to fund investments” in 2020.

Here in Australia an article appearing in the online edition of Business Insider Australia had this to say about the launch of “trade knowledge tool” for new investors on our largest online trading platform, CommSec, a wholly owned subsidiary of Commonwealth Bank.

By design, the platform – CommSec Learn – “is intended to provide general information of an educational nature only” as stated in a disclaimer on the site. General information is a great starting point, but serious investors will find the lack of specifics in some areas problematic.

The content builds, with defining investment goals and developing an investing strategy setting the stage for a later section — Tools to help you discover opportunities.

One of those tools, which is available to investors with a CommSec trading account, is the stock screener.

Yet even seasoned retail investors find it challenging to define the search criteria to produce the results they want. Some ASX financial websites have pre-defined stock screeners, based on parameters like dividend yield, P/E (price to energy ratio) and share price movements such as stocks reaching milestones like 52 Week Highs or Lows.

The 52 Week High and Low lists fit perfectly with either a growth strategy or a value strategy. Growth investors believe in the maxim to buy high and sell higher, so stocks on fire are potential investment candidates for a watchlist. Watchlists are an opportunity tool covered in the CommSec Learn curriculum. Bargain hunters who believe in buy low and sell high can search the 52 Week Low list. In both cases, additional research is needed before making an investment decision.

In the past week five once rising ASX stocks made the 52 Week Low list found on msn.com/en-au/money/stockscreener. One achieved and held market darling status for more than a year – the a2Milk Company (A2M).

The New Zealand based company makes a line of superior milk products using only the A2 beta-casein protein, eliminating the downside of milk using the more common A1 protein.

There is another once rising New Zealand based company in the milk products sector — Synlait Milk (SM1) and finally, a producer of Omega-3 oils used in infant formula and health supplements – Clover Corporation (CLV).

All three were impacted by the pandemic, initially due to panicky consumers stocking up on infant formula in the early days of the pandemic followed by a subsequent reduction in demand. The two stocks directly involved in producing infant formula – A2M and SM1 – have still rewarded long term investors with triple digit gains over the last 5 years. 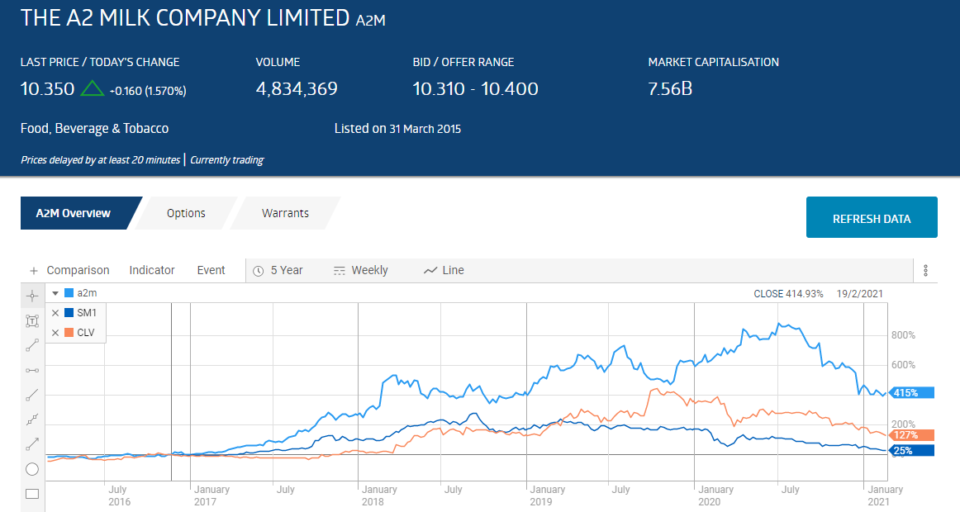 In 2008 Chinese mothers were shocked to learn some of the domestically produced infant formula they were feeding their children was laced with melamine in order to make the protein content appear higher than it was. Melamine is a chemical used in plastics and fertilizers.

The scandal sent Chinese consumers scurrying for alternative sources, with Australian producers getting a boost from our reputation for producing high quality foods. Bellamy’s Australia, now owned by China Mengniu Dairy, used its position as one of only a few companies with certified organic status in both China and Australia, to become an early major player in the Chinese infant formula market.

The raging demand in China led to troubling marketing practices and the Chinese government stepped in with increasing licensing requirements and modifying distribution arrangements. To compound A2 Milk’s problems, competition for the lucrative market intensified with the globally recognised Nestle’s brand entering the Chinese market with its own infant formula product using the A2 protein.

Despite the challenges, the A2 Milk Company had solid financial performance in FY2020, with revenues increasing 32.8% and net profit after tax (NPAT) increasing 34.1%. While milk revenue in the US increased more than 90%, the company’s total revenues of $1.73 billion include $1.42 from infant products and $333.7 million of that coming out of the China market. The A2 Milk company distributes its products in more than twenty thousand stores in China.

A devasting 18 December market release from the A2 Milk company outlined the multiple problems facing the company beyond the earlier impacts from the pandemic.

The “Daigou Channel” is essentially a network of “professional buyers” who buy products from out of the country for residents of mainland China. A2 Milk relies on this market, which was disrupted by falling tourism, fewer international students gong back and forth to China, lockdowns, and border closures. The A2 Milk Daigou supply chain includes commercial companies buying in Australia for the Chinese market.

Although the company anticipated a temporary impact, the lockdowns in Victoria changed all that and management now expects a longer delay in the return of that distribution channel, affecting the guidance for FY 2021. Guidance was revised with revenue guidance falling from NZ$1.48 to NZ$1.9 billion to NZ$1.4 billion to NZ$1.55 billion.

The share price hit the bottom and some brokers placed a SELL rating on the shares. A2M is on the ASX Top Thirty Short List. However, the market growth remains substantial and A2 Milk has survived the intense international competition for the Chinese infant formula market to date. 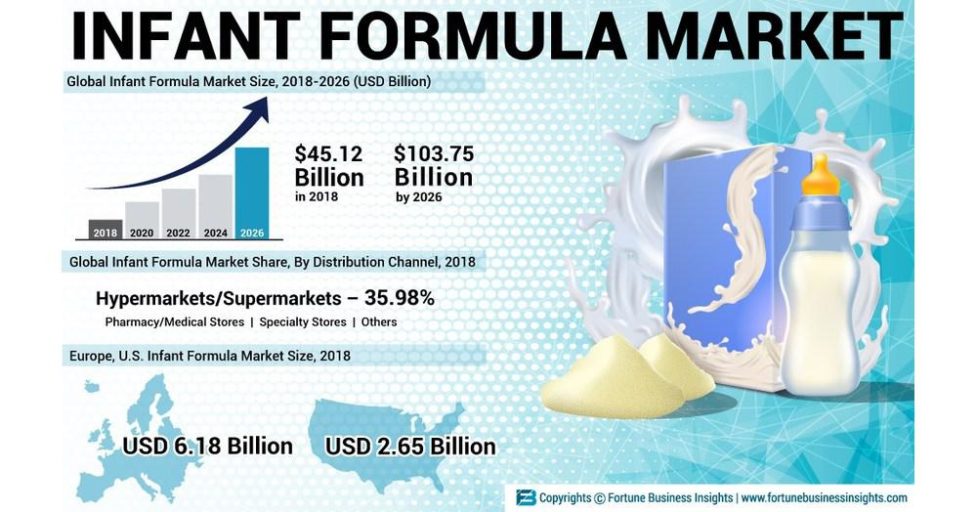 Synlait Milk (SM1) is “joined at the hip” with fellow New Zealand dairy company A2 Milk. The company has a long term agreement to supply infant formula for A2 Milk customers in New Zealand, Australia, and China. The A2 Milk Company has a 19.8% equity interest in Synlait.

In addition to its core and growing milk business, the company produces nutrition products for both adults and infants, claiming the title of the “largest infant nutrition manufacturer in the Southern Hemisphere.”

As expected Synlait reduced its guidance for FY 2021 due to decreased demand from the A2 Milk Company. The company promised another update on 29 March, but the 21 December release showed substantial changes in the company’s outlook, expecting a 35% drop in “consumer-packaged” infant products, and an FY 2020 NPAT half of the FY 2020 result.

The Clover Corporation (CLV) began as and remains a refiner of omega – 3 oils. Listing on the ASX in 1999 the company has grown to provide DHA (docosahexaenoic acid) omega-3 fatty acids in both oil and powder form for use in infant formula, children’s foods, health supplements, and medical foods. The products are provided in capsule form for easier compounding by Clover customers.

Like the producers of the infant formula products containing Clover’s omega-3 fatty acids, the share price has risen and fallen with the shifting tides of infant formula demand.

In FY 2020 Clover faced additional challenges in the forms of bushfires and regulatory oversight but managed to post positive results for the year. Revenues were up 15% and NPAT rose 23.6%. The panic buying in the early days of the pandemic contributed to the result, raising investor concerns as lockdowns and border closings began to hurt Clover’s infant formula producing customers.

Company guidance released on 20 October was later reiterated – revenues for the Half Year 2021 would drop 15% to 25% compared to the prior year.

While the long term demand for infant formula remains strong, Clover has the added benefit to investors of a “range of new products about to be released” in new applications including breads, yoghurt, health bars, and sports nutrition.

As its use to date has been in health and health supplement products, the benefits of DHA have yet to be proven. The Clover research and development team conducted a systematic review of the scientific literature from 2000 to 2018 on the impact of DHA on the heart and cardiovascular system, the brain and visual function, inflammation and immune function and growth/Body Mass Index.

Of the 113 studies reviewed, 42% reported statistically significant positive results following the use of high DHA fish oils, with 65% in heart, 32% in brain and 44% in other medical aspects.

While the infant formula sector was hurt by the pandemic, some ASX stocks benefited. The fortunes of two of them have reversed, hitting 52 Week Lows in the past week. 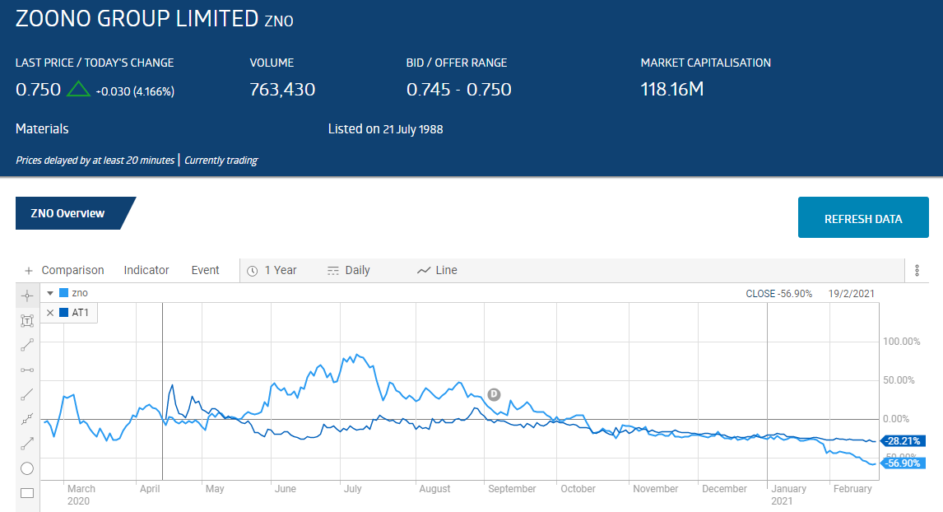 While the global demand for the kind of high quality products Zoono Group makes, investors spotted a troubling sign in the company’s release of its 2021 Q1 sales. Compared to the most recent quarter – Q4 of 2020 – sales dropped 28%. The share price has been sinking since.

Atomo Diagnostics (AT1) designs blood based rapid diagnostic tests (RDT). These medical devices eliminate the need for trained medical practitioners for administration and combines the multiple steps in a diagnosis into a single device. The device can be self-administered with a simple prick of a finger.

Atomo is new to the ASX, listing in April of 2020, and has six device platforms available, with an HIV RDT for professional use recently approved for use by the Australian TGA (Therapeutic Goods Administration). The company also has a TGA-approved AtomoRapid COVID-19 antibody test available in the Australian market.

The AT1 Share price took off on the news the company was looking into developing an RDT for COVID 19 diagnostic testing, but the share price has been in steady decline since October of 2020.

A positive company announcement on 6 December of 2020 failed to stop the bleeding. Atomo announced increasing availability of self-test Atomo HIV tests in Australia, Germany, Taiwan, Viet Nam, South Africa, and other African nations. In addition, with the recent TGA approval, the company announced the launch of the commercial version of the Atomo HIV test in early 2021.

Surprising as it may seem to some, one of the …