About four years ago someone in the investment community decided what Australian investors really needed was our own acronym consisting of heavy-hitting tech stocks, and so WAAAX came onto the scene. The earlier US counterpart – the FANG stocks – consisted of Facebook, Apple, Netflix, and Alphabet (Google). Our own WAAAX acronym includes Wisetech Global, Afterpay, Altium, Appen, and Xero.

The tech sector has been a leader among ASX sectors for some time, finishing first in 2020 and second behind healthcare in 2019. For the Financial Year 2021, the Information Technology Sector trailed Consumer Discretionary, up 38.8% versus 42.2%.

Over five years four of the five WAAAX stocks – Wisetech, Altium, Appen, and Xero rose from 300% to over 600%. The exception was tech leader and market darling Afterpay, up about 3500%, flattening its peers when included in the performance chart. 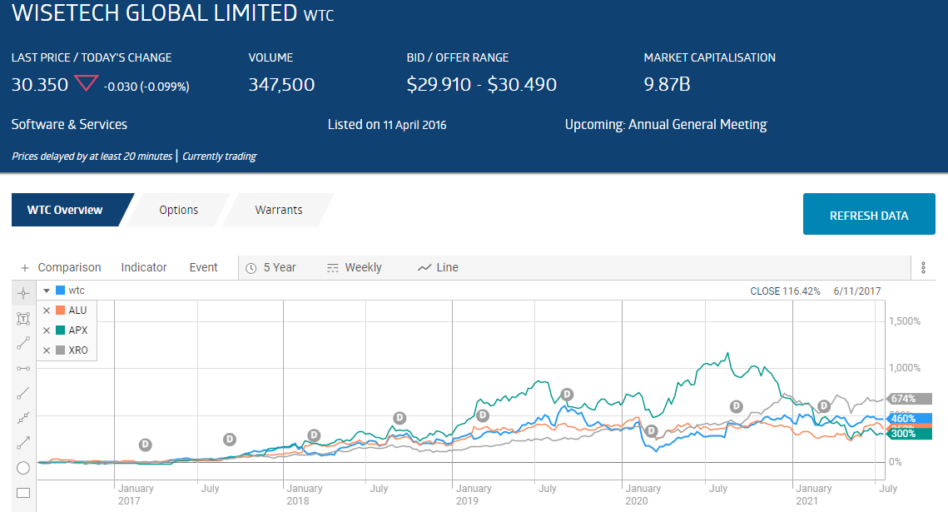 In its month end report for June of 2021 FNArena reported the tech sector in the top spot, up 13.4%. However, the WAAAX stocks remain stuck in a moderately declining downtrend that began at the close of the trading year 2020 and did not contribute to the positive June result. 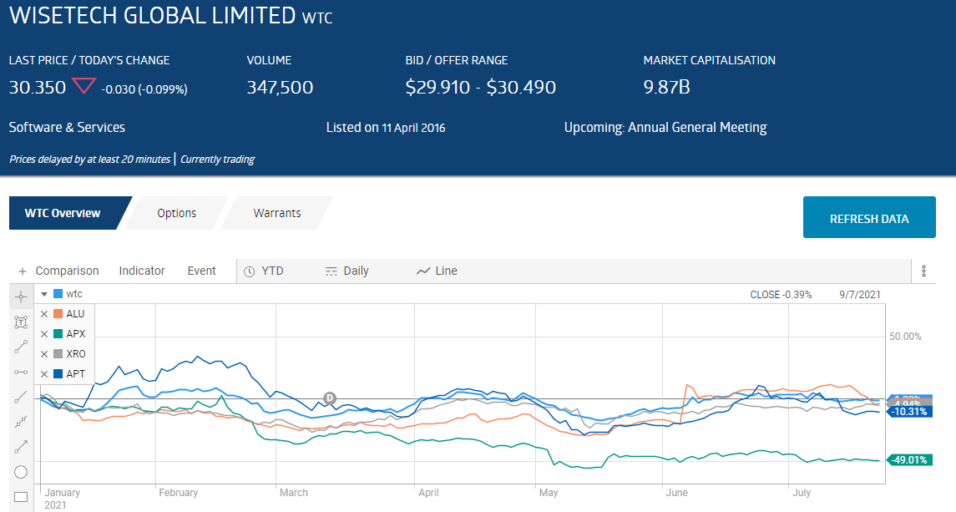 The report went on to show the ASX 200 gain for June of 2.3%, increasing the total return for FY 2021 to 27.8%. That seemingly stellar result badly trailed the performance of global markets, up 35.8%.

Fears of a resurgence of economic woes stemming from an as yet uncontained COVID 19 Pandemic are adding volatility to the still strong performance of US stocks, but the pandemic situation here in Australia with lockdowns rising appears more concerning at the moment than the situation in the US.

Fearful markets typically provide buying opportunities for investors with the stomach to tolerate declines. For the risk averse, Wisetech, Altium, and Appen all have double digit two year earnings growth forecasts. While Afterpay has yet to turn a profit and Xero’s FY 2021 profit is modest, both are growing revenues and Afterpay appears on the cusp of profitability, with a two year earnings per share (EPS) growth forecast in excess of 200%.

The following table includes some valuation and price performance metrics as well as growth history and forecasts where available. On 26 August, Appen shares reached an all time high of $43,66 following a strong Half Year 2020 Financial Results presentation. The company provides training data for the development and maintenance of the AI (artificial intelligence) programs of its customers.

Revenues rose 25% and underlying net profit after tax (NPAT) was up 34.3%, excluding $10.3 million dollar investments in growth initiatives. Appen reaffirmed guidance and yet the share price fell into a downward trend that continues to this day.

Investors that favor price ratios in their decision making should look to Appen as the clear choice among the WAAAX stocks.

Afterpay has yet to post positive earnings so the price to earnings and price to earnings growth ( which adds estimated future growth to the equation) are not available. Financial websites do not show P/E ratios for Xero. However, since both companies have assets that can be “valued” and are generating revenues, they do have price to book and price to sales ratios.

Afterpay remains the market darling of the red hot buy now pay later sector (BNPL) and looks to be ready to report positive earnings. However, the inherent risk cited by many analysts here is excessive valuation, along with increasing competition. The company’s P/B ratio of 30.42 supports the valuation argument, as does the P/S ratio. Price to sales calculates a company’s market cap against revenues over a given period.

The Appen share price dropped 13% within days of the release. One explanation offered by some market commentators was high investor expectations for growth stocks like Appen. The company committed a cardinal sin for a growth stock by not raising its full year guidance, despite the positive report and overall outlook reported by management.

Appen resides at the high end of high tech stocks, working on technology solutions not always easily understood. The company offers its customers a data annotation (explanation) platform that ‘provides the annotations, judgments, and labels needed to create accurate ground truth for their AI models.’

However, the company’s origins in language recognition software remains prominent today in applications well known to the public – Siri and Alexa. The company also offers speech to text writing programs, and translation services, via two operating divisions – Relevance and Speech and Language. Relevance provides data necessary to enhance the accuracy of search engines and social media and ecommerce search tools.

Although the romance may be fading, Afterpay remains the favorite of BNPL investors. The share price took a blow when arguably the biggest competitor of all announced its entry into the sector – Apple. The share price dropped but regained upward momentum in a matter of days. Afterpay remains a formidable player, but the question remains whether or not the profits that will surely come will satisfy the rabid appetites of its growth oriented investor base.

The company’s core offering is CargoWise, a cloud-based platform that tracks freight door to door, allowing all parties involved access to any point in the process.

The Wisetech share price was savaged at the onset of the pandemic as businesses around the world shut down and manufacturing declined. Half Year 2021 results released in late February pointed to a strong comeback, with revenues up 16% while underlying net profit rose 61%. Wisetech management increased its Full Year 2021 guidance, but investors appeared unimpressed as the share price continued its downward trend, interrupted by a brief rally.

The global cooling of tech stocks may be contributing to the volatility of the WTC share price and the rest of the WAAAX stocks as well.

The company now has software platforms to meet the needs of PCB designers of all stripes – Altium Designer, Altium Nexus, CircuitStudio, and CircuitMaker.

In October of 2018 the company launched Altium 365, billed as the world’s only cloud-based platform for integrating all phases and stakeholders in the PCB design process. The company is committed to expanding its cloud based presence, taking a step further with the 20 April of 2021 launch of another cloud-based platform – Nexar.

Altium has more than 5,000 companies and 11,000 users already using Altium 365. Nexar can connect “Altium 365 PCB design users and their companies with the software, suppliers, and manufacturers needed to transform ideas into smart & connected products.”

The company has been in the financial news almost daily of late as US giant computer aided design company Autodesk made an unsolicited bid for Altium. Based in the US, Altium has partnered with Autodesk in the past. Although the offer of $38.50 per share represented a 41% premium over the ALU trading price at the time of the bid, the Altium board immediately rejected the offer.

Speculation that Autodesk would come back with a better offer sent investors rushing in to buy ALU shares. On 18 July Autodesk ended the speculation, announcing there would be no further negotiating with Altium.

The company’s Half Year 2021 Financial Results showed the lasting impact of the pandemic as revenues declined year over year (4%) for the first time in eight years. Profit was down 12%. Management commented that Altium has “successfully pivoted to the cloud”, opening the door for achieving its growth targets of expanding from 52,000 subscribers to 100,000 and double its revenue to $500 million dollars by 2025.

New Zealand based Xero ends its financial year on 31 March. Full Year 2021 Financial Results were strong, despite pandemic induced weakness in the first half. Revenues rose 18% and the company posted a profit of $19.8 million dollars, up from $3.3 million in FY 2020. Total subscribers increased 20%, and earnings before interest, depreciation, and amortisation (EBITDA) rose 39%. Investors ignored the positive results and the stock sold off in the recurring global cold feet over the potential impact of rising inflation and interest rates on tech shares.

The company operates globally with a cloud-based online accounting platform for small and medium sized businesses, along with independent accountants and bookkeepers.

About four years ago someone in the investment community decided …