Opportunities in the Other Battery Minerals

A 4 March of 2022 article appearing on the Manufacturers’ Monthly website (manmonthly.com.au) began with the intriguing headline: Australian Battery Industry Could Be Worth $7 Billion by 2030.

The Future Battery Industries Cooperative Research Centre (FBICRC) claims federal government investments over the next five years via the Modern Manufacturing Initiative (MMI) could build the value of the Australian battery minerals sector to $7 billion dollars by 2030.

Skeptics surrounding the breadth and timing of the purported “EV (electric vehicle) revolution have largely fallen by the wayside in a tsunami of positive news favoring EV adoption. One of the most recent is the 22 July news of US-based Ford Motor Company reaching out across the globe to shore up its access to battery minerals crucial for the production of batteries to power EVs, most notably lithium.

Ford has plans to manufacture 600,000 EVs by late 2023 and 2 million EVs per year by 2026. The company is cutting deals with producers large and small, starting with Australia’s Rio Tinto (RIO). Ford and Rio have a memorandum of understanding (MOU) for Rio to develop supply chains of battery materials for use in Ford vehicles.

Of the two major components of a Li-ion battery – the anode and the cathode – it is the cathode where researchers are actively pursuing alternative technologies to improve shortcomings with existing technologies.

Cobalt is arguably the most controversial battery mineral due to its high cost and reliability as well as labor practices in cobalt mining. The Republic of the Congo is the leading producer of cobalt, but mining there makes use of child labor.

Much has been written about the efforts to replace cobalt, and now there is an alternative produced by Chinese battery maker Contemporary Amperex Technology Co. (CATL).

The Ford announcement included an agreement with CATL to provide its lithium iron phosphate (LFP) battery for use in select Ford vehicles. The LFP battery has emerged as a more cost-effective and supply availability to batteries that use Cobalt. Tesla has also announced it will be using this battery with its lower-end, short distance models.

Buried in the agreement was a statement that should give interested investors pause. Ford will continue using NCM (nickel/cobalt/manganese) batteries in its longer driving range models.

In addition to the driving range advantage offered by batteries using cobalt, the batteries last longer and are more stable.

The point for interested investors is that despite the abundance of articles in the financial and technological press, cobalt is not likely to go away anytime soon. A 28 October article appearing in mining-journal.com quoted a Benchmark Market Intelligence analyst stating the organisation is forecasting a 13% rise in compound annual growth rate (CAGR) to 2030.

Australian cobalt miners are looking to increase production, providing a more stable and ethical source for the world’s battery manufacturers. Cobalt is also used in aircraft engines and computers.

There is little question efforts to develop new battery technologies could disrupt existing practices, but investors who have been following the EV revolution have read countless breathless pronouncements of “next big thing” developments that have yet to bear fruition.

In the near term, it is highly unlikely the demand for cobalt will disappear, with ASX miners well-positioned to take advantage of global concerns about the DRC as the primary source. 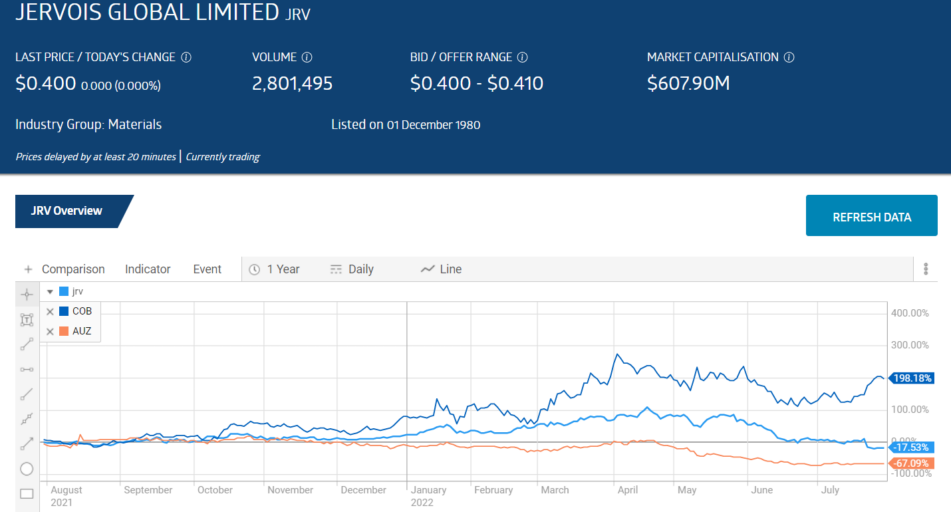 Cobalt Blue is the favorite of investors right now, largely due to the company’s Broken Hill Cobalt Project (BHCP) status as the only new cobalt mining development outside of Africa. The company self-describes Broken Hill as the only “pure play producing cobalt mine in the world.” Virtually all others produce cobalt as a by-product of nickel or copper mining.

Broken Hill had been on Pilot Plant status prior to the release of cobalt sulphate samples to potential offtake partners in the December Quarter. On 26 July Bloomberg reported the company had mined 2,300 tonnes of cobalt with the company now moving into a larger scale Demonstration Plant status, producing commercial scale samples for offtake partners during Q3 of FY 2022.

Cobalt Blue has a market cap of $264 million dollars and last traded at $0.82 per share.

Jervois Global has four cobalt assets, with Jervois Finland already producing cobalt sulphate, cobalt oxide, and fine cobalt powders for commercial and industrial use (including batteries) with sales offices in the UA, China, Japan, and Germany.

The company is developing what will be the only primary cobalt producing mine in the United States, at the Idaho Cobalt Operations (ICO). Jervois expects to commission the ICO facilities in September of 2022, with first ore produced by October and full production commencing in February of 2023.

In 2020 Jervois acquired the São Miguel Paulista nickel and cobalt refinery (SMP) in Sao Paulo Brazil for restart from care and maintenance status. SMP is the only refinery in South America to employ electrolysis in metal refining. The refinery will give Jervois the capacity to offer customers in a range of industries – from “specialty stainless steels, nickel and cobalt superalloys, cathode precursor,’ and lithium ion battery and electric vehicles manufacturers – a variety of refined nickel and cobalt products.

The company also has a nickel/cobalt project under development in New South Wales – the Nico Young project, with infrastructure nearby from road and rail to power and natural gas.

Jervois has a market cap of $608 million dollars and last traded at $0.40 per share.

Australian Mines wholly owns its flagship asset – the Tier 1 Sconi Project in Queensland. Sconi is in the feasibility study phase, with an offtake agreement already in place with Korean based global EV battery manufacturer LG Energy Solution. The six year agreement calls for LG Energy to buy the entire production of the company’s nickel/cobalt hydroxide for refinement into battery grade quality.

Sconi’s projected thirty year mine life will benefit from a single site production operation for both mining and processing ore into advanced battery precursor chemicals as well as putting the project in the lowest cost of production quartile.

Australian Mines has two other promising projects in early stages of development – the cobalt-scandium-nickel-copper-gold Flemington Project in New South Wales and the nickel sulphide Lennard Project in Western Australia.

Despite the strength of the Sconi Project as described by the company, an entitlement offer to raise capital fell short. The company has applied for an extension. On 29 June Australian Mines announced LG Energy had agreed to amend a financing condition in the original agreement with an extension to meet the financing condition by 31 December of 2022.

The Australian Mines CEO resigned in May of 2022 and the interim CEO in a 28 July announcement to the market “has made a strategic shift, focusing now on securing funding from several potential equity sponsors.

Australian Mines has a market cap of $34 million dollars and last traded at $0.07 per share.

Investors looking for what could be the next development to replace cobalt might consider investing in what some experts say is the metal most likely to succeed in the quest to bump cobalt from the picture – manganese.

A 14 May 2022 article in autoevolution.com pointed to manganese being the “next big thing” in battery development, citing both Tesla and Volkswagen as their sources. Both companies have expressed their preference for manganese over cobalt. Aussie investors have a relatively safe choice here with South32 (S32), the world’s largest manganese miner.

Manganese is low cost, readily available, and in conjunction with reduced nickel content could prove a step-up competitor to the LFP batteries. Top of the line EVs would require greater nickel content but would also eliminate cobalt.

The company is aggressively shifting to more carbon neutral operations, fully divesting its thermal coal assets while acquiring copper assets and expanding its “green aluminum” operations. The COVID 19 Pandemic hit the company hard, but Half Year 2022 Financial Results showed a strong comeback. Underlying revenue rose 32% and net profit after tax was up 1,837%.

Opportunities in the Other Battery Minerals

A 4 March of 2022 article appearing on the Manufacturers’ …