Speculation about the potential explosion in the demand for electric vehicles (EVs) in the midst of the last decade saw the prices of some of the metals needed to produce the batteries capable of powering those vehicles more than doubling by 2018. Lithium, nickel, and cobalt led the charge, but when the speculation appeared to have arrived early on the scene, the price of lithium and cobalt began a downward slide that would not be reversed until late 2020.

In the face of the expectation of rapidly rising demand, commodity producers do what they do best – produce more and more, leading to an excess of supply and downward price movement when expectations slip off into an uncertain future. In this case the move was accelerated by mining shutdowns and slowdowns in the face of the pandemic.

For the EV revolution to reach its full potential, the cost of an EV must become competitive with comparable ICE (internal combustion engine) vehicles. EV producers and other corporate consumers of li ion batteries are continually looking for more cost effective battery chemistry formulations.

Tesla began with the Nickel/Cobalt/Aluminum (NCA) formulation, adding the NMC and now the LFP – lithium iron phosphate, or lithium ferrophostate.

There is no nickel or cobalt in the LFP battery, so newcomers to this sector might wonder why the prices of nickel and cobalt are not sliding if manufacturers are screaming for lower costs?

The nickel/cobalt formulations still offer some advantages over the LFP battery, most notably range and higher energy density, meaning better overall performance. Tesla is using the LFP battery on entry level models and will expand its use to all “standard” range models. Where distance and performance issues like acceleration matter, Tesla will continue using the NCA formulation, for now, but plans to expand LFP use in the future. Ford and VW also have begun using LFP batteries.

China is leading the way in LFP battery adoption and the LFP market share there has risen in concert with manufacturer cost concerns.

In addition, manufacturers are now getting more directly involved in mining and battery chemistry formulation. Multiple manufacturers are securing offtake agreements with producers of both cobalt and nickel to guarantee supply.

The debate over the advantages and disadvantages between LFPs and NCAs or NMCs rages, with an edge slipping to LFPs. Global resource research firm Wood Mackenzie is predicting li ion battery manufacturing capacity will increase fivefold by 2030, but that LFP’s total market share will eclipse the fifty per cent market share currently held by NCM batteries by 2028. The company pointed to LFP market share gains in 2021 through its lower cost, longer battery lifecycle, and better safety. Should that prediction materialise, what would happen to demand for Cobalt?

Other experts maintain a positive outlook for cobalt. The following graph is from Bloomberg New Energy Finance, assisted by Darton commodities: 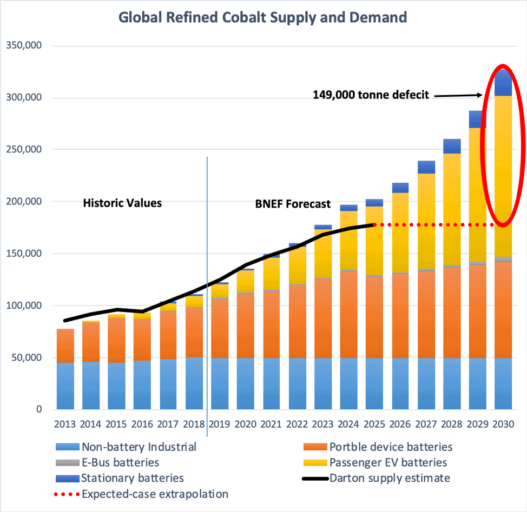 Darton Commodities is a UK based cobalt metals expert, providing procurements and marketing as well as financing and research assistance. Here is their outlook and the supply/demand balance for Cobalt: 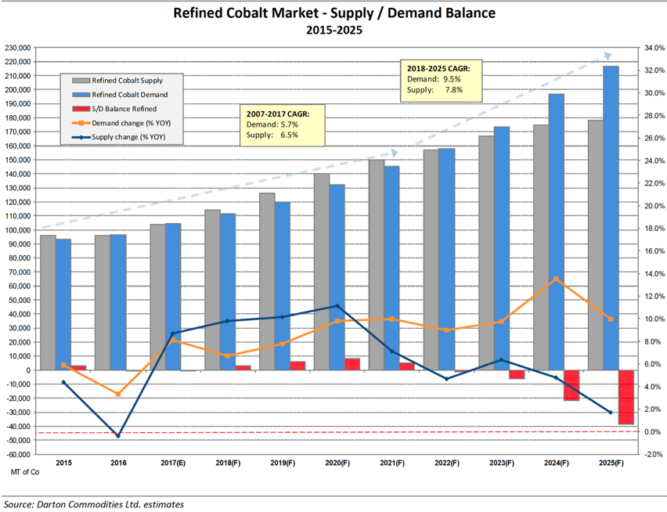 According to Benchmark Intelligence 2021 saw LFP dominate the China market. However, a Benchmark analyst told investingnews.com those investors fearing the demise of cobalt are premature. The analyst had a simple explanation. LFP batteries are dominating the China market, where people want and need small, lightweight cars. Performance capabilities such as acceleration, high speeds, and greater range are not significant issues. The US market trails the world in EV adoption. In 2021 3.4 million EVs were sold in China while 608 thousand EVs were sold in the US. Small cars there are becoming almost obsolete in favor of the fondness Americans have for Sport Utility Vehicles (SUV). The thinking is the demand for bigger and more powerful cars that can go further faster will prop up demand for cobalt.

The LFP cost advantage could lead to the lower priced EVs experts have claimed for some time were needed to kick start the EV revolution into high gear. However, without better overall performance in range and acceleration required by many drivers, their market share could be more limited than some experts claim. Safety is another major advantage for LFPs, but low tolerance for cold temperatures makes them less suitable for northern climates.

Battery chemistry is constantly changing so the two competitors might both hold market share at their respective ends.

Cobalt is rarely mined directly, with around 98% of cobalt produced as a by-product of nickel or copper mining. The downside is cobalt’s dependence on a robust price of nickel and copper.

Although cobalt is essential for fire safety in NCA batteries, major manufacturers have long had concerns about its use, beyond its high cost.

First, somewhere around 70% of the global supply of cobalt comes from the Democratic Republic of Congo (DRC), presenting potential “country risk.” Although the country is rich in natural resources, poverty is high, and child labor is common. In response to concerns about child labor, the DRC has pledged to end the practice by 2025.

Jervois Global describes itself as a “global supplier of cobalt and nickel.” In addition to its mining assets, the company has a production facility in Kokkola, Finland that manufactures cobalt powders for electric batteries and other industrial applications. Jervois is also acquiring a shuttered nickel and cobalt refinery in Brazil.

The core mining asset is the wholly owned Idaho Cobalt Operations (ICO), acquired in 2019. With construction well underway, the company states first production by August of 2022 and full commercial production by December of 2022. When fully operational ICO will be the only cobalt producing facility in the United States.

In mid-2021 Jervois acquired another refining facility – Freeport Cobalt – also in the United States. Freeport is a joint venture, between US based global miner of multiple commodities — Freeport-McMoRan (NYSE: FCX) – and Canada based Lundin Mining (XSTO: LUMI).

Jervois also has a nickel/cobalt asset in New South Wales in development – the Nico Young Project. The company has what it calls “non-core” mining assets in Canada, Uganda, and a JV (joint venture) near the border between Western Australia and the Northern Territory.

Cobalt Blue’s sole focus is cobalt. Not just the mining and refining of cobalt, but also focusing on the technology needed for advancements in both refining and mining.

The company’s sole core asset is the Broken Hill Cobalt Project. Within the broader project, two sites – Pyrite Hill and Big Hill – have a history of past cobalt mining. The company claims resource estimates will extend beyond the two into the Railway site and multiple other prospective sites.

Cobalt Blue sees itself as unique among cobalt miners due to is processing technology. Each stage of the refining process itself is already in use around the world. What is unique is the “book end” nature of the process, combining processing steps from beginning to end in a single location.

Using small ore samples the company successfully tested the process in its own Pilot Plant and moved on to construct a commercial scale Demonstration Plant. The plant is targeted to be operational in late April. The Pyrite Hill site will mine 3,500 to 4,000 tonnes of ore to be processed at the Demonstration plant over a twenty week period.

Both Cobalt Blue and Jervois point to their mining operations as employing “ethical practices.” Companies and governments are increasingly looking for cobalt supply outside the DRC and Australia stands to benefit.

Australia and the United States have begun a “Strategic Economic Dialogue” focusing on critical and rare earth minerals. The Australian delegation led by the Minister for Trade, Tourism, and Investment met with the US Secretary of Commerce and CEOs of major critical minerals businesses.

The stock of Jervois and Cobalt is catching a ride on the coattails of the rising price of cobalt. 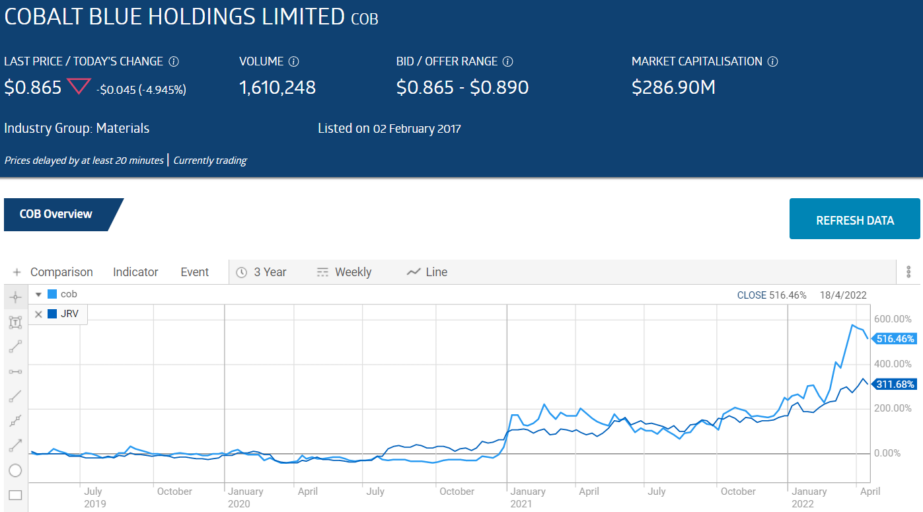 Market participants are notorious for “shooting first and asking questions later.” Although neither company suffered much in 2021 as the LFP alternative began to grab market share and worry investors, it is possible all cobalt and nickel stocks will be hit by major positive developments in the future.

There are junior miners of interest, if for no other reason than the possibility of acquisition. While many are multi-commodity miners looking for copper and nickel as well as cobalt for global use, a newcomer spun out by Vulcan Energy (VUL) in August of 2021 – Kuniko Limited (KNI) – is strategically targeting the battery minerals needs of Europe.

With a market cap of $72 million dollars according to the ASX, and extreme trading volatility since listing, speculative investors seem to have abandoned the company while more mainstream investors are enamored with other ASX cobalt miners.

The company intends to meet European guidelines for eliminating the high carbon footprint from traditional mining of nickel, copper, and cobalt. Kuniko has five licensed exploration areas in Norway. The target is zero carbon. Shortly after listing the company began exploration activities focusing on the Skuterud Cobalt Project and the copper projects in two other exploration areas – Vangrofta and Undal-Nyberget.

While a zero carbon goal may seem unrealistic to some, Norway derives 95% of its energy from renewable sources, eliminating the high carbon footprint of electricity generated from fossil fuels used by many miners.

Speculation about the potential explosion in the demand for electric …