Oil and Gas Stocks – Buy or Wait and See?

The opening presentation at the Davos 2022 World Economic Forum beginning on 26 May confirmed the obvious – we are in the midst of an energy crisis, global in scope.

Some investors can recall the disruption caused by the oil crisis in the mid 1970’s. This one is different. Added to the dramatic increases in the price of oil we have similar price escalation in natural gas and coal.

The obvious culprit is the start of the war in Ukraine in late February. Simply put, the world needs to replace the oil and gas lost in the chaos of war. However, global supply was already falling as the COVID 19 Pandemic global lockdowns saw dramatic drops in demand, with producers responding by a series of cost cutting measures, including closing oil rigs. With COVID 19 coming under control with the current exception of lockdowns in China, demand was returning before the war.

At the Australian Petroleum Production and Exploration Association (APPEA) industry conference in mid-June, the CEO of ASX listed oil and gas producer Santos Limited (STO) was quoted in The Australian claiming the global push to achieve net zero emissions contributed to a “moratorium” on exploration and development.

The situation in Europe is especially critical, as the push there for renewable energy sources from both consumers and companies led to investments in new oil and gas sources hitting record lows.

Investors who have been following both fossil fuel and renewable energy sources know two of the world’s largest oil producing companies – Royal Dutch Shell and BP -both have announced to their investors increased investments in renewables and declining investments in oil sources.

A September 2020 article appearing in the Australian Financial Review (AFR) stated Royal Dutch Shell was “looking to cut up to 40% off the cost of oil and gas” to conserve cash for investing in renewable energy and other ventures.

The Shell news followed multiple news outlets reporting in August of 2020 that BP planned to reduce oil and gas production 40% by 2030 while investing “billions” into clean energy sources.

The picture in short is a story repeated in virtually all commodities – the world finds itself in a situation of too much demand chasing too little supply.

The prospects for increasing supply in the short term are bleak at best, as it takes time to restart production, with the situation worsened by shortages of labour and drilling equipment and supply chain disruptions.

All of this suggests investing in oil and gas stocks over the short to medium time frame is worth consideration. The ASX does not lack for impressive oil and gas companies. The following table includes price performance and historical and future financial performance metrics for the top four ASX oil and gas producers. 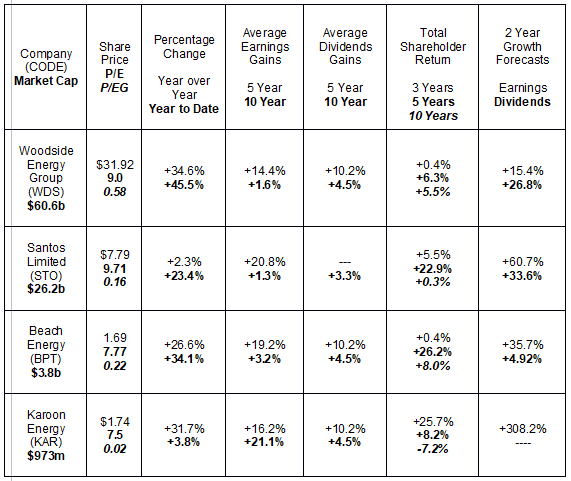 The outlook for oil and gas stocks blurred of late as the rush of central banks around the world to raise interest rates to combat inflation has increased recession fears. Although some industry experts and analysts seem less concerned about the impact on the sector, Citi is on record stating oil prices are overvalued due to recession concerns.

The one month price movement for Brent Crude Oil seems to confirm the concerns expressed by analysts at Citi, should the downtrend continue.

From the US financial news website CNBC.com here is a one month price movement chart for Brent Crude. 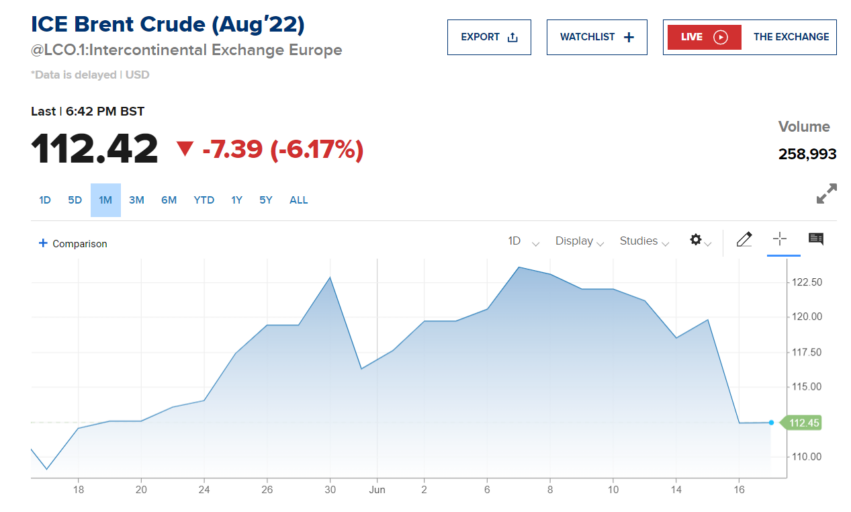 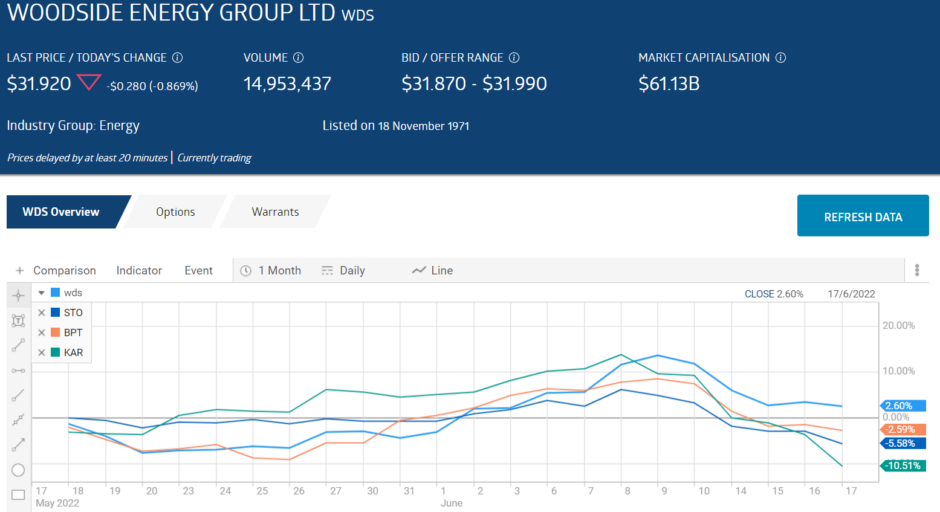 Global markets have their collective eyes fixed on the situation in the US, as throughout investing history, recessions in the US have spread around the world. The US economy is driven by consumer spending, making the rising inflation there a major concern. Add to the wall of worry the very real possibility of the US Federal Reserve’s response – raising interest rates – becoming too aggressive, choking off the economy with interest rates propelling the cost of borrowing beyond the reach of consumers and companies.

An article appearing here on thebull.com.au on 18 May of 2022 extolled the spending habits of US consumers, fueled strong purchasing power. An 8 June article appearing on the website of US based credit rating agency Fitch threw cold water on the recession argument, stating fears of inflation are not expected to impact the near term positive growth for household income and consumption in the US.

The IEA (International Energy Agency) lowered its forecast for oil demand for the second quarter, but year over year sees an increase in demand of 1.8mbillion barrels per day, rising to 2.2 mb/d in 2023.

Risk averse investors might not see oil and gas stocks as a buying opportunity right now, but those with risk tolerance should be impressed by the positive two year earnings growth forecasts and low valuation ratios for all four of these companies.

Woodside Energy opted to change its name to reflect the times in which we live, where energy as a whole merits attention, not a single energy component. Woodside Energy Group graduated into the ranks of the world’s top oil producers when it assumed control of the oil assets of BHP Group (BHP).

The company was hit hard by the COVID 19 Pandemic, with FY 2019 reported revenues of $7.1 billion dollars falling to $4.7 billion in FY 2020. Profit fell from $489 million in FY 2019 to a loss of $5.1 billion in FY 2020. The company closes its books at the end of December. The Full Year 2021 Financial Results announced in February of 2022 showed both revenues and profit topping pre-pandemic results. Reported operating revenues for the year were $6.9 billion dollars while reported profit was $1.9 billion.

The newly named company will maintain its traditional revenue producing pillars of oil and gas while expanding into “new energy” projects. The company has 30 assets around the world, from Australia and the Americas to Africa.

Woodside has operating oil assets in the Gulf of Mexico with expansion plans and potential new developments. The company’s African asset in Senegal is under construction with first oil expected in 2023. The company’s LNG (liquefied natural gas) assets in Australia include Browse, Sunrise, Pluto, North West Shelf, and Wheatstone.

Woodside is expanding LNG (liquefied natural gas) production at its existing Pluto and Scarborough operations. New Energy projects include hydrogen, ammonia, and solar developments here in Australia and in the US.

Woodside intends to lower its carbon footprint with an “aspiration” of reaching net zero by 2050. The company is committed to ESG Environmental, Social and Governance standards and has already begun a five year “social investment” strategy.

Santos Limited acquired the assets of former rival Oil Search Limited in December of 2021, adding that company’s significant LNG presence in Papua New Guinea. With the loss of Russian gas plaguing Europe, Australian LNG exports from both Woodside and Santos are likely to increase. Santos is a major LNG player with LNG operations in the PNG LNG, Gladstone LNG, and Darwin LNG operations. The company also has oil and natural gas assets in the Cooper and Carnarvon Basins in Australia. In addition to its extensive portfolio of producing oil and gas assets, Santos is developing technologies for carbon capture and storage, with three CCS projects underway. The company has a climate transition strategy in place, with a “roadmap” for achieving net-zero emissions by 2040.

Like Woodside, Santos saw both revenues and profit dropping in FY 2020 and rebounding strongly in FY 2021 – with net profit after tax up 284% and total revenues up 39%.

Beach Energy’s share price, like the price of the other three oil and gas companies, is being driven by the rises and falls in the price of Brent Crude, although Beach did reach an all-time high on a market down day.

The company’s financial reporting follows the fiscal year ending in June so Full Year 2021 Financial Results will not be available until August. Half Year 2021 Results saw a 66% increase in NPAT, but the company missed analyst estimates on earnings per share and EBITDA (earnings before interest taxes depreciation and amortisation.)

Beach Energy has substantial oil assets in the Cooper Basin, making the company Australia’s largest onshore oil producer. The company has multiple oil and gas assets in five basins in Australia and New Zealand and is planning to jump into the global LNG market.

Beach is in a 50/50 joint venture (JV) with an Australian subsidiary – Mitsui E&P Australia (MEPAU) – of global Japanese conglomerate Mitsui Co. The project’s Waitsia Gas Project Stage 2 will begin shipping LNG in the second half of 2023 through the LNG infrastructure at the North-West Shelf Project. Beach has an existing contract with BP Singapore to buy the entire LNG output from Waitsia – 3.75 million tonnes. The addition of the LNG export market will raise the company’s target markets to five, including gas supplies to both coasts of Australia and oil globally.

Karoon Energy has five oil and gas assets – two here in Australia as well as one in Brazil and one in Peru. The company has an extensive history of exploration, but since 2020 has turned to moving into more production, with oil as a primary focus.

In 2020 the company acquired the Bauna oil project off the coast of Brazil, with the first oil shipments in December of 2020. Karoon now claims its exclusive focus is oil production, targeting the Santos Basin in Brazil. With a second Brazilian project in the works, the company expects to more than double oil production by early calendar year 2023.

Karoon has a strong balance sheet and anticipates opening a second producing operation, either through acquisition or further development of one of its existing assets. The company is in the midst of a formal Strategic Refresh, including a review of the company’s ESG practices. In FY 2021 Karoon reported its first profit of USD$4.4 million dollars ($33.4 million in underlying profit). The two year earnings growth forecast suggests analysts believe Karoon’s growth projections are realistic, as the reported earnings per share (EPS) of $0.048 per share in FY 2021 are expected to jump to $0.803 by FY 2023.

Oil and Gas Stocks – Buy or Wait and See?

The opening presentation at the Davos 2022 World Economic Forum …