In much of the world it appears many finding themselves in “stay at home” environments looked to fill their time with more than digital entertainment. Market experts have noted a wave of new investors who turned their spare time to more productive use — investing in equity markets.

Researchers tell us the trend was already in sway prior to the pandemic, but lockdowns opened the flood gates further. Whether via social media or more traditional investor education websites, these new investors looked for insight into the world of investing.

Financial results announcements represent one of two types of market news – scheduled. The second is the unexpected. Investors wake up one morning to learn of some calamity somewhere sending markets crashing or a new mining discovery or technological innovation.

In a rational world, navigating the news to guide the buy/hold/sell decisions investors face would be a simple matter of separating the positive from the negative. Positive news would be a signal to take some profit and wait to buy more after some negative news drives down the price. Negative news for those who believe the herd knows best is a signal to get out.

Sad to say, markets are far from rational. Most investors learn the law of supply and demand drives stock prices and it is demand for the stock, not the company, that is in play. So the key to navigating news is gauging market perception because it is market sentiment about the news, not the news itself that drives the price up or down. 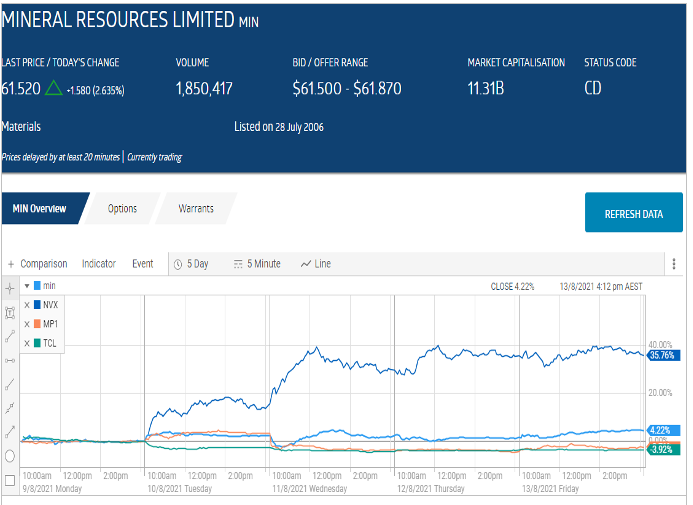 Obviously, the unscheduled news that multinational US based energy company Philips 66 was taking a 16% stake in NOVONIX, an Australia based battery materials and technology company resulted in a lasting boost in the share price. The CEO of Philips 66 had this to say about this strategic investment:

One explanation is inherently simple and critical for all investors learning to navigate news announcements. The remaining three companies were giving investors news of the past, while the NOVONIX announcement was about the company’s future and displayed the confidence a global energy powerhouse has in NOVONIX. In addition, NOVONIX operates in one of the hottest sectors on the planet right now.–

NOVONIX listed on the ASX on the last trading day of 2015 and the share price is up more than 1500% since. The company added work on battery technology to its graphite mining business model, changing its name from Graphitecorp to NOVONIX.

Some terms borrowed from other disciplines can provide a useful framework for navigating news – signal to noise, and false positives and false negatives.

“Signal” in news refers to anything that can impact the fundamental performance of the company, from its own technology to industry trends. “Noise” is news that does not have such an impact.

A “false positive” suggests a positive market reaction to the news may be inaccurate, or “false”, while a “false negative” suggests the opposite.

In many cases, false positives and negatives are buried within the full text of the financial results presentation, but often overlooked by investors. Strong guidance, upgraded guidance, and downgraded guidance are often included in the release.

Transurban is a case in point. The company is a developer/builder/operator of toll roads here in Australia and in the US and Canada. Transurban also “researches and develop innovative tolling and transport technology that makes travel easier for everyone”, according to their website.

With lockdowns and stay at home orders here and in the US and Canada, Transurban toll roads took their first hit in Q4 of FY 2020, with revenues dropping 23% and profit slipping from $171 million dollars in FY 2019 to a loss of $111 million in FY 2020.

For FY 2021 revenues dropped another 9% and the company posted a $287 million dollar loss from continuing operations.

While diversified mining and mining services provider Mineral Resources saw its share price quickly recover after an initial decline, Transurban and Megaport seem to have been judged by market participants to be in the “negative”, at least for now.

Transurban’s dismal FY 2021 financial performance, the new lockdowns in Australia, and growing concerns in the US seem to indicate the share price decline is not a “false negative.”

However, buried in the release was the statement that average daily traffic (ADT) in Australia had begun to improve prior to the recent lockdowns and has been up in the US as well. The company also sold off 50% of one of its US holdings, leading to a net profit for the year of $3.3 billion dollars when the one off asset sale is included. In short, Transurban has a substantial portfolio of new projects and a strong balance sheet to pursue them. The company reduced its debt load and opened new debt facilities during the year as well. Analysts have a 2 year earnings growth forecast for the company of 48.5%.

The company has grown revenue in each of the last three fiscal years, rising 35% in FY 2021, but remains unprofitable. The FY 2021 loss was $55 million dollars, slightly

Megaport was founded in 2013 with a vision of creating a software defined networking (SDN) platform opening the door to “elastic interconnection services.”

The list of partnering companies is impressive, giving its customers the flexibility to connect with major cloud providers like Microsoft Azure, AWS (Amazon Web Services), IBM Cloud, Oracle Cloud, Alibaba Cloud, and others. There are more than 700 enabled data centres around the world available to Megaport customers.

Included in the financial release was a bit of unexpected news – the acquisition of a US-based company working on improving cloud infrastructure. After an initial lift, the stock cratered the day after the release, perhaps at the $15 million dollar cost of the acquisition.

The negative reaction might turn out to be “false”, given the company’s growth record and the 2 year analyst earning growth forecast of 47.2%.

Mineral Resources reported stellar Full Year 2021 Financial Results after the ASX closed on 10 August. Virtually every metric was up. The following morning the share price took a dive before recovering by the end of the day.

Shareholders of Mineral Resources have ownership in a diversified entity within the mining sector. The company ranks as the fifth largest iron ore producer in Australia and following its decision to get into the lithium sector it is now the fifth largest lithium miner in Australia. Management claims its broad array of mining services remains the company’s crown jewel.

The company provided an investor presentation to accompany the financial results, devoting an entire section to its future growth endeavors, including expanding both its iron ore and lithium production capability. In essence, Mineral Resources offered its investors both a detailed look at the past and the future.

The following table lists some price movement, growth, and historical performance information for the four companies.

In much of the world it appears many finding themselves …