On many a morning investors around the world awaken to find the price of stocks they own or of stocks in which they have interest has moved dramatically, up or down.

There always has been an aura of mystery surrounding share market trading as much of what happens seems to defy explanation, something akin to the invisible hand guiding capitalist economic systems. In an attempt to clarify or add some respectability to what many see as nothing more than glorified gambling, some market experts have introduced terms common in the world of physical sciences to stock trading.

From chemistry we have assigned the term “catalyst” to anything that produces a significant reaction in stock price movement. The fit is not perfect, as chemistry defines a catalyst as “a substance that speeds up a chemical reaction but is not consumed by the reaction.” The catalyst is the chemical substance that drives the process of catalysis, speeding up a chemical reaction while not being consumed in the action preserving its ability to continue to act as a catalyst

However, the term has gained acceptance in market parlance, with analysts and experts alike offering advice on potential catalysts for a given stock or sector. The catalyst is “released” or introduced into the market in the form of news.

Stock catalysts can relate to a particular company within a sector; to the sector as a whole; or the economic picture in a given country or the world at large. In world of the physical sciences like chemistry the reaction to the catalyst can be measured with contributing factors becoming more predictable.

In the share market world, not all catalysts are created equal, as reactions can vary in surprising ways. Common sense tells you a positive financial results news announcement should be a positive catalyst. Common sense can be wrong here as many investors throughout history have watched in stunned surprise when a treasured holding reports double digit increases in revenue and profit, but skimpy forward-looking guidance sends the stock price the wrong way.

The “signal to noise ratio” is another concept adapted from the world of engineering to help investors discriminate between news items that matter – signal – from news matters that don’t – noise. It doesn’t take a newcomer to stock market investing long to run across expert advice cautioning them to beware of “noise” in news announcements where noise is defined as useless information.

However, the perception of signal, or what is useful information, varies with investing approach. A bargain hunting value investor may see a news item as noise while a rabid growth investor would see the same item as signal.

Since the dawn of stock markets there has been a steady stream of attempts to “quantify” trading in order to elevate equity investing from art to science. The signal to noise distinction got a boost from a 1986 article appearing in the Journal of Finance by economist Fischer Black. Black augmented the view of noise as useless information when the information has yet to happen. Under that view, uncertainty about future conditions remains noise, not a signal to buy or sell.

While news items can and often do have a catalytic effect on stock prices, their predictive power as signals remains questionable at best, in many cases falling far short of the applications in the physical sciences they are intended to emulate.

To illustrate we have only to look at recent stocks making the news.

Our first example, however, is a case where the news appears to provide useful information; a clear signal to act, depending on one’s investing approach.

On 17 January of 2020 provider of crop protection products to the global agricultural sector NuFarm Limited (NUF) made another in a series of profit warnings attributable to continuing extremes in climatic conditions, from droughts to bushfires. Many investors interpret this news as signal, not noise, since instances of extreme climactic conditions over the past decade can be seen around the world. Others see climate conditions as natural, lacking scientific evidence they are becoming the norm rather than the exception. Yet the NuFarm stock price over the past five years does not reflect investor certainty regarding the predictive power of extreme climactic conditions, with the share price rising and falling multiple times. 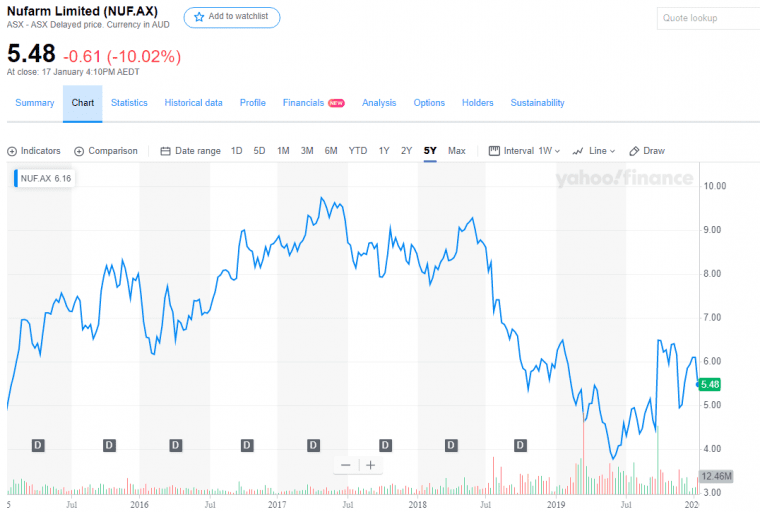 In our next example a US based payment platform provider listed on the ASX – Sezzle Incorporated (SZL) saw its share price leap over 20% in what would appear to be a clear indication most investors viewed the company’s announcement of receiving a direct lending license from the state of California as signal. 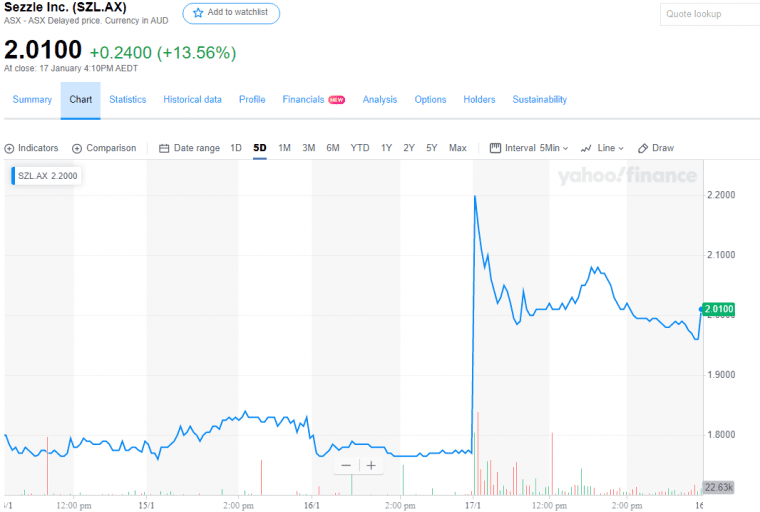 The company operates a “buy now pay later” platform. Prior to being granted the license to operate as a direct lender in California, Sezzle used the retailers as a “middlemen” between consumer and lender, with the retailer providing the loan and then transferring the loan to Sezzle for servicing.

In some cases, the official ASX release from the company includes the kind of useful information qualifying the news as signal rather than noise – impact on revenue and profit – not found on all financial websites.

In this case, the official company announcement had nothing to add. Here is the statement from the Sezzle CEO:

While the news proved to be catalytic in the immediate, there is nothing in the announcement allowing investors to judge how the change will improve Sezzle’s revenue and profit, and as such, could be seen by some longer-term investors as noise. Active traders and momentum investors interpret the news differently, acting on the signal in anticipation it will be catalytic and drive up the share price.

In late October of 2019 another US tech company listed on the ASX – provider of software based intelligent workplace solutions LiveTiles Incorporated (LVT) – had seen its share price retreat from a 52 high of $0.61 in early April to $0.27. 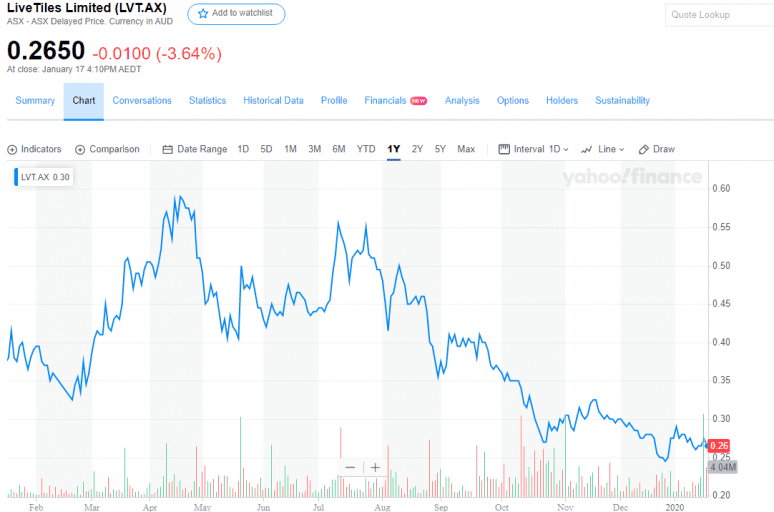 The company listed on the ASX via a reverse merger in 2015 and has yet to show a profit. On 20 November the company expanded its already global footprint deeper into Europe with the $19 million dollar acquisition of Swiss-based CYCL, a complementary provider of intranet (networks within an organisation) workforce solutions. Despite the opportunity to direct sell LiveTile offerings to CYCL customers and that company’s $14.1m revenues generated through 1 September, the share price dropped slightly.

The move was too small to be considered catalytic but represented a clear sign market participants were less than excited on the news. This was LiveTile’s second major acquisition of the year and it is likely some investors saw the acquisition costs slowing the company’s ARR (annualised recurring revenue) growth.

On 16 January the company announced to the market 130% ARR growth in the past year, and ARR expanding more than seven times over two years, buffeted by $4.7 million in growth booked since the completion of the CYCL deal in early December. The following graph from the LiveTile’s press release shows that two-year growth. 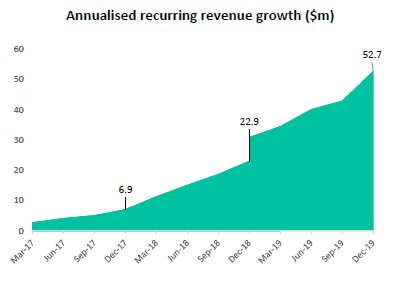 Perhaps the best evidence we can offer to be wary of relying heavily on concepts imported from the physical sciences is this – the impact can be fleeting at best.

The immediate reaction to the positive news was an upward spike in share price, which evaporated in 24 hours. 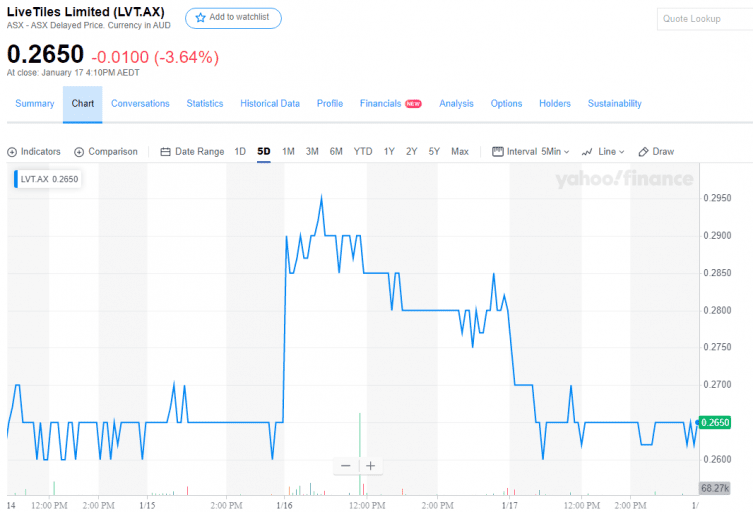 On many a morning investors around the world awaken to …