The ASX Minerals and Mining Sector (XMM) has defied year to date malaise, rising about 8% as of 14 February.

Financial news outlets are featuring article after article extolling the future of Australian resource companies, especially those involved in mining the metals and minerals vital for the manufacture of EVs (electric vehicles.)

After years of what many skeptics would consider excessive hype on the EV global market, the numbers are beginning to make the case that the EV revolution has started.

German market and consumer data research company Statista came out with an article on 15 February, heralding the doubling of sales of EVs around the world. The following graph is from the article: 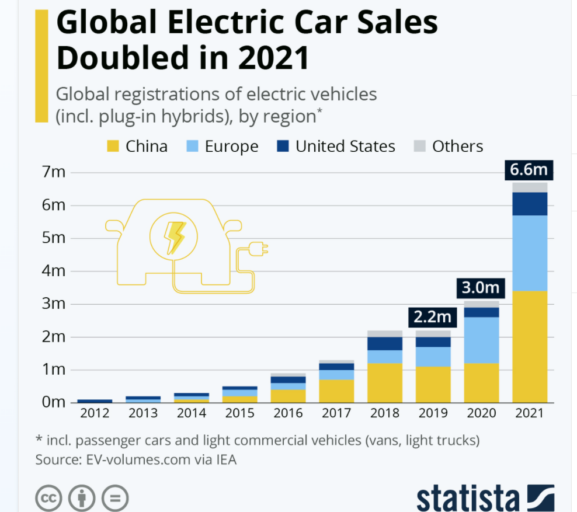 While nickel, cobalt, manganese, and graphite all have their place in production of the lithium-ion (Li ion) batteries required for EVs, it is lithium that has investors beating down the doors to get in on the expected boom.

However, year to date, it is the junior miners nearing production or holding growing resource base estimates leading the way, not the major players on the ASX – Pilbara Metals (PLS) and the newly formed company from the merger of Galaxy Resources and Orocobre, Allkem Limited (AKE). The following share price movement chart from the ASX website compares the price performance year to date of the big players against some promising newcomers – Global Lithium Resources (GL1) and Core Lithium (CX0) 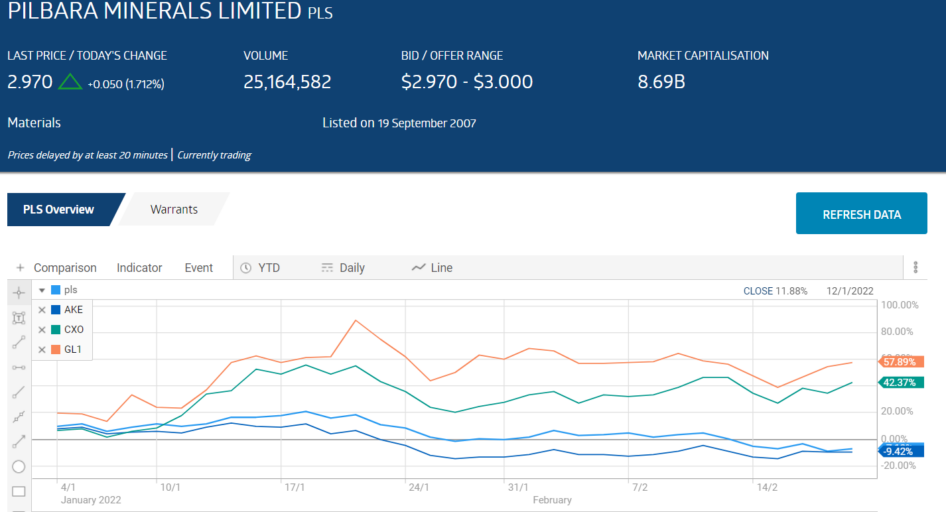 Global Lithium Resources has two lithium projects in Western Australia – the wholly owned Marble Bar Lithium Project and the very recently acquired Manna Lithium Project. Global acquired an 80% majority ownership in Manna in December of 2021. On 18 February, the company announced the maiden resource estimate for Manna would double the company’s lithium resource base.

Yibin Tianyi – a major supplier of lithium hydroxide to the largest EV battery manufacturer on the planet, China’s CATL (Contemporary Amperex Technology) – became a shareholder of Global Lithium for the purpose of fast tracking exploration and development in 2022. Global Lithium has drilling campaigns throughout 2022 on both projects.

Core Lithium is the sole owner of the Finniss Lithium Project in Darwin. While the company is still in a drilling campaign, management expects production to commence later in 2022. The company has an additional lithium project in development as well as copper, lead, and zinc projects.

Given the uncertainty present in the world today, ASX gold miners are also doing well, but Australia is recognised as the largest producing country for iron ore in the world. Year to date, the major Aussie iron ore producers are suffering from uncertainty over the price of iron ore.

2021 was a banner year for iron ore, until it wasn’t. China has been driving the price of iron ore for more than a decade to meet its appetite for steel needed for construction projects. With the price of iron ore at a record setting level of USD$237 per tonne in May of 2021, China announced it was reducing its steel production. Oversupply issues from ramped up production in both Brazil and Australia contributed to the slaughter, before the price bottomed out at about USD$85 per tonne, with some commodity watchers claiming, yet again, the boom was over. As of 17 February, the price reached USD$143.88, up 29% year to date. From marketsbusinessinsider.com: 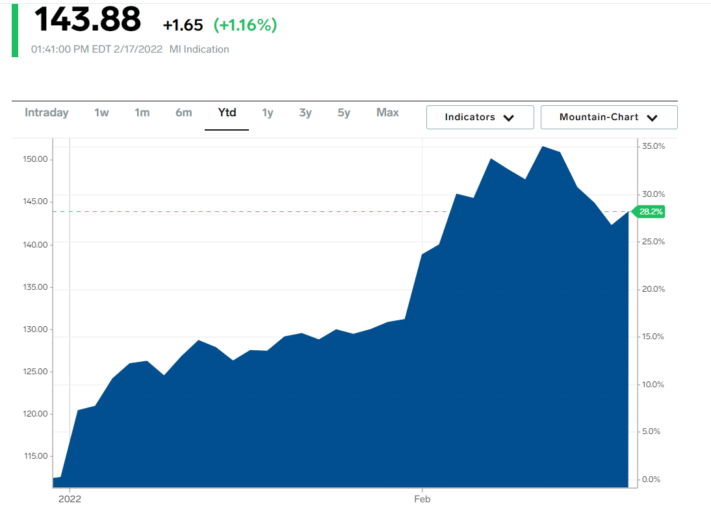 There is speculation China will increase its steel production when the Olympics ends, reducing that country’s needs for better air quality.

Fortescue Metals Group (FMG) is the only “pure play” iron ore producer on the ASX. As a possible inducement to investors looking to capitalise on the push to lower the global carbon footprint, Fortescue has established a “green iron ore” unit – Fortescue Future Industries (FFI) – intended to decarbonise iron ore production and distribution to its customers. The company has already purchased a majority interest in a Dutch High yield Energy Technologies Group (HyEt) to cut its own operating costs and ramp up green energy production. The FFI units has a goal of supplying fifteen million tonnes of green hydrogen by 2030. Hydrogen will play a role in global decarbonisation of energy systems, and the cleanest procedure for producing hydrogen is through an electrolysis process of splitting water, powered by renewable energy sources. Blue hydrogen relies on natural gas with black and brown hydrogen generation fueled by coal.

BHP Group (BHP) and Rio Tinto (RIO) are both diversified, with BHP billing itself as “a provider of materials essential for infrastructure. The company’s products beyond iron ore are copper, nickel, metallurgical coal used for making steel, petroleum, and potash fertiliser.

The company is global in scope, with operations in more than ninety countries across the Asia Pacific Region, North and South America, Africa, and in Trinidad and Tobago.

On 15 February BHP announced its FY 2022 Half Year Financial Results, surprising the market by beating analyst expectations on all fronts. Revenues were up 27% and profit rose 57%. Net debt dropped 49% and dividend payments increased 49%. Despite labour issues stemming from the pandemic, BHP management maintained prior guidance for all its operating segments except metallurgical coal.

The company has a sector beating P/E – price to earnings ratio – of 8.26 versus the sector average of 13.49 and a respectable P/EG of 1.0. The P/EG ratio adds future growth into the calculation, with P/EGs at 1.0 indicating a fair price.

Rio Tinto’s self-description is similar to BHP’s – a company that produces materials essential to human progress…and for the low-carbon transition.

Investors excited by Rio’s commitment to enter the lithium race were sorely disappointed to learn the company’s plans for the Jadar Lithium Project in Serbia were scuttled by the Serbian government’s bowing to environmental activists. While Rio officially claims an agreement is still possible, the company had already bought the Rincon Brine Project in the lithium triangle region of Argentina.

The expert advice to diversify an investment portfolio sometimes spills over into looking for companies with a diversified product line serving multiple business sectors. Pure play single product producers are sometimes derisively viewed as “one trick ponies,” exposing owners to untold risk should something happen to that pony.

While iron ore miners lack the glamor associated with gold, lithium, and related metals, they offer investors history. The price of iron ore moved to the commodities futures trading model in 2010, with multiple periods of high volatility since the switch. 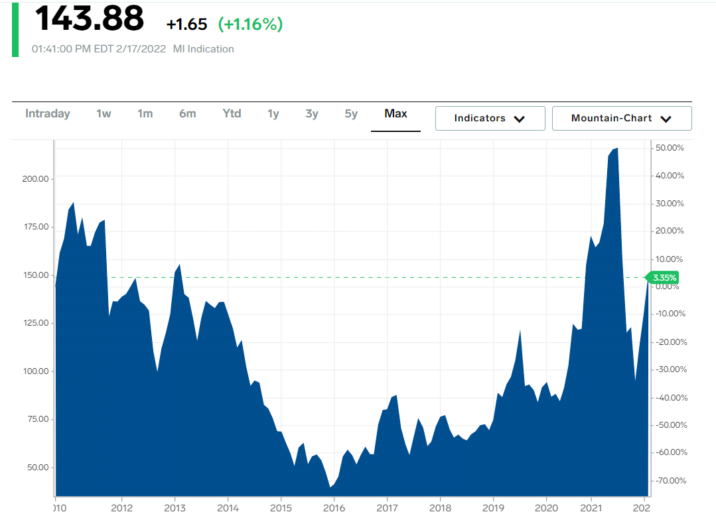 Note that with each rush to the bottom, the price reverses course. The following table includes current share price movement for the ASX big three iron ore miners as well as historical growth averages. 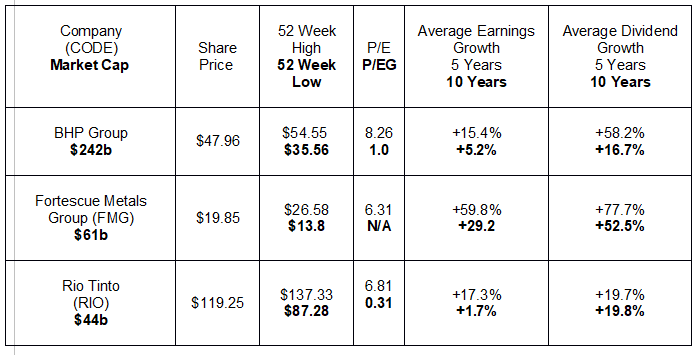 Pure play Fortescue Metals Group outperformed its diversified rivals. Dividend history is another feature that should attract investors, although Fortescue cut its dividend in its Half Year 2022 Financial Results Announcement. Although the company shipped record-setting tonnage of iron ore, a variety of factors limited the price the company could get for its product, especially for its lower grade ore. Revenues dropped 12% and net profit after tax (NPAT) declined 32%.

Investors can be a hard crowd to please, so instead of focusing on the AUD$0.86 per share dividend the company declared – representing a 70% payout ratio – the 42% drop from the half year 2021 dividend drew the ire of the market. Some analysts, however, predicted it. Fortescue remains the highest risk in the trio, as analysts are forecasting declining earnings per share in FY 2022 continuing into FY 2023.

The declining share price coupled with the low P/Es may be the most compelling reason to invest in one of the big three iron ore miners at this time.

Here is what global investment bank and advisory firm Goldman Sachs had to say about the outlook for commodities:

The ASX Minerals and Mining Sector (XMM) has defied year …