Lithium Stocks on the Radar Screens of ASX Investors

The law of supply and demand is arguably the most fundamental of all economic principles. Nowhere is the impact of the supply/demand balance more evident than in commodities.

Regardless of the basic nature of the commodity – hard like iron ore or soft like wheat – if demand for the commodity goes up, increases in both the price and the supply will follow.

The problem that creates for investors is an irrationally exuberant rush into a commodity by producers, leading to an out of balance condition where available supply exceeds current demand. A hard-earned lesson for many newcomers to share market investing is the bone-crunching drop in commodity prices that can occur in oversupply conditions.

As more and more producers abandoned other mineral and metal assets in favor of iron ore, the price eventually cratered as demand did not meet expectations creating an oversupply.

That exact scenario played out again in the final years of the previous decade with lithium. The top three ASX lithium producers at the time – Pilbara Minerals (PLS), Galaxy Resources (GXY), and Orocobre Limited (ORE) – were repeatedly the target of short sellers betting their stock prices would fall, and they did due to the same combination that cratered iron ore – too much supply and demand not meeting prior expectations.

Galaxy and Orocobre have now merged into a single entity, Allkem Limited (AKE). The following share price movement chart from the ASX website tracks the rising price beginning in 2017 to the fall from grace, commencing as the trading year 2017 drew to a close. 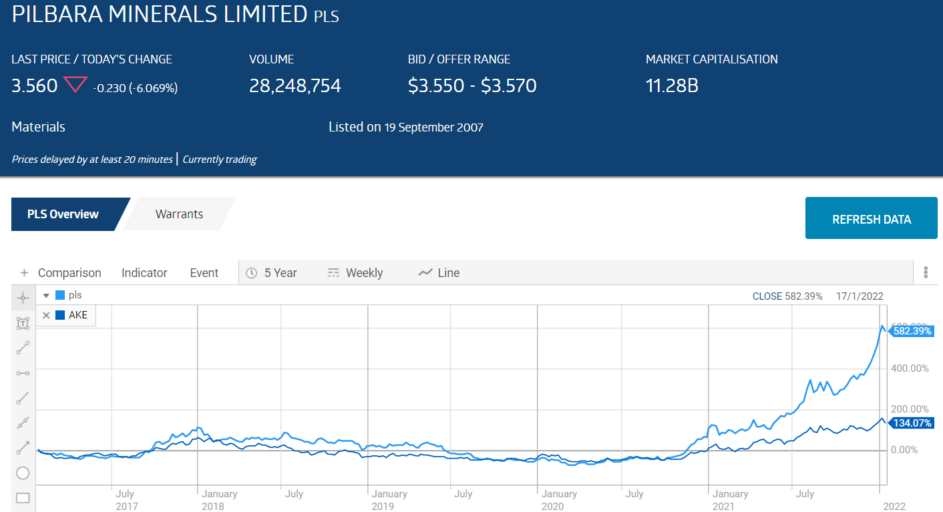 Unlike some other metals, the actual lithium is extracted from one of two sources – pegmatite rock formations – spodumene — and brine evaporation ponds made from the saline solution in geothermal brines extracted from the earth.

Both processes yield lithium carbonate which then goes through additional processing to produce the lithium hydroxide used in batteries.

Both of these stocks have history of revenue generation and profitability, along with positive growth forecasts, making them suitable for risk averse investors.

Allkem is also a boron producer, adding some diversification to its product mix, but another choice for risk averse investors looking for high level diversification from a single stock is Mineral Resources (MIN). 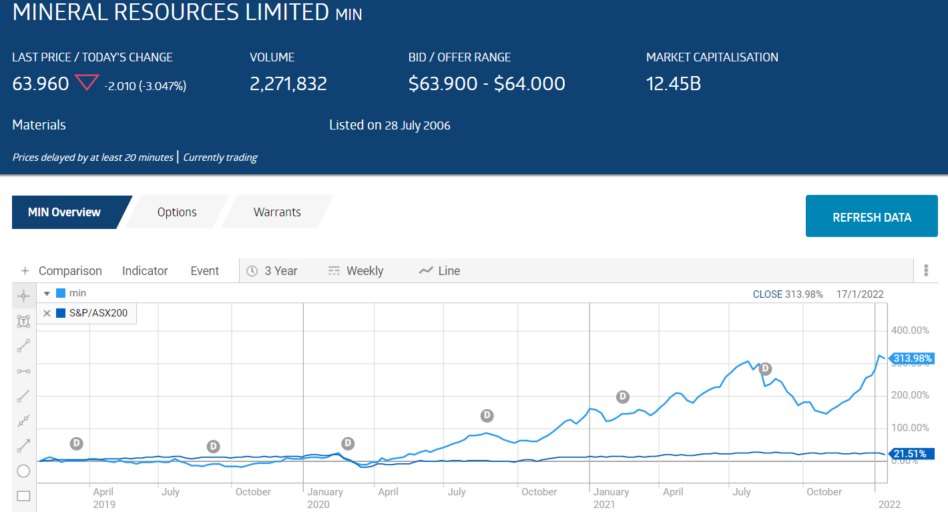 For the risk tolerant there are four lithium miners showing share price appreciation in excess of 1300% over the last three years. However, they have yet to begin production. The companies are: 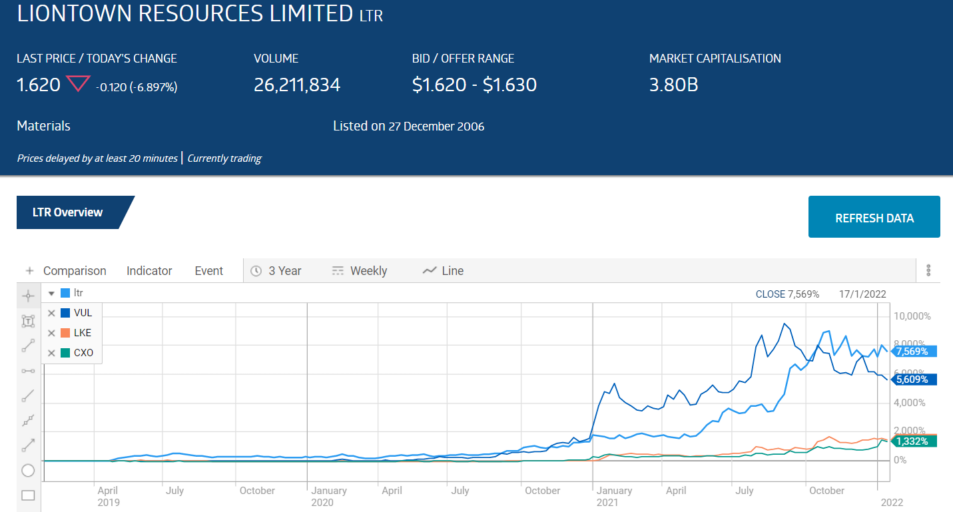 Liontown Resources provides a worthy example of how a red hot stock — considered “overpriced and overvalued” by some – can get even hotter.

The company has two highly prospective lithium assets in the mining districts of Western Australia — Kathleen Valley and Buldania , both 100% owned by Liontown.

The company is focusing on bringing the Kathleen Valley asset into production by 2024, when Liontown management claims some experts are predicting supply deficits.

The most recent good news for shareholders came on 11 January of 2022 when Liontown announced a major offtake agreement with LG Energy Solution (LGES) to purchase 100,000 tonnes of lithium carbonate in the first year of the agreement from Kathleen Valley and 150,000 in subsequent years.

While Liontown continues to actively seek other offtake agreements, investors should note that the company has in effect already sold close to one third of its projected first year production at Kathleen Valley, as announced in the DFS (definitive feasibility study) completed in November of 2021.

In December of 2021, the company completed a $450 million dollar share placement to accelerate the development of the Kathleen Valley Project.

Vulcan Energy’s assets are located in the Upper Rhine Valley of Germany and include Europe’s largest deep geothermal and lithium brine resources.

Vulcan is developing a technology in its Zero Carbon Lithium™ Project that will allow production of lithium chemicals needed for electric vehicle batteries and renewable energy applications without mining or evaporation ponds.

Like most early stage developing lithium producers with dramatic share price increases, Vulcan has treated its investors to a series of positive announcements.

On 10 December, the company announced its entry into the renewable energy business with its acquisition of a revenue producing geothermal renewable energy power plant, also in Upper Rhine Valley.

Vulcan is positioning itself as the first lithium producer based in Europe, with an eye on the fastest growing EV market in the world. On 8 December, Vulcan announced its first offtake agreement with Volkswagen. This is a five year agreement to begin in 2026 with Volkswagen buying between 34,000 tonnes and 42,000 tonnes of battery grade lithium hydroxide.

On 22 November Vulcan signed an offtake agreement with French automaker Renault for between 26,000 and 32,000 tonnes of battery grade lithium chemicals.

Vulcan expects to complete its Phase 1 DFS in the second half of 2022 with initial commercial production of lithium to begin in 2024.

Lake Resources has four lithium from brine projects in the lithium producing region of Argentina, and a pegmatite mining source of spodumene, also in Argentina.

The focus is on the Kachi Project where Lake in conjunction with its technology partner – Lilac Solutions – will use a novel direct extraction technology (DET) to eliminate evaporation ponds from the lithium from brine production process.

Lilac Solutions is a US company based in California that has developed the extraction technology with the support of the Breakthrough Energy Fund (led by Bill Gates) and the Massachusetts Institute of Technology (MIT)’s The Engine Fund.

S&P Global Market Intelligence data is forecasting a lithium supply shortage by 2025 while Benchmark Mineral Intelligence predicts demand for lithium from the automotive sector will increase forty times between 2020 and 2040.

The expected demand surge and the possibility of a supply shortage led Lake Management to announce if was more than doubling its previous production plans for the Kachi project, increasing output by 50,000 tonnes per annum (tpa). Positive drilling results from December and July of 2021 are expected to increase the size of Lake’s resource estimates at Kachi.

The company also announced support for the increased production from prospective offtake partners and funding sources. The new production figures will be included in Lake’s DFS (definitive feasibility study) for the project, scheduled for release in mid-2022.

Core Lithium changed its name from Core Exploration to reflect its current focus on developing its flagship Finnis Lithium Project, while maintaining its interest in its other assets in diversified metals, from uranium to copper to lead to zinc and other base metals.

The company has completed its DFS for the project and announced positive drilling results. Site construction is underway with production of spodumene concentrate expected in late 2022. When in operation, the wholly owned Finnis Lithium operation in the Northern Territory will be the first lithium production operation outside of Western Australia.

The DFS study pointed to average production of 173,000tpa of high-quality lithium concentrate at a cost of US$364 per tonne. The project design calls for a simple gravity based dense media separation (DMS) process, lowering the start-up capital cost to AUD$89 million dollars.

Core is in discussion with offtake partners, having already reached an agreement with China’s Sichuan Yahua Industrial Group (Yahua) for 75,000tpa of product from Finniss over an initial four-year period, with attached options for extension, and a Memorandum of Understanding (MOU) with Geneva-based Transamine Trading for 50,000tpa of spodumene concentrate from Finniss over a five-year period. In 2021 Yahua signed an agreement with the largest EV manufacturer in the world – Tesla – to supply battery-grade lithium hydroxide.

The question for both risk tolerant and risk averse investors considering investing in a sector already on fire is this. Will the sector see another supply/demand imbalance?

Some experts and analysts think it could sometime in the next decade, while many others disagree, forecasting demand that could outstrip supply as early as 2022. The case for the latter argument stems in large part from the response of automobile manufacturers in every corner of the world. To varying degrees, all are cutting back on producing ICE powered vehicles, with some aiming to eliminate them completely over the coming years.

Lithium Stocks on the Radar Screens of ASX Investors

The law of supply and demand is arguably the most …