The first trading week of a new year is a time when investors of all stripes reexamine their holdings. Some look to expand their existing holdings or add to their portfolios while others choose to stand pat, convinced the “wall of worry” of the moment from a volatile year will persist.

Investors in both camps look for the numerous “Year in Review” and “Outlook for 2021” articles for guidance and stocks to consider or to avoid. Some of these outlook articles include a view surprising to some – lithium has come back on the investing radar as increasing demand and dwindling supply combine to make an ideal environment for growth.

For a variety of reasons, the once red hot outlook for lithium faded in 2018 amidst oversupply conditions fueled by multiple miners rushing in to take advantage of the bright prospects for the adoption of Electric Vehicles, and to a lesser extent the push for large scale energy storage capabilities. The simplest explanation for the collapse in the price of lithium was battery demand had not lived up to the expectations.

The bullish outlook for lithium in 2021 has already gained investor converts as ASX lithium miners are on the upswing. Investors who make use of the Top Thirty Shorted Stocks List that appears weekly on thebull.com.au have noticed the absence of three of the top miners on the ASX with lithium mining as their primary focus – Pilbara Minerals (PLS), Orocobre (ORE), and Galaxy Minerals (GXY).

Since the 2018 collapse, those three stocks have been frequent residents of the list, often at the top spot. All three have disappeared from the list, a sure sign the short-sellers – whom many investors believe to be “the smartest guys in the room” – find the risk of rising share prices too high for their taste.

Since the start of this first trading week of 2021, all three are up double digits, an upward trend that began in November of 2020. 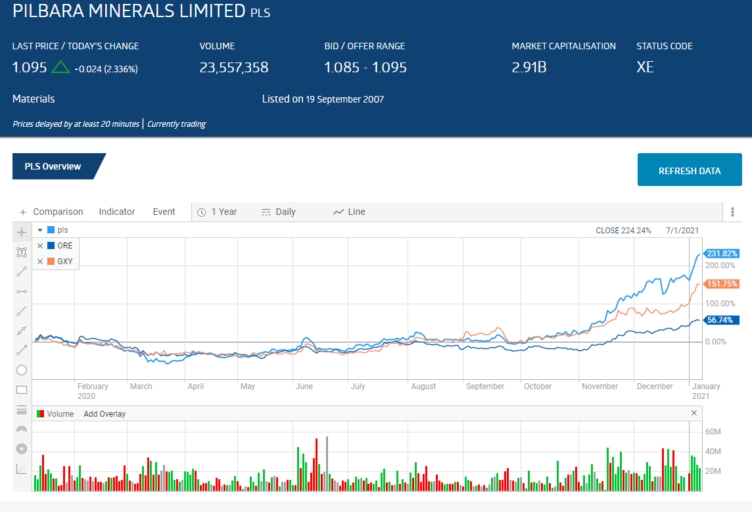 The bullish argument for future lithium pricing made by industry experts and some market analysts is simple. The 2018 collapse sent some lithium producers into receivership; some lithium mines into care and maintenance status; and the end of capital expenditures for exploration and development.

The supply/demand balance can be seen in the following graph, appearing in a 28 May article on mining.com:

Lithium carbonate and the more expensive lithium hydroxide are key ingredients in the lithium-ion battery. Although the history of the development of the “battery that revolutionised the world” goes back to the United States, it was the Japanese who introduced the Li-ion battery for commercial use in video recorders back in 1991.

Today the application of the Li-ion in EVs seems to generate the most excitement. The following chart shows the longer term demand for the Li-ion battery: 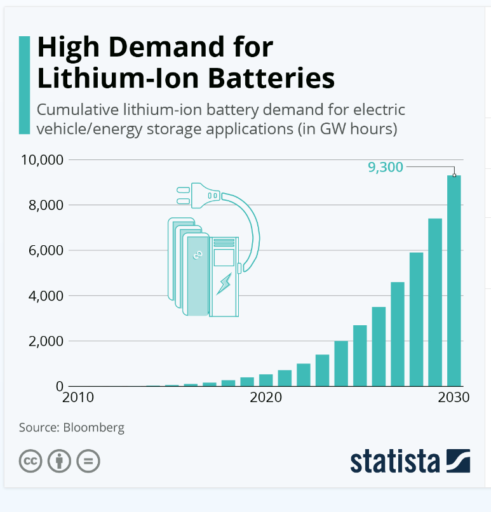 While it is the EV battery market that garners the most attention in the popular press, the demand for energy storage capability for wind and solar generated electricity is seen as critical to increasing adaption of renewable energy sources.

South Australia made headlines when US based Tesla Motors’ Powerpack System was selected to provide an energy storage component for the massive Hornsdale Wind Farm, acquired by French renewable energy provider Neoen. The system uses the world’s biggest battery consisting of Tesla Powerpacks.

Despite the potential promise of the resurgent ASX lithium miners, cautious investors may remain reluctant for fear the “wall of worry” could spawn a tidal wave of selling in 2021.

These investors need only look at the market action here and in the US in this first trading week to consider that nothing, absolutely nothing, will derail the mad market stampede for more than a day or two.

Investors everywhere were concerned about a special election in the US state of Georgia giving full control of both the executive and legislative branches of the US government to a political party perceived as unfavorable to business interests. On the day before the election US markets fell. Aussie investors later responded with a spate of selling erasing earlier gains.

The following day US markets were up, but the fear of a Democratic Party sweep of the two US Senate seats up for grabs would lead to higher taxes and increased regulation persisted leading to a volatile day.

When the “brick” of the election result was added to the wall of worry as the Democratic party did gain control of the senate, markets in the US responded with a record-setting close and the ASX rallied as well. The bricks crumbled as investors bent on maintaining the rally realised after the fact the new administration and congress would almost certainly pass another $2,000 stimulus payment.

The wall of worry was washed away and not even riots that saw the US capitol building breached — not by British soldiers as in 1812 but by US citizens — cooled the red-hot appetite for stocks. US markets reached another all-time high.

The hottest lithium miner on the ASX right now is not one of the three largest players by market cap, but mid-cap miner Piedmont Lithium (PLL). 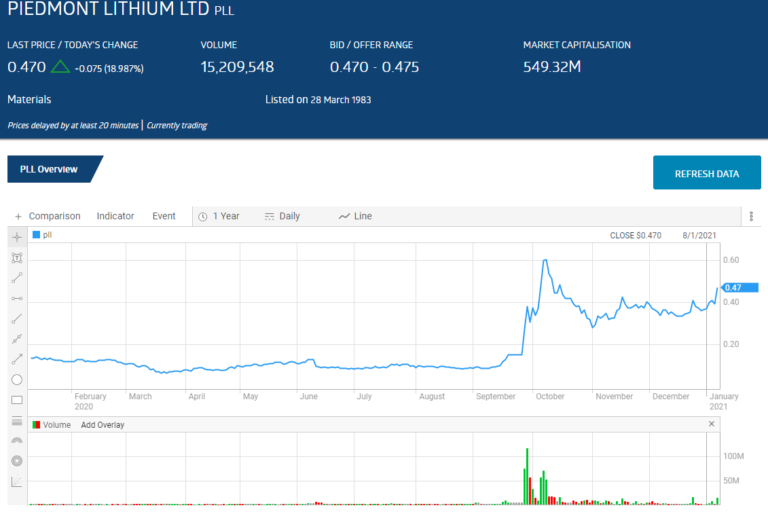 On 25 September, the company announced it had reached an initial agreement with EV producer Tesla to reserve about a third of its annual production of lithium hydroxide extracted from spodumene concentrate for Tesla. The Piedmont Lithium mine in the US state of North Carolina is expected to produce 22,700 tonnes of lithium hydroxide per annum from its anticipated annual production of 160k (tpa) of spodumene concentrate, with initial production expected in 2023.

In the first week of December of 2020 the company announced its proposed move to the US with a listing on the US NASDAQ listing while maintaining its ASX listing under the Chess Depository Interests.

The following table includes some key metrics for miners already producing, including the big three, and another diversified mining company with operations in both lithium and iron ore Mineral Resources (MIN). 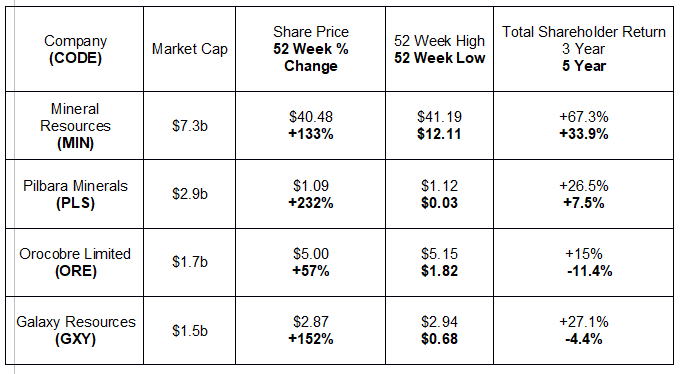 Mineral Resources was among the top five ASX 200 performers in 2020 with year over year share price appreciation of 127%. The company’s business operations focus on the mining sector, but its products and services are diversified. The revenue drivers in 2020 came from the company’s Western Australian mining assets in iron ore and lithium.

The company’s website claims its core operations are not in direct mining, but in providing services to the sector. This gives Mineral Resources exposure to a variety of commodities and companies. In addition, the range of mining services provided is exhaustive, ranging from design to construction to operation and maintenance.

FY 2020 was a banner year for the company with a staggering 507% rise in net profit after tax (NPAT) and a 41% increase in revenue.

It took Pilbara Minerals only four years to progress from the “first drill hole to production” at its wholly owned Pilgangoora Lithium-Tantalum Project in Western Australia. The project has access to road and port infrastructure and currently produces 2 million tonnes per annum with a two stage expansion plan underway. Mining and processing capacity are expected to more than double, to 5Mtpa and then again to 7.5Mtpa.

The share price has benefited from multiple operational updates as well as the announcement of the acquisition of a lithium project from Altura Mining adjacent to the Pilgangoora Project.

Pilbara Minerals is poised to grow in South Korea through its relationship with POSCO Steel, one of several Pilbara offtake partners. Offtake agreements are contractual arrangements between producers like Pilbara and end user buyers to buy a percentage of the producer’s future production.

Today there are two primary sources for the manufacture of lithium – hard rock ores and salt brines. Orocobre is a brine operator while the two of the other three – Mineral Resources and Pilbara Minerals — process lithium from hard rock. Lithium from brine primarily comes from Latin American countries with Orocobre operating the Salar de Olaroz Lithium Project in Argentina. The process calls for pumping waters rich in salt into evaporation ponds and waiting a few months (weather dependent) for evaporation.

Lithium from brine is a less costly operation than extraction from hard rock but the dependence on weather is a drawback. Orocobre also has a revenue generating boron operation in Argentina and a minority interest joint venture arrangement with Advantage Lithium, a Canadian company specialising in developing lithium assets.

Galaxy Resources has both brine and hard rock lithium assets, with the Sal de Vida Project in Argentina, the hard rock Mt Caitlin Project in Western Australia, and the hard rock James Bay Project in Canada. All three are wholly owned by Galaxy.

Sal de Vida and James Bay are in the development stages with the company focusing on the highly prospective Sal de Vida Project. Galaxy expects to begin producing lithium carbonate from a pilot plant at Sal de Vida with detailed designs for project completion to be finished in mid-2021 with construction and plant commissioning by end of year 2022 and initial production and ramp up throughout 2023.

Located in Quebec Canada, the James Bay Project is a hard rock lithium asset in proximity of both needed infrastructure and sufficient energy supply. Galaxy will complete a Preliminary Economic Assessment in the first quarter of 2021, followed by further engineering and exploration work as well as seeking offtake partners throughout North America.

While these stocks have seen substantial appreciation, investors have heard the claim that there is more to come before. However, the recent performance of Tesla Motors in 2020 suggests there may in fact be more to come. For 2020 Tesla, the world’s most valuable car company, delivered 499,950 EVs, with a record setting fourth quarter of 180,570 deliveries. Bloomberg New Energy Finance projects by 2040 35% of new car sales will be Plug in Hybrid Electric Vehicles (PHEV) or Battery Operated Electric Vehicles (BEV). 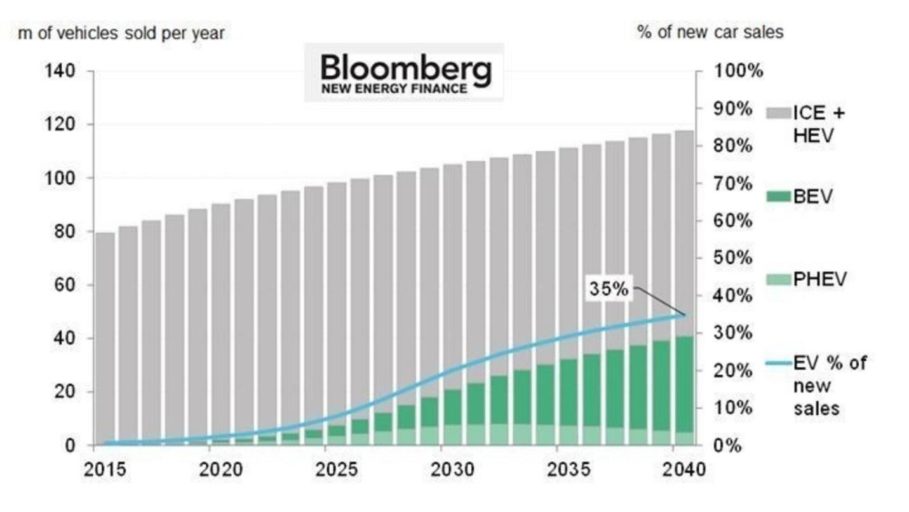 The first trading week of a new year is a …