Since the dawn of the industrial revolution, “King” Coal has been powering economic expansion around the world. By 2021 in a world reportedly choking on fossil fuel emissions in the atmosphere, the United Nations sponsored a conference on climate change in Glasgow Scotland.

The COP26 conference ended with an agreement signed by many – but not all – of the world’s largest emitters of carbon into our air. The agreement originally called for wealthier signatories to phase out the use of coal by 2030 and less wealthy countries by 2040 around the world. The agreement also called for countries to cease granting permits for new coal-fired power stations.

The agreement was hailed by officials at the UN as consigning the dirtiest of all fossil fuels to the dustbin of history. This was not the first time in recent memory when investors read many speculative opinions about the death of King Coal.

In 2013 China was rattling its saber about restricting imports of low quality, higher polluting thermal coal, used to generate electricity. An article appearing here on thebull.com.au at the time traced the recent history of the price of coal which had collapsed in the GFC and then rebounded in 2010 into 2011. Flooding in Southeast Asia and the Fukushima nuclear disaster led the upward movement in the price. The equation changed dramatically when the oil and gas shale boom in the US drove down the price of natural gas below the price of coal.

By 2015 global consumption of coal turned negative according to an analysis conducted by Greenpeace. A 9 November of 2015 article appearing on the website unearthed.greenpeace.org included the following graph. 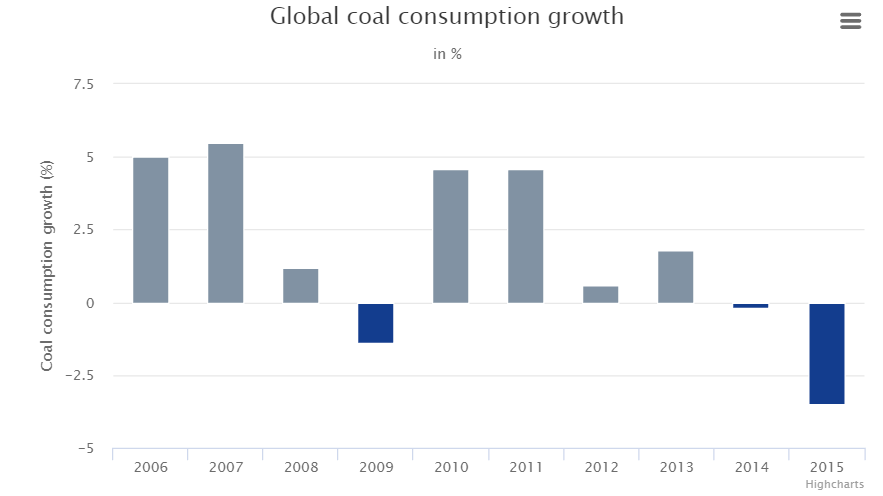 The Greenpeace analysis claims coal’s place in the mix of global energy sources would decline by 36% at the end of 2015, with production hitting a 30 year low. The organisation cited China’s clamping down on air pollution as the prime mover for the fall.

The cries of the demise of coal as an energy source got a boost from a raft of bankruptcies of major US coal producers in 2015 and on into 2016. Major US banks at the time were not funding capital expansion plans for future coal-related products.

Contrarian investors who ignored the numerous death sentences issued for coal and took a risk in 2016 through 2021 have been well rewarded. Some may have focused on contrarian indicators to conventional wisdom, beginning with the telling fact that outside the US market, coal maintained its price advantage over natural gas. China and India, these astute investors reasoned, were the key to growing demand for Australian coal.

Further indicators were present for the risk tolerant. The virtual ban on any developments to increase coal production set the world up for a supply/demand imbalance, which is now driving the prices up substantially.

Finally, despite analyses too numerous to mention ridiculing the “Clean Coal” efforts, both the Australian and US Governments are funding CCS (Carbon Capture Storage) technologies.

The price of coal was already on a major upswing before the Russian invasion of Ukraine plunged global energy markets into chaos. From an article appearing in Bloomberg.com on 22 January of 2022 entitled Far From Dying, the Coal Industry Is Actually Booming: 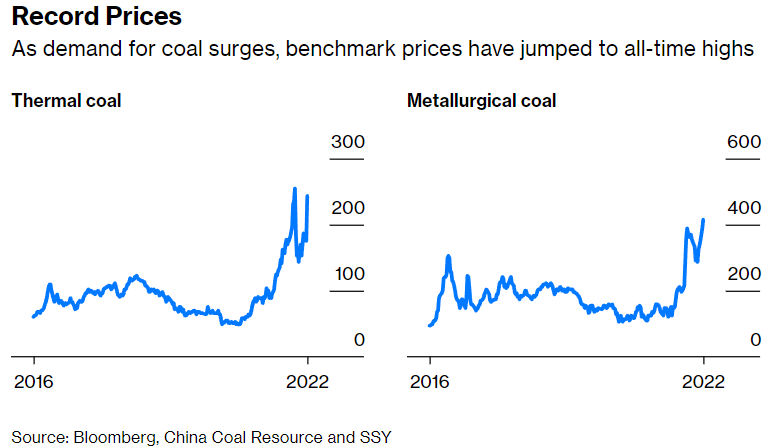 Some investors look for what they consider are “ethical” companies as part of their investing philosophy. Others see coal miners as a downtrodden group with a future that is challenging to understand, considering the vast divergence of expert opinions on the sector. The past is not subject to debate. Since the GFC (Great Financial Crisis) coal has “risen from the dead” multiple times.

The following graph from the businessinsider.com website tracks the price movements of coal since 2009. 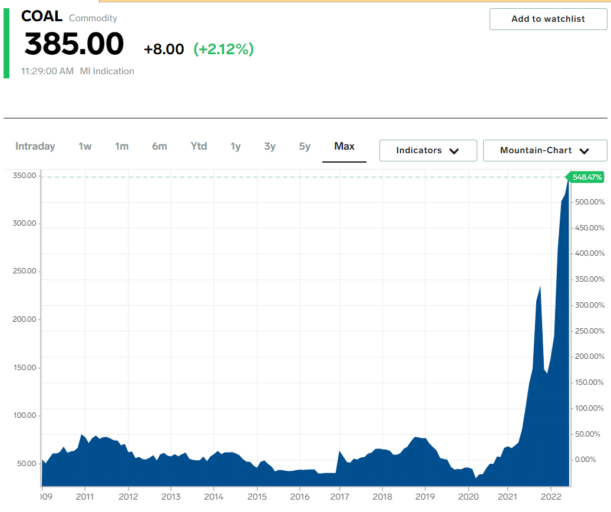 In at least one aspect, investing in coal miners may be the most challenging buy of all – the divergence of expert opinion.

In summary, the Bear case argues the current rally is a “blip” with long term headwinds ready to drown investor enthusiasm. Researchers at the Australian National University studying China’s decarbonisation plans have concluded Chinas’ thermal coal imports could decrease between 26% AND 45% BY 2025.

The Bull Case is best summarised in a recent note from Credit Suisse – a financial institution that claimed the outlook for the coal sector was “dire” back in 2015. By 2017 Credit Suisse increased its forecasts for thermal coal, with the latest note issued in early May of 2022 expecting elevated coal prices to remain in place. Citing geopolitical concerns, the company stated the global rush to be rid of Russian coal will likely support healthy premiums on Australian exports. Credit Suisse has OUTPERFORM ratings on two top ASX coal miners – Whitehaven Coal (WHC) and New Hope Corporation (NHC).

To support the view of Credit Suisse, investors need only look at the latest trade export numbers here in Australia. The May 22 figures released by the Australian Bureau of Statistics (ABS) showed a 9.5% increase of exports of good and services, with a 20% rise in coal exports leading the way. The May numbers were up 38.6% from the same period one year ago.

Exports of coal used for power generation (thermal coal) reportedly went from $16 billion dollars to $39 billion while the coal used for making steel – coking or metallurgical coal – rose from $23 billion to $60 billion. All this despite the Chinese ban on Australian coal initiated in 2020.

Given the lack of consensus opinion on the longer term outlook for coal, sticking with the major players may be a prudent strategy. The following table lists relevant metrics for Whitehaven and New Hope along with two other stocks.

Metallurgical coal prices rise and fall in concert with the demand for steel. China is the critical market here. The risk of a slowdown in China is partially offset by the status of metallurgical coal as reportedly having a lesser environmental impact and its lack of competitive sources. Although progress has been made using Electric Arc Furnaces (EAF) to produce steel that do not require coal, experts claim it will be 2050 before steel production via EAFs will reach 48% of the global total.

Coronado Global Resources is the only pure play metallurgical coal producer in the table. The company surprised coal skeptics when it became the biggest coal miner to launch on the ASX since 2012. However, the initial price was set at the low end of the range with coal Bears noting the IPO raised only $743 million dollars, roughly half of expectations.

Coronado has operations here in Australia and in the Appalachian region of the United States, with one operating mine here and five in the US. Electricity demand plummeted with the Pandemic induced industrial and commercial lockdowns, and the company’s revenues declined and posted a loss in FY 2020. Coronado’s business year follows the calendar so the company reports at the end of December, with the FY 2020 results highly impacted by the spread of the Omicron variant, but the company recovered in FY 2021, jumping to profit of $432 million dollars, up from the FY 2020 loss of $192 million.

Coronado is classified in the materials sector, not the energy sector. The average P/E ratio (price to earnings) for the materials sector is 9.76, besting the sector by a wide margin with a P/E of 2.75. The traditional P/E uses historical earnings in its calculation. Many investors see the P/EG as an improved measure, since earnings growth estimates are used, making the P/EG a better indicator of future performance.

Yancoal Australia owns or operates eleven producing coal mines across Western Australia, New South Wales, and Queensland. Like most of its major competitors on the ASX, the company produces premium quality thermal and metallurgical coal. Yancoal Australia is owned by the Chinese company Yankuang Energy Group Company Limited. Yancoal has no Australian brokerage coverage, so investors do not have ready access to analyst estimates and recommendations.

The company bills itself as “Australia’s largest pure-play coal producer. Full Year 2021 Financial Results benefited from the rising price of coal, with the average realised sale price up 72%, but production fell 4%, attributed to weather and COVID related issues. Net profit after tax (NPAT) rebounded from a $1,040 billion dollar loss in FY 2020 to a profit of $791 million in FY 2022.

Whitehaven Coal has both open cut and underground mines in New South Wales and Queensland. The company produces both thermal and metallurgical coal, with four operating mines and two projects under development. Whitehaven is rehabilitating two shuttered mines, both to be returned to “woodland vegetation.”

The company’s Q1 market update highlighted record average coal price, solid operational performance, $80 million dollars paid out in dividends, and $67 million in share buybacks. Whitehaven ended the quarter with $161 million dollars in net cash and reiterated its Full Year 2022 guidance. The company was hit hard by the COVID 19 Pandemic, with management citing a tight labour market, and absenteeism due to COVID as well as weather issues impacting operations. Given that the company posted a $543 million dollar loss in FY 2021, investors might see the reiteration of guidance as a positive indicator.

Much of the negative views on the future of coal are long term in outlook. In the medium term, conditions in Europe may offset the impact of China’s moves to lower its carbon footprint. The Dutch, the Germans, and the Austrians have already removed restrictions on the use of coal to generate electricity. The COP26 agreement ended with a change in language regarding the future of coal from “phase out” by 2030 to “phase down,” in response to China and India’s insistence those countries needed more time.

Risk averse investors may shy away from the basic economic argument that for a variety of reasons, coal production over the last decade has declined and the world now faces an energy crisis where coal is returning to the forefront. Limited supply in the face of increasing demand ends with one result – rising prices.

New Hope, like all the major producers in our table, has impressive P/E and P/EG ratios. The average P/E for the energy sector is 12.02 while the average P/EG is 0.24. The company is a diversified energy company, with oil and gas assets as well as its interests in two producing thermal coal mines. In addition, the company has an agricultural division, rehabilitating land adjacent to mining operations for cattle grazing. Finally, New Hope owns a coal export loading facility at the port of Brisbane.

The latest financial reporting from the company came on 26 May, with a Q3 quarterly report that disappointed investors, when total coal sales for the quarter dropped 26%. As with its competitors, the company is still suffering from COVID related disruption, with the weather adding to the woes. Despite this, New Hope lifted its Full Year 2022 guidance by 4%.

Since the dawn of the industrial revolution, “King” Coal has …