The Australian Bureau of Statistics (ABS) tells us coal was first discovered in Australia in 1797 in New South Wales, followed by Victoria in 1825. Early efforts to mine and market coal were less than satisfactory until the government stepped in in 1889 to begin registering coal producing companies.

Given the fact Australia now ranks as the world’s leading exporter of coal and fourth largest producer, it is not hard to understand our government’s continued romance with coal. Australia has the fourth largest coal reserves on the planet and coal remains our second largest export commodity.

Coal is used to generate electricity – thermal coal — and to make steel — coking coal. Both now have competition. Natural gas and renewable energy sources in wind and solar are eating away at thermal coal’s once dominant position as the fuel source for electricity generation. In addition, the advanced age of coal-fired electricity generating plants makes closing down a viable alternative to ongoing maintenance and modernising costs.

Although the long term outlook for the black coking coal is better than for brown thermal coal, electric arc furnaces are poised to erode coking coals use in steel production.

The following graph first appeared in 2018 in a summary of academic research papers entitled Coal Transition in Australia, one of many analyses predicting dire outcomes for coal. 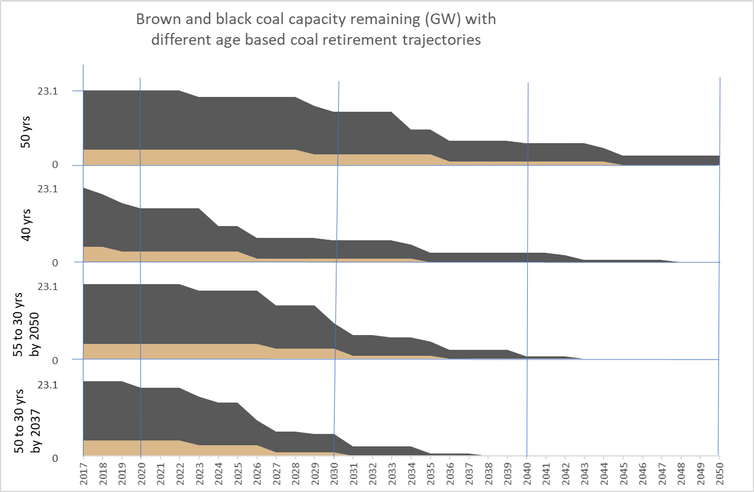 Hydraulic fracturing and improvements in solar and wind led to lower prices in these fuel sources, eroding coal’s traditional cost advantage. However, investors following the fortunes of coal have ample evidence coal is not going away anytime soon, especially in developing countries. From the US Energy Information Administration:

In an era when what is fact and what is not is hotly debated, some investors may end up dazed and confused when finding “facts” arguing against the timeline for coal-fired electricity generation. A 10 December 2020 article appearing on the website insideclimatenews.org has a contrasting view. 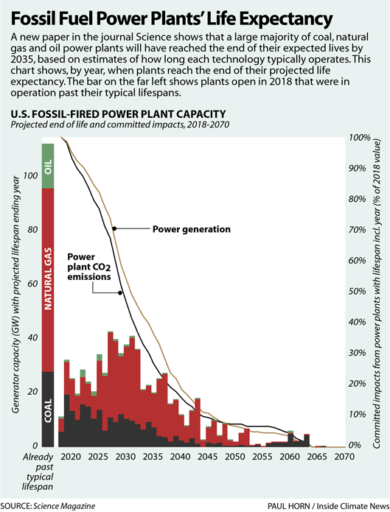 There is continuing interest in technological advances that could rescue coal, and our government is embracing them. In 2012 the Gillard government established two agencies to promote renewable energy technologies — the Australian Renewable Energy Agency (ARENA) and the Clean Energy Finance Corporation (CEFC).

On 16 September of 2020, the government unveiled a new Technology Investment Roadmap, funding investment in “low emission” technologies, including a Carbon Capture and Storage (CCS) technology.

The Fund will direct $18 billion dollars into low emission technologies over the next ten years which is expected to drive an additional $50 billion in investments.

The end result is a push to include other energy sources beyond renewables into the funding mix. Although a form of “mini” nuclear plants and hydrogen powered generation are included, it is the CCS investments that could insulate our coal mining industry.

On 2 March, the Morrison government opened another $50 million dollar fund, this one exclusively dedicated to promoting CCS technologies.

In an article appearing in manmonthly.com.au Australia’s Minister of Resources claimed:

The article went on to say:

In theory, the CCUS (Carbon Capture, Utilisation, and Storage) appears to be a relatively simple process, but as shown in the following pictogram it involves multiple steps, each with its own challenges: 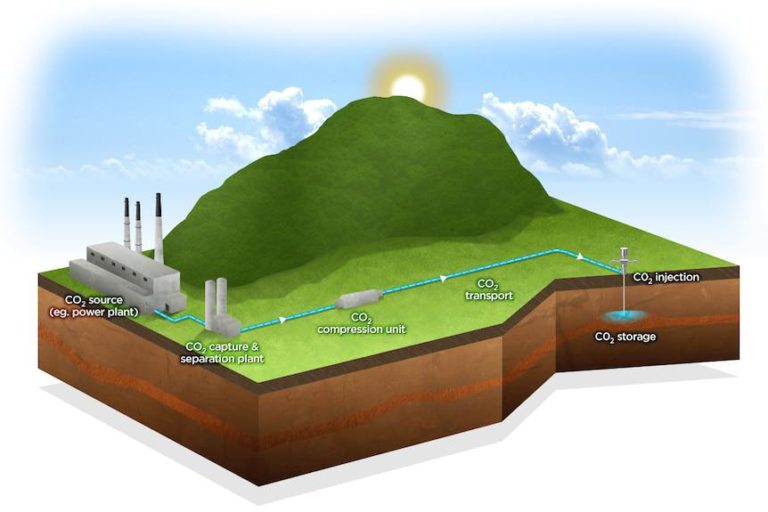 Carbon capture is one of the technologies identified by the Government for investment.

The technology for separating CO² emissions found in natural gas reservoirs can trace its origins back to the 1920’s, but it would be 1977 in Texas before the first attempt at capturing CO² to prevent its release into the atmosphere was made.

Since then the potential of the technology to “clean up” the world’s dirtiest and most abundant fuel source for electricity generation has been the subject of intense criticism and has as yet failed to live up to its promise.

For younger ASX investors troubled by the criticisms of CCS technology, a review of the global oil shortage of the 1970’s is worth noting. At that time concern over the supply of oil led analysts and experts alike to sound the alarm over the coming of “peak oil” – the hypothetical point in time when the global production of oil reaches its maximum rate, after which production will gradually decline.

Technology has a way of making the once unthinkable a reality and few in the 1970’s dreamed of drilling for oil in the deep oceans of the world and of the impact of hydraulic fracturing technology.

Investors have multiple ASX coal mining stocks from which to choose, with two mega-cap diversified companies and three large cap pure play or near pure play coal miners. Smaller players may not be able to survive continued volatility in the sector.

For those interested in a safer bet, diversified resources global giant BHP Group (BHP) along with diversified investment company Washington H. Soul Pattinson (SOL) both have substantial investments in the coal sector. In addition, New Hope Corporation (NHC) has interests in oil and gas and agricultural land development.

All of these companies were negatively impacted by the COVID 19 Pandemic, with the most diversified suffering the least. The pure play coal miners posted the worst drops between FY 2019 and FY 2020, as seen in the following table. 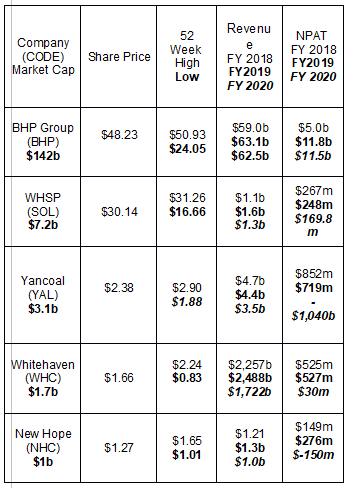 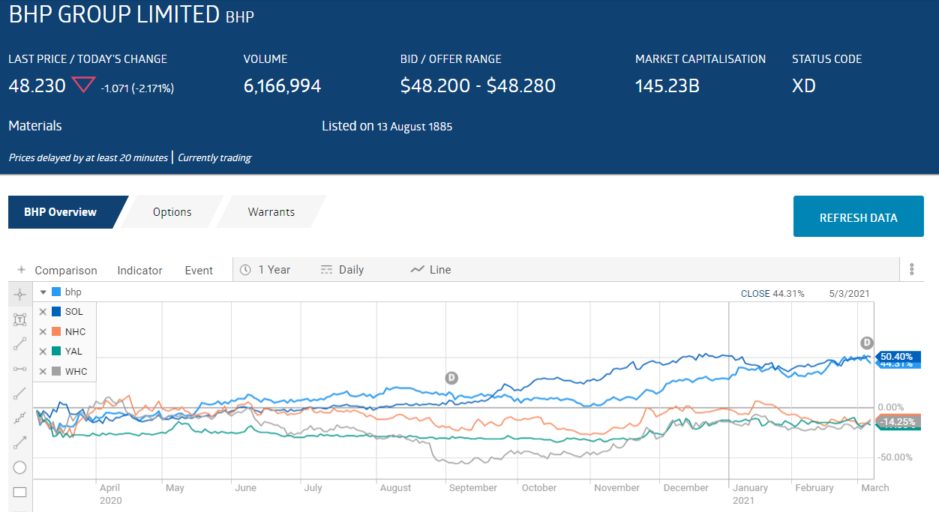 BHP Group is a self-styled “diversified natural resources company”, specialising in commodities including oil and gas, coal, nickel, and potash. In addition the company is involved in production, refining, and exploration of petroleum. The COVID Pandemic induced declines in demand for oil and coal were more than counterbalanced by the company’s principal asset – its iron ore operations.

Washington H Soul Pattinson is an investment entity with a 100 year history on the ASX. The company’s top holding is TPG Telecom (TPM), now merged with Vodaphone; Brickworks (BKW), and New Hope Coal. The company recently reduced its 50% interest in New Hope to 43.94%. The performance of New Hope Coal and zinc, copper, and gold miner Round Oak Minerals Pty were the key drivers impacting the company’s revenue and profit declines. WHSP has increased its dividend every year since 2000 and has assets in multiple other sectors.

New Hope Coal has oil and gas assets in addition to its three operating thermal coal mines. The company also owns a multi-user port facility in Queensland and has a land management operation which rehabilitates land around the company’s mines to be used for cattle grazing.

Whitehaven Coal Has four operating coal mines in New South Wales with two development projects underway in Queensland. The company’s Half Year 2021 Financial Results provided no relief for investors. Revenues dropped 21% and the profit loss increased by 445%. For the Half Year 2020 Whitehaven posted a profit of $27 million, collapsing to a loss of $94 million for the Half Year 2021.

Despite that performance, a UBS analyst maintained its BUY rating on WHC and its $2.30 target price.

Some experts are speculating the Chinese may be suffering from their ban on Australian coal exports, with others pointing to robust demand from both India and Japan cushioning the Chinese blow. In addition, coal prices have risen of late due to supply constraints. The Energy Information Agency, the World Bank, and the IMF (International Monetary Fund)) all expect coal prices to rise in 2021.

Coal may be in decline, but the question of how far and how fast remains debatable. Bullish investors should be actively following the news out of the multiple CCS facilities around the world.

The Australian Bureau of Statistics (ABS) tells us coal was …