Is it Time to Buy the Uranium Miners?

With the disastrous failure of a nuclear power plant at Chernobyl in the Ukraine fading into memory, nuclear power as a source of clean electricity generation seemed poised for a comeback going into 2011. The price of uranium was on an upward roll. The following price movement chart is from the World Nuclear Association. 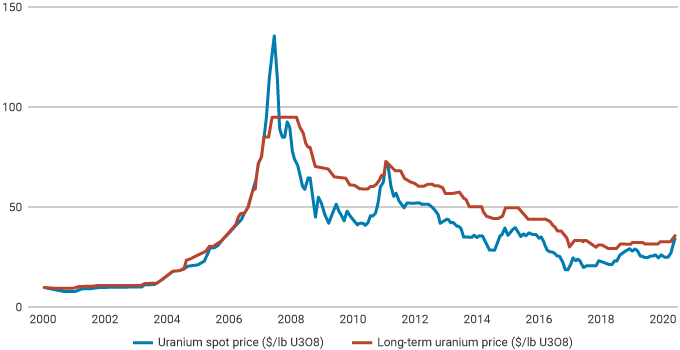 In March of 2011, an earthquake spawned a 15-metre tsunami with three nuclear reactors at Fukushima in Japan in its path. The three reactors were disabled, with the reactor cores melting within three days.

While it seemed the future of nuclear power as an energy generating source was on life support status, an event in the US in late 2020 breathed a potential rebirth of interest in nuclear power. The chart above from the World Nuclear Association shows the beginnings of the spike in 2020.

In early December of 2020, the American Nuclear Infrastructure Act of 2020 received a rare bi-partisan approval in a committee of the US Senate. The bill is designed to promote U.S. international leadership, preserve America’s nuclear fuel supply chain, prevent more carbon emissions from entering our atmosphere, and protect the US economy, energy, and national security.

Provisions of the bill support efforts to assist innovators developing new designs and new ways to generate nuclear power. These new technologies should be safer, smaller, and more flexible.

Global investors, including institutional, retail, and speculators, jumped on the news, with most aware of the uranium production cutbacks following Fukushima. Should the improving demand outlook come to pass, the uranium miners would benefit from increased uranium mining and exploration. In short, existing supply is insufficient to meet demand, the argument goes.

The following graph charts the massive inflow of investor capital in uranium mining stocks following the positive news out of the US. 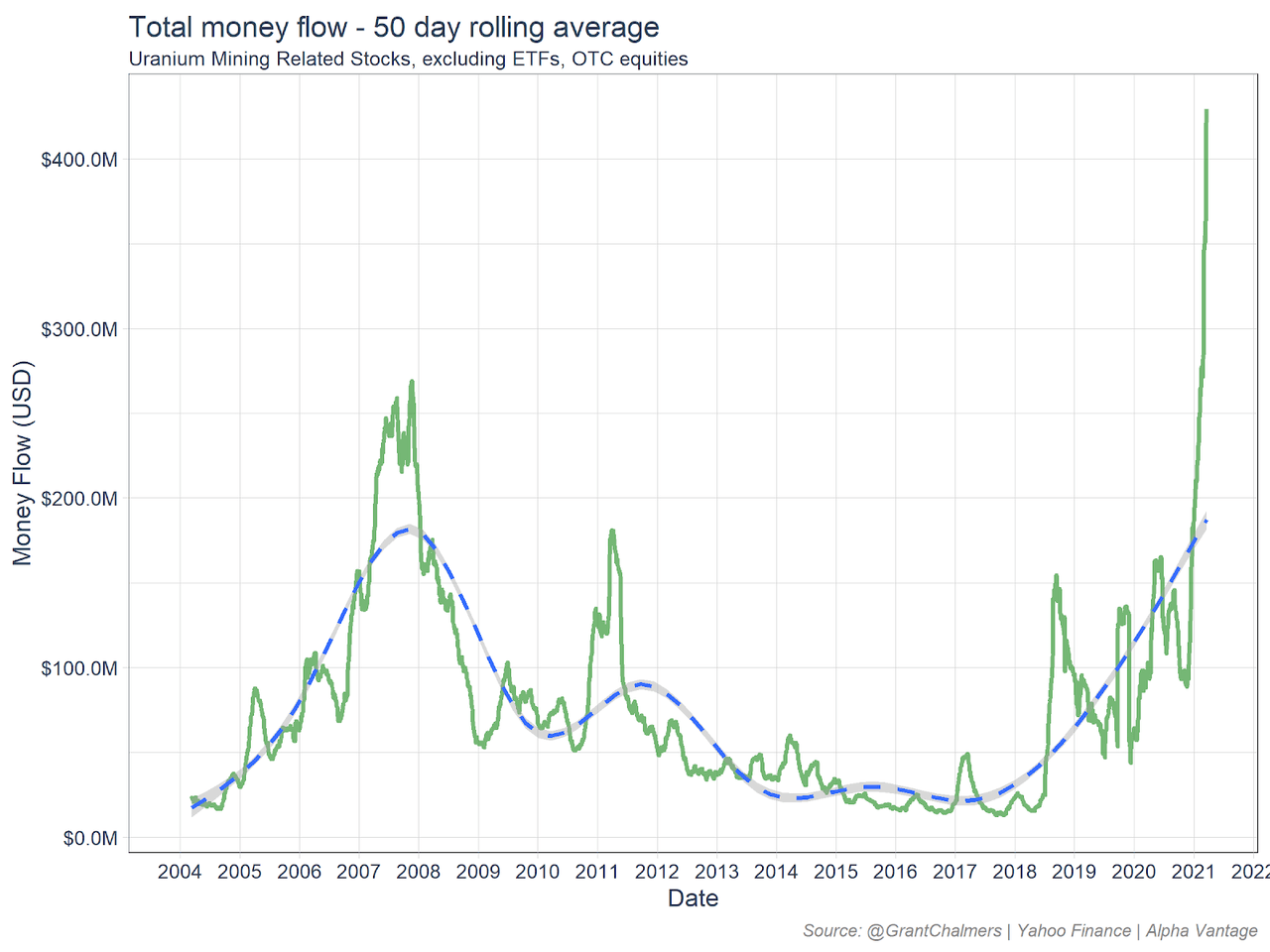 Investors who have shown little interest in the uranium mining sector in the last decade might be surprised to learn there remains on the ASX close to thirty uranium miners, large and small.

Five of the largest by market cap have seen share price appreciation year over year well in excess of 100%, with the beginnings of the upward trend coinciding with the news on the American Nuclear Infrastructure Act of 2020. The stocks are: 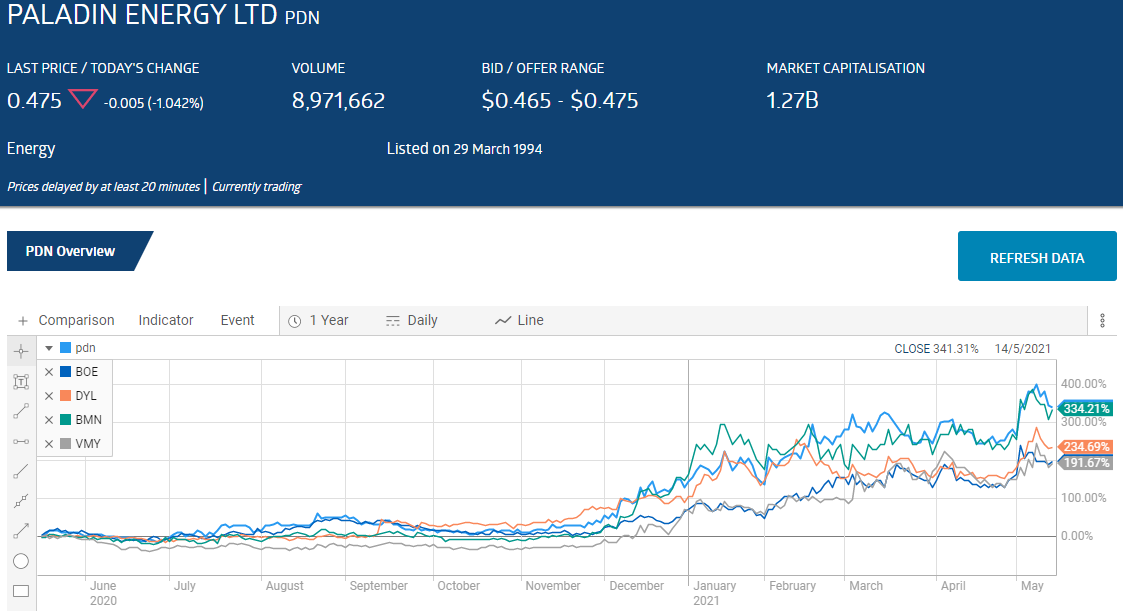 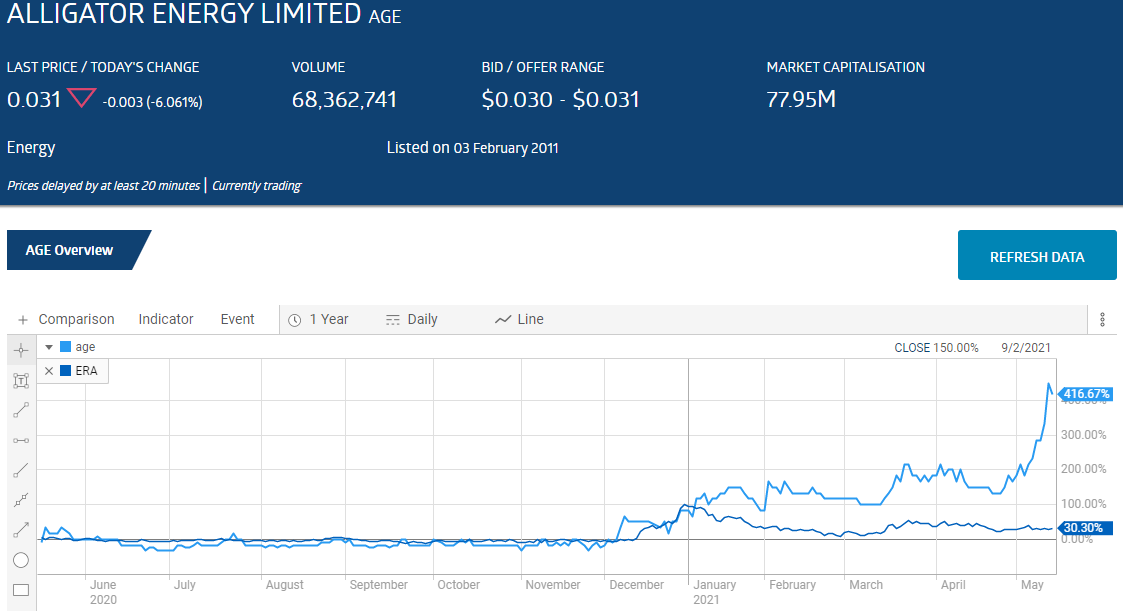 As is the case with virtually all commodity producing stocks on the rebound, the daunting challenge for investors is the choice between the competing bullish and bearish future outlook.

Another hopeful future development is TerraPower, a startup operation funded by Microsoft founder Bill Gates. TerraPower’s design calls for sodium-cooling, that eliminates the need for heat-driven turbine generation. Instead, the design stores heat in a tank of molten salt for future generation into electricity.

In the US, there are reports the current administration is considering government subsidies to keep more of that country’s aging nuclear reactors from closing.

The bullish case for SMRs is equally embraced by the bears. The first SMR in the US has already received a final safety evaluation from the US Nuclear Regulatory Commission (NRC) with a final approval decision expected in August. The United States DOE (Department of Energy) has already agreed to provide $1.4 billion dollars to help fund the first SMR in the US at the Idaho National Laboratory.

The first module is not anticipated to begin operating until 2029, and therein lies the core of the bearish view. With much of the world’s existing nuclear power generating capacity in operation for more than thirty years, how long and at what cost can they be replaced?

Cost and production delays in nuclear power plant construction harken Aussie investors back to the euphoria over Liquefied Natural Gas (LNG) plant constructions. Right now the once heralded Plant Vogtle nuclear power expansion project in the US state of Georgia featuring a new and improved Westinghouse Design has yet to recover from significant project delays and substantial cost overruns. COVID 19 aggravated the production delays with a current estimate of a November 2021 startup for one of the two new units and November of 2022 for the second.

The short answers for the bearish view is nuclear power plants cost too much and takes too long to build. 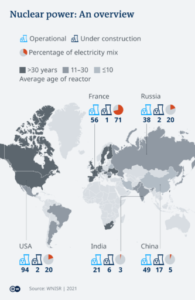 However, given the rapid price rise in mining stocks even believers in the bearish view might be tempted to jump onboard for the ride.

Alligator Energy makes that case. Despite its small market cap and near penny stock status, the company has three uranium mining projects in development — Alligator Rivers in the Northern Territory, and Big Lake and Samphire in South Australia along with one Nickel/Cobalt prospect in Italy – the Piedmont Ni-Co Project.

Samphire is on the company’s front burner with the commencement of drilling programs there in the planning stages. Alligator got a major boost on 10 May when the company announced a strategic relationship agreement with Traxys North America, the US division of the global commodities trading group Traxys.

Here is what the company had to say about the agreement:

While the share price appreciation appears impressive, it should be noted one year ago the stock price was trading at sub-penny level, closing at $.006 per share. The current trading price is just $0.031.

The other uranium miners seeing massive share price increases are in the process of restarting shuttered mines or in the development planning stage. Not are producing uranium yet.

Paladin Energy is bringing back the once producing Langer Heinrich mine in the African country of Namibia, with a successful capital raise providing necessary funds. The company also has one uranium prospect in Canada and another two here in Western Australia.

Paladin is going all-in on the Larger Heinrich mine, having sold another African prospect – the Kayelekera Mine in the African country of Malawi – to focus exclusively on the Langer Heinrich mine, with a restart plan in place. The asset sale and the capital raise reduced the company’s debt loads to “prudent” debt levels.

The Larger Heinrich mine has a proven historical production track record and a projected mine life of 17 years.

Boss Energy claims to have a head start over other miners, with a completed feasibility study in place projecting the restart of its shuttered Honeymoon Mine in South Australia in 12 months.

The company has kept the mine in good state during its care and maintenance status, with $170 million dollars in established infrastructure in place. Boss Energy has all necessary Federal and State permits in place to mine, process, store, and export uranium.

Deep Yellow is focusing on its portfolio of uranium assets in Namibia, with primary emphasis on its Tumas asset, wholly owned by Deep Yellow through its subsidiary company, Reptile Uranium Namibia (Pty). A successful PFS (Pre-Feasibility Study) led the company to immediately initiate a DFS (Definitive Feasibility Study) as of 11 February of 2021.

Bannerman Resources holds a 95% interest in the Etango Uranium Project in Namibia. The company claims the Etango Project is one of the world’s largest undeveloped uranium projects. A DFS for the project and environmental permitting are complete. The project is awaiting an investment decision to proceed, but some estimates point to full scale production at Etango vaulting Bannerman Resources into the top ten uranium producers in the world.

Vimy Resources has two uranium assets here in Australia. The wholly owned flagship project is the Mulga Rocks Deposit in Western Australia. The Alligator River Project is a JV between Vimy with 79% ownership and Rio Tinto Exploration Pty Limited (RTX) with 21% interest. On 10 March of 2021 Vimy management announced the company had signed a binding term sheet to acquire the Rio interests.

A capital raise to fund development of these projects met with strong shareholder disapproval, driving the stock price down 14%.

Considering the number of uranium miners on the ASX, it may come as a surprise that as of today there are only two operational uranium mines here in Australia – the Olympic Dam mine owned by BHP Group (BHP) and the Four Mile Mine, a JV managed by Quasar Resources Pty.

Is it Time to Buy the Uranium Miners?

With the disastrous failure of a nuclear power plant at …