On 11 March of 2011, an earthquake and subsequent tsunami struck Japan with the Fukushima nuclear power generation plant in its wake. The damage caused by the event led to the worst global nuclear accident since the disaster at Chernobyl in 1986.

The incident also dashed the hopes for expanded use of nuclear power in a world eager to curb the impact of pollution emanating from fossil fuel powered electricity generating plants.

The outlook for uranium took a turn for the better on 4 December of 2020 when the US Senate passed a bill supported by both political parties – the American Nuclear Infrastructure Act. Although the act has the clear intention of strengthening and supporting the US nuclear fuel industry, there is not a hint of any plans to expand electricity generating capacity from nuclear power plants in the US.

However, back in May of 2020 the US Department of Energy announced plans to build two new “demonstration” prototype nuclear power plants in the next seven years. The outlook in the US is decidedly different in both the European Union and Canada with both countries stating nuclear energy will be included in efforts to reach climate goals. Germany is in the mix as well, now questioning its earlier commitment to phasing out of nuclear energy by 2020.

All of this is good news for Australian uranium miners. Although Australia ranks third in total global production of uranium, behind Kazakhstan and Canada, we rank first in recoverable uranium resources.

A sweetener is buried in the new US bill, excluding uranium imports from Chinese or Russian companies.

Despite the Fukushima tragedy, the World Nuclear Association points to 2019 as the seventh consecutive year of increasing electricity generated from the world’s nuclear reactors. According to forecasts from BMO Capital Markets, demand for uranium will outstrip uranium production from mining and non-mining sources (secondary supplies.)

Skeptics of a return to prosperity for the uranium mining sector recall predictions of uranium as Australia’s next mining boom following the government’s decision to end the ban on uranium sales to India.

Yet six of the largest ASX uranium miners by market cap have seen double digit share price increases in the past month, ranging from +35% to +72%. And the uranium sector is uniquely Australian with only Canadian producers offering any global competition among western style democratically run countries.

The boost comes at a time when it appears the risk appetite among Aussie investors is improving as conditions here are far more favorable than in the United States. The ASX 200 closed lower for the week on the news CSL was abandoning its COVID vaccine trials, but the index still capped its sixth consecutive week of positive gains.

In the US, a continuation of bleak unemployment filing numbers and the apparent total failure of any kind of fiscal stimulus coming out of the US Congress by year’s end has the Dow Jones Industrial Average (DJIA) and the S&P 500 dropping. At week’s end, the DJIA closed up following speculation the FDA (Food and Drug Administration) final approval of the Pfizer COVID 19 vaccine was imminent.

Aussie market participants expressed a strong preference for two of the uranium miners with share price appreciation in excess of 50% over the past month as well as year over year. The two stocks are Bannerman Resources (BMN), an exploration and development company with interests in Namibia South Africa, and long-time ASX uranium stalwart Paladin Energy (PDN) with interests in Namibia along with interests here in Australia and in Canada. It is interesting to note that the only major ASX uranium company to post both revenue and profit increases in FY 2020 — Energy Resources of Australia (ERA) — lagged far behind the share price gains of the smaller rivals.

From the ASX website here are the price movement charts for one month followed by year over year performance for the three. 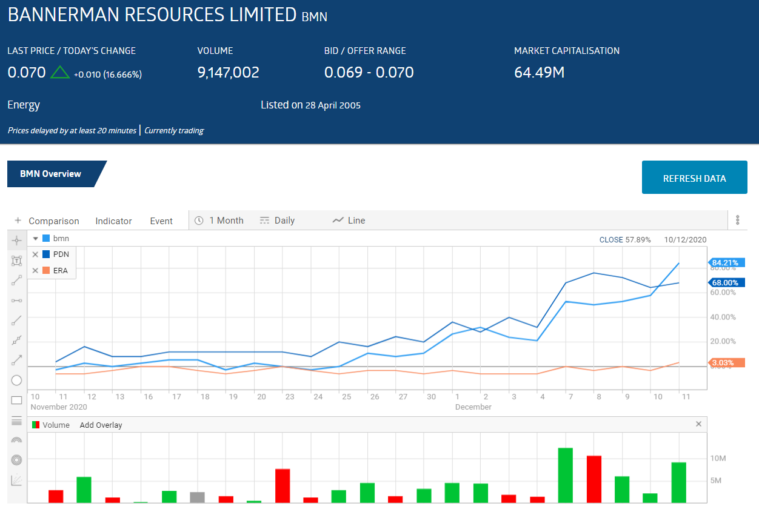 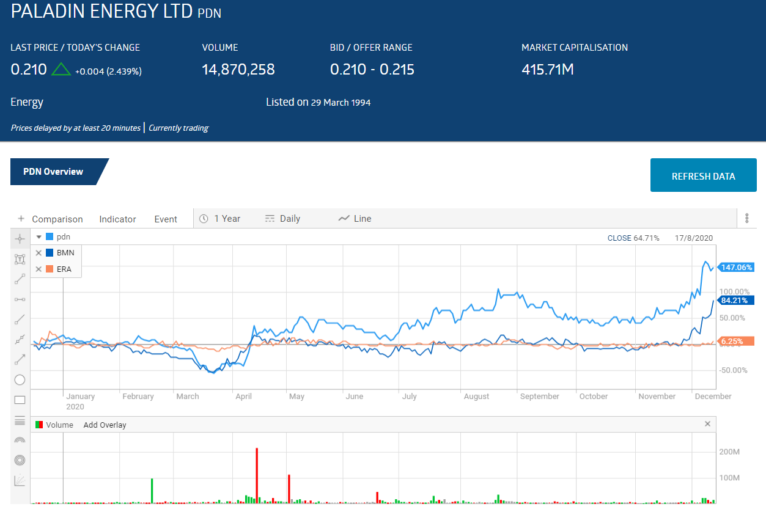 The company was established in 1980 and listed on the ASX in that same year. Its Ranger mine in the Northern Territory began producing from Pit 1 in 1981, closing in 1995 with production shifting to Pit 3. The company was acquired by Rio Tinto (RIO) in 2000 and now operates as a subsidiary of Rio, with Rio controlling 68%.

Paladin Energy’s producing mine was the Langer Heinrich mine in Namibia, with a portfolio of exploration assets in Australia and Canada. With uranium prices in a sustained downtrend Paladin decided to put the Langer Heinrich Mind into care and maintenance status back in May of 2018.

Following an intensive eighteen month prefeasibility and optimization study, in July of 2020 Paladin released its Langer Heinrich Mine Restart Plan.

The plan included cost profiles and reserve estimates. The Ramp-Up Phase will be completed in 12 months once commitment to the Restart Plan is secured with initial production to begin within that time frame, followed by a 2 to 8 year Mining Phase, with a 9 to 17 year Stockpile Phase, leading to a total mine life estimate of 17 years. Paladin owns 75% of the Larger Heinrich Mine.

Bannerman Resources is in the exploration and development stage with its flagship uranium asset, the Etango Uranium Project, located in the same mining region in Namibia as Paladin’s Larger Heinrich Mine. Bannerman owns 95% of the project.

The company has completed a Definitive Feasibility Study (DFS), estimating uranium production of 7-9 million pounds (Mlbs) of U3O8 per year for the first five years and 6-8 million pounds U3O8 per year thereafter over the 16 year life of the mine. U308 is an impure mixture of uranium oxides commonly known as “yellowcake.” The DFS also indicated substantial expansion potential at the site.

Released in 2012 the DFS was shelved due to the price decline for uranium translating into funding obstacles for the capital expenditures required. Bannerman is back, with a 5 August release of a Scoping Study undertaken for a scaled down project, renamed Etango-8, to reflect the projected uranium production of 8Mtpa (million tonnes per annum.)

The study found the reduction of the original DFS outline for a 20Mtpa production output could overcome the funding hurdles for the more ambitious and capital intensive project. The study relied heavily on the positive technical and feasibility findings from the original DFS. At a lower production level the project becomes both financially feasible and profitable, while maintaining the expansion potential to the original project scheme. Bannerman expects a new prefeasibility study to be completed by mid-2021.

There are three additional ASX uranium miners that passed the test of positive share price appreciation over the past month and year over year: 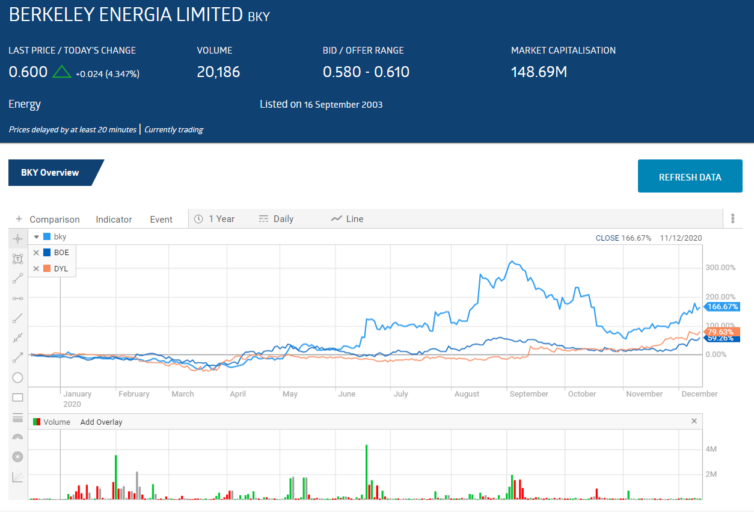 Berkeley Energia is a Spanish company that trades on the ASX. The company is developing the Salamanca Uranium Project in Western Spain.

Berkeley claims the project has a “large scale uranium endowment” with the high grade deposits near the surface to lower operating costs and ample infrastructure in the region. The company stands to benefit from its proximity to the European Union market, already committed to expand its nuclear energy generating capacity, although the commitment is far from universal across all the countries in the EU.

As far back as January of 2020 Boss Energy released a feasibility study for reopening its shuttered Honeymoon uranium mine in the Broken Hill mining region of South Australia. The company owns 100% of the mine, which it bought in 2015.

Boss recently changed its name from Boss Resources to Boss Energy, with its website now proudly anointing the company as “Australia’s next uranium producer.”

The Honeymoon mine is fully permitted with support from both the federal and state governments. In a corporate presentation from 11 March of 2020 the company expects to fast track production due to its low capital expenditures at USD$63.2 million, yielding 0.88Mlbs within 12 months. Production in the second year at Honeymoon is expected to be 2Mlbs with 3.2Mlbs in the long term.

Deep Yellow is pursuing an ambitious dual growth strategy, focusing both on developing its existing 100% owned Reptile Project in Namibia as well a “targeted merger and acquisition program.” The company also has one Joint Venture project – the Nova Project near Reptile — in the exploratory drilling phase. A Japanese government agency, the Japan Oil, Gas and Metals National Corporation (JOGMEC), is the JV partner. With an investment of AUD$4.5 million over four years, JOGMEC will earn a 39.5% stake in the project.

Deep Yellow completed a positive Scoping Study at the end of 2019 with prospects sufficient to warrant a formal pre-feasibility study with results expected in the December Quarter of 2020.