Can Hydrogen Recapture the Title of Fuel of the Future?

Hydrogen gas can trace its discovery back to 1776, with the first flight of a hydrogen filled “hot air” balloon in 1783. Science fiction novelist Jules Verne picturing its potential use as a transportation fuel in 1874. Verne’s dream morphed into reality with the advent of hydrogen powered balloons in the mid-1800’s and hydrogen airships in the 1920’s and later in the late 1950’s into the 1960’s by the United States National Aeronautics and Space Administration (NASA).

At the dawn of the 20th century hydrogen powered fuel cells to replace the pollution belching internal combustion engine (ICE) came to the fore, with US President George W. Bush pushing the US forward into a “hydrogen economy.”

Enter the acclamation of hydrogen as a disruptive “Fuel of the Future.”

There were multiple reasons for the excitement about the possibilities for hydrogen in a world slowly choking on its own air. Key among them was hydrogen as a fuel source has no carbon emissions. In addition, hydrogen is more efficient and the most abundant element on the planet.

The glimmer began to fade as the challenges of producing hydrogen came into play. First, hydrogen does not exist alone in nature, appearing instead in combination with other elements, notably methane, ammonia, and water.

Second, the process of freeing the hydrogen from its elemental prison required massive amounts of electricity, water, and rare elements in some cases. This is true regardless of where the hydrogen is trapped – with methane, ammonia, or water. To date, this has priced hydrogen fuel cells at a distinct disadvantage compared to lithium-ion batteries.

In addition to the cost, producing hydrogen from “dirty” sources of electricity generation like fossil fuels yields unacceptable levels of carbon emissions in a world in a race to reduce those emissions and their reported and generally acknowledged impact on global climate.

With the massive reductions in the cost of both solar and wind powered electrical generation, the promise may yet be realised with what is now hailed as “Green Hydrogen.” The green hydrogen method of production uses “electrolysis,” which is a process of applying direct electric current to get a chemical reaction, in this case splitting the hydrogen and oxygen found in water.

The following pictogram from the recode technology site of the US-based journalism and media site Vox.com sets out the different hydrogen production methods in a now generally accepted color-coding scheme. 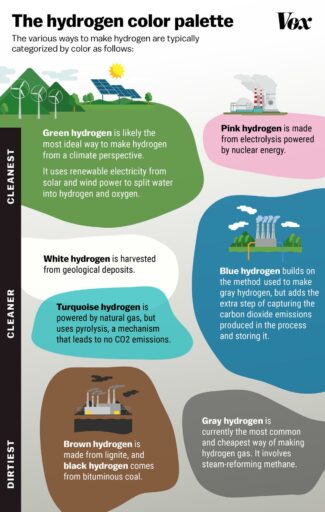 Brown Hydrogen is made from brown coal (lignite), while Black Hydrogen is made from black coal (bituminous). Gray Hydrogen comes from methane, using electricity to generate heat to separate the hydrogen from the coal. Blue hydrogen offers an emissions improvement by storing generated carbon emissions. Turquoise Hydrogen’s process requires less electricity than Green Hydrogen, but remains in developmental stages, largely in the US,, but from a start-up here in Australia as well – Pure Hydrogen (PH2). Source data from Balat, M. “Potential importance of hydrogen as a future solution to environmental and transportation problems,” from Volume 13 issue 15 of the International Journal of Hydrogen energy

Given the current dominance of heavy lithium ion powered Electric Vehicles (EVs), the significantly lighter hydrogen fuel cells should see growth in use with larger vehicles such as trucks, buses, planes, and ships. In addition, hydrogen as a fuel has industrial applications, from oil refining to steel production to ammonia used in agricultural fertilisers. Hydrogen fuel can power small devices such as mobile phones and laptops as well as large scale military applications and emergency power supplies in buildings.

In a country awash with coal, it should have come as no surprise to the rest of the world that Australia’s political leaders were reluctant to climb aboard the global stampede towards a goal of zero carbon emissions.

The just concluded federal election turned that situation upside down with the Labor Party’s commitment to clean energy accredited by some analysts as a principal reason for the outcome. In his victory speech, this is what Labor Leader Anthony Albanese had to say about the path ahead:

Investors who can recall the earlier declarations touting hydrogen as the fuel of the future well remember production costs as one of the issues dousing cold water on that prospect. Today, the much ballyhooed green hydrogen remains uncompetitive on cost not only with fossil fuel alternatives, but also with other hydrogen production methods.

A 2 February of 2022 report from global energy and resource consulting and research firm Woods Mackenzie makes the case that green hydrogen is the key to net-zero emissions.

WoodMac claims the cost disadvantage of green hydrogen can be overcome with a combination of government policies, investments, and technological advances. Implied, but unstated, it was not long ago that solar and wind suffered from similar cost drawbacks with those challenges having been met.

In 2018 AGL Energy (AGL) took the lead in a consortium of interests to develop a pilot project to produce brown hydrogen from the company’s Loy Yang coal mine.

The Australian and Japanese governments collaborated with Japan’s Kawasaki Heavy, forming the Hydrogen Energy Supply Chain (HESC) project to transport hydrogen from the Loy Yang mine. The consortium built a carrier ship for liquid hydrogen — the Suiso Frontier. On 31 January of 2022 the first shipment left Australia bound for Japan, which prompted the Australian government’s comments on “clean energy.”

The CEO of Fortescue Metals, Andrew Forrest, and others continued a battle of words with the now departing federal government over the reference to brown, black, grey, and blue hydrogen as “clean energy,” arguing that only green hydrogen qualifies as clean energy.

Fortescue was an early mover in the push to make the transition from brown or blue hydrogen to green hydrogen. The company established a subsidiary, Fortescue Future Industries in 2021. Fortescue has already committed 10% of the company’s NPAT (net profit after tax) to go towards funding multiple Fortescue Future initiatives in green technology production and infrastructure development. In FY 2021 the investment amounted to USD$1 billion dollars.

Promising news out of FFI is a joint venture arrangement with the University of Adelaide and ASX listed Sparc Technologies (SPN). In conjunction with the University of Adelaide, Sparc has developed a process for producing green hydrogen that eliminates the costs of large scale solar or wind farms and the electrolysers used to separate the hydrogen from the oxygen in water. Instead, the Sparc/Adelaide single step process uses direct sunlight in a photocatalytic process to split the hydrogen and oxygen.

FFI’s initiatives are global in scope, with a focus on total production capabilities of fifteen million tonnes of green hydrogen per year by 2030.

In October of 2021 Woodside Energy announced plans to build a $1 billion dollar plant in Western Australia to produce both blue and green hydrogen and ammonia. Initially the hydrogen production will be two thirds blue and one third green.

In November of 2021 Woodside announced the purchase of land in Tasmania with suitable wind and hydropower in the area for the production of green hydrogen and ammonia.

In December of 2021, the company announced plans to build a green hydrogen producing facility in the US state of Oklahoma, using existing solar and wind power generating capacity in the area to produce green hydrogen.

On 28 February of 2022, Origin Energy (ORG) announced its intention to develop the Hunter Valley Hydrogen Hub in New South Wales. Origin has sufficient renewable energy generating capacity to power the electrolyser needed for production of green hydrogen and green ammonia. According to the company, the design of the project will enable future expansion in production capacity.

All of these big companies have existing revenue streams. While green hydrogen remains the primary focus for the future, the blue hydrogen production expected from the Woodside project remains a mainstream providing source.

The following table includes metrics for these companies relevant to investors with moderate to low risk appetites. 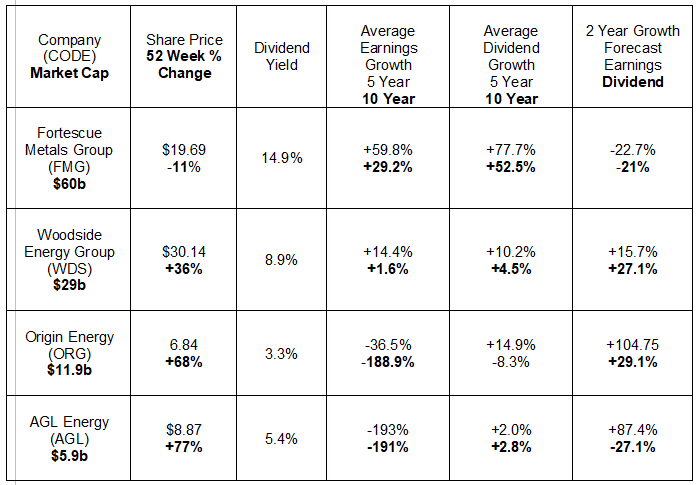 There are other small caps planning green hydrogen operations of interest, besides Sparc Technologies. The ASX also includes other early stage companies involved with other “colors” of hydrogen, as well as a few working on innovative production processes and infrastructure needs.

However, should the Fortescue/Sparc/Adelaide joint venture prove commercially feasible, the cost savings of eliminating both the renewable energy providers and the costly electrolysers would put that JV at the forefront of what green hydrogen needs to become the fuel of the future – cost competitiveness.

In April of 2022, Global Energy Ventures (GEV) changed its name to Provaris Energy (PV1) to reflect the company’s transition into a provider of integrated renewable energy sources for export using the company’s GH2 carrier for the transport of compressed hydrogen. Completion of scoping and feasibility studies on the carrier are anticipated by July of 2022 with ship construction to begin in mid-2023.

The company has an MOU (memorandum of understanding) in place with Province Resources (PRL) to participate in the Provaris feasibility study with the aim of using the GH2 for transport of green hydrogen from Province’s HyEnergy™ green hydrogen project.

Provaris has a green hydrogen project on the Tiwi Islands off the Northern Territory. Although the combination of production and export capability within the same company seems attractive, the Tiwi islands project is in very early stages of development, with nothing in place beyond the land on which the solar sources and production facilities will be built.

Frontier Energy changed its name from Superior Lake Resources and its focus from zinc and uranium to solar and green hydrogen, relisting on the ASX in March of this year trading as FHE.

The company’s new flagship asset is the Bristol Springs Solar Project in Western Australia. Although the solar power needed is under development, Frontier has already contracted an outside consulting firm to study the feasibility of green hydrogen production at Bristol Springs.

Following that announcement, Frontier jumped on the Western Australian government’s commitment to replace diesel fuel with renewable hydrogen and announced its plan to construct the first of its kind hydrogen refueling station in Perth.

Frontier has outperformed the share price of the other start-up companies mentioned in this article since the company relisted in March. From the ASX website: 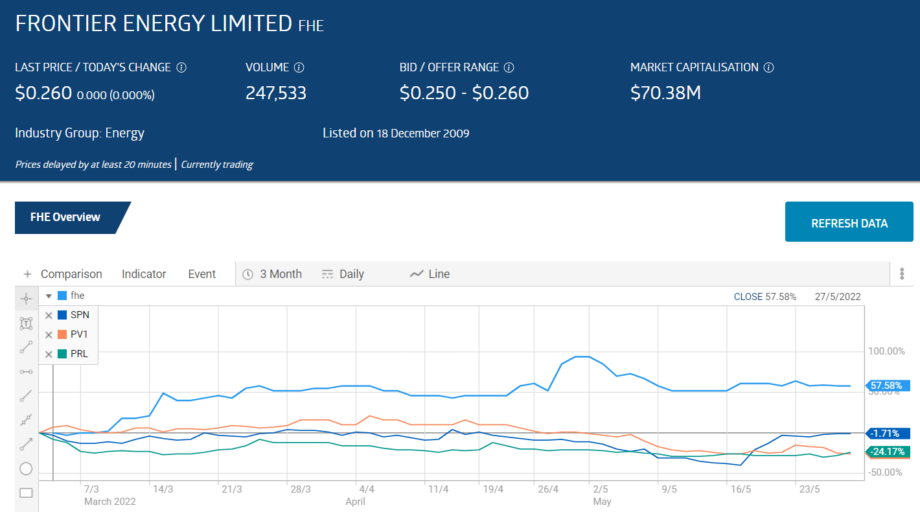 Among the stocks on the ASX for an entire year, Sparc Technologies led the way, perhaps due to the company’s potential for driving down the cost of producing green hydrogen. 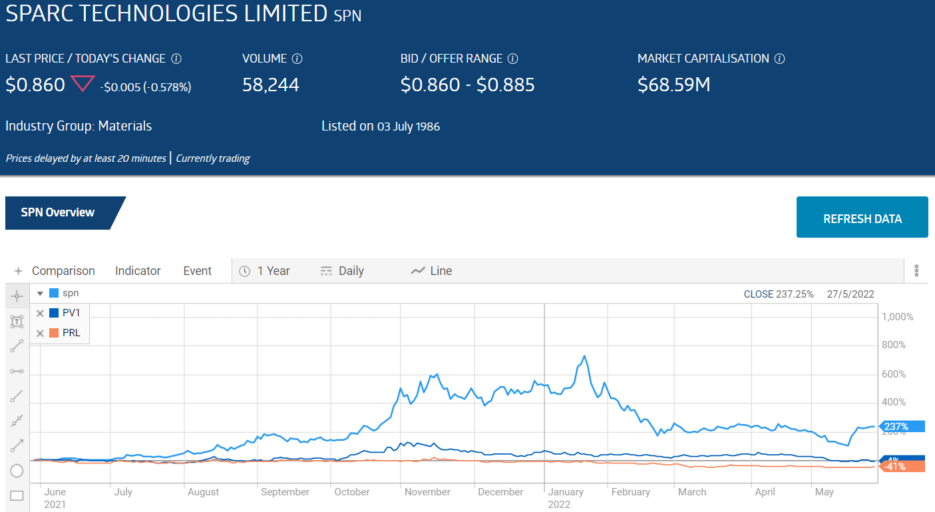 The start-up company developing Turquoise Hydrogen is the Pure Hydrogen Corporation Limited (PH2). The company has a binding agreement with Plenesys, a French technology company to commercialise the HyPlasma process developed by Plenesys.

HyPlasma is a methane pyrolysis process that can split methane from natural gas into hydrogen and solid carbon. While pyrolysis relies on electricity, the process uses between four and eight times less electricity than electrolysis, giving turquoise hydrogen a cost advantage.

The company will construct a demonstration plant in Brisbane followed by portable modules suitable for commercial use.

Here are the market caps and last closing share prices for the small-cap start-ups:

Can Hydrogen Recapture the Title of Fuel of the Future?

Hydrogen gas can trace its discovery back to 1776, with …