On 4 March Australian investors breathed a sigh of relief after GDP (gross domestic product) topped expectations for the December Quarter with a reading of +0.5%. For the calendar year 2019 the GDP of 2.2% maintained the country’s stellar record of 28 years of consecutive economic growth.

However, some economists are reminding us while we may have withstood much of the impact of the droughts and bushfires, the full impact of the coronavirus remains an unknown.

Investors scoffing at economists who got the December Quarter GDP forecasts wrong should consider the government’s response, with a 5 March announcement of an economic stimulus package in the multi-billion dollar range focusing on tax-relief as well as direct cash injections, tax forgiveness, and wage assistance.

Global stock markets continue their “on again, off again” response to the prospect of a potential global economic recession in what appears to be a reluctance to get in the way of a rampaging bull market.

Uncertainty seems to be fueling the falls, with expert speculation on the economic impact of the coronavirus fueling moves in the absence of any firm data points.

As February 2020 came to a close, global investors learned the official Chinese government Manufacturing Purchasing Managers’ Index (PMI) for February fell to 35.7, lower than the estimated 45. The Non-Manufacturing PMI dropped to 29.6.

The following graph from the Financial Times website shows these readings eclipse the prior historic lows in the immediate aftermath of the GFC. 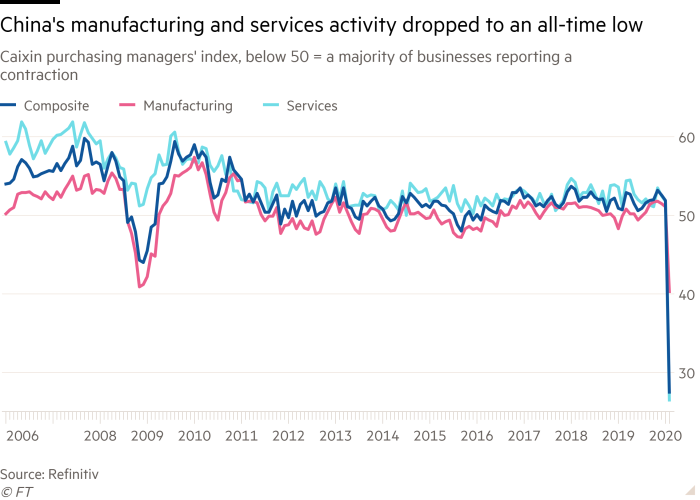 The data point was reported in the financial press and then faded into obscurity with little, if any, follow-up reports.

Some commentators make the argument the downturn will be short-lived as the coronavirus will not last forever, and they may be right. Panic selling at this point is an ill-advised strategy, but some experts are also cautioning against buying on the dip right now.

For investors with nerves of steel, there is one ASX sector not likely to see declining revenues and profits, although the share price may drop in the carnage. That sector is the defence industry, with companies exposed to the massive US defense market the lowest risk choices.

The case is well made by the following chart, appearing in a September 2019 article here on the bull.com.au. 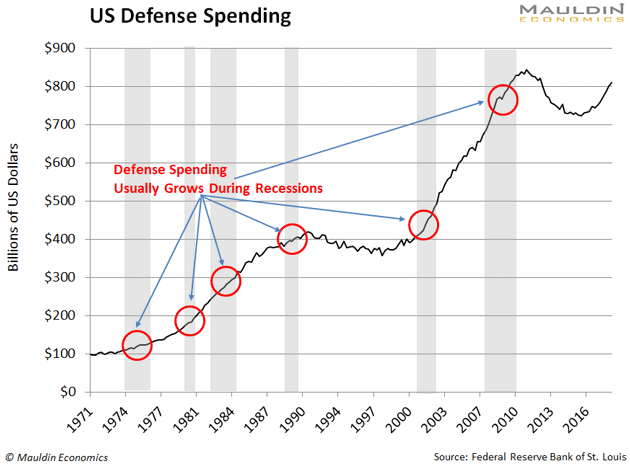 There are five defence industry stocks on the ASX with varying degrees of exposure to the US defense market. The following table lists the five ranked by market cap. 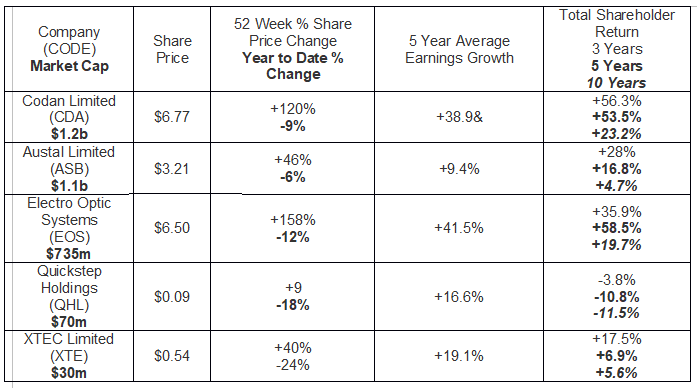 All of these stocks came into the current market selloff with solid year over year share price appreciation and all have seen those gains wiped out. The question risk tolerant investors need to ask is will the nature of their business protect the share price should economic conditions continue to deteriorate.

Founded in 1959 and listing on the ASX in 2003, Codan Limited (CDA) designs and manufactures electronic products and related software, serving an international customer base. Codan electronic solutions are in use at mining companies, government organizations, security companies, military groups, and other organizations

The company has three operating divisions:

For most investors, Codan’s heavy presence in mining in general and gold mining in particular adds a layer of safety. The company’s reach into the defense sector at the present time is limited to its broad array of suitable communications equipment.

Mining products from Codan include commercial and recreational metal detectors and GPS tracking software for underground mining. The company’s Half Year Results were record setting, although investors were disappointed by the lack of guidance for the second half of 2020. Revenues for the half year were up 34% and the 37% increase in net profit after tax (NPAT) was record setting. Codan is a dividend payer with a current yield of 1.3%, and 5-year average dividend growth of 36.1%.

Austal Limited (ASB) is a shipbuilder for defense and commercial use. The company designs, builds, and supports maritime vessels with a heavy presence in navel vessels. In addition to the US Navy, Austal serves defense maritime operations here in Australia, and in Oman, Malta, Trinidad and Tobago, Bermuda, Yemen, NS Kuwait. The company also builds patrol boats for police use.

The company’s financial performance over the last three years has seen revenue increases and stellar profit increase in each of the last three years. NPAT of $15.3 million in FY 2017 more than doubled by FY 2018 with profit of $39 million and rising to $61 million in FY 2019. Half Year 2020 results showed record revenue, up 22% year over year, along with NPAT increasing 72%.

Electro Optic Systems (EOS), founded in 1983 and coming to the ASX in 2002, operates in the defence and space sectors. The company has manufacturing operations here in Australia and in the United States, as well as operations in Singapore, Germany, and the United Arab Emirates (UAE).

In the defense sector, the company specialises in remote controlled systems for a variety of gun platforms, some of them allowing the company to claim the title of world leader in counter-drone technology. Counter-drone technology is jargon for the ability to shoot drones out of the sky. The company’s remote weapons systems (RWS) allow the operator to fire from safe locations outside the platform. In the space sector, the company offers satellite infrastructure and tracking systems.

The company’s Full Year 2019 Financial Results continued Electro Optic Systems’ pattern of spectacular revenues reported and improving profits over the prior fiscal years. For FY 2019 revenues were up 91% while profit went up 20%.

Management’s outlook was more than optimistic, first commenting that only part of EOS’s current technology pool has so far been deployed to market. Development of new technology continues which provides future growth and barriers to entry for EOS competitors its technology

The company has a delivery backlog of $620 million with $3.1 billion of potential contracts in its pipeline. Guidance for fiscal year 2020 was reaffirmed, with forecasted EBIT (earnings before interest and taxes) of 70%.

Quickstep Holdings (QHL) is the only stock in the table showing negative total shareholder return. However, in FY 2019 the company continued its pattern of rising revenue over the last three years and turned successive losses into a profit in FY 2019. Half Year 2020 Financials showed less than one percent declines in both total revenue and profit, but the company’s sales were up 14%. The company expects continued sales growth and positive NPAT for the full year 2020.

The company has a patented process – Qure — for creating advanced lightweight carbon fibre composites for use in multiple business sectors – aviation, automotive, defense, rail, and other manufacturing operations.

Quickstep is working on a new process designed to meet the more rigorous standards for the Aerospace industry called AeroQure.

Although Qure currently is used primarily in the aviation sector, the company is expanding into healthcare with portable wheelchair ramps and lightweight carbon fibre chasses for portable X-Ray machines.

The company counts among its customers some of the world’s biggest defence manufacturers, including

The global F-35 Joint Strike Fighter (JSF) uses composite parts from Quickstep as does Boeing in its F15 and F18 military aircraft. Quickstep has a partnership with Italian manufacturer of composite component parts with an eye on entering the automotive market. The company had a successful capital raise in Q1 of 2019.

The company’s body armour is used by the military and the police, in addition to helmets and ground and air vehicles. Xtek has seen significant revenue growth over the last three fiscal years while posting very modest profits. The Half Year 2020 results doubled revenues and doubled its Half Year 2019 loss. The revenue increase was an impressive 91%, and a company record.

In 2019 Xtek acquired US based HighCom Armor Solutions Inc). The successful integration of HighCom resulted in the launch of three new ballistic products in the US at SHOT Show® in January 2020.

With one hour to go in the end of week trading on 6 March in New York, the DJIA (Dow Jones Industrial Average) was down 822 points.

On 4 March Australian investors breathed a sigh of relief …