Defence Stocks to Weather the Storm

On 6 December of 2018 newcomers to share market investing may have been exposed to the term “yield curve” for the first time. The article appearing in thebull.com.au entitled “The ‘curve’ that drives Wall Street crazy” pointed to the yield curve as a possible indicator of an economic recession on the horizon.

The curve plots the difference in yield, or interest earned, between long-term and short-term US treasuries and others, with the difference between the two year and the ten year generally seen as the most significant.

Investors move to fixed income government securities for safety, with US securities deemed the lowest risk. The price of these securities rises when demand goes up, driving yields down. At the time of the article the curve was flattening, but investors were coming concerned about the possibility of an inverted yield curve, where short term yields exceeded long term securities.

On 14 August, the curve inverted, but market bulls dismissed the event since the inversion was brief. In the last week the curve inverted and has remained so, causing market bulls to argue against the predictive quality of an inverted yield curve, which has predicted every US recession over the last fifty years, save one. The argument is that low and even negative yields around the world are spurring foreign investors to flood US markets, artificially driving down yields.

Some market observers refute this argument, claiming low and negative global yields are signs of concern about recessionary pressures world-wide.

In the events leading up to the GFC, some warning signs were there, with most market observers failing to take them into account. Once the crisis reared its ugly head, many investors followed conventional wisdom of looking for “recession proof” stocks. The GFC turned conventional wisdom on its head, as historically defensive stocks collapsed.

In Australia the big-name healthcare stocks were spared much of the carnage but in the US one business sector not only survived but thrived.

A 15 March article appearing in marketwatch.com entitled Defense stocks make their name by providing protection for investors highlights a fact that may surprise some investors. The US got hit hard by the GFC, with domestic investment falling 30.1% and consumer spending sliding 8.2% between 2008 and 2009. During that same period defense spending in the US increased 12.1%, with additional increases in 2019 following cutbacks in 2011. The following graph shows the surprise – during five of the last six recessions in the US since the 1970’s defense spending increased. Note the recessions are highlighted in gray on the graph. 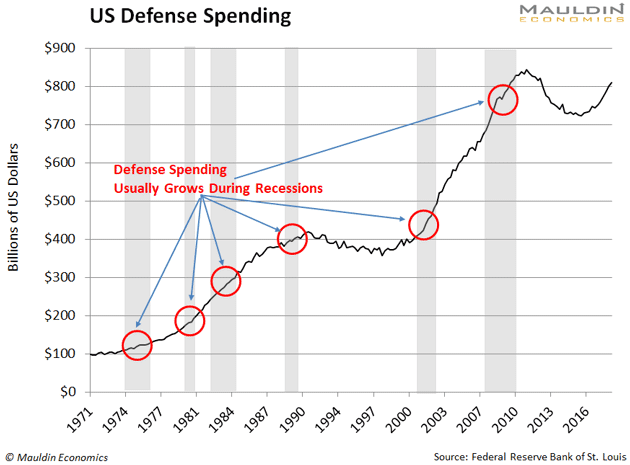 While defence spending in Australia of $26.7 billion dollars in 2018 lagged far behind US spending of $649 billion, as a percentage of GDP Australia ranks in the top ten, spending more than Canada, Germany and the UK. As shocking as it may seem, we devote the same percentage of our GDP to defense spending as do the Chinese. Major US defense contractor stocks were not spared some pain in the GFC but rebounded within a year. Two of the biggest defence stocks on the ASX – shipbuilder Austal Limited (ASB) and electronic detection and communication producer Codan Limited (CDA) began to recover from a GFC dip within a year and have climbed higher ever since, not without volatility.

Like their larger US counterparts, both these companies have taken their investors on a bit of a roller coaster ride, but over time the rewards have been outstanding. Over a five-year period Austal is up 575% and Codan is up 170%; over three years Austal is up 241% and Codan 155%.

There are other players on the ASX with some exposure to US defense spending. The following chart looks at four stocks worthy of a look.

Austal builds both commercial and defence ships and offshore platforms. For defence purposes the company builds Expeditionary Fast Transport Vessel (T-EPF) and others. ON 28 August the company announced its 11th such vehicle had successfully passed the US Navy acceptance trials. The latest ship will be in use by the end of the year, with an additional three Expeditionary Fast Transport Vessels under construction in the company’s shipyard in Mobile, Alabama in the US.

Austal has contracts with the US Navy for 19 Littoral Combat Ships (LCS), with ten already delivered, five under construction, and the remaining four yet to begin construction. An LCS is a mid-sized combat ship most suitable for close to shore operations.

Austal has shipyards here in Australia and in the Philippines, with expansion into Viet Nam in the works, and is a major builder of passenger and passenger-vehicle ferries. In addition, the company offers custom designed, installed, and maintained command and control systems and radar and communication systems. Austal also offers vessel support and maintenance services. The company recently was awarded a USD$23 million-dollar contract from the US Navy for maintenance of the USS Tulsa, adding to an early January contract for US$21 million dollars for the maintenance of the USS Manchester, both LCS ships.

Codan is significantly more diversified in what it offers than Austal, with four operating divisions – Communications; Tracking Solutions; Metal Detection; and Defence Electronics.

The company’s Full Year 2019 Financial Results posted both record sales of $271 million and record statutory net profit of $45.7 million. In addition to its annual dividend payment of $0.09 per share Codan announced a special dividend of $0.05 per share, both fully franked.

Codan has manufacturing and corporate offices in Australia and Canada, as well as representative offices in USA, UK, Ireland, China, United Arab Emirates and India. The company’s Defence Electronics Division is relatively small, serving the Australian Defence Industry. Codan’s main product lines in radio communication, metal detection, and tracking are employed by both civilian businesses and the military.

Codan’s primary exposure to the defence industry is through its “mission-critical” communications equipment. The company’s existing Codan RIOS™ interoperability platform allows communication across mixed and “old-tech” networks. The company has a new product to launch in FY 2020 — the Sentry® Military Manpack which will enhance mobile communications capability for tactical military units.

Shareholders of both Austal and Codan must be pleased with the performance of the stock price year to date.

Electro Optic Systems is a global leader in remote weapons defense systems as well as telescopes, domed observatories, laser satellite tracking and missile defence systems for the aerospace industry. This stock qualifies as a kind of “buy one get two” offering with its exposure to both military defence and aerospace.

The company’s unique weapons systems reduce the dangers of soldiers at the front lines with their capability to be fired remotely from within armoured vehicle mobile gun platforms, and from unmanned armoured gun turrets. The firing system can be mounted on a variety of gun platforms.

The company has customers in Australia, Singapore, Germany, and the US. Electro Optic Systems has a contract with the biggest defense contractor in the US – Lockheed Martin – to jointly develop space tracking sensors. The company began in 1983 and listed on the ASX in 2002, with a milestone agreement for a strategic alliance with another of the top ten US defense contractors – Northrup Grumman. The alliance was to promote common technologies of both companies in the military and aerospace sectors. Northrup remains the largest shareholder of EOS, with an 8.2% stake.

Quickstep Holdings achieved market darling status when the manufacturer of carbon fibre composite materials was chosen by Northrup Grumman to supply its composite materials for the construction of the much-heralded F-35 Lightning II Joint Strike Program. The aircraft is slated for use by all branches of the US military and allied navy and air forces around the world, including the United Kingdom, Italy, the Netherlands, Canada, Turkey, Australia, Norway, Denmark, Japan, Israel and South Korea. Initial estimates claimed by 2035 about 5,500 planes would hit the skies.

US contractor Lockheed Martin is leading a team of industry contractors in the development of the aircraft.

As cynics would expect from an array of defense contractors, the project has run into delays and cost overruns, souring the investor appetite for QHL shares. However, much to the delight of remaining investors, the stock price got a big boost with the announcement of the Half Year 2019 Financial Results, showing a 21.5% revenue increase and a massive profit turnaround, from the Half Year 2018 loss of $2,929,000 million dollars to a profit of $886,000, a turnaround of $3,815,000.

Neither company is generating significant revenue, much less a profit, but they both have investor interest year to date.

It is a sad fact that many technological innovations are diverted from their primarily beneficial purposes to things unethical or even borderline criminal. The advent of social media was intended to bring people together, but today is increasingly used to drive people apart. Drones are wreaking havoc around the world in many ways, especially in the Middle East. DroneShield has developed software and hardware technology to detect and in some cases to disable drones. Essentially it is a “counter drone” operation in a nascent market with significant potential.

Xtek provides high-tech security products to the military, police forces, and other government agencies. The company has four business units targeting explosive ordinance disposal, forensics, small unmanned aerial systems, tactical and protective solutions, and composite materials. Xtek is on the cusp of penetrating the US market with its body armour using its XTclave™ technology.

Defence Stocks to Weather the Storm