Billion Dollar Companies with Price to Earnings Ratios Under 10

The stock market is not the economy.

Many market experts would strongly object to the validity of that adage, pointing to multiple times throughout investing history when stock markets have declined in the face of economic slowdowns or uncertain circumstances.

However, a recent opinion piece making the rounds of Australian financial news websites entitled the S&P 500 nears its all-time high. Here’s why stock markets are defying economic reality concludes rising markets in the face of what many agree is the worst financial crisis in recent memory support that premise. US financial websites are also exploring the disconnect between moderately improving but still troubling economic conditions and rises in US and global markets.

In short, the argument goes the stock market is about the future, not the present, and investors see stocks as the best investment bet on the future. Investors clinging to that argument would do well not to ignore a phrase buried within most of those optimistic outlook pieces — provided the virus is contained.

As evidence mounts here in Australia and around the world that the virus is far from contained, prudent investors would be wise to adopt long term strategies that look for the broader growth potential of the market in which a targeted stock operates once the coronavirus pandemic eases. It also suggests the classic “buy on the dips” and value investing strategies to minimise losses in the event the pandemic worsens or persists longer than expected.

The advice to beware of “value traps” in stocks fallen by the wayside that are not likely to recover suggests avoiding a sector hit hard by the lockdowns – retail outlets with physical stores. Conventional wisdom is that the rush out of brick and mortar stores to online sellers will increase in the future. Yet the past few weeks have shown at least two such outlets that have prospered due to their strong omni-channel presence.

City Chic Collective (CCX) is a niche fashion retailer specialising in clothing and footwear for plus-size women along with related accessories. The company boasts around 200 locations across Australia, New Zealand, Europe, and North America. In late May City Chic issued a COVID 19 trading update announcing its already strong online presence had seen a 57% sales increase comparing the period since store closures commenced this year with 2019 sales over the same period. Astute bargain hunters could have taken notice the company generates two thirds of its revenue from global online websites and took the risk when the stock price cratered in late February.

The company is actively expanding its online presence and has existing wholesale partnerships with major retailers in both the US and the UK.

In late 2019 the company added to its existing online presence with the acquisition of online furniture retailer Mocka.

On 10 August, the company announced Full Year 2020 Financial Results with perhaps the biggest surprise being the less than feared decline of 7.3% in physical store sales. Online sales increased 110.5%. Total revenues for the year were up 12.7%, while net profit after tax (NPAT) was up 19.2%. There are other retailers with a strong presence in physical store locations that fared well once stores began to reopen.

As retail outlets closed down at the onset of the pandemic the shares of both companies collapsed but remain wildly positive year over year. 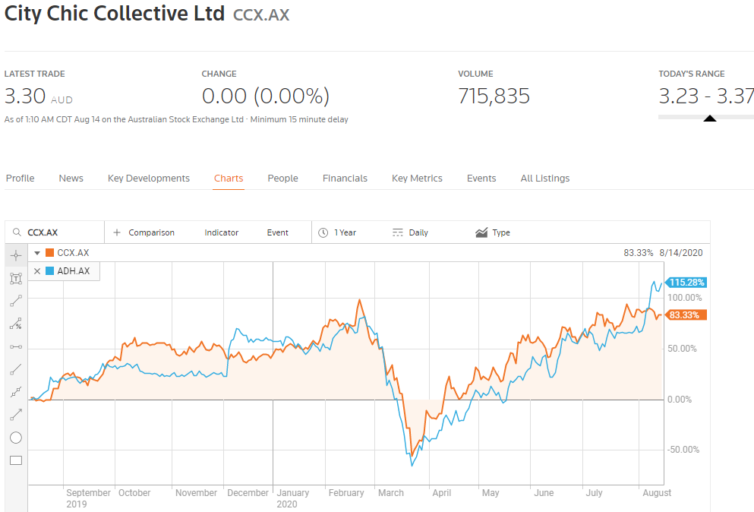 The following table includes historical performance and future growth measures for both retailers.

The Price to Earnings Ratio (P/E) is a favorite metric for value driven bargain hunters, with some caveats many investors ignore.

First, P/Es vary by industry so a low P/E for a targeted stock must be taken in context with the average P/E for the sector in which it operates.

Second, the “earnings” used in calculating the ratio come from either from prior earnings reported or forward earnings forecasted by analysts. Financial websites that include a stock’s P/E Ratio do not always differentiate between trailing P/E – actual reported – and forward P/E based on estimates that could be wrong.

Third, many articles explaining the P/E Ratio tout the addition of projected earnings growth in the ratio, creating a P/EG or price to earnings growth, which very few financial websites include in their listed valuation analysis of a particular stock. A P/EG under 1 is considered a potential bargain.

In truth, a low P/E Ratio should be a starting point for further research, including assessing the overall outlook for the sector in which the company operates.

The following table includes stocks with market caps over one billion dollars with respectable historical performance metrics and future growth estimates. The listed P/Es and market caps are from the ASX website while the remaining metrics are from Morningstar.com.au. and the share price performance is from yahoo finance Australia. All the P/Es are markedly lower than the average P/E for the sector in which they operate. 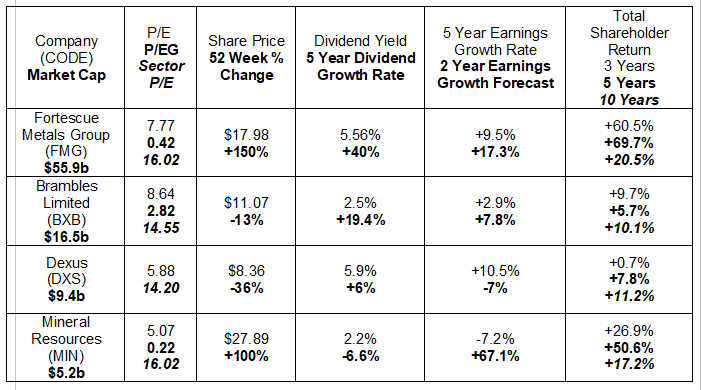 In the midst of production downturns in other iron ore exporting countries Australian production has remained stable, much to the benefit of the largest pure play ASX iron ore miner – Fortescue Metals Group (FMG).

On 14 July China Customs announced a 35.3% increase in iron ore imports there in the month of June, sending the already rising price of iron ore on another upward spike. 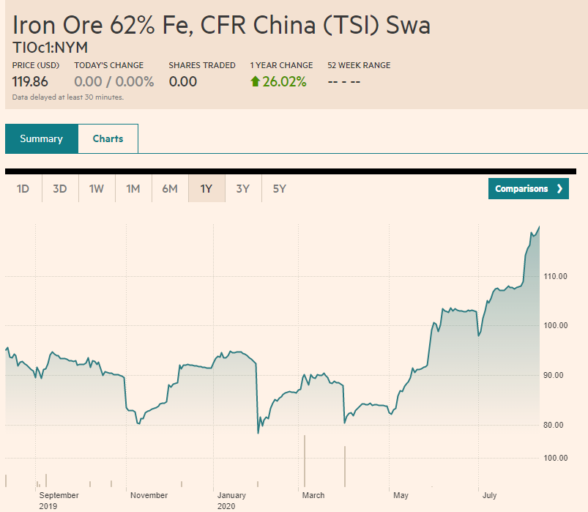 On 30 July Fortescue announced its Q4 Results, highlighted by record level shipments for the quarter along with a 6% increase in shipments for FY 2020. Full Year 2019 Financial Results dwarfed the prior rear, reporting revenues of USD$14 billion dollars versus $USD$9 billion and net profit after tax of $4.5 billion version $1.8 billion. Fortescue has shed its once dubious reputation for outsized debt, now reporting cash on hand as of 30 June of USD$4.9 billion dollars and net debt of USD$0.3 billion.

Brambles may not have the most impressive metrics, but the company operates in a critical sector – supply chain logistics – with a unique “circular” business model employing pallets and shipping containers that are used and then reused and reused again. Pallets and containers are used and then returned to Brambles or transferred to another Brambles customer for their use.

The company is global in scope, with operations in the Asia Pacific Region, North America, Europe, Latin America, Africa, India, and the Middle East.

Half Year 2020 Financial Results were solid, if not spectacular, with a 7% rise in revenue and a 6% increase in profit. On 17 April, the company released its Q3 Results, which were marginally impacted by the pandemic but Brambles management in expectation of more challenging conditions due to global business lockdowns in Q4 did lower its Full Year 2020 guidance.

Dexus creates, owns, and manages industrial and commercial workplaces for office and industrial use as well as managing property for third party entities in the industrial, office, healthcare, and retail sectors. All properties are strategically located within the central busines districts of Sydney, Melbourne, Brisbane, and Perth.

The company’s 2020 Half Year Financial Results were impressive, with a 28.1% revenue increase and a 36.9% rise in profit. Dexus has issued COVID 19 market updates twice.

On 26 March, the company withdrew its guidance for the Full Year 2020 while pointing to its strong financial position.

On 5 May, the company announced a series of cost reduction measures in the face of “challenging” conditions, key among them reductions in salaries at the executive level, including the CEO. However, the Dexus management also announced the March leasing of an additional 22 industrial spaces and 62 office spaces.

On 24 June Dexus released the results of an external valuation assessment of the company’s property portfolio for 107 properties out of the total portfolio of 118 properties.

The 42 office properties declined 1.5% based on expected conditions over the next twelve months while the 65 industrial properties saw their assessed valuations decline by 0.7%. Management attributed the encouraging results in the face of the economic fallout from the pandemic to “high occupancy levels, diversified tenant base, the quality of the portfolio and investment attractiveness of the asset class, and limited new supply coming online in our key office markets.”

Mineral Resources (MIN) is a diversified miner and provider of mining services, with mining operations in iron ore and lithium in Western Australia. The company has a licensing agreement with ASX listed Hazer Group (HZR) to use the Hazer Process to produce synthetic graphite from iron ore and natural gas.

On 24 July, the company released its update for Q4 of 2020, informing investors Mineral Resources had experienced no impact from COVID 19 other than the safety measures taken to protect its employees. Q4 iron ore production set a company record and total iron ore shipments for FY2020 were up 33% over 2019. The Mt Marion Lithium Project also saw record shipments.

Mineral Resources entered into agreements during the quarter with BCI Minerals (BCI) to acquire one iron ore project from BCI and engage that company in extending the mine life of another.

Billion Dollar Companies with Price to Earnings Ratios Under 10

The stock market is not the economy. Many market experts would …