A Strategy For Stock Hunters

Once the decision has been made to look to stock markets as a place for investment dollars, all retail investors face the same choice – decide for yourself what individual stocks in which to invest or delegate the decision to others. The latter option does involve some research and decision making choosing exchange traded or mutual funds, but once done, research becomes a matter of keeping up to date.

Fund investing lets retailers diversify their investment dollars into a “basket of stocks” with all sharing some common criteria, such as sector, country, size, or dividend payments. Those who take the time to research thoroughly know the trade-off between fund investing and choosing your own stocks is reduced risk and reduced rewards. In any basket of stocks some will outperform, and others will underperform, lowering the overall rate of return on one’s investment dollar, but with less risk of losing much of that investment.

Investors who pick or “hunt” for their own stocks can choose to build a portfolio of high potential performers, assuming they are willing to accept the risk. Stock picking is not for the faint of heart nor for those who lack the time and talent required to wade through the wealth of information available in the modern investing climate. Uppermost in the minds of many retail investors engaging in this quest is where do I go for investment ideas.

Depending on one’s investment approach, following the fortunes of stocks outperforming can be a solid strategy. A corollary to this approach is to spot those outperformers operating in markets with substantial growth potential and look for other companies operating in the sector, sometimes with complementary product offerings.

As a case in point, let’s look at two of the best performing stocks on the ASX over the last decade, oddly enough with neither headquartered here in Australia.

Both companies have been market-beaters over the last decade, with share price increases exceeding 500%. The following price performance chart is from the Reuters financial website.

On measures of major importance to most investors – rates of return – both companies have turned in outstanding rewards for their long-term investors.

The strategy employed by some investors is to focus on the broader growth potential of the market where these performers operate – respiratory diseases. Both treat a niche in that broader world – sleep apnea, but there are others providing differing products and services. COPD does not generate the kind of attention in the information world of today as does heart disease and cancer, but many would be shocked to learn COPD is the third largest killer on the planet, and of the top ten causes of death, four are respiratory-related.

The following graph comes from a 2018 WHO (World Health Organization) Report. The report states of the 56.9 million deaths occurring in 2016, 54% came as a result of these top ten causes. 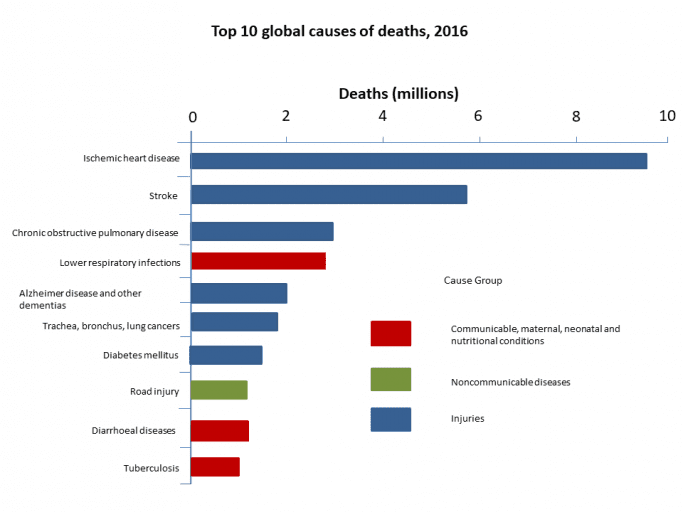 Regular investors in the healthcare sector know that diagnostic device stocks face fewer regulatory approval hurdles than treatment stocks. In addition, diagnostic devices have larger pools of potential users than those in need of specific forms of treatment.

Only two of these companies are generating minimal revenue and not yet profitable, making short term debt an investor concern. The current ratio measures the company’s ability to cover its short-term obligations should setbacks force lenders to call their loans or other unforeseen occurrences cut into the company’s ability to meet its short-term debt repayments. A ratio above 1.5% is considered safe.

ResApp Health Limited (RAP) is developing smartphone apps to diagnose respiratory diseases. Using machine learning algorithms (artificial intelligence), the app can analyse a cough to provide both a diagnosis and the severity of the condition. 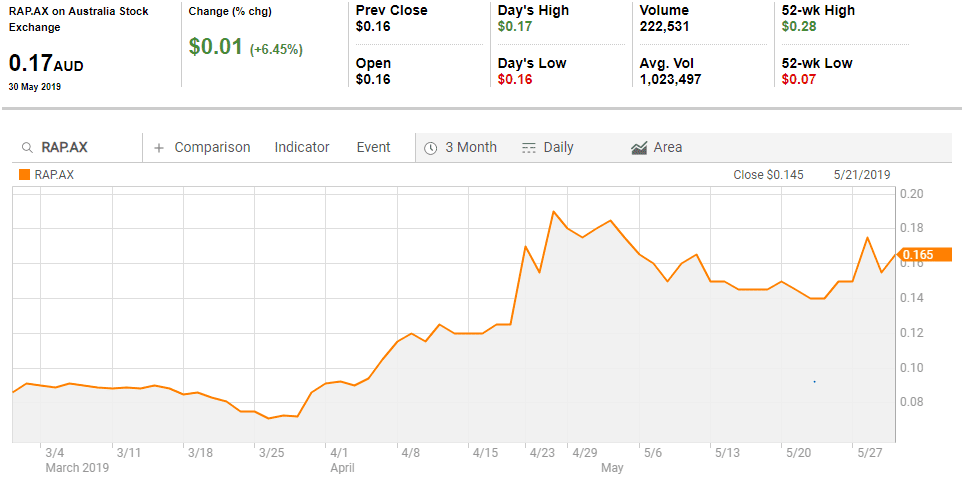 On 29 March the company came out with two announcements that should pique investor interest.

First, ResApp has contracted with a UK-based consultancy to work with OSI Electronics, a medical device manufacturer in the UK, to incorporate ResApp artificial intelligence apps into wearables and other hardware devices.

Second, the company is in the final stages of reviewing its De Novo submission to the US FDA (Food and Drug Administration) for ResAppDx-US, a mobile software application for the diagnosis of paediatric respiratory disease using cough sounds.

A De Novo submission is a special classification used by the FDA for “novel” devices – those low risk devices with no comparable device on the market. The company is not yet generating revenue. ResApp has an OUTPERFORM rating from one analyst, according to Reuters, as does the next stock in our table — Pharmaxis Limited (PXS).

The company is diversified, with treatments for other diseases in its development pipeline following a unique business model. Pharmaxis brings a drug or treatment along through successful Phase 1 or Phase II clinical trials and then licenses the drug to a large pharmaceutical company. Its first such deal came in 2015 with Pharmaxis licensing an anti-inflammatory drug candidate to global pharmaceutical company Boehringer Ingelheim. That company conducted two Phase 2A trials in 2017 using the Pharmaxis drug candidate for treatment of NASH (a type of nonalcoholic fatty liver disease or NAFLD) and diabetic retinopathy, netting Pharmaxis licensing payments of $AUD27 million dollars and AUD$15 million dollars. The company is generating revenue and posted a modest profit of $6.4 million dollars in FY 2018.

Tiny Adherium Limited (ADR) listed on the ASX in August of 2015 to great fanfare and opened trading at $0.55, 10% above its issue price, closing at $0.55 and it has been all downhill since.

Adherium got out of the gate with a long-term supply and development agreement with global biopharmaceutical company AstraZeneca for its Smartinhaler platform. The platform could be configured to work with existing treatment devices for asthma and COPD to monitor and improve disease management. Adherence to a treatment schedule is a common problem in healthcare, one addressed by Smartinhaler.

Shortly after listing the company announced the findings of three clinical studies demonstrating the positive effect of using the Smartinhaler in paediatric asthma treatments. Despite a stream of positive news surrounding the efficacy of Smartinhaler Adherium’s financial performance lagged and so did the stock price.

The Full Year 2017 Financial Results Report was filled with positive news about the continuing relationship with AstraZeneca and entry into new markets, but despite a small revenue increase, losses increased 103%.

The latest financial results released were for the Half Year 2019 and continued the pain for investors, with revenues dropping 63% and losses increasing 74%. However, the innovative technology developed by this digital health company may be on the verge of paying off.

Adherium has rebranded Smartinhaler into the Hailie™ sensor, approved for over the counter (OTC) sales in the US. Hailie™ uses Bluetooth wireless technology to augment existing inhalers, sending usage data to a smartphone app enabling patients and their doctors to monitor and manage their use of their medication.