In a simpler world, “reality” would present a single face. It is arguable whether the world has ever been “simple,” but few could debate the complexities of the times in which we live. Today reality can present multiple faces, further distorted by perceptual filters.

On the morning of 21 May in the US, where trends for the entire world often emerge, the release of weekly unemployment figures provided evidence for a dual reality.

The dual reality is that unemployment claims, though in decline, are persisting at significantly elevated levels. 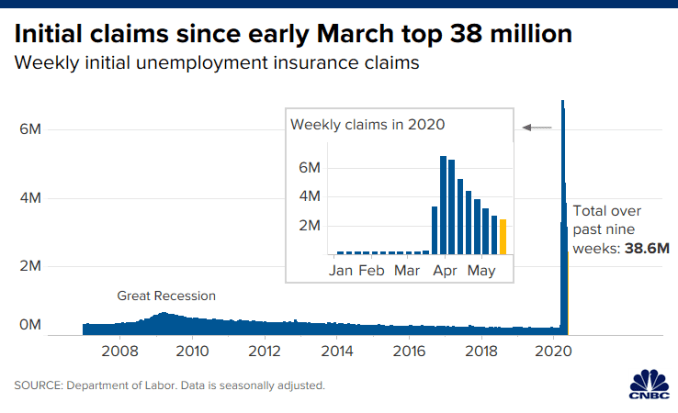 The same dual reality case can be made for the status of the COVID-19 pandemic. While cases and deaths are declining in much of the world, they are not going away. People are still getting sick and some are dying. Investors seem to be accepting the reality of the decline and ignoring the reality of the continuation of the impact of the pandemic with an eye towards what many see to be the ultimate answer – a vaccine.

Positive news on progress in the development of a viable vaccine is met with rising markets, declining later when contrary news emerges. Early in the second week of May investors were buoyed by the news out of US drug manufacturer Moderna (NASDAQ: MRNA) about successful early results in its study on a potential COVID-19 vaccine in development. Share markets rallied wildly, only to collapse in days as other experts reported that Moderna’s trial data did not provide the critical data needed to assess its effectiveness. In a rare reversal of form, the ASX 200 did not follow the lead out of Wall Street and rallied while US markets declined. 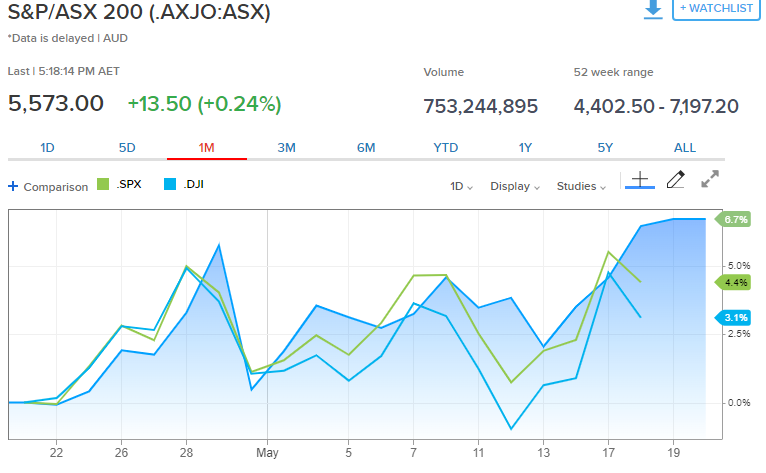 While there is little debate over the twin realities of an eventual end to the pandemic and the beginning of an economic recovery, the timing of both and what the world will look like in the aftermath are the subjects of endless speculation.

The belief that economies and life as we knew it will never return to what they were in January of 2020 is taking hold among many.

At the heart of the debate over where we are headed lies the consumer. Here is where we part company with the Americans, where two thirds of its economy relies on consumer spending. In Australia, household consumption makes up about 55% of our economy.

By the numbers, Australia appears to be in a better position to recover, given the dramatic differences in COVID-19 infections and deaths and our more measured approach to reopening the economy. The word of the day among many in government regarding an economic recovery was “snapback”, implying a relatively quick return to prior levels of economic activity.

Given the majority of our economy is consumer driven, the fact consumers here are among the most heavily in debt in the world, with some estimating debt is almost double income for many, should give pause.

The tide may be turning on the economic snapback belief, given the 18% drop in retail sales in May, following an 8.3% increase in the panic-buying early days of the pandemic. From the microbusiness.com.au website: 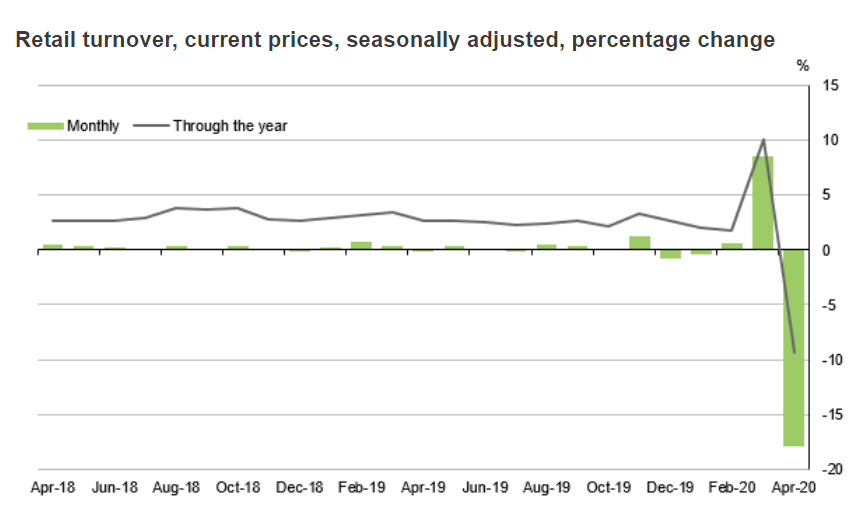 Investors who have been on the hunt for bargains already know many health and fitness stocks have outperformed during the pandemic. Of all the speculation about a return to normalcy versus a new normal, common sense suggests consumers will be more concerned about improving their health and fitness. For the many who believe you are what you eat, better quality food and healthier food preparation are vital to improving and maintaining health.

Couple declining or disappearing incomes with stay at home requirements and you have a predictable outcome – more cooking at home. For those with stable incomes, food delivery is another outcome. There are emerging indications cooking at home has shifted for many consumers from a burden to a rewarding and challenging endeavor that is likely to continue beyond the pandemic.

Cooking at home opens the doorway to healthier food and food preparation, benefiting, in theory, most of the Agriculture Sector.

In effect, the sector is an amalgamation of “niche” players, producing and providing a variety of foods from eggs to meat to cereals. There are few agriculture stocks that “do it all” but there is one making the news lately that comes close – Elders Limited (ELD).

Elders provides Australia’s rural farming community with virtually everything needed to be successful – from seeds, chemicals, and farm equipment, to livestock, real estate, and financial services.

The Elders share price hit a ten year high on 18 May following the announcement the company’s Half Year 2020 underlying net profit rose a startling 70%, attributed to better weather and the late 2019 acquisition of Australian Independent Rural Retailers (AIRR).

Investors have long cast a wary eye on many agriculture stocks due to fluctuating commodity prices and unpredictable weather. Yet over five years, Elders has rewarded its investors with an average annual rate of total shareholder return of +27.4%. Share price appreciation compares favorably to one of the top stocks on the ASX – CSL, with ELD now on an uptrend versus CSL. 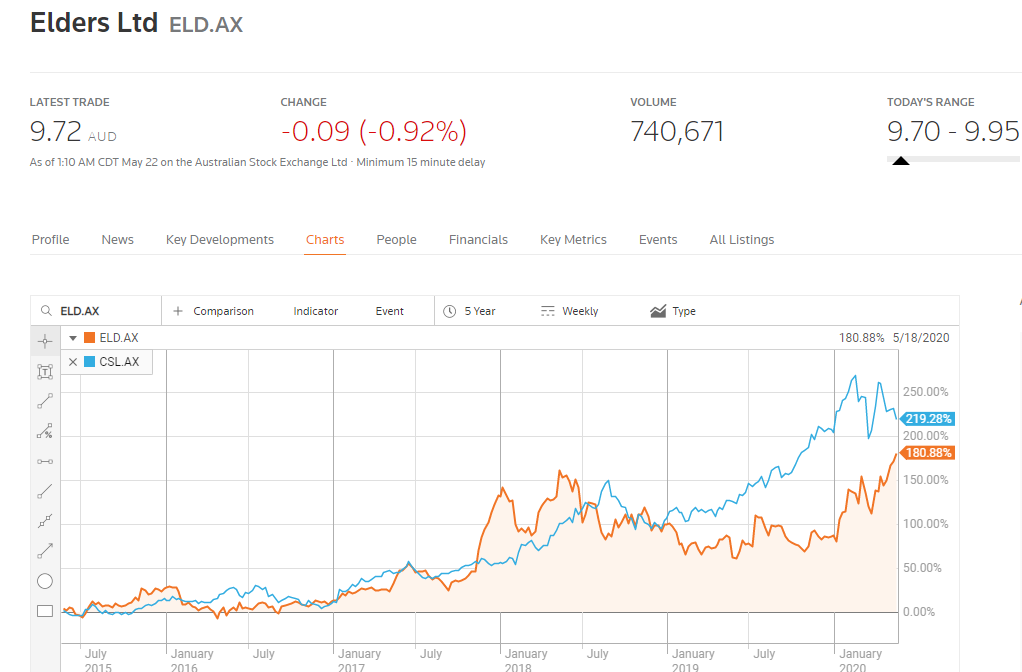 There are other small cap agriculture stocks worthy of interest in a post pandemic culinary environment.

Combining the move to cooking at home with the search for healthier foods should benefit the ASX stocks testing the waters of the move toward plant-based meats.

For consumers reluctant to venture into traditional restaurants or cook at home, the ASX has two players in the food delivery sector worthy of interest.

Growth estimates for an emerging food category – plant-based meats – call for annual growth of 14%, reaching USD$40.6 billion dollars by 2025. The three ASX stocks that may enter the growing plant-based meat market are:

Although Roots and JAT Energy provided indications of intent back in 2019, it was Wide Open Agriculture that energised investors with its 18 May announcement of an agreement with Curtin University to develop plant-based protein sources from Australian sweet lupin suitable for use in meat, dairy, beverages, and eggs.

The company listed on the ASX in July of 2018, opening at $0.21, and has taken its investors on a wild ride, reaching its apex following the 18 May announcement. Its share price outperforms the other two prospective entries into plant-based meats by a wide margin. 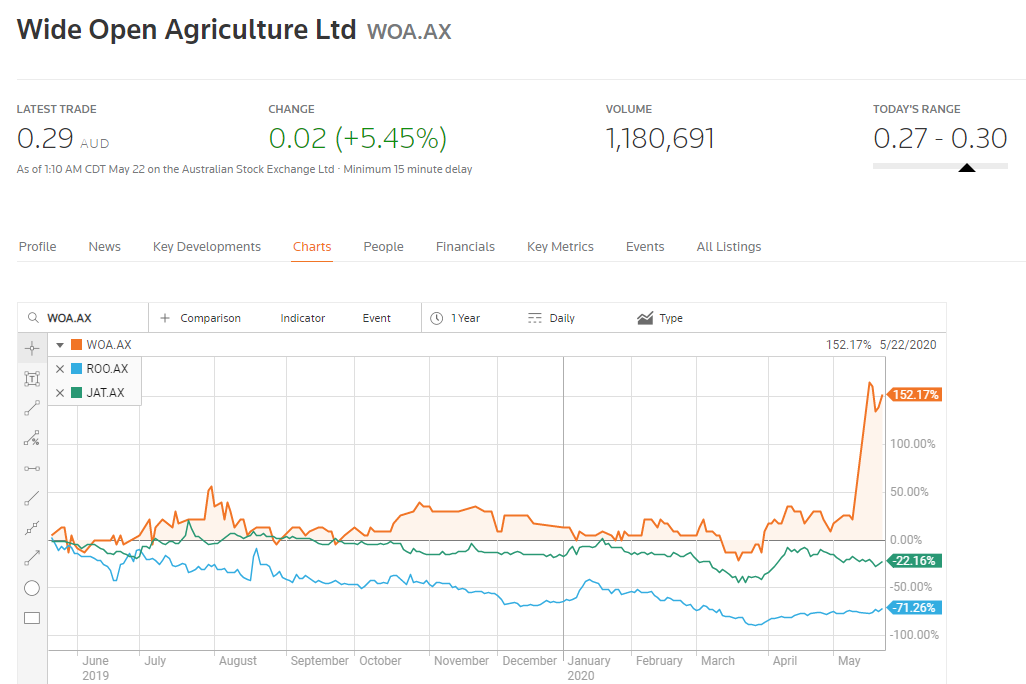 The company bills itself as a “regenerative food and farming company,” rebuilding soil and repairing waterways in Western Australia and now producing a variety of branded foods on sale here in Australia and exported to Southeast Asia. An innovative “protected cropping system” allows crop production without the risk of weather extremes.

Wide Open Agriculture’s Sales Update and Quarterly Report for Q3 of 2020 showed record setting revenues including its highest month ever in March in the middle of the pandemic.

Israeli-based Roots Sustainable Agricultural Technologies is developing innovative technologies for improving crop quality and yield, with one system for heating and cooling roots and another for irrigation via condensation, both in protected vertical growing environments.

On 24 October of 2019 the company made the financial news with the announcement of its discussions with a Holland-based consultancy group and a bio-based company to use Roots’ technology to produce organically grown meat replacement products indoors free of chemicals and pesticides common in other growing operations.

The company’s last update on its efforts came in a 17 December Media Release on the positive yield results from a POC (Proof of Concept Study) on the use of the Root Zone Temperature Optimisation (RZTO) technology that showed increases in weight and number of high-protein pea pods per plant, a result the company claims will be of interest to prospective plant-based meat producers.

JAT Energy is primarily an exporter of fast-moving consumer goods (FMCG) to China. The company has been on the ASX since 2008, involved in multiple industries with the latest venture being plant-based meat via a partnership with Oppenheimer, a Sydney based food processor. The original agreement was announced on 29 October of 2019, followed by a formal partnership arrangement signed in late November and the first China-based distributor signing on in early December. On 22 May JAT Energy announced its first shipment of a variety of plant-based meats to restaurants and chain food stores in Shanghai.

Investor response was less than overwhelming, with the stock price climbing 5.38%.

Demand for food delivery accelerated with stay at home restrictions, to the benefit of ASX food delivery company Marley Spoon (MMM.) Marley operates here in Australia as well as in Europe and the United States. Marley offers the best of both worlds to investors as it delivers meal “kits” complete with quality ingredients to be prepared at home by its subscription-based customers. The company listed on the ASX in July of 2018 and has grown revenue from $148 million in FY 2018 to $207 million in FY 2019, although remaining unprofitable.

Dragontail Systems is a high-tech developer of AI based “end to end” food management software spanning the entire restaurant delivery operation, from food preparation to quality control to packaging to status alerts to driver management and delivery. According to the company, it is the only AI restaurant management system in the world. In September of 2019, the company announced a collaboration with US-based Postmate, a food delivery provider. The stock price got a small boost on the announcement but has fallen back, despite the disruptive potential of the company’s business mode. In sharp contrast, the stock price of Marley Spoon went wild as the pandemic tightened its grip. 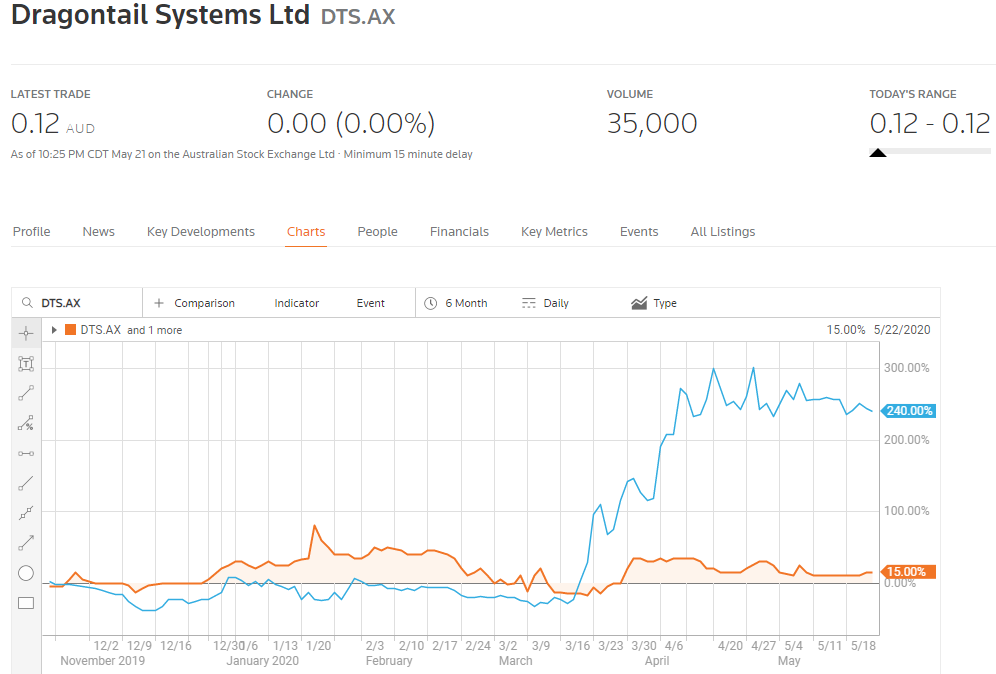 In a simpler world, “reality” would present a single face. …