Survey of payrolls & wages: The Bureau of Statistics (ABS) reported that between the week ending March 14, 2020 and the week ending May 2, 2020 employee jobs decreased by 7.3 per cent. Worst affected regions for job losses have been Mid North Coast and Coffs Harbour-Grafton, both in NSW.

Commonwealth Bank (CBA) credit and debit card lending: According to CBA, spending in the week to May 15 was down 2 per cent on a year ago.

Reserve Bank Board minutes: The Reserve Bank Board “remained committed to supporting jobs, incomes and businesses during this difficult period and to assisting Australia to be well placed for the expected recovery.”

• Australia has been a relative global outperformer when it comes to containing the virus and saving lives. Our disciplined approach to social distancing measures has been ‘rewarded’ with an easing of lockdown restrictions.

• We are gradually reclaiming our lives, but it’s too early to claim victory over COVID-19 as a restart of the economy may see virus clusters continue to emerge over the winter months.

• We’ll need to be vigilant, but the re-opening of some restaurants, pubs and shops is most welcomed. And the resumption of school and the footy season are morale boosters.

• Spending on credit and debit cards by CommBank customers continues to pick up. But the bank’s Household Spending Intentions survey suggests that consumers remain cautious due to virus uncertainty and elevated joblessness.

• Consumer confidence has improved for seven straight weeks. Remarkable. And there are two key reasons. The number of new COVID cases has been contained, allowing some re-opening of the economy. The second point is that all levels of government in Australia have provided good co-operative leadership.

• Any area to watch in the next few months is commercial property. Low utilisation and a low take up of space will keep downward pressure on valuations and yields. Landlords will need to be creative to lift occupancy and take-up rates.

• Have we reached bottom in terms of job losses? Much will depend on the success of the economy reboot. But there are early signs of workers re-joining their employers. That creates potential for higher incomes, spending and confidence. 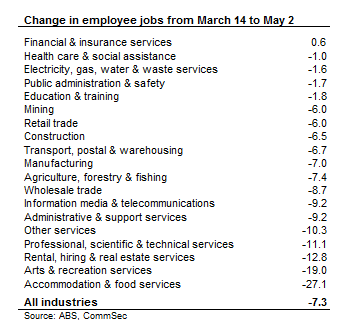 What do the reports and figures show?

• The weekly ANZ-Roy Morgan consumer confidence rating rose by 2.2 per cent to 92.3 points. Sentiment has lifted for seven successive weeks since hitting record lows (lowest since 1973) of 65.3 points on March 29.

• Four of the five major components of the index rose last week:

The estimate of family finances compared with a year ago was up from -18.6 points to -11.4 points;

The estimate of family finances over the next year was up from +16.8 points to +17 points;

Economic conditions over the next 5 years was up from +0.9 points to +2.4 points;

The measure of whether it was a good time to buy a major household item was up from -8.4 points to -5.1 points.

• The measure of inflation expectations fell from 3.5 per cent to 3.3 per cent.

• The Australian Bureau of Statistics (ABS) has released the third edition of a new survey: “Weekly Payroll Jobs and Wages in Australia”.

“Employee jobs decreased by 7.3 per cent; and

• By industry, employee jobs fell most from March 14 to May 2 in Accommodation & food services (down 27.1 per cent) from Arts & recreation services (down 19 per cent). In the Financial and insurance services sector, jobs lifted by 0.6 per cent.

• By region, the Mid North Coast has been most affected by job losses with payroll jobs falling 11.8 per cent from 14 March to 18 April. Next was Coffs Harbour – Grafton (-11.2 per cent) and Sunshine Coast Queensland (-10.2 per cent). But in Blacktown in NSW jobs fell just 4.4 per cent.

• CBA card data shows, “spending is down 2 per cent compared to a year ago. This is a similar result to last week but a big improvement on the spending trends that occurred in April. Spending is weakest in NSW, Victoria and the ACT. Relatively tight restrictions in Victoria is one factor impacting on spending trends in this state.”

• Spending on household furnishings and equipment once again remains the stand out in terms of the category showing the most positive trend. There is no letup in the DIY and other home maintenance projects going on. Spending in this category is 53 per cent higher than a year ago.

• According to the CBA, “The impact of the economic shutdown to control the spread of Covid‑19 continued to dominate the Household Spending Intentions readings in April 2020. Large declines were experienced in Home Buying, Travel and Entertainment spending intentions.”

Minutes of the Reserve Bank Board meeting held on May 5

• The minutes can be found here:

• Final paragraph: “In the various scenarios for the Australian economy considered by the Board, the labour market was expected to have ongoing spare capacity, and inflation was expected to be below 2 per cent over the following few years. Given this outlook, the Board would maintain its efforts to support the economy by keeping funding costs low and credit available to households and businesses. As the Bank’s policy package had been introduced only recently, members assessed that the best course of action was to maintain the current policy settings and monitor economic and financial outcomes closely. The Board remained committed to supporting jobs, incomes and businesses during this difficult period and to assisting Australia to be well placed for the expected recovery.”

• Policy package: “Members agreed that the Bank’s policy package was working broadly as expected. The package had helped to lower funding costs and stabilise financial conditions, and was supporting the economy.”

• Global: “Many countries were likely to experience their biggest peace-time economic contractions since the 1930s and labour markets were very weak. The outlook remained uncertain, although if infection rates continued to decline and restrictions were eased, a recovery could be expected to start later in 2020, supported by both the large fiscal packages and the monetary policy response.”

• Commercial property: “Members discussed vulnerabilities associated with commercial property, particularly for office and retail property. A large amount of new office space was expected to be completed in Sydney and Melbourne in 2020. Members noted that demand was not expected to keep pace with stronger supply in the near term and therefore it was likely that vacancy rates would rise and office rents would fall.”

Housing: “Around one-third of households with mortgages had prepayment buffers of three years or more. But a smaller share had no mortgage prepayment buffer and were more susceptible to financial stress.”

• The ANZ/Roy Morgan weekly survey of consumer confidence closely tracks the monthly Westpac/Melbourne Institute consumer sentiment index but the former measure is a timelier assessment of consumer attitudes and is now closely tracked by the Reserve Bank.

• The focus of the Commonwealth Bank (CBA) Household Spending Intentions Series (HSI) is on Australian households and their spending intentions. The approach is to employ the near real-time spending readings from CBA’s household transactions data, combine them with relevant search information from Google Trends data and map the results to the official data on consumer spending.

• The Reserve Bank releases minutes of its monthly Board meeting a fortnight after the event. The minutes give a guide to Reserve Bank thinking on interest rate settings.

• It is a day-to-day proposition. But there are reasons for hope that Australia can experience a ‘V-shaped’ economic recovery. It will be important that too many ‘normal’ parts of our lives are re-started too quickly.

• Continued progress on health and economic grounds will support the outlook for corporate profits and therefore support the recovery on the sharemarket.

• Governments need to direct energies at supporting industries and regions that have been more adversely impacted by shutdowns.

• Hardware retailers should continue to out-perform. CBA noted: “There is no letup in the DIY and other home maintenance projects going on.”