Winners from the 2021 Diggers and Dealers Mining Forum

Since 1992, the unofficial gold mining capital of Australia – Kalgoorlie – has hosted an annual get together for the movers and shakers in the sector that moves the Australian economy – mining. The conference — the Diggers and Dealers Mining Forum — attracts a host of successful and promising “diggers” along with the “dealers” providing financing, services and supplies, brokers and analysts, bankers, investors, and a conference hall full of exhibits.

Kalgoorlie was founded as a gold mining mecca in 1893, but the first Diggers and Dealers Forum was held in Perth in 1983 before moving to Kalgoorlie in 1992. Today it remains arguably the premier mining conference in a mining country.

The mood at this year’s event is decidedly upbeat as it is hard to find any commodity that did not have a banner year over the last twelve months. All-time highs have been common for iron ore, nickel, copper, aluminum, lithium miners, and miners of other commodities.

The forum is more than a showcase for prominent and up and coming miners to present their performance and/or potential. The keynote speaker presents an analysis of global economic conditions, their impact on the industry, and key trends affecting the industry.

Over the course of the three days more than fifty miners make presentations in five separate sessions, with each session chaired by a member of the analyst community. At the conclusion three companies are recognized for their achievements – Digger of the Year; Dealer of the Year; and Best Emerging Company.

For the 2021 Diggers and Dealers Mining Forum the winners were:

In March of 2020, West African Resources (WAF) opened the Sanbrado Gold Mine in Burkina Faso in West Africa at the start of the coronavirus pandemic. The company’s production since opening earned it the Digger of the Year Award.

A promising feasibility study released on 16 April of 2019 did not ignite much investor enthusiasm but with construction complete, the first ore processed, and shipments commencing in Q2 of 2020, the share price took off. 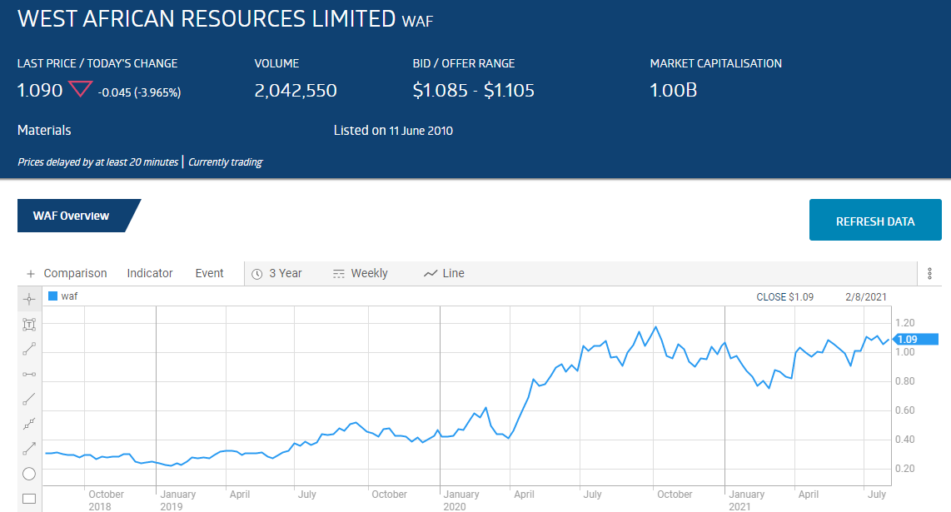 Aussie investors have long had a love affair with miners on the move, so it should not be surprising that the share price of the producing and profitable West African Resources now lags far behind specialist explorer, Chalice Mining, the winner of the Best Emerging Company award.

At approximately the same time West African was opening gold production at its Sanbrado site, Chalice Mining announced a massive discovery of nickel/copper at the company’s Julimar Nickel-Copper-PGE (Palladium Group Elements) Project, earning the Julimar Region in Western Australia the accolade of one the “hottest exploration sites” in the world.

Chalice went into a trading halt prior to the Julimar announcement, immediately following another positive development at its Pyramid Hill Gold exploration project in Victoria. The share price took off on the Julimar news. 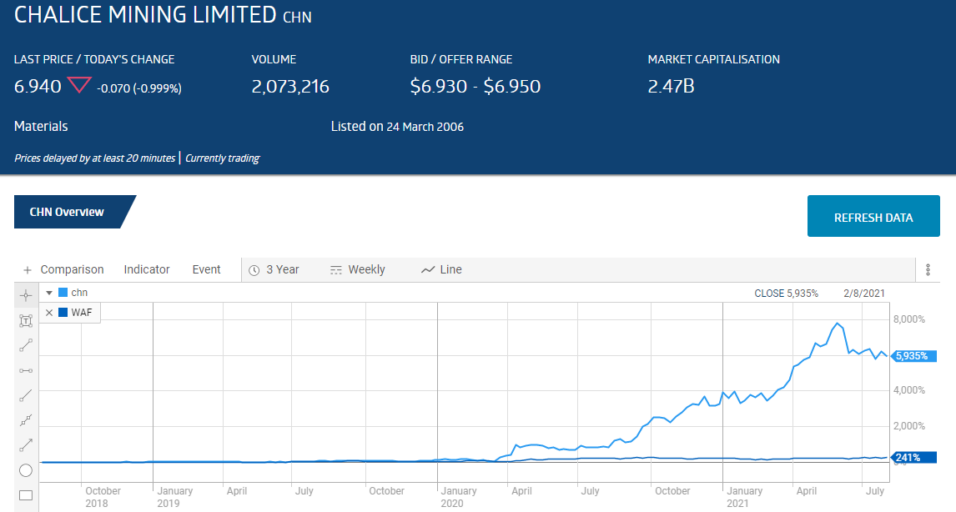 Chalice Mining’s business model is unique among large cap mining companies, focusing on exploration and development rather than production. The company targets only highly prospective projects located in Tier 1 mining districts in significant geological areas with a record of successful discoveries.

Chalice generates revenue from sales of developed mines, as in its sale of Canadian assets, financing activities, royalties, and joint ventures as silent partner.

In 2018 the company made the decision to expand its portfolio beyond gold projects to include base and battery metals opportunities. The company’s exploration portfolio is substantial, led by the Julimar Project and the soon to be spun off in an IPO Pyramid Hill Gold Project. Currently the Chalice portfolio includes:

Decarbonisation of the mining industry has been a prominent theme at the 2021 Diggers and Dealers Forum so the presentation from Chalice Mining made the most of the significance of developments at the Julimar Project, anointing it a “green metals” project due to the significance of palladium, nickel, copper, and platinum to combat climate change.

Chalice has demonstrated its capability to bring Tier 1 gold projects to fruition, with investors betting the company will do the same with “green metals.”

The common element shared by Chalice and West African Resources was a series of positive project announcements, each bettering the last. West African announced production for the June Quarter of 2021 at Sanbrado of 63,610oz at an All in Sustaining Cost (AISC) of US$928 per ounce.

At its Diggers and Dealers presentation, the company labelled itself “West Africa’s newest gold producer.” The company owns 90% of the Sanbrado mine with the remaining 10% owned by the Burkina Faso Government. The Sanbrado has both an open pit mine (M5) and an underground mine (M1 South).

In April of 2020 the company acquired the Toega Gold Deposit, with a feasibility study underway with completion scheduled for Q4 of 2021. Financial Results for FY 2020 showed maiden revenues of $341 million dollars and a profit of $89 million.

IGO had changed its name from Independence Group in early 2020 and has now “dealt” its way out of the diversified mining sector into a solely focused miner of battery minerals.

The transformation began in 2015 when the company acquired Sirius Resources and its Nickel/Copper/Cobalt asset in Western Australia. Production began in 2017 while the company began offloading other assets, like the Stockman Copper Project and the Long nickel operation. In early 2021 the company offloaded its Tropicana Gold Project, using the proceeds for the crown jewel that arguably led to their winning the Dealer of the Year Award – the Tianqi Lithium Operation, which included the Greenbrushes Lithium Mine and Kwinana Lithium Refinery.

The deal is a joint venture between IGO and Tiqani Lithium, with IGO assuming 49% ownership. Together the JV holds a 51% interest in Greenbrushes and 100% in the Kwinana Refinery.

In its presentation at the Diggers and Dealers Forum, IGO made a strong case for its change in strategic direction with the following pictograph, from the presentation. 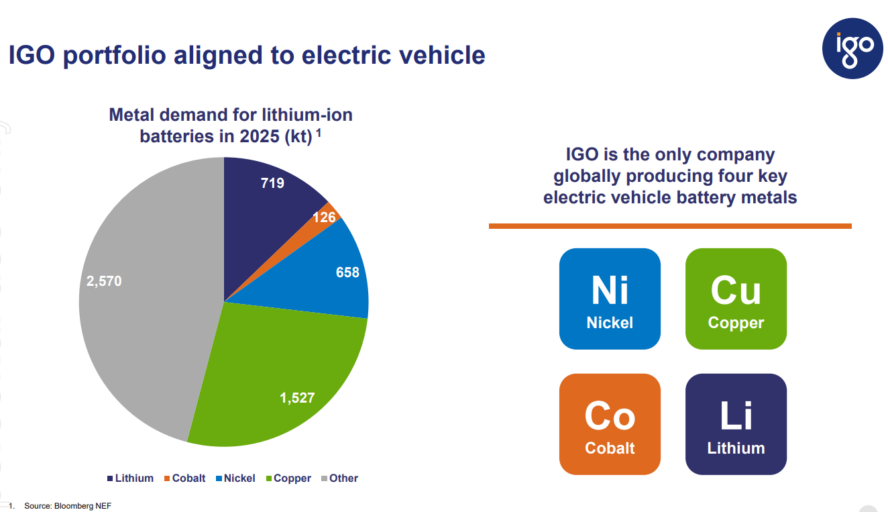 In July IGO acquired full ownership of the Silver Knight nickel/copper/cobalt sulphide mine from Creasy Group.

The company’s quarterly report for Q4 of 2021 showed a 44% quarter over quarter increase in revenues and a 981% increase in NPAT (net profit after tax), reflecting the sale of the Tropicana Gold asset.

Perhaps of greater interest to investors was the outstanding production performance, with production for all metals – nickel, copper, and cobalt – exceeding guidance.

The Tiqani transaction finalised on 30 June of 2021, with IGO noting in its presentation that since the initial JV agreement was reached, the price of lithium sourced spodumene was up 90% and lithium hydroxide was up 50%.

IGO has 7 exploration assets in Australia with one in Greenland. All are prospective for battery minerals. The following pictograph from the IGO website lists all the company’s holdings, along with percentage of ownership, the status of each, and the minerals present. 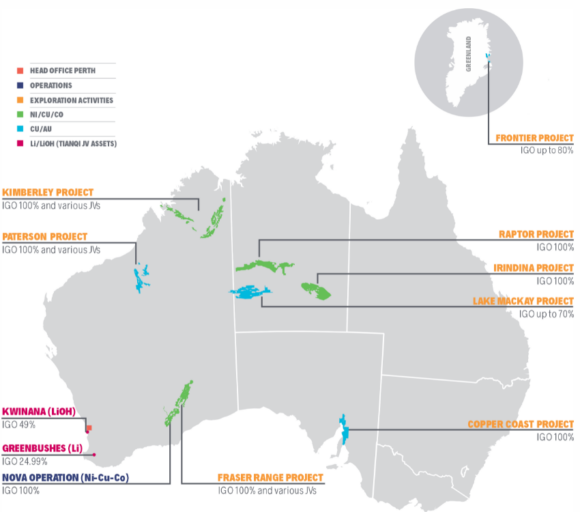 The following table summarises price movements, earnings growth, and shareholder return for the three winners. IGO is the only company with a double digit (10.4%) earnings growth forecast, while West African Resources has a P/E ratio (price to earnings) of 10.65, well below the average P/E for the materials sector of 15.63 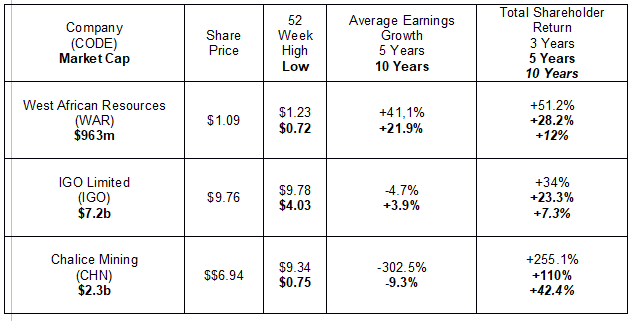 Winners from the 2021 Diggers and Dealers Mining Forum

Since 1992, the unofficial gold mining capital of Australia – …