The Competitive Landscape in the BNPL Sector

A 14 May article appearing on businessinsider.com.au seems visionary in light of this week’s relevant news on the BNPL Sector. The title was:

The article quotes the Humm CEO as saying “We are going to start to see – especially if these market conditions remain – the pointy end of this BNPL run.” This comes from the head of the only BNPL company on the ASX to reach profitability. Two months later on 14 July the largest corporation on the planet by market cap announced it was getting into the Buy Now Pay Later (BNPL) space. Apple.

Although Australian fintech companies are often given credit for creating the BNPL business, the truth is the digital world has opened the doors for software engineers to create web and app based platforms that add value to an age old buying strategy – installment plans.

A US company called Cowperthwaite and Sons is credited with creating the first installment plan for the furniture it sold in 1807. In 1850 the Singer Sewing Machine Company introduced installment plan buying for its sewing machines.

The basics have not changed. Consumers walk out the door with their goods and pay for them in timed installments instead of at the time of purchase.

What changed over time and is still changing with the massive number of companies now competing in the space are the credit standards, purchase limits, and number of installment payments, among other digital “bells and whistles.”

The US trails Australia in the adoption of BNPL arrangements by a wide margin and it is cracking the US market that is driving the growth plans of many of the top players on the ASX. Led by market darling and industry favoring Afterpay Group (APT), share price appreciation reached lofty levels, raising concerns among many analysts and market experts over valuations of companies yet to produce a profit.

The “bubble” word began to appear in the financial press in 2020, with some cautioning the BNPL bubble was approaching the level of the tech bubble in the early 2000’s.

Most investors ignored the concerns and the sector remained hot with multiple new companies getting into the BNPL sector, popping up on share markets here and in the US and elsewhere. The “excessive valuation” argument appears when investors bid up the price of a company based on the promise of growth the company has yet to deliver.

Analysts looked at the business models, noting multiple threats, including loan defaults, regulatory oversight, low margins, and increasing competition. The stock price performance in the two years since those bubble articles began appearing shows investors initially ignored the risk warnings as four of the five top players on the ASX by market cap did not see “air begin to escape” from the bubble until early 2021.

Afterpay, Zip Co (Z1P), and Sezzle Inc. (SZL), have all seen deep drops, with Humm Group (HUM) spared much of the pain. 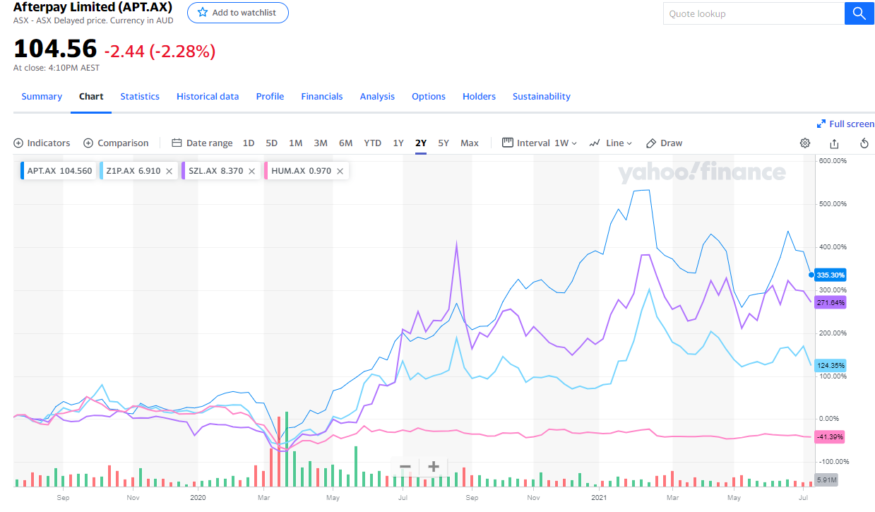 It seems nervous investors are hitting the sell button at anything negative and even some positive signs, from capital raises to disappointing growth results to acquisitions. But none compared to the devastating impact of the news of a well-known company getting into the market.

The latest is the hint of the Apple entry, a move reportedly intended to boost adoption of the company’s Apple Pay mobile app. Apple is one of the recognisable brands in the world, with legions of “fanboys” everywhere, eager to adopt any new entry in the vaunted Apple ecosystem.

A commonly accepted reason to ignore the warnings of competition in the sector was the belief the addressable market was large enough to sustain multiple players. The potential market is indeed huge. A 2021 Global Payments report from the Worldpay division of FIS, a financial technology research and consulting firm, forecasts the BNPL market to increase 181% by 2024. BNPL transactions increased 78% in 2020.

In the early days there was a good bit of hype about BNPL providers sounding the death knell of credit cards. However, financial institutions involved in consumer retail quickly caught on to the need to compete with the early BNPL movers, of which Afterpay was one, offering their own point of sale (POS) flexible payment plans.

Yet Apple is only the latest in a continuing stream of heavy hitters jumping into the market. All have a competitive advantage, not only in name recognition, but also in established connections to existing businesses.

At the core of all these platforms lies a consumer in purchase mode. Most are available regardless of the point of sale (POS) – at a retail outlet, online, or via a mobile app.

There are differences serious investors need to consider. Concerns about upcoming regulatory risk of a sector that is in essence lending money but not regulated like traditional lenders are real. Credit approval from some providers is more rigorous, for risk averse investors. The number of installments varies, with Mastercard providing the consumer the option to choose their own, up to 12 months. Amazon is looking to differentiate itself from the competition with its 5 payment option. PayPal is taking aim at a primary source of revenue for Afterpay – late fees. PayPal in 4 will not charge late fees. Some have upper limits of the dollar amount of a purchase.

How BNPL earn revenue also varies, although analysts appear uniformly of the view margins are small and may not be able to sustain long term growth.

Risk averse investors have one choice among the top ten ASX BNPL players that is making a profit – Humm Group – and one nearing profitability Afterpay Group.

Afterpay provides a lesson for investors considering some of the ASX BNPL companies in the early stages of entering the sector. Afterpay has posted increasing revenues in excess of $100,000 in each of the last three years, capping at $450 million in FY 2020, with the pandemic propelling revenues to more than double from FY 2019. Yet potential profits are devoured by the capital expense associated with first entering a market, and then expanding into other markets.

In contrast with PayPal, Amazon, Apple, and Commonwealth Bank, BNPL providers like Afterpay that rely on retailers must absorb the cost of integrating with each retail outlets existing systems. PayPal, Amazon, Apple, all have millions of customers on which to build. PayPal Credit has been a dominant payment system adopted by many online retailers for decades, allowing customers to defer interest on large dollar purchases for six months or longer, without a set number of installments. If the balance is not paid by the allotted time, the customer is charged the interest. PayPal customers now have the option of Paypal in 4.

The outcome is far from determined as ASX companies like Sezzle, Splitit (SPT), and Zip Co have a global presence along with Afterpay, as seen in this pictogram from UK fintech consulting firm Penser showing UK and European providers. 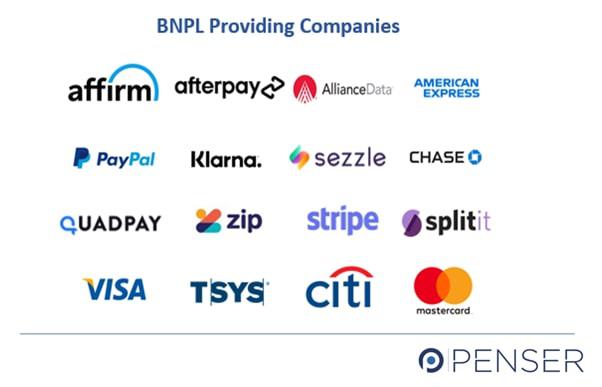 The ferocious race for market share is on, with competitors like Afterpay and Zip spending like wild dogs to add retailers and users. Afterpay appears nearing the finish line of profitability, at least in the short term.

In FY 2020 the company reported a loss of 5.2 cents in earnings per share, which is expected to drop further in FY 2021 to 5.6 cents per share in the red. But in FY 2020 the long awaited day may arrive, with analysts forecasting positive EPS of 40.3 cents.

The company has repeatedly reported blockbuster numbers in sales and user growth. As most players in the space are doing, Afterpay is looking to differentiate itself from the competition. The latest enhancement in its US business is the addition of access to major US retailers including CVS and Walgreens pharmacies, Target, and Amazon. Users will access the service via the Afterpay app exclusively. Details remain sketchy, as the media release referred to “select customers” who can use the service by checking their favorite brands on the app and then purchasing from the retailer using a “one-time card.”

Despite the competition, Afterpay remains the “hare” in the race, but watch out for the “tortoise” – Humm Group.

The company went through a “rebranding,” changing its name from Flexigroup, and its business model in response to the changing competitive landscape, slimming down from 23 loan platforms to just 4.

The strategy was to build an ecosystem of financial products to meet not only the needs of shoppers and retailers, but small and medium sized businesses as well.

Humm group makes the bold claim it has built platforms for buying or leasing everything.

The company’s first consumer oriented BNPL platform – Humm – has unique features that could separate it from the competition. The purchase price ranges from $1 dollar to $30,000 dollars for major purchases with repayment installments from ten months to sixty months. This opens the doors to major buys for the consumer.

HUMM is available through more than 56,000 retailers and the company established a strategic partnership with BPAY for expenses like utility bills and school fees. HUMM launched in the UK on 30 June of 2021.

HUMM Pro offers businesses flexible repayment options for up to $30,000.

BUNDL is for purchases up to $1,000 with up to 14 days to repay anywhere Mastercard (a strategic partner with HUMM) is accepted. This platform offers budgeting tools, a differentiating factor with Afterpay and others.

HUMM 90 is a credit platform similar to PayPal Credit, with the difference it has no purchase limits and offers 110 days interest free.

The company’s Half Year 2021 Financial Results continued its profitable trend, reporting a 25.8% increase in NPAT.

On 3 June, the company announced the launch of Humm/Tapp. With a digital card for tapping a digital wallet, consumers can make a purchase at any Humm merchant, bypassing the instore sales system.

On 14 July Humm Group announced an arrangement with Westpac NZ to introduce the BUNDL platform in that country.

Humm will be entering the Canadian market later this year.

The Competitive Landscape in the BNPL Sector

A 14 May article appearing on businessinsider.com.au seems visionary in …