Taking a Chance on Upcoming IPOs

The optimism over a possible quick economic turnaround, the v-shaped recovery, took another turn for the worse on the morning of 30 July in the US. Although that country’s annualised GDP after the close of the second quarter came in better than expected at a drop of 32.9% versus a forecasted 34.7%, that number along with the quarterly decline of 9.5% were the worst figures in recorded history. 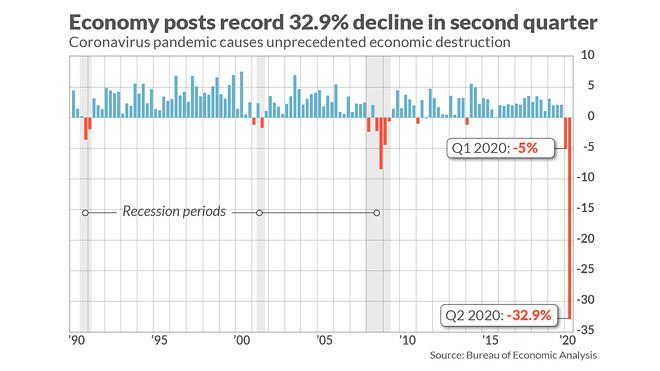 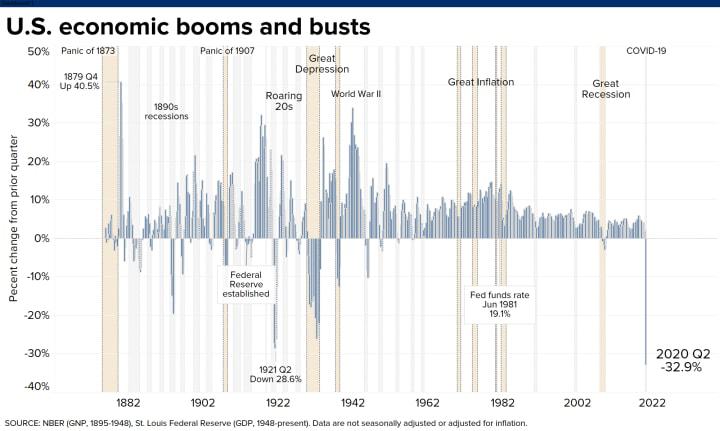 More economic news casting doubt on the speed and breadth of the recovery was the continued dismal numbers of Americans filing for unemployment – another 1.4 million for the week. Given the dependence of the US economy on consumer spending, persistent unemployment and the recent fall in consumer confidence added to the gloomy outlook. 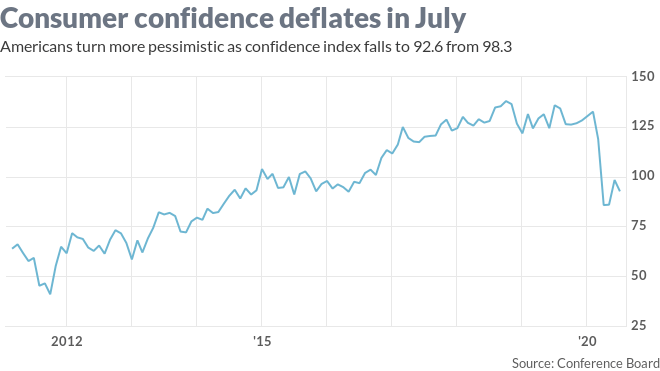 Here in Australia the rising tide of coronavirus cases is driving some ASX sectors lower. The unemployment rate here hit 7.4% in June, the highest level in the past 22 years.

In the midst of all this, stock markets crashed and rebounded with some investors reaping rewards while others went to cash or remained on the sidelines.

The US GDP collapse impacted markets here in Australia.

Opportunities remain in both companies within sectors benefiting from the pandemic – biotechs, select miners, and technology – and some withstanding the economic downturn spurred by COVID 19.

While current conditions have caused some companies to press the pause button on plans for Initial Public Offerings (IPOs), the performance of some recent entries on the ASX suggest there is opportunity here as well.

Of the Top Ten IPOs of 2019, five have positive share price appreciation year to date, led by a company in the red hot BNPL (buy now pay later) sector Splitit Payments (SPT), up 106%.

Biopharma company working on repurposing a drug for neurological conditions Invex Therapeutics (IXC) is up 2%.

Investors with experience researching IPO share price performance know that many jump out the gate on fire, only to go ice cold in a matter of months. One might expect early 2020 entries on the ASX were crushed in the market collapse beginning in late February. Yet five stocks debuting in January and February remain in positive territory and one listing on the ASX not through an IPO but via a reverse merger is up triple digits.

The best performer to date is a startup gold miner, Tesoro Resources (TSO) listing in February this year following the reverse merger had a first day close of $0.03. The share price is now $0.14, up 366%. The company’s share price performance is testimony to the rabid appetite of investors for gold miners with promise and no performance as yet.

Tesoro was founded in 2017 and currently has a 51% interest in a highly prospective gold mining asset in Chile, the El Zorro Project, with the rights to acquire 80%. The company has the rights to acquire 100% of the Espina project. Both are in an existing producing gold region, with infrastructure in place backed by a government friendly to mining interests. Tesoro has dramatically outperformed existing ASX major players in the gold mining sector, Northern Star Resources (NST) and Evolution Mining (EVN).

An information technology stocks in the SaaS (software as a service) sector – Cosol Limited (COS) — has also performed well along with two more gold miners in the exploration stage – Castile Resources (CST) and Kaiser Reef (KAU).

Cosol, founded in 2019, offers a variety of digital business solutions to companies in the mining and minerals processing, healthcare, energy and utilities, defense, public infrastructure and transport, oil and gas, and petrochemical industries sectors.

Kaiser Resources is exploring a gold project within the Lachlan Fold Belt in New South Wales, with 100% interest.

Manuka Resources (MKR) listed on the ASX on 14 July, eclipsing its IPO price of $0.20 per share with an intraday high of $0.285. With a market cap of $46 million dollars, the share price is now at $0.63 per share, more evidence of investor enthusiasm for early stage gold miners. Manuka owns both a silver and a gold mine in NSW and has begun producing gold.

There are five upcoming IPOs and two listing in the last week of July with business models in sectors less likely to experience long term negative impact from the pandemic, ranging from healthcare, to mining, to technology, to healthy foods.

Aroa Biosurgery (ARX) is a New Zealand based regenerative medicine company targeting the US market through partnership arrangements with US companies. The company listed on the ASX on 23 July, currently trading at $1.49.5, up from its first day close of $1.42. The company has a market cap of $444 million.

Aroa Biosurgery has an impressive list of approved products currently on the market in the US for soft tissue regeneration in a variety of wounds. The company’s products are summarised in the following table from the Aroa IPO Prospectus: 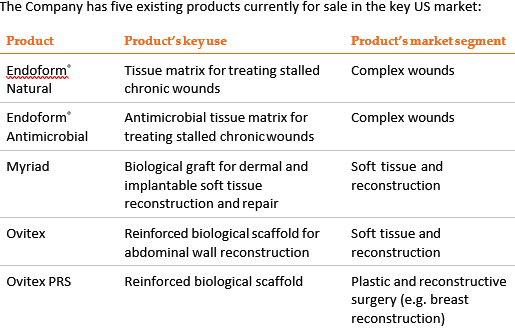 Aroa has 10 patents in place with an additional 25 pending to support expansion of its product portfolio. The company has grown revenue in each of the last three Fiscal Years, but operating expenses in the US market have eaten into its gross profit growth, leading to profit losses. Shutdowns around the world of elective surgical procedures cut into Aroa’s revenue and the risk section of the IPO points to continued revenue loss should shutdowns of elective procedures return.

On 29 July, the company announced its Aroa’s Myriad™ product had received approval for commercial use in the EU and US FDA (Food and Drug Administration) clearance for a new product Symphony™.

4DMedical (4DX) is scheduled to debut on the ASX on 14 August. The company is Australia based with a patented technology for creating non-invasive four-dimensional imaging for respiratory diseases. The technology, known as XV Technology, was acquired from Monash University where it originated in 2005.

4DMedical currently features both software and hardware solutions. Operating on a cloud-based SaaS model allows imaging generated from third party or 4DMedical hardware to create the 4D imaging via the company’s software platform.

In May of 2020, the company received US FDA clearance for the sale of XV Technology products in the US. 4DMedical is generating some revenue but as is typical of many startups, operating expenses for bringing products to market swallow every dollar of revenue and more, leading to what often is a long wait for the company to reach profitability.

In the new normal of a post-pandemic world market experts and commentators are predicting rising demand for anything and everything that will promote better health, with healthier foods arguably at the top of the list.

Forbidden Foods (FFF) is expected to close its IPO offer on 26 August. The company began in 2010, with the entrepreneurial founders relying on high credit limit personal credit cards for funding in the face of reluctance of many banks to fund startups in highly competitive industries. In 2012, the company introduced its principal offering — a non-GMO black rice product, acknowledged as a “superfood”, far superior to white or even brown rice.

The first bag of black rice was soon joined by red rice and green rice with the company now offering a variety of health food products under three registered brand names — Forbidden®; FUNCH®; and Sensory Mill®.

The company’s Sensory Mill® Apple Flour won the 2020 Food and Beverage Industry Award for Product of the Year. The FUNCH® product line includes a variety of seed and fruit-based snacks, adding a line of healthy baby foods.

Forbidden Foods now counts more than 3000 retailers and 500 restaurants as its customers, supplemented by the company’s online sales. Currently operating in Australia, New Zealand, Ireland, Singapore, and the US, the company generated revenue of $3.4 million in 2019, with expectations to top $4.1 million in 2020. Ninety percent of its revenue comes from the Australian market.

The company has expanded its reach beyond the traditional resources industry into an array of scientific sectors with the 2019 release of it Dug McCloud platform. DUG is global in scope with office in Perth, London, Houston, and Kuala Lumpur.

The company has won multiple awards as a designer, builder, and operator of High-Performance Computers, including the Cecil Green Enterprise Award from the Society of Exploration Geophysicists and the Enterprise Data Centre Design Award from Data Centre Dynamics.

Dynamic Drill and Blast offers on-site services from large scale blasting to “vibration-sensitive and close-proximity civil construction work.” The company has a diversified footprint in major commodity sectors, from iron ore and gold to lithium.

Taking a Chance on Upcoming IPOs

The optimism over a possible quick economic turnaround, the v-shaped …