Long term investors are often on the lookout for stocks that stand to benefit from emerging global trends. Few would deny that given the burgeoning demand for more and better food, agriculture qualifies as a megatrend.

The world’s population is growing and the rapid expansion of the middle classes around the world are propelling the demand for higher quality foods in greater quantity.

In addition, the reduction in land suitable for large scale agricultural use is leading to the need for innovative production methods to increase crop yields.

From the Australian Bureau of Agricultural and Resource Economics and Sciences (ABARES) website, the following graph shows the record setting gross value of production for livestock and crops expected in the coming year.

About 70% of Aussie agricultural products are exported. For the trading year 2020 ASX agriculture stocks were up more than 50% year over year. In 2017 the National Farmers Federation (NFF) set an ambitious goal of achieving $100 billion dollars in agricultural production. Although there are skeptics who believe $84 billion is more likely without some changes to the system.

There are around thirty five agriculture related stocks on the ASX, yet despite the anticipated tailwinds, only dairy supplier a2 Milk Company (A2M) once achieved market darling status. This came not because of its reportedly superior milk product, but because of its healthier, safer infant formula offerings serving an exploding market in China.

The a2 Milk Company may help to explain why Aussie investors on the whole are reluctant to invest in some traditional agricultural producers. In short, “one trick ponies” can collapse on any sign of trouble with the pony. With weather related problems plaguing agricultural producers in the last few years, it is little wonder investors have largely shunned pure play producers like Australian Agricultural Company (AAC) – cattle – and Inghams Foods (ING) – poultry – and Farm Pride Foods (FRM) – eggs. 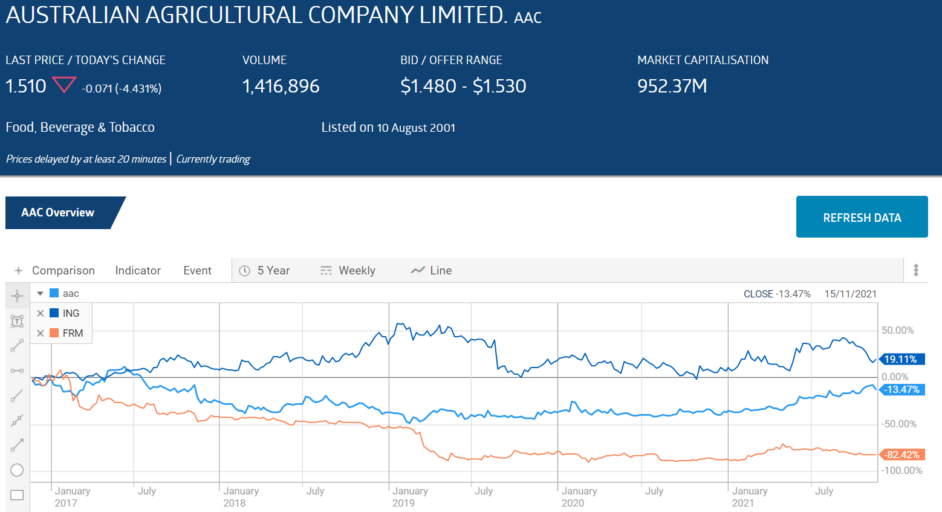 What some investors forgot about A2M was its success was dependent largely on a single product category.

There are ASX agricultural stocks that are more diversified, including producers of multiple product categories; service providers of companies across the agricultural spectrum; and providers of pesticides, herbicides, and fertilizers needed by companies producing different crops.

This week two companies offering crop protection products and fertilizers made the news. Incitec Pivot (IPL) was out with a stellar 2021 Full Year Financial Results Report showing a 10% revenue increase and a 90% rise in net profit after tax (NPAT), driven by higher prices for the company’s fertiliser operations. The company also makes industrial explosives and industrial chemicals. Incitec has a market cap of $6.2 billion dollars and closed the final day of the trading week at $3.23

Nufarm Limited (NUF) posted a 10% revenue increase for FY 2021 and reversed a FY 2020 loss of $91 million to post an underlying net profit after tax of $65 million dollars. Nufarm makes pesticides, herbicides, and fungicides for crop protection. Nufarm has a market cap of $1.8 billion, closing the week at $4.81.

Investors may have been unhappy with the lack of a 2022 outlook from Nufarm management as the stock price declined on the news while Incitec’s stock price rose. 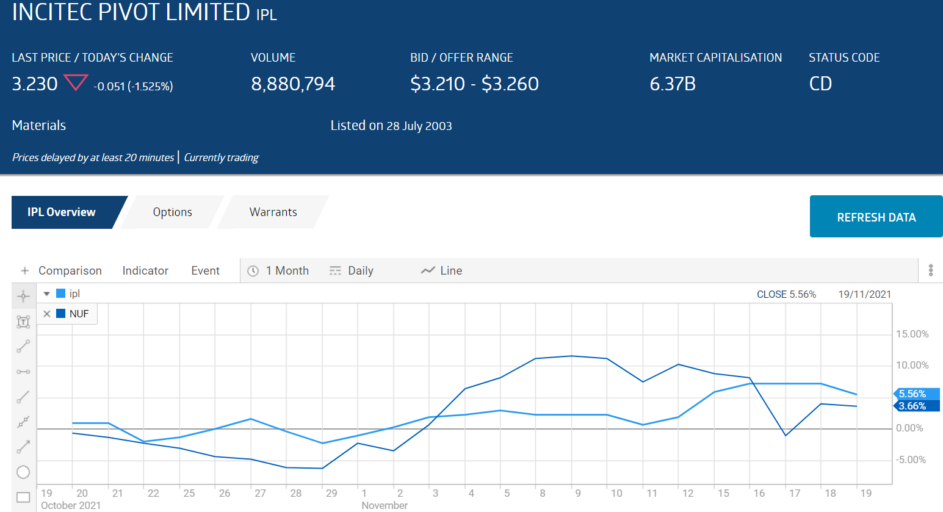 Elders provides a variety of services to rural and other agricultural producers, from real estate sales and management to insurance and home loans to financial and banking services to assistance in trading wool, livestock, and grain.

The company has grown both revenue and profit in each of the last three fiscal years, with revenues increasing 21.9% and profit up 16% between FY 2020 and FY 2021. Elders has a market cap of $1.8 billion, closing the week at $11.79. Over the last five years, the company has average dividend growth of 20%.

Ridley makes high performance nutritional products for virtually every animal species available through an ASX listed company – beef, pigs, sheep, poultry, as well as for a variety of species of fish. In addition, the company produces products for horses, dogs, and other pets.

Rural Funds Group is a real estate investment trust that owns and leases agricultural properties across Australia to a diversified group of producers. Rural Funds Group tenants include producers from six ASX agricultural sectors – cattle, vineyards, poultry, cotton, macadamias, and almonds. The company has a market cap of $16 million, closing the week at $0.29.

There are multiple single or near single agricultural commodity stocks on the ASX, including salmon, tuna, and other fish species providers, fruits and vegetable growers, and grain producers.

Another option for investors with high risk tolerance is the few stocks comprising the ASX Agtech, or Agri-tech sector. The existence of these stocks may surprise some investors savoring disruptive technologies in other sectors, most notably financial technology, or fintech.

Both the NFF and ABARES point to innovation as a key requirement to achieve the 2030 production goal.

ASX Agri-tech stocks have been long on potential and short on promise. Over the last five years two once promising stocks – CropLogic and Abundant Produce – have faded into history. Australia lags behind the rest of the world in investments in Agri-Tech, attracting $29 million dollars invested in the sector in 2018 versus $16.9 billion dollars invested globally.

There are however, over fifty Agri-Tech unlisted startups around the country, with one of the ASX listed companies announcing a major breakthrough on 24 October.

Agtech development company Bio-Gene Technology (BGT) has been working on a new technology platform for the development of insecticides from naturally occurring plant compounds. The two products in development are Qcide and Flavocide.

Startups like Bio-Gene face both the challenges of successful product development and enlisting interested partners to help fund and market the product.

On 24 October, the company announced a development and licensing agreement with the top garden care organisation in Europe and Australasia — Evergreen Garden Care.

Evergreen’s product portfolio features many of the world’s leading brands, including Scott’s and Miracle-Gro, but lack substantial exposure to insecticides. The agreement will allow Evergreen to expand its focus on herbicides and fertilisers to include insecticides for mosquito and ant control.

Evergreen will pay licence and milestone payments during product development and royalties on sales of new products including Bio-Gene technology. Evergreen also has the option to licence the development of other applications for the consumer market.

The details of the agreement matter far less than the expression of confidence in the viability of Bio-Gene’s work.

Two days later Bio-Gene added another milestone announcement. As 2019 drew to a close, the company entered into an agreement with Clarke Mosquito Control to field test Flavocide and Qcide technology on three different mosquito species.

Following successful trial results, Bio-Gene and Clarke announced an agreement to explore next steps to commercialise Bio-Gene technology for mosquito control in the public health market in the US.

Bio-Gene listed on the ASX in late 2017, with another Agri-Tech listing following in 2018, outperforming BGT to date – Wide Open Agriculture. Here is how the share price of each has performed since listing. From the ASX website: 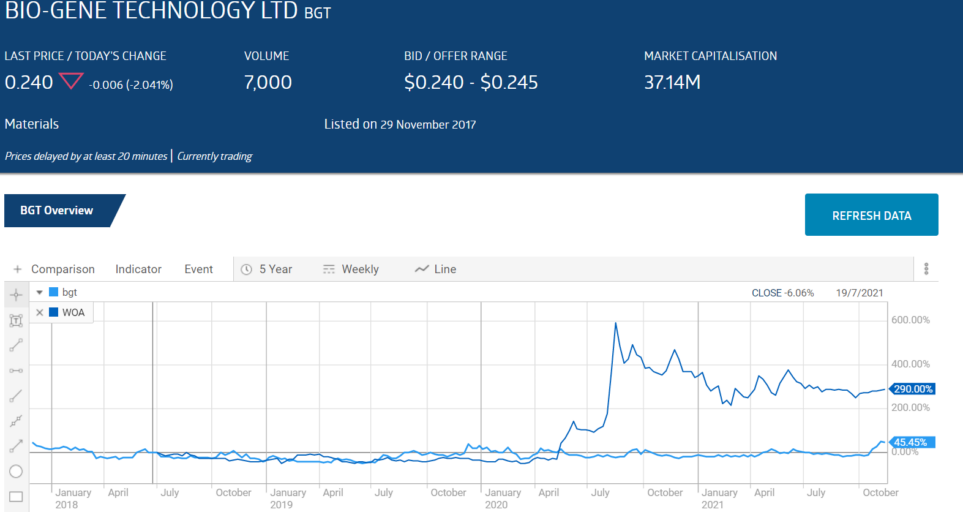 Wide Open Agriculture is a regenerative agricultural producer, taking a page from the farming practices in the pre-industrial age. When the company listed on the ASX in 2018, regenerative agriculture had entered the lexicon of wholistic, natural, and organic farming and foods, and was hailed by some (think Amazon) as the next largest food trend in the US and the world.

When arable land was plentiful, industrialised farming that depleted the soil of nutrients through repeated single crop planting could be managed by simply moving to other lands.

Regenerative agriculture practiced by Wide Open Agriculture lacks the lure of a company with a technology that will disrupt the way things are done, but it fits part of the definition of disruptive technology — one that displaces an established technology and shakes up the industry.

There are four pillars basic to regenerative agriculture:

The company has partnered with regenerative farmers to produce, and market branded healthier foods for Australian consumers and for export throughout South-East Asia. A subsidiary company has developed a protected cropping technology for growing vegetables that minimises open field cropping risks from hail, frost, and extreme heat and cold.

Land for Reasons is a wholly owned subsidiary that purchases agricultural land for restoration to accommodate regenerative agricultural production.

Wide Open Agriculture has introduced a plant-based milk product, made from oats. The company is working on a plant-based protein in conjunction with the Commonwealth Scientific and Industrial Research Organisation (CSIRO) and Curtin University.

Wide Open Agriculture has already patented the technology it plans to use to turn Lupin, a common livestock feed, into a plant-based protein “superfood,” rivaling the current leading plant-protein source – soy.

Wide Open Agriculture has a market cap of $78 million, closing the week at $0.78.

There are two ASX Agri-Tech stocks that have yet to make much progress. Both promised revolutionary agricultural production technology.

Roots Sustainable Agricultural Technologies (ROO) and Roto-Gro International (RGI) both listed around the same time as Wide Open and Bio-Gene but have been in a downward trend since listing. 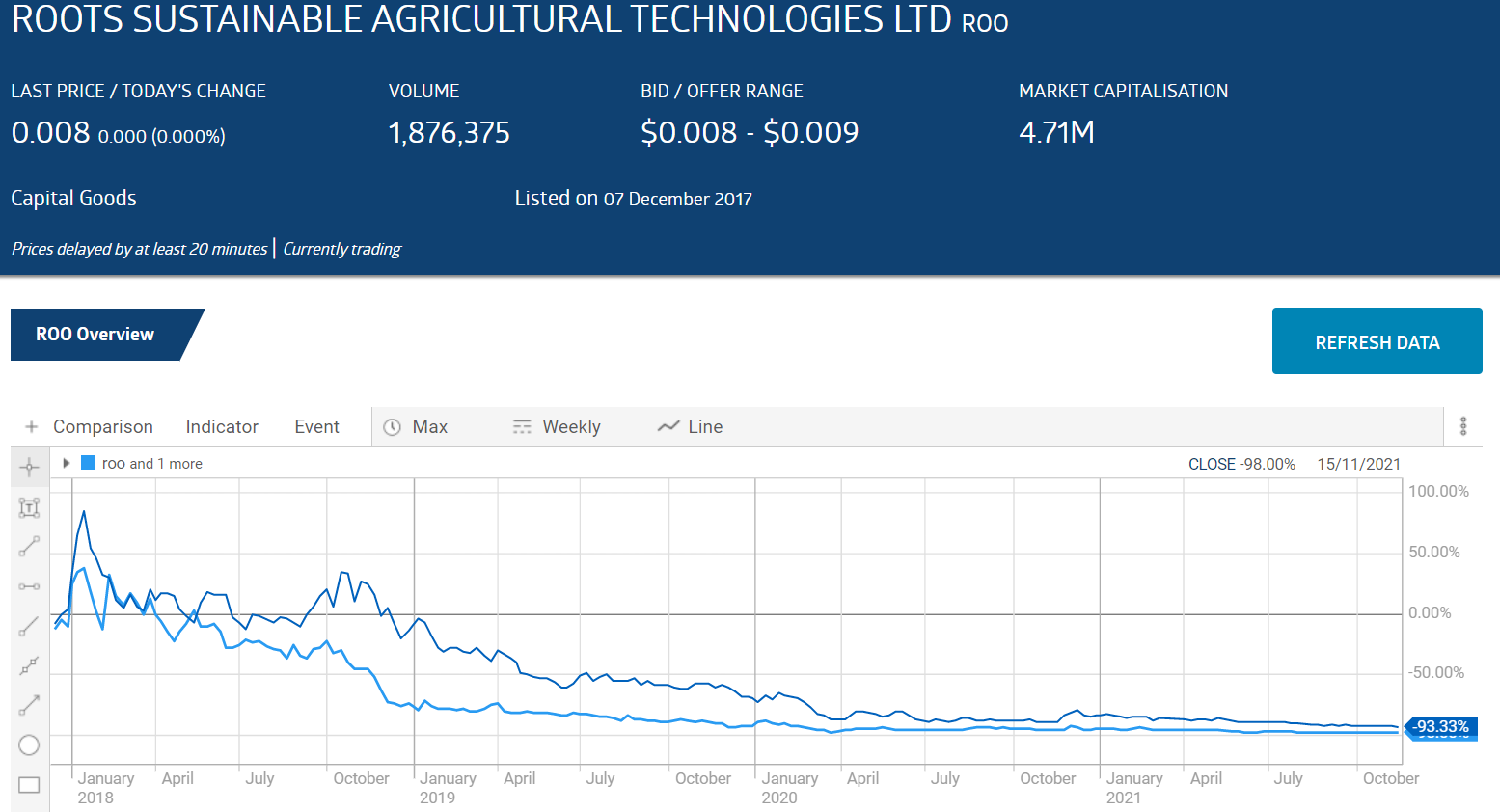 Roots is a high tech developer of systems for controlling root temperature, irrigation through condensation. The company has produced produce using its technologies and is now getting into cannabis production. Roots has a market cap of $5 million and trades as a penny stock.

Roto-Gro is another high tech company with an unrealised potential for disruption. Roto-Gro is also focusing on employing its technology in the cannabis sector. The company has a vertical hydroponic (gardening without soil) system. Roto-Gro has a market cap of $9 million, closing the week at 3 cents per share.

Long term investors are often on the lookout for stocks …