Reducing Risk in the Search for Healthcare Ten Baggers

Peter Lynch was one of the most successful fund managers of all time. He wrote three best selling books on investing and a phrase introduced in the book One Up on Wall Street seems a timely topic – “ten bagger.”

Since the onset of the pandemic an already accelerating trend caught fire – young newcomers flooding share markets. Perhaps the early intent of many was to follow Lynch’s advice and search for stocks with the potential to return ten times the amount of money initially invested – a ten bagger. In the past few days investors around the world have watched in fascination as a subgroup of the social media site Reddit – WallStreetBets – once again copied the long employed hedge fund tactic of mass buying to drive up the price of a stock targeted by the social media followers, creating in the process not ten baggers but hundred and even thousand baggers.

Howls of protest arose from within much of the professional investment community, some of it cloaked in the garb of warnings of excessive risk.

Of course investors who take the time to learn about stock markets know there is no such thing as a risk free investment. They also know some investments are riskier than others.

One of the best risk avoidance strategies is to invest in index funds or exchange traded funds specialising in targeted stocks. While that approach minimises risk, it fails to get the blood pumping. Only a search for the big win – the ten bagger and beyond – can do that.

For many investors both young and old, healthcare and technology are “hot” sectors abounding in mega trends sure to enrich those bold enough to make the big bets. The aftermath of the release of successful clinical trials virtually guarantees a big upward move for most healthcare stocks. Even the technology sector cannot compete with that.

In anticipation of clinical trials a stampede of investors can drive a stock price “to the moon” when a segment of the market in which they operate gets hot. There is no better example to illustrate the point as well as the inherent risk in some healthcare stocks than former market darling Mesoblast (MSB).

In March of 2009 newly elected US President Barack Obama ended that country’s ban on stem cell research and the race was on. Some investors in search of ten baggers assume more money is to be made with the largest investment dollars available, which for many assumes penny stocks.

Companies with only the vaguest of potential and even less cash saw their stock prices skyrocket.

By 2011 Mesoblast hit an all-time high. In 2013 the company embarked on its first US FDA (Food and Drug Administration) Phase III Clinical Trial. At that time Mesoblast’s market cap had reached $1.9 billion. Investors who jumped on board for a quick payout learned to their chagrin that the pathway through clinical trials is daunting. 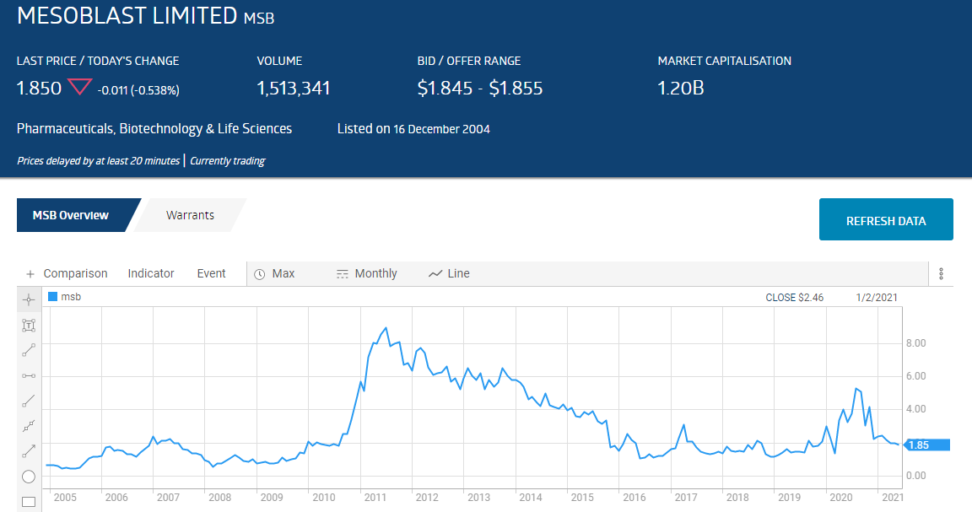 Mesoblast’s market cap has shrunk from $1.9 billion dollars in 2013 to $1.2 billion today. The healthcare sector embodies the adage that in investing the greater the reward, the greater the risk.

Like all of the Global Industry Classification Standards (GICS), heath care is further divided into sub-classifications –

There is a significant difference between the two that makes stocks within the Equipment and Services sub-classification less risky than their counterparts in Pharmaceuticals, Biotechnology, and Life Sciences.

The difference is what hurdles the company must overcome to get their product approved for use in the market. While some claim the situation has changed in the past few years, historically health care equipment and services reach the market without the rigorous and lengthy processes characteristic of sophisticated clinical trials required for treatments for human ailments.

Pharma and Biotech companies with very few exceptions have the US market as their ultimate goal, requiring a phased process of clinical trials that can extend into multiple years, not months.

In addition to the approval process, medical devices and services have another advantage over many treatment providers – market penetration. To maximise profitability over time, a pharma or biotech company needs products that treat large target markets. A diagnostic equipment provider or a medical software company might have the entire market in their sights.

The FDA defines medical devices as:

Devices are grouped into 3 classes, with only Class III medical devices requiring trials that are typically smaller and less rigorous than drug and treatment trials.

Health care investors who want to minimise risk should take the time to study the approval process for those pharma and biotechs that shoot up like rockets on holidays before falling to earth and compare that to positive reactions to device and service providers.

Right now there are a number of ASX health care stocks out from under the microscope of Regulatory Approval Trials from the FDA and our own TGA (Therapeutic Goods Administration) that have favorable outlooks. The first table includes four companies involved in medical imaging or diagnostic devices. 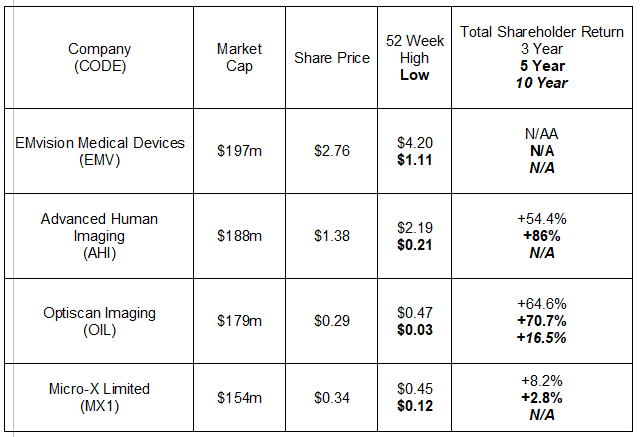 Of the four, Advanced Human Imaging has technology capable of reaching more people in need than the other three imaging companies with its smart phone based scanning capabilities.

The company’s smartphone-based CompleteScan platform is a work in progress which will ultimately include BodyScan for assessing a patient’s body composition and risk for chronic diseases, along with FaceScan for tracking blood pressure, heart rate, and respiratory rate. The final component DermaScan was approved for use in the EU on 27 May. DermaScan was developed in partnership with Triage Technologies. Advanced Human Imaging has its Biomorphik application on the iOS platform with Android soon to follow. Biomorphik will enable integration of the company’s CompleteScan capabilities.

In partnership with fellow device maker Micro-X Limited (MX1), EMvision Medical Devices (EMV) is developing two prototypes of a mobile CT brain scanner for stroke diagnosis. The work is being done in conjunction with the Royal Melbourne Institute of Technology and if successful will enable time-critical diagnoses in the field. An in-hospital CT scanner can weigh as much as three tonnes.

Micro-X is an x-ray technology company with multiple mobile products in development for medical diagnostic capabilities in both civilian and military hospitals and clinics. In addition, the company is involved in developing scanning equipment for security purposes with bag scanning and bomb detection. Some of the devices are already in use in 14 countries with Micro-X generating small but growing revenues. In FY 2018 the company reported revenues of $1.6 million which more than doubled to $4.3 million in FY 2020.

Optiscan Imaging (OIL) is a favorite among Aussie investors, with a 544% year over year gain bested only by EMvision’s 557% rise. 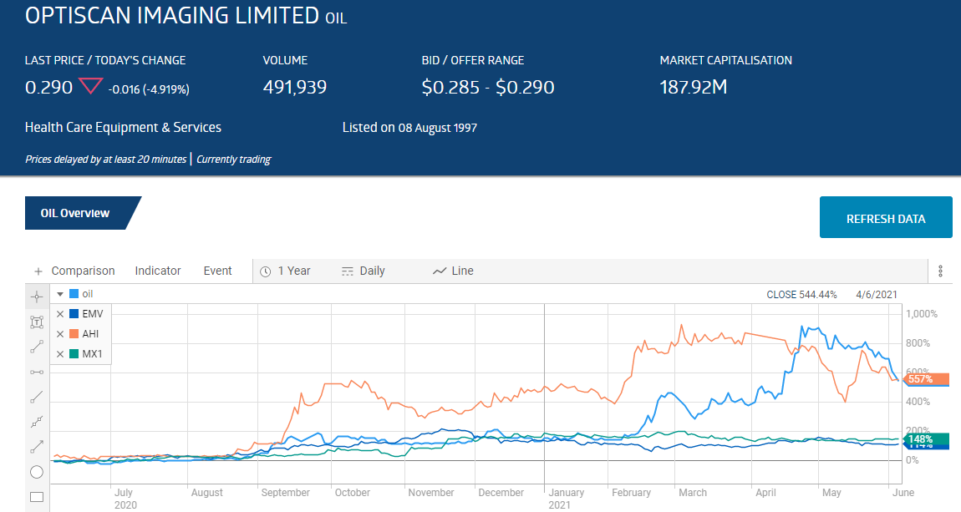 The company has an endomicroscopic imaging technology allowing “in vitro” – in the body – diagnoses at the cellular level.

The company is preparing to go to the FDA to start the approval process for its InVivage® screening device for oral cancer, but it appears progress in its breast cancer study at the Royal Melbourne Hospital and other locations that has excited investors.

The study is using Optiscan’s FIVE2/ViewnVivo that will allow 3D imaging of cellular tissue, replacing the traditional tissue extraction and laboratory analysis for cancer diagnosis.

Alcidion Group (ALC) is a health care software services company that appears close to turning profitable. The share price is up 174% year over year and up 838% over five years. In FY 2020 the company generated revenues of $18.6 million dollars, up from $16.8 million in FY 2019. In FY 2018 the company reported revenues of $3 million dollars. Analysts are forecasting an 87.5% jump in EPS (earning per share) by FY 2023, jumping from a loss of 0.3 cents to a gain of 0.5 cents per share. Earnings per share do not guarantee profitability but this company appears to be moving in the right direction.

The company’s “smart technology” software solutions are in use at 322 hospitals across the UK, Australia, and New Zealand with a recent acquisition of ExtraMed in the UK making Alcidion a “leader in the UK digital market with a 19% share” according to Alcidion management.

Alcidion also has Smartpage, a platform that uses both advanced smartphones and web-based systems for communication and task management for both clinical and non-clinical users.

On 28 April the company released March Quarter financial highlights, noting its revenue to date had already exceeded the FY 2020 total by 33%. Among the highlights in the release, this one adds to the view Alcidion is approaching profitability:

Reducing Risk in the Search for Healthcare Ten Baggers

Peter Lynch was one of the most successful fund managers …