In theory, mergers or acquisitions that can increase the products offered, market penetration, and revenues are positive developments. The initial reaction from much of the investment community pushes up the share price, as seen in the following one month price movement chart from the ASX website. South32 was first in line with its announcement on 14 October. 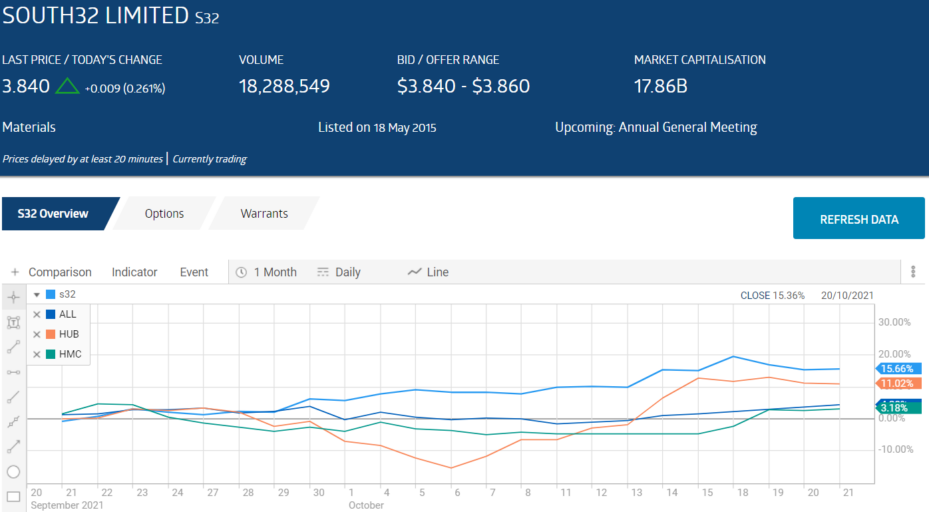 In practice the initial reaction often takes on the classic “shoot first, ask questions later” mentality. Some investors, unaware of the many inherent risks in M&A activity, are later blindsided when an unanticipated reality sets in.

More than any other factor, the availability of capital fuels M&A activity. Prior to the rise of massive capital markets, to grow a business meant improving existing products or adding new products; and increasing market penetration.

Companies grew in small steps, subject to existing cash flows. The ability to raise money from external sources changed the game. Why wait to develop on your own when the business could go out and buy a company and reap the rising revenues and profits?

The first issue that can sour the appetite of investors for the stock is the cost of the acquisition. Taking on additional debt in a company with a less than stellar balance sheet raises concerns. Funding the acquisition through capital raises dilutes the value of the stock for existing shareholders.

Both companies in the transaction should go through a rigorous “due diligence” process, that sometimes is not rigorous enough. Actual costs of an acquisition or merger extend far beyond the actual price paid in cash or stock.

On the surface, acquiring a company with a similar business model or even a direct competitor seems to make the most sense. However, the costs of eliminating the inherent redundancies in companies that sometimes are mirror images of each other can be prohibitive and often extend beyond the projected cost estimates.

It is common sense that dual operational infrastructure ranging from marketing and sales departments to warehousing and distribution centres are not needed. Nor are dual research and development divisions in addition to layers of management.

The ideal acquisition would be “bolt-on” where the company acquired provides complementary, not competitive, products, technologies, and markets.

Eliminating redundant operating segments can involve expensive employee severance payments, pension costs, and legal fees. Redundancies exist at all levels, with only one of the two divisional bosses surviving and in some cases competition amongst existing employees for a spot in the remaining business entities. In addition, the effect on the morale of remaining employees can be substantial.

Finally, the technologies in use in the two companies must be made compatible as well as the financial systems in place.

The following table includes share price performance and historical and future earnings and dividend growth for the acquiring companies. 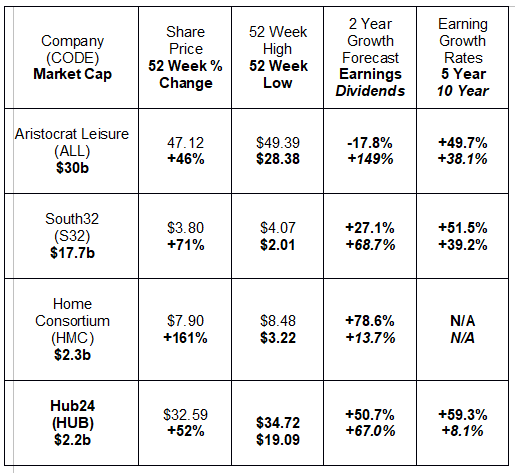 At a cost of five billion Aussie dollars, the Aristocrat Leisure acquisition of London-listed Playtech earns the accolade of a “major” acquisition with a lofty price tag. The deal received quick approval from Playtech management and board, spurred into quick action by the 58% premium Aristocrat is paying.

The deal announcement came in the midst of a trading halt, laying out how Aristocrat planned to manage the bill with its own cash, a loan, and an equity raising.

The equity offering came at an 8.6% discount to the share price and has cooled off some of the action on the Aristocrat share price which has been dropping since the completion of the capital raise.

Investors should expect a heavy dose of spruiking in most M&A deals, and this one is no exception. Here is what the CEO of Aristocrat had to say about the deal>

Aristocrat appears to have set its eyes on Playtech because of the company’s reputation, reach, and its platform technology. Aristocrat is best known for its casino-based and online slot machines. Playtech is recognised as a global leader in introducing pioneering content, software, and platform technology across twenty-four countries. The company operates in two divisions – Business to Business (B2B) and Business to Consumer (B2C).

It is not immediately clear from the announcements how many of the operations of the two companies are complementary and how many are competitive. However, Aristocrat management did state that immediately following the acquisition the company would conduct a “review” of Playtech operations to determine their alignment with Aristocrat’s with an eye toward shedding non-aligned operations.

The South32 share price was in an upward trend prior to the latest acquisition announcement as improving pricing in both coal and aluminum buoyed company revenues and investor appetites.

In late September, the company announced it was increasing its stake in an aluminum smelting operation located in Mozambique from 47% to 72%.

In mid-October South32 made another move, acquiring a 45% stake in the Chilean copper mine Sierra Gorda at a price tag of approximately AUD$2.1 billion dollars. Both acquisitions are expected to contribute to the company’s financial performance for the remainder of FY 2022.

The Sierra Gorda mine can also produce gold and silver, fitting in with South32’s status as a diversified miner of multiple commodities. However, company management stated their primary interest was a continued “reshaping of our portfolio for a low carbon world.” South32 plans to reach carbon neutrality by 2050 with its aggressive plans to run each of its mining operations with renewable energy.

Home Consortium stepped in following the demise of the Masters Hardware chain and scooped up multiple sites with a vision of creating smaller footprint spaces. The result was higher revenues from more rentals. Home Consortium eventually spun off the smaller format sites into a REIT, listing on the ASX on 30 November of 2020 under the banner HomeCo Daily Needs REIT (HDN). The share price is up 20% since listing and the entity now owns nineteen sites while the parent company owns and operates thirty-five centres filled with Australian big brand retailers.

The proposed merger is between HDN and Aventus Group (AVN), an owner/operator of twenty large format retail centres. The announcements and statements from the companies have nothing to say about potential redundancies. However, the Aventus portfolio focuses on suburban homemaker needs while the HomeCo Daily Needs operation focuses on essential shopping needs.

This move is meant to dramatically accelerate the growth of the parent Home Consortium, whose assets under management (AUM) will jump to close to $5 billion dollars, a 127% increase over FY 2021. Home Consortium will have a 13.5% interest in the merged entity but maintain management control. There are regulatory hurdles from both the ASX and the ASIC (Australian Securities and Investment Commission) to overcome, but the deal is expected to be completed by February of 2022.

HUB24’s all-encompassing investment and superannuation platform serves the investing needs of virtually every member of the investing community — financial advisers, stockbrokers, accountants and their clients, and direct consumers. In addition to the award-winning platform the company provides additional financial products for the sector and consulting services.

HUB considers Class (CL1) a complementary company with its cloud based technology platform focusing on accountants, administrators, and financial advisers. Should the deal go through, HUB management has stated that Class will operate as an independent business under its own leadership within HUB. Class shareholders should be delighted as the one for eleven share transfer and the ten cents a share sweetener comes to a 71.6% premium over the last trading price of Class shares prior to the announcement.