Newcomers to share market investing emboldened by the dramatic reversal in market movements in late March of this year have to remain dazed and confused. Months of tracking market movements could easily lead to the conclusion that negative economic news matters little to profit-hungry investors. It is the future that counts and to a large degree our collective economic futures are being driven by the timing of the ending of the COVID19 Pandemic.

A corollary of that observation should be that good economic news bodes well for the time and strength of an economic recovery.

Then came the 17th of September when ASX market participants had to be shocked by positive employment numbers across the board, expected by no one.

The forecast for an additional loss of 35k jobs was demolished with the announcement of 111k jobs added. The unemployment rate of 7.5% was forecasted to rise to 7.7%. It fell to 6.8%. It now appears the earlier prediction that unemployment would bottom out at around 10% is unlikely.

For the month of August, every state and territory saw increases in the number of employed people, with the exception of the state of Victoria where new measures to combat increasing coronavirus cases went into effect.

And the market reaction to this blockbuster news? The ASX 200 fell 1.2%, reportedly in anticipation of potentially declining markets in the US.

US markets delivered as expected in a surprising reaction to the latest news out of the US Federal Reserve Board (the Fed). Both the S&P 500 and the NASDAQ saw declines with the Dow Jones Industrial Average (DJIA) up slightly.

Investors who follow US markets should know historically low interest rates dictated by the Fed have driven markets upward, as “easy money” spurs economic activity. Another view, largely ignored, is that low rates are a sign of a weak economy.

The latest announcement said the Fed sees rates staying low until the end of 2023 at the earliest. This time US investors seem to have latched on to the heretofore contrarian view from some that keeping rates at their lows hardly suggests a quickly recovering economy.

In Australia we remain in an arguably better position than most world economies, with the following positive indicators:

Planned changes in federal stimulus programmes for consumers pose a risk for both general consumer spending and home sales. Gold is likely to remain in the spotlight of investors, although not without volatility. Iron ore prices have reached levels not seen since 2014 due to lower production out of Brazil and rising demand in China from stimulus spending on infrastructure projects in the face of the pandemic economic slowdown there.

While there is general consensus iron ore prices will decline, US based mega investment bank Goldman Sachs recently upgraded BHP Group (BHP) from neutral to BUY based on Goldman’s forecast the expected 2020 Q4 surplus levels will be temporary with continued growth in China steel production and demand recovery in the rest of the world bringing pricing back into balance through 2021. 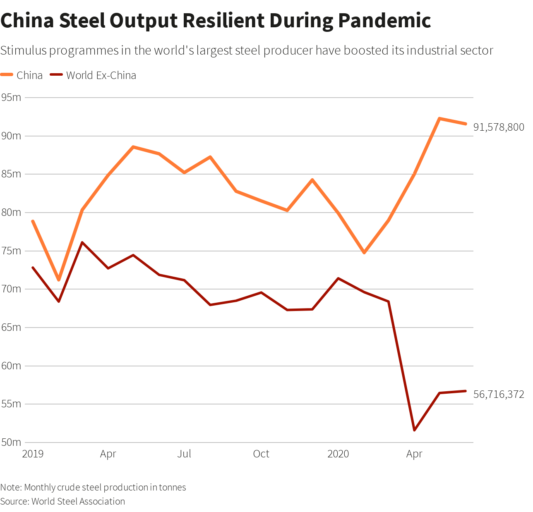 Skeptics should look at China’s latest year over year 5.6% rise in industrial output, the fifth straight month of increasing output.

While our top three iron ore miners have thrived in the six months since the recovery from the short-lived Bear Market spawned by the pandemic, the same can not be said for the top providers of mining services upon whom the miners rely. The following price movement chart from the Reuters financial website compares the price performance of BHP Group (BHP), Rio Tinto Group (RIO), and Fotescue Metals Group (FMG) with Monadelphous Group (MND) a diversified services provider that derives most of its revenue from iron ore projects. 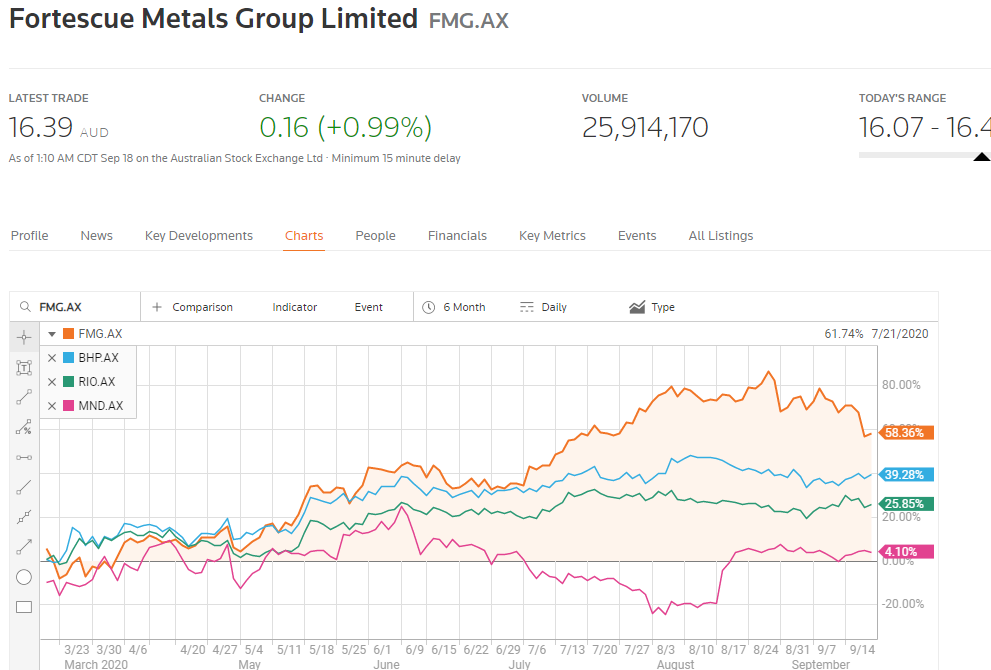 Among the indicators professional investment analysts consider in their forecasts, capex or capital expenditures, are paramount in importance. In struggling sectors, companies do not risk investing in growth ventures from acquisitions to exploration to expansion of existing operations to opening new operations.

Over the last few months, at least four service providers to the resources and other sectors have announced new contracts, with Monadelphous being the most recent among them. Some are for modifications and expansion of existing mines and others are for new operations. Taken together, they indicate confidence in the future on the part of the companies investing in these growth initiatives.

The following table includes all four with 52 week price movements.

On 14 September Monadelphous updated the market with news concerning existing and new contracts with BHP Group (BHP). Most service providers offer both new construction services and maintenance services of existing operations. The BHP contracts in question were for upgrades and expansions of existing operations and for “multi-disciplinary construction services” at BHP’s Olympic Dam copper mine in South Australia.

The news sent the MND already rising share price to $10.67, a 2% increase from the prior close of $10.44. The company’s 18 August release of Full Year 2020 Financial Results had already sent the share price up close to 17% and it has been climbing ever since.

Mondelphous was one of several service providers warning of the potential impact of the coronavirus due to “ the delay, suspension, deferral or reduction of services across a range of the company’s projects and worksites, as well as materially disrupting productivity levels.”

Later quarterly reports led at least one major analyst firm to state that providers who withdrew guidance may have done so more for the perecption of inherent risk rather than the actual impact.

Although Mondelphous management claimed in the financial release the second half of FY 2020 was impacted by the pandemic, the company still managed to post record revenues, up 2.6%, with a lower than expected profit loss, down 27.8%.

The company added over $550 million in new and extended contracts and pointed to a positive outlook for the resources sector, with possible downturns in other sectors due to the pandemic. The company is broadly diversified, serving the resources, energy, and infrastructure sectors around the work with both constucion and maintenance services. 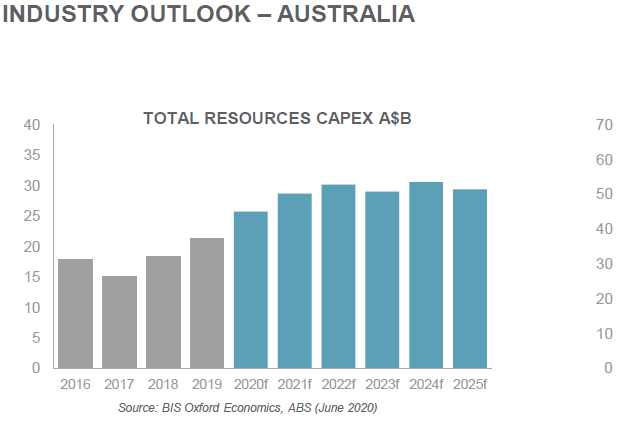 The contract is for the base infrastructure at the Warrowoona Gold Project, owned by Calidius Resources (CAI). The construction includes an accommodation village, an access road, communciations and water supply in anticipation of main project construction in Q1 of FY2021, with Macmahon named the “preferred tender” for this new open cut mine.

In the company’s 26 August Full Year 2020 Financial Results release, Macmahon management noted limited impact from COVID 19, with the actual results backing up that claim. Revenues were up 25% and NPAT up a stunning 41%. The company’s existing order book for FY 2021 stands at $4.5 billion, with outstanding tender offers of $7.5 billion that could reap another $2 – 4 billion in the next twelve months.

Unlike the broadly diversified operations at Monadelphous, Macmahon is primarily a provider of mining services for the resources sector, from engineering and construction to operation and maintenance.

Maca Limited (MLD) had two new contract announcements to the market since 2 July.

The 2 July announcement was for a 62 month, $230 million dollar contract with Atlas Iron for drilling, blasting, loading, and hauling at the Atlas Corunna Downs Gold Project.

The second, announced on 27 August, is a contract with Capricorn Metals (CMM) for ancillary work at the Karlawanda Gold Project beginning in December of this year with open pit mining to commence in the Amarch Quarter of 2021. The contract is for five years with a possible extension, valued at $400 million.

Maca is more diversifed than Macmahon, offering civil construction and infrastructure services in addition to its mining, crushing, and processing services. The Full Year 2020 Financial Report was disappointing, posting an 84% profit loss despite a revenue increase of 24%, attributable to the impact of the pandemic on some of the company’s coal businesses.

GR Engineering Services (GNG) serves the mining sector with the design and construction of minerals processing facilities and related infrastructure for plant modifications, upgrades, and expansions. The company also serves the oil and gas sector with operations, maintenance, and project advisory services.

On 16 September the company announced it had been selected as “preferred tender” for the design and construction for the processing plant and its related infrastructure at the Warrawoona Gold Project owned by Calidus Resources (CAI). Macmahon got the contract for base infrastructure and open pit mining at the same project, with construction already started, ahead of schedule.

While management stated the company’s Full Year 2020 Financial Results were not impacted by the pandemic, the solid 22% rise in revenue was offset by a loss of $9.7 million, attributable to a one time write off of an uncollectable receivable.

The following chart from Reuters shows the stock price performance for all four in the six months since share markets began the recovery. 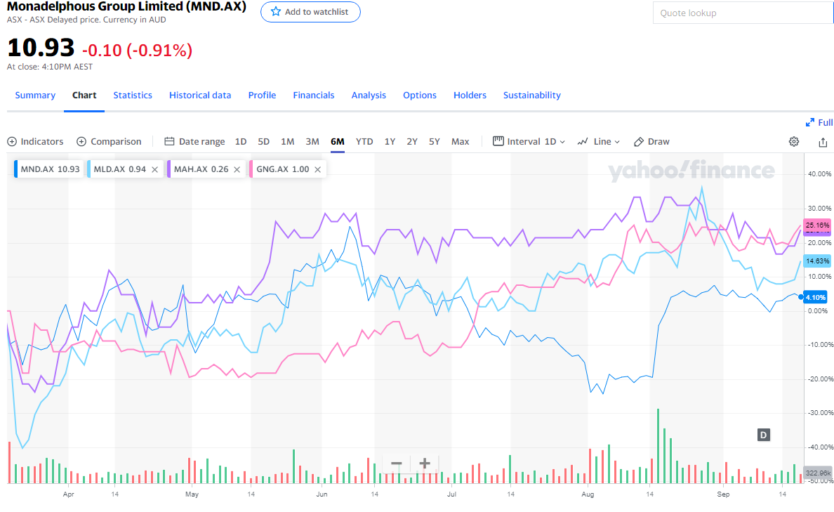 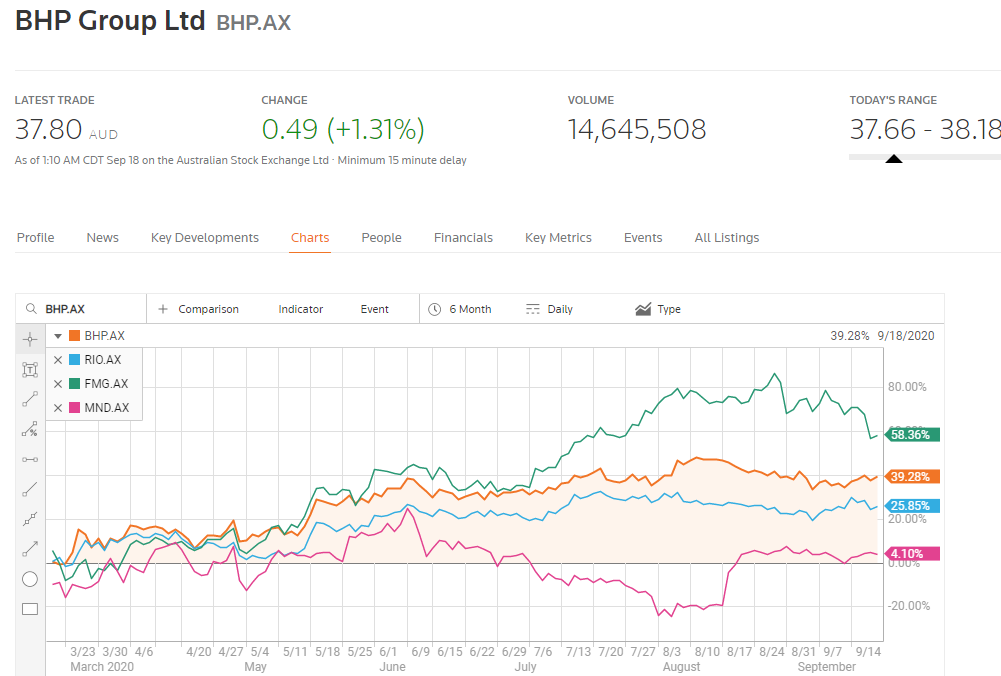 Newcomers to share market investing emboldened by the dramatic reversal …