Over 150 years ago the first regional stock market in Australia was formed in Melbourne. Additional regional exchanges soon followed in Sydney, Hobart, Brisbane, Adelaide, and Perth.

It took until 1979 for the first uniform market index to integrate the regional indices into a single index representing the entirety of the Australian stock market activity. In 2000 Standard & Poor stepped in with a new benchmark index, the S&P ASX 200.

As of November of 2018, the ASX ranks sixteenth in global stock exchanges.

Making the coveted list of the top two hundred stocks in Australia is a high water market for companies entering the index for the first time. Entry is based on a formula combining “free-float” market capitalisation and liquidity. With market cap calculated by multiplying the current share price by ordinary shares outstanding (those that “float free” to be traded). This translates into share price being the major factor determining entry and exit from the ASX 200.

S&P rebalances the index based on market cap changes on the third Friday of each March, June, September, and December.

Getting onto the ASX 200 is a significant move, as it can determine what the largest fund managers can invest in. Funds that track the index add new entries and typically sell those removed.

The latest rebalancing included two former market darlings buoyed by significant upticks in online sales during the COVID 19 Pandemic – Kogan.com (KGN) and Redbubble (RBL). The following five year price movement chart from the ASX website attests to the status of the two companies in the eyes of Aussie investors. 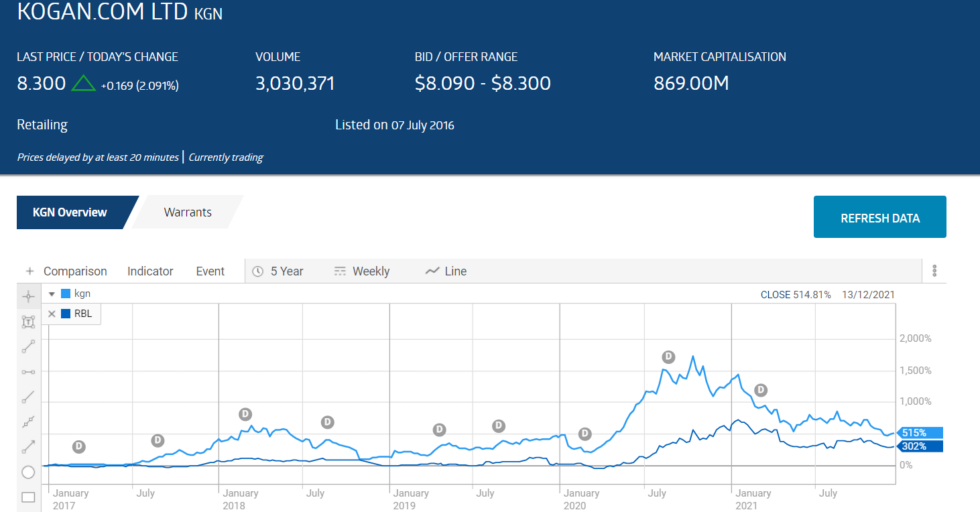 Times have changed, and year over year, Kogan is down 55% and Redbubble is down 46%.

The following table includes price performance along with growth estimates where available for the five companies. 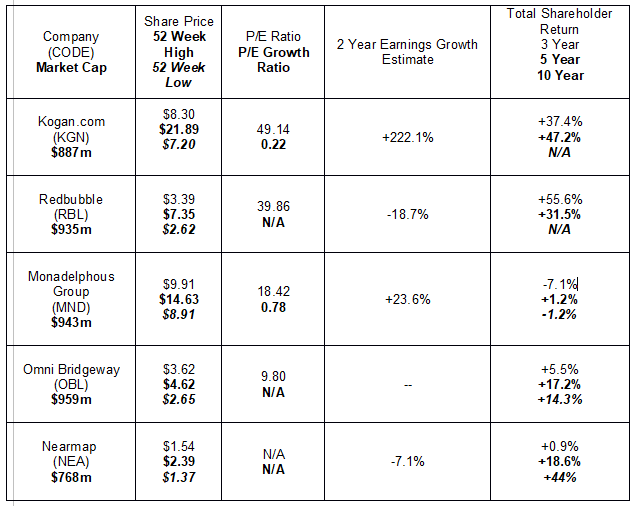 Assuming analyst estimates prove true, Kogan.com and Monadelphous appear to be solid growth prospects in the short term. Omni Bridgeway has two analysts covering the stock with BUY recommendations and forecasted sales growth of 279% to 2023, but no earnings estimates.

In response to high demand forecasts from the first half of FY 2021, Kogan management made the decision to expand its inventory to meet the demand, which failed to materialise. Operating costs rose to manage the inventory increase, leading to discount promotional selling.

The company continued its practice of providing no formal guidance for FY 2022, opting instead to rely on a series of trading updates. These updates consistently point to rising sales coupled with declining earnings, although at its AGM (annual general meeting) Kogan management described the inventory issue and associated costs as under control. As of 25 November of 2021 the company’s EBITDA (earnings before interest, taxes, depreciation, and amortisation) was down 61%. The latest update announced strong growth during the Christmas period to date, experiencing seven of its biggest trading days in its history during the Black Friday period.

Like Kogan, Redbubble benefited handsomely from the “stay at home” period and subsequent lockdowns. As the world learned of the sooner than anticipated availability of vaccines, both companies saw their share prices begin to fall and the short sellers took notice. In the lists of top ASX shorted stocks, Kogan ranked #3, followed by Redbubble at #4, as of 10 December.

Kogan has the advantage over Redbubble with its highly diversified business model and growing online presence, both in customers and available products. Kogan operates multiple other businesses in addition to online retailing, while Redbubble acts as a business intermediary between consumers and creative artists. The artists post designs on the Redbubble website and consumers can order the design imposed on a variety of products, with each product created individually by third party providers. A Redbubble subsidiary – Teepublic.com – provides custom design tee-shirts and other apparel.

While the short-sellers appear confident Redbubble will not rebound in the short term, in the longer term eCommerce sales continue to grow as does the demand for unique and individualised custom products.

An October trading update concluded with company management remaining optimistic about the second half of FY 2022. Performance in the first half continued weak, with First Quarter 2022 revenues down 28%; gross profit down 34%; and EBITDA down 85%. The company actually turned a profit in FY 2021 but reported earnings per share of 11.3 cents are forecasted to drop to 4.3 cents per share in FY 2022 and 7.4 cents per share in FY 2023.

Monadelphous is global in scope, with and engineering construction division and a maintenance and industrial services division operating here in Australia as well as in New Zealand, the United States, China, Papua New Guinea, Mongolia, and the Philippines. The company counts among its customers businesses in the energy, resources, and infrastructure sectors.

The share price dropped significantly as the COVID 19 Pandemic first appeared but had entered an upward trend in October of 2020. Year to date, the share price entered a downward trend that worsened following the release of the company’s Full Year 2021 results.

Despite an 18% increase in revenues and a 29% rise in net profit after tax (NPAT), the share price dropped about 13% intraday. Investors can be a fickle breed, and apparently the positive financials were not enough to counter balance the less than fully positive outlook for FY 2022. Monadelphous management advised investors to expect lower revenues in FY 2022 as the company would continue to suffer from the shortage of skilled labor.

Omni Bridgeway was know as IMF Bentham prior to March of 2020. The company is part law firm and part investment firm but its prior focus is large scale litigation funder. The risk to uniformed investors became obvious when the share price dropped following the announcement the Supreme Court of New South Wales ruled unfavorably in a class action suit (Brisbane Floods Wivenhoe Dam) – 50% funded by Omni. Omni is now appealing the decision to the Australian Supreme Court.

Funding large scale litigation makes for a challenging task for the average retail investor to understand the value of Omni’s investment portfolio and the potential revenue from each investment.

Earlier in the year the company had considered delisting from the ASX, at the request of major institutional shareholders but decided to remain on the ASX.

Nearmap provides aerial imagery of literally anything and provides artificial intelligence (AI) based data analytics on the image. Its 3D imagery solutions are used by any organisation looking for information on buildings and land under their control as well as adjoining sites.

Nearmap’s reputation as a high-tech provider has earned accolades from analysts and experts alike, lauding the company’s long term potential. In the short term, the company is investing heavily in the future while remaining unprofitable. Multiple capital raises over the years have fueled the growth efforts.

Nearmap has been a target of short sellers intermittently and the share price year over year is down 35%. The company operates here in Australia as well as in New Zealand , Canada, and the US. The US market in particular hurt the company with some customers shutting down during the peak of the pandemic.

However, the US market is the prize and Nearmap shareholders got some welcome news on 13 December. Nearmap management announced increasing demand in the US will put the company’s ACV (annualised contract value) ahead of the ACV in Australia and New Zealand in early 2022. The US ACV exceeded USD$50 million dollars year to date, already surpassing the FY 2021 total of USD$44.5 million.

Nearmap expects the US market to account for the lion’s share of its business and is aggressively pursuing three key sectors there – government, insurance, and roofing. In the roofing sector the company is expanding its push to capture more of the solar market in the US.

Investors were impressed with the news. 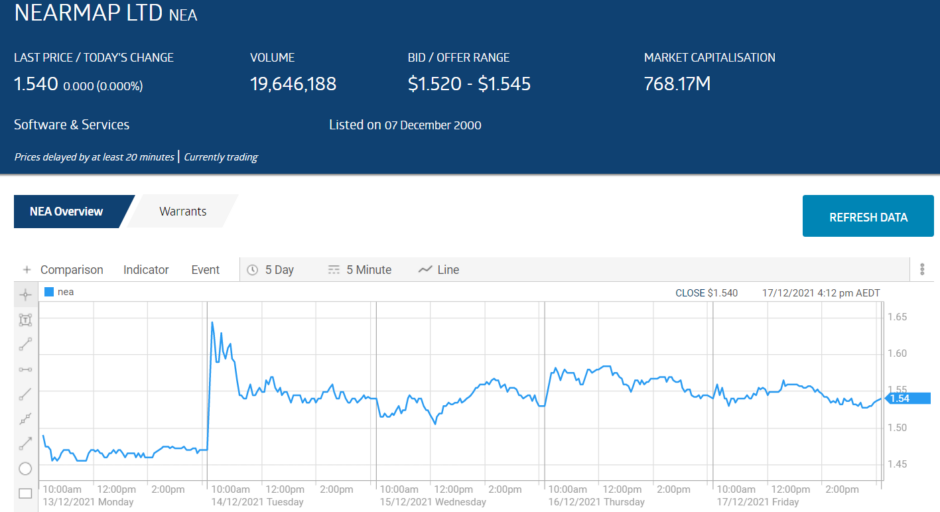 Over 150 years ago the first regional stock market in …