Remember the death of the mining boom?

A few days ago in an interview with news.com.au, a Deloitte economist made the following observation:

The surge is best seen in the following chart from indexmundi.com, in Australian dollars. 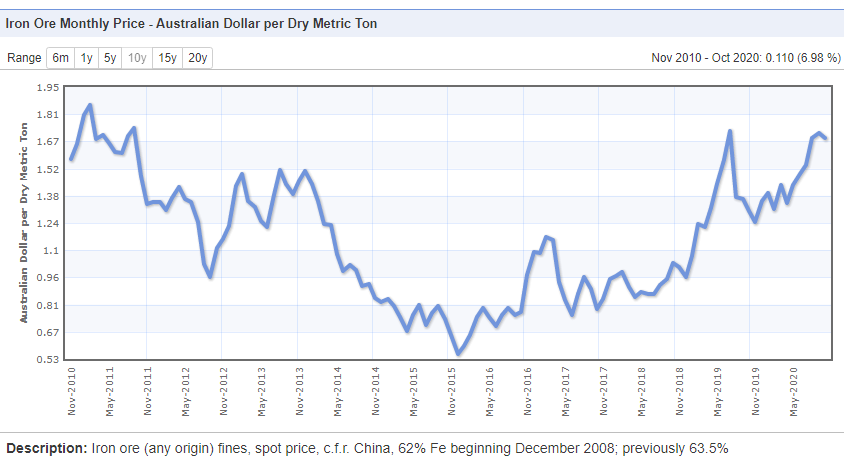 When the Singapore iron ore futures market topped USD$150 per tonne that marked the highest level since 2013. 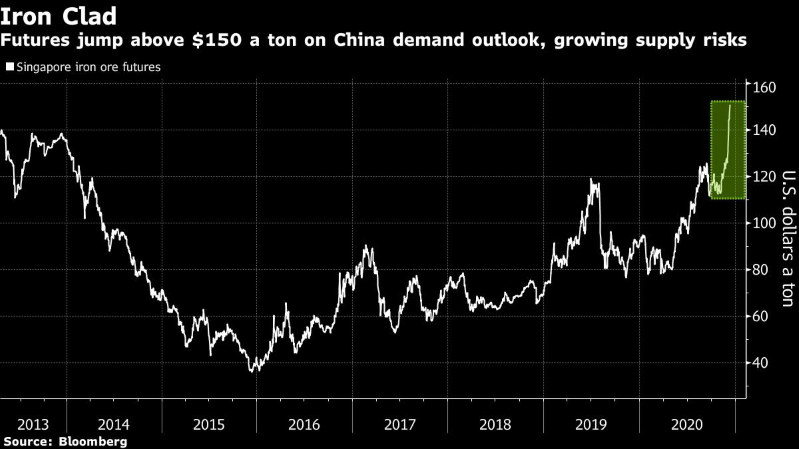 The price dropped slightly in October and November and the 15 December media reports of a Chinese ban on Australian coal sent shivers down the spines of iron ore investors, fearing iron ore could be next. A report out of Reuters that Chinese steel makers were seeking a “regulatory probe” of the rapidly escalating iron ore price added to the wall of worry.

However, some industry experts maintain the bullish trend for iron ore remains intact due to rising Chinese demand and supply constraints, largely fueled by the continuing problems plaguing Brazil’s Vale. The thinking seems to be the Chinese cannot restrict iron ore imports from Australia in light of declining production out of Brazil. They are producing steel at reported record levels, with estimates of annualised steel production around 1.1 billion tonnes.

In the past week investors have been treated to numerous opinion pieces telling them the “new” iron ore boom will more than compensate for the Chinese trade restrictions leveled against other Australian exports. A quick look at iron ores price rampage in 2020 makes the case. 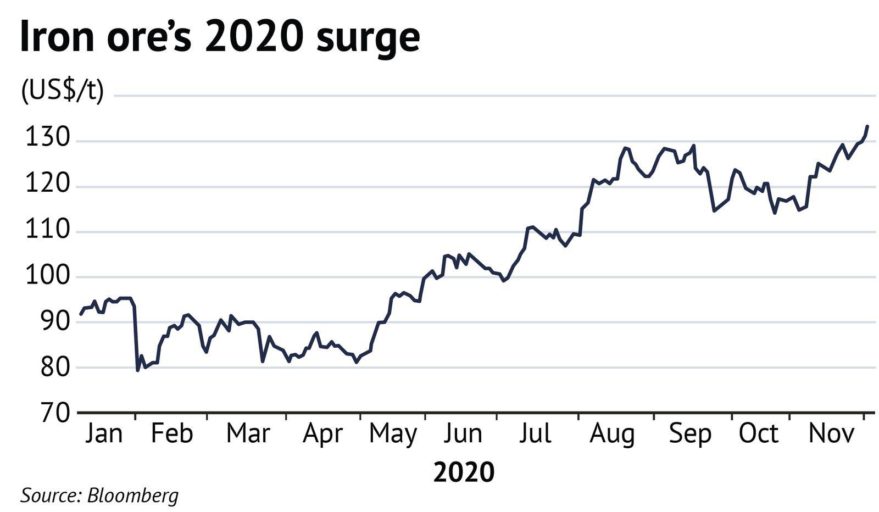 Iron ore miners, both the big names and the junior explorers, are making moves to increase supply. Some are planning to reopen iron ore mines shuttered when iron ore prices were low.

The following table includes five junior miners by market cap looking to ramp up. There are others but the criterion for selection was share price appreciation year over year near or in excess of 200%. 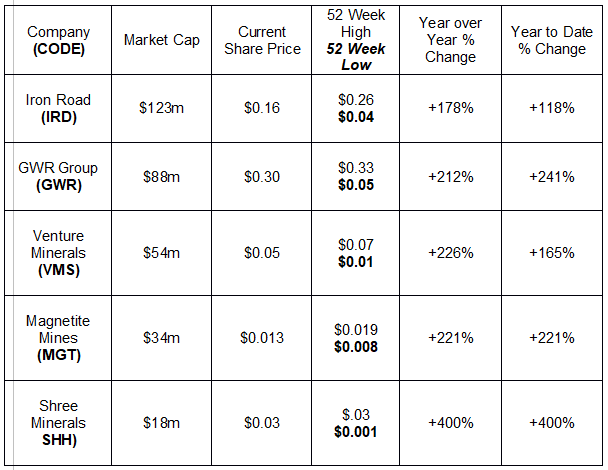 Iron Road is not one of the companies taking a shuttered mined out of mothballs, but it does have a major development project – Central Eyre Iron or Project (CEIP) — nearing production in South Australia.

Iron Road management states CEIP is expected to produce 20 million tons per annum (Mtpa). A definitive feasibility study (DFS) is underway and has already shown a resource base at CEIP identified to date coming in at 2.5 billion tonnes. The expectation for resources of that scale suggests more than 30 years of mining life at CEIP.

The company has a smaller project – the Gawler Iron Project – with a scoping study underway, but CEIP is the flagship project for Iron Road.

In a surprisingly candid statement on the company’s website, Iron Road management said the company could not develop the needed rail and port infrastructure without an industry partner.

On 24 September, the company announced they had their financial and development partner – Macquarie Capital. Macquarie signed on to work with Iron Road on the Cape Hardy Port, a facility to serve multiple users and multiple commodities.

Investors buoyed by the news drove the share price up from just over 10 cents a share to close to 17 center per share by the end of trading. 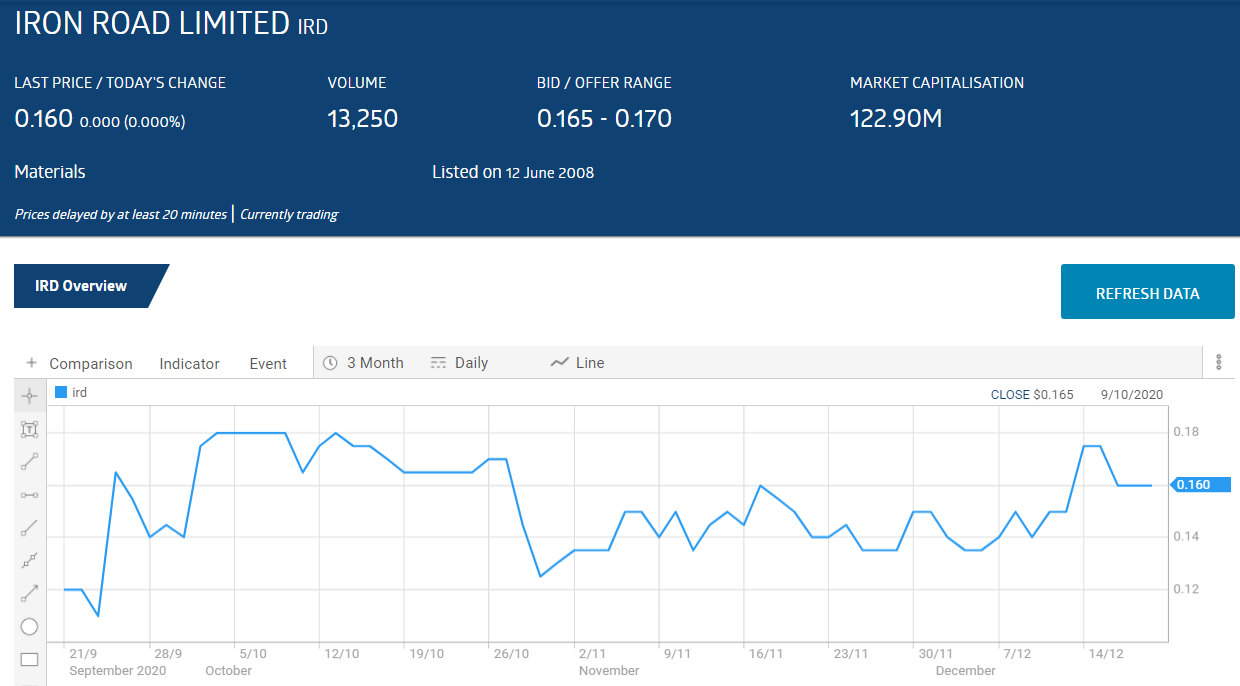 GWR Group is a multi-commodity miner with assets wholly owned, in joint ventures, and in equity investments in other miners. The company has a highly prospective iron ore asset – the Wiluna West Iron Ore Project. The company has mining approvals in place with resource and mine life estimates, but the GWR website states” No activities other than care and maintenance are envisaged, with expenditure exemptions under the Mining Act currently in place.”

The share price began rising on the news, dipping upon the latest concerns over the reported China coal ban extending to iron ore. 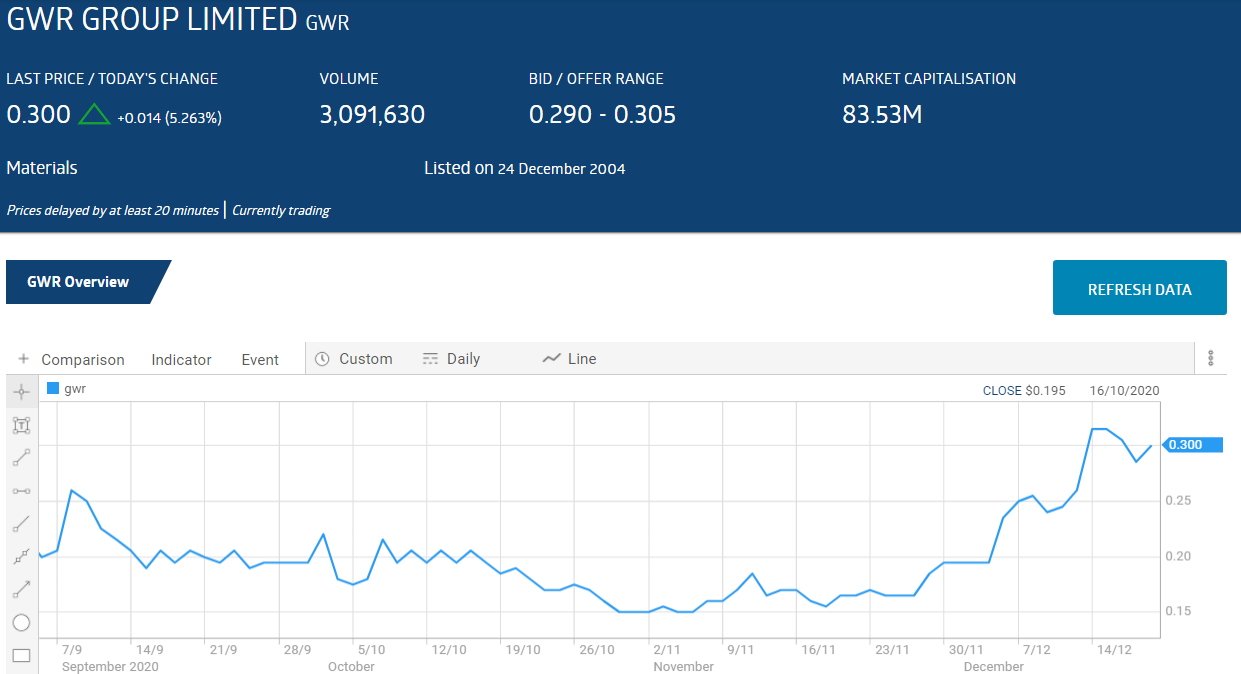 Venture Minerals is another multi-commodity miner with assets in copper, lead, zinc, tungsten, nickel-cobalt, and nickel-copper.

In 2014 Venture ceased producing iron ore from its Riley iron ore mine in Tasmania due to low iron ore prices. On 22 August of 2019, the company announced Riley was back in focus. A prefeasibility study was substantial enough for Venture to include in the announcement an updated offtake agreement with Prosperity Steel for 100% of the Riley iron ore mine’s production in its first two years. Processing plant construction at Riley is nearing completion and in an 8 December Investor Presentation management stated production at Riley is expected to commence in the first quarter of 2021.

Magnetite Mines has been working on the Mawson Iron Project in South Australia since at least 2013 when a prefeasibility study warranted the Razorback Premium Iron Ore Project within Mawson as Magnetite’s flagship operation.

Five years later the project is still years away from production, expected to commence operations in 2024. In addition, the iron ore at Razorback is magnetite iron ore, requiring a separation processing step prior to shipping. Once processed iron ore from magnetite is of a higher grade than the more common hematite iron ore, but it cannot be direct shipped. Yet investors remain enthusiastic about this company’s potential. While the project has progressed through a series of successful studies and capital raises, it is likely the investor patience can be explained by the size of the resource base – four billion tonnes.

As iron ore prices gradually improved the company in early 2019 began the process of re-permitting the Nelson Bay project. Shree is still pursuing its gold and base metals assets but is now pursuing Nelson Bay as its flagship operation.

The plan as of now calls for two years of DSO (direct shipping ore) of hematite ore and then shifting to magnetite mining and related processing operations. Shree management will make the final decision on starting the DSO operation in 2021. The company claims work to date has the mine capable of resuming operations on short notice.

The Nelson Bay Iron Ore Project is wholly owned by Shree Minerals and is located in a mining area of northwest Tasmania, with suitable infrastructure in place.

On 14 December, an Investor Presentation with precise details on the scope and progress of the Nelson Bay Project and the resource base as well as encouraging news on the company’s other projects which remain ongoing impressed investors. The share price shot up 100%, from $0.133 to $0.266 over two days before falling back to the current $0.20.

While some investors fear the prospect of the trade war with China swallowing iron ore along with the other commodities affected to date, others support the view China simply cannot do without our iron ore.

There are two sides to the China argument. The positive spin is that the Chinese economy is the only economy on the planet experiencing the rapid, V-shaped recovery other countries hoped for. Investors might be more concerned about the status of the US economy where a downturn would not affect Chinese steel production.

The US markets have moved and fallen on the twin issues of the availability of a COVID 19 vaccine and more fiscal stimulus from the US government. US markets closed the trading week of 14 December on a downward shift, fueled by continuing obstacles to the stimulus promised by year-end.

What some investors may be missing are two issues. The first is that the fact more stimulus is needed is a sign of a stalling recovery. Another week of higher than expected unemployment claims supports this view.

The second is that multiple experts in the US claim the proposed stimulus, even if it passes the US Congress is not enough, and the prospects of the new administration getting additional stimulus through the US Senate, controlled by the opposition party, are questionable at best.

Remember the death of the mining boom? A few days ago …