On 12 December of 2014, the price of iron ore hit a five year low, prompting the head of BHP Groups iron ore mining operation to declare it unlikely the iron ore price would again see $100 per tonne.

Doomsday prophecies gone wrong delight those skeptical of the claims, and this prophecy has to be one of the all-time great misses. Following multiple new all-time highs, the price of iron ore as of 19 May in 2021 settled down at USD$211.96 per metric tonne.

Investors who have been in the markets for more than a decade should remember the market stampede into junior ore miners as the Chinese demand for steel seemed insatiable. Perhaps spurred on by the famous observation from US investing guru Peter Lynch that “big companies don’t make big moves,” Aussie investors showed an insatiable appetite for mid-cap and junior iron ore miners.

History appears to be repeating itself. There are more than nine iron ore miners surging, with some vaulting from junior to mid-cap status by market cap. Three have seen year over year share price appreciation in excess of 500%, with the leader of the pack – Magnetite Mines (MGT) – up more than 4,000%.

However, history was not kind to several once hot junior iron ore miners that have disappeared from the ASX, either through receivership or takeover.

None of the current high-flyers are producing revenue. The following table lists the three with the most relevant metrics in the exploration and development stage in which these companies find themselves – debt and cash on hand. 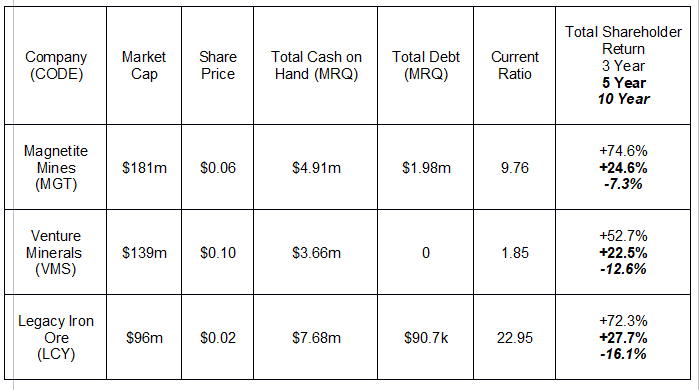 The costs of bringing iron ore deposits from discovery and exploration to operational status is significant with surprises along the way that can increase project costs. Companies like these in early start-up stages need low levels of debt and adequate cash on hand for both short and long term needs. Borrowing money for development costs increases risk and raising money via stock placements disappoints many investors, driving down the share price.

As of the most recent quarter (MRQ) all three of these companies qualify as low-debt explorers. Total cash is modest at best but the measure of the company’s ability to handle short term debts (due within a year) – the Current Ratio – is more than adequate for two out of the three. A Current Ratio between 1.2 and 2.0 greater than one is deemed sufficient, although Benjamin Graham, the father of value investing, preferred a minimum Current Ratio of 2.0.

There are few iron ore minors large or small that have not seen impressive year over year share price appreciation with another four junior/mid-caps posting increases in excess of 300% and numerous others around 100%. These three with appreciation of 500% or more stand out as favorites for investors. 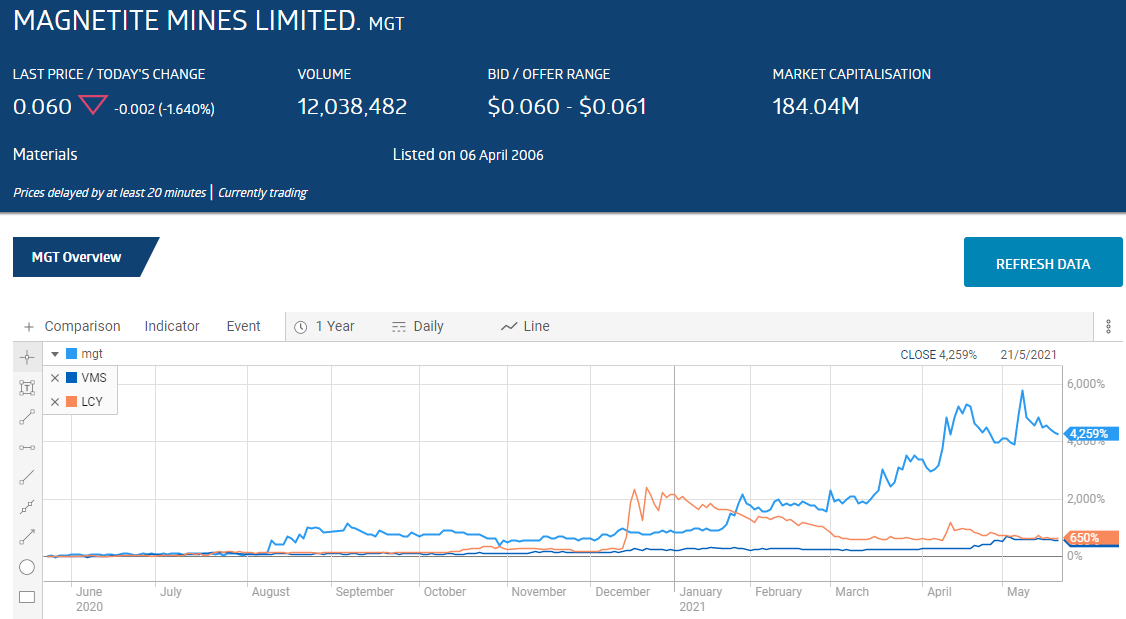 Mining iron ore is a process of extracting and purifying iron ore minerals from rock deposits. In fact, iron ore is a mineral found in sedimentary rocks. There are two major types of iron ore – magnetite and hematite.

Magnetite is purer and therefore the preferred form. Magnetite contains approximately 72 percent metallic iron in it while Hematite contains between 60% and 70%

Magnetite Mines (MGT) has its wholly owned flagship asset in South Australia – the Razorback Iron Ore Project. There are three main deposits in a project that spans 110 kilometres of underexplored territory with Razorback the primary target.

The 2012 JORC (the Australasian Code for Reporting of Exploration Results, Mineral Resources and Ore Reserves) inferred to indicated resource estimate for Razorback and the accompanying deposits at Iron Peak and Ironback Hill stands at 3,900 billion tonnes.

The company has already invested $35 million in the project with a positive pre-feasibility study (PFS) underway and 52,000 metres of drilling completed.

The PFS is expected to be fully completed and released in Q2 of 2021, at which time the company could make a “go forward” decision.

A string of positive news since late March accelerated the climb in share price, with the latest news of a $7 million dollar institutional and sophisticated investor placement pleasing investors, another positive sign of investor sentiment.

Earlier shareholders learned that the Department for Energy and Mines in South Australia had awarded Magnetite Mines the tenement package (mining license and lease) for another prospect in the area – the Muster Dam Iron Ore Project.

Venture Minerals (VMS) is a diversified mining exploration company with the wholly owned Mount Lindsay Tin-Tungsten Project in Tasmania, and five projects In Western Australia, –a zinc/copper/gold project; a nickel/gold/copper project; a nickel/cobalt/copper project, a base and precious metals project, and a lithium project. Four of the five appear to be wholly owned while Venture has the rights to acquire 90% of the Caesar Nickel/Copper Project.

Long term the company is targeting metals and minerals needed to fuel the lithium-ion battery market. Venture also has one active iron ore project in Tasmania and another in early development.

The Mt Riley Iron Ore Project has been funded by a recent institutional placement and Venture anticipates the commissioning of the Wet Screening Plant, where construction is nearly complete, sometime in May of 2021 with the first shipments of iron ore from hematite expected in Q2 of 2021.

Venture is positioning itself to benefit in the near term from the rising price of iron ore while still actively pursuing its mining assets that stand to benefit from the battery sector. Lithium, cobalt, nickel, and tin are all needed for li-ion batteries.

Legacy Iron Ore (LCY) is another diversified mining company with projects in development in gold, manganese, base metals, and iron ore.

While the Legacy website claims Legacy’s defined major iron ore resource at Mt Bevan in Western Australia “will continue to be a major focus of the company’s activities,” recent market announcements seem to indicate Legacy its sharpening its focus on the Mt Celia Gold Project.

The Mt Bevin Project is a joint venture with ASX listed Hawthorn Resources (HAW) with Legacy anticipating increasing its interest to a controlling 60% upon completion of a pre-feasibility study. The Mt Bevin Project is said to hold “excellent potential for the definition of substantial DSO hematite and magnetite iron resources that are located close to existing road, rail and port facilities.”

The resource estimate for Mt Celia was recently updated and the latest Legacy Quarterly Activity Report indicated multiple exploration activities underway. The company remains committed to its multi-stage, multi-target development strategy, according to the latest report:

There are four junior/mid-cap miners with iron ore assets with share price appreciation in excess of 350% year over year.

The following table includes share price and balance sheet metrics for the four. 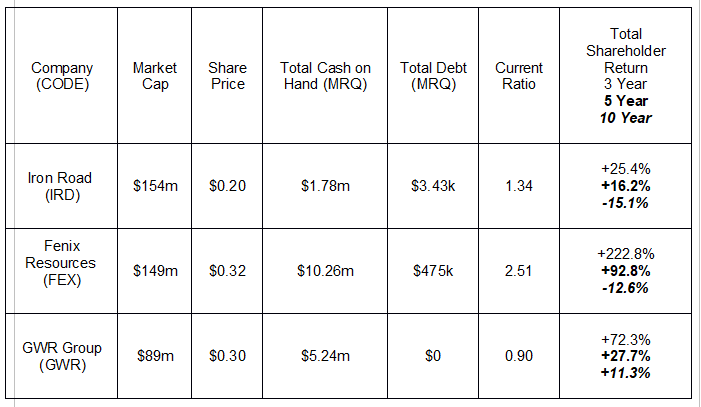 Iron Road (IRD) is a pure-play iron ore explorer/developer with its wholly owned Central Eyre Iron Project in South Australia consisting of three magnetite iron occurrences (Warramboo, Kopi & Hambidge.) The company has a smaller project – the Gawler Iron Ore Project – in early development. Although the company completed a DFS on the Central Eyre Project in 2014, the construction of needed infrastructure to Cape Hardy remains underway.

Fenix Resources (FEX) has made the leap from explorer to producer at its South Australia Iron Ridge Iron Ore Project, with its maiden shipment in early February. By early March, the company had hauled 28,653 WMT (wet metric tonnes) to port for shipping, putting Fenex on track to exceed 1.25 metric tonnes per annum. Fenix can now ship two bulk shipments per month of about 60,000 WMT going forward.

On 28 April, the company announced a Joint Venture (JV) with ASX listed Scorpion Minerals (SCN) to develop Scorpion’s Pharos Iron Ore Project in the vicinity of Iron Ridge. Fenix the option to gain 70% of the iron ore rights from the project.

GWR Resources (GWR) began shipping iron ore from its Wiluna West Iron Ore Project on 9 February, with two more shipments made by 2 May. The company also has gold and tungsten projects in development, with plans to spin off its Wiluna West Gold Project into a wholly owned subsidiary – Wester Gold Resources – via an IPO.

Retail investors are making a big bet on these companies with a minimal production track record and no record at all of ongoing and consistent production. Yet their share price increases dwarf the performance of two long time experienced iron ore miners on the ASX – BC Iron (BCI) and Mt Gibson Iron (MGX). 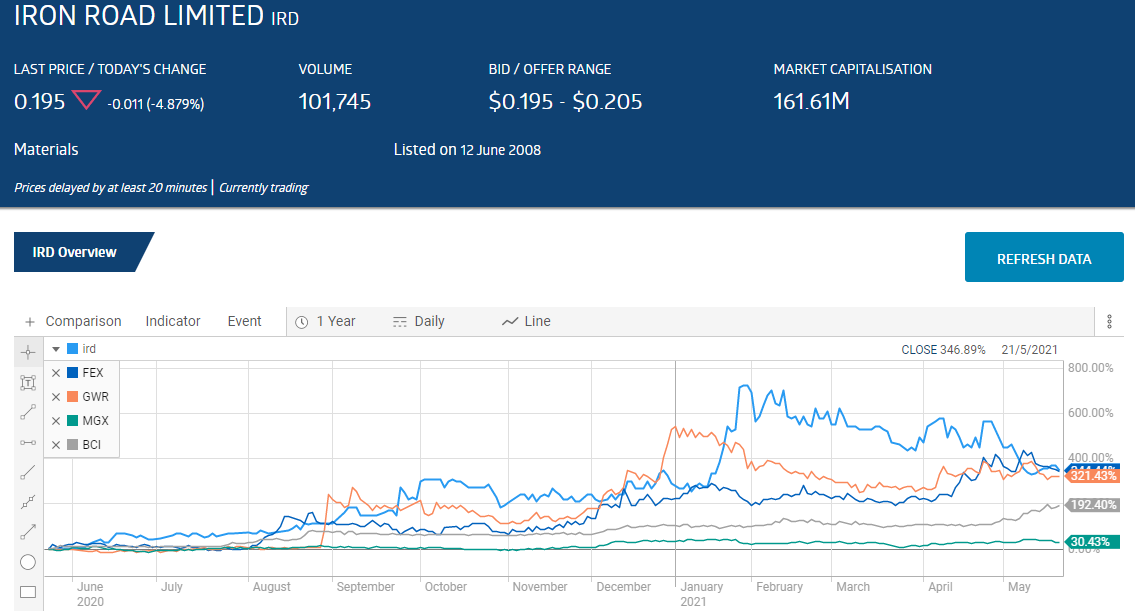