On occasion market experts have anointed wild swings in market volatility as a market with a “split personality.” It would be hard to argue that market movements since the potential scope of the COVID-19 Pandemic began to become obvious in mid to late February of 2020 has been anything but volatile.

On 19 February markets began a decent that would earn the dubious title of fastest 30% decline into Bear market territory in history. In 65 days since hitting bottom, the world’s most respected market among the global investment community – the US S & P 500 Index – saw the fastest recovery from a Bear market in history, rising about 41%.

The “split personality” rears its head on worries over the interconnected concerns we are facing – the spread of COVID-19 and the timing and strength of an economic recovery. What has been especially puzzling is the market reaction to positive and negative news on both issues. Markets drop on some bad economic news and rise on other bad news that appears not as bad as it could be. The same could be said of positive and negative news about COVID-19, with markets rising on the hints of potential treatments and the availability of a vaccine as well as on the appearance the spread is beginning to come under control.

We now find ourselves in another downtrend, stemming from not so good news about COVID-19. In truth, new cases never stopped; they just declined. Now parts of the US are rising dangerously, with the same occurring here in Australia in Victoria.

On 25 June investors in US yet again contributed to the split personality market argument as US markets shrugged off bad news on both fronts – new cases of COVID-19 in the US hit levels not seen since April and US unemployment claims came in again worse than expected. 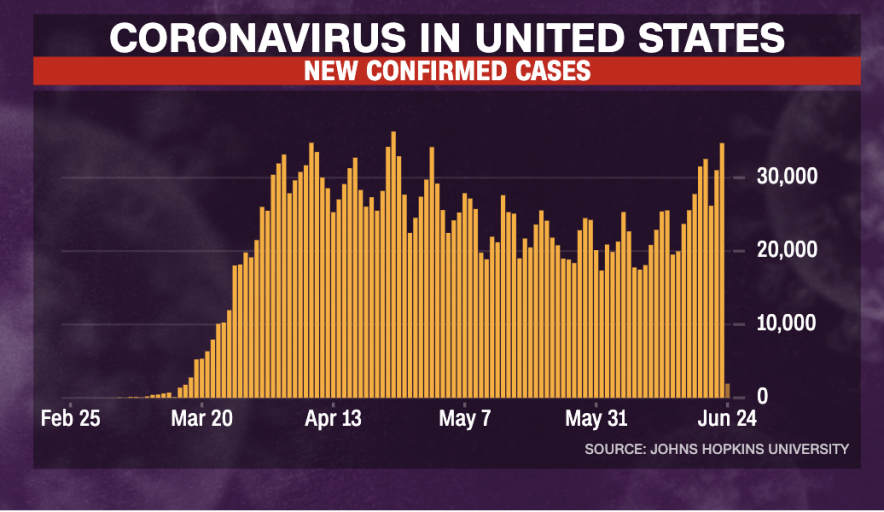 The Dow Jones Industrial Average (DJIA) closed up 299.66 points, reversing losses earlier in the day on news out of the US Federal Reserve rolling back bank regulations. As has been typical of many moves ignoring earlier bad news, investors focused on the positives of the announcement – the big banks can free up more capital, allowing them to withstand expected bad debt write offs. Ignored was the expectation of increases in bad debts. The ASX 200 followed the euphoric lead out of the US on the positive side of the bank news there, closing the week up 1.5%. The DJIA soured at the end of the week, closing on the last day of trading down 730 points, or 2.8%.

All this is good news for gold, and the price action over the last week reflects that. On 23 June in the US the price of gold hit a mark not seen in seven years – USD$1,768 per ounce. There are a variety of reasons for the rise in the gold price, but key among them is rising risks to the global economy. One market concern regarding the US economy has morphed from speculation to reality – some US states are pausing their reopening plans, most notably Texas, with the second largest population in that country, and now Florida. Markets eagerly anticipating an economic recovery spurred by swift reopening of shuttered businesses were disappointed, to say the least.

The International Monetary Fund (IMF) has grown increasingly pessimistic about the economic impact of COVID-19, lowering its prior growth forecast for the year of a decline of 3% more than a point, down to a drop of 4.3%

In addition, gold analysts at Goldman Sachs, Citibank, and Morgan Stanley all are expecting to the price of gold to eclipse USD$2,000 per ounce by 2021.

The gold rally took a stutter step as the month of June drew to a close, but closed the last few days of trading on an uptrend. 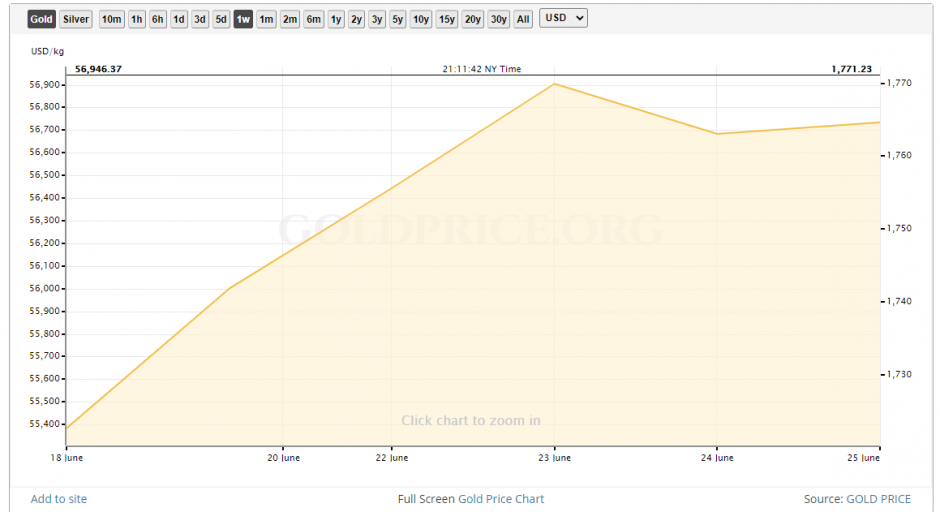 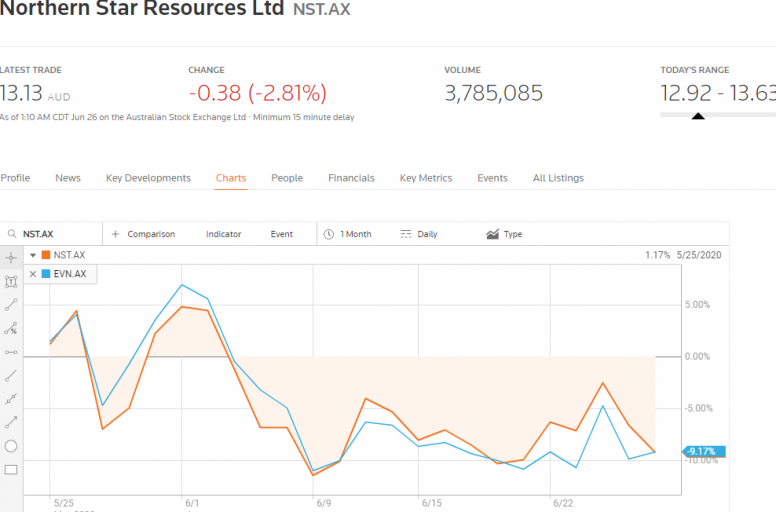 Despite their outstanding metrics, these two ASX stalwarts may not satisfy investors looking to “shoot for the moon” with investments that could deliver triple and even quadruple gains over time. There are junior gold mining stocks in exploration mode that could let high risk tolerant investors scratch that itch.Exploration stocks can see wild share price appreciation with each announcement of positive drilling results. Although capital infusions, exploration leases, and asset acquisitions qualify as positive movement for a gold explorer, nothing gets the hearts of avid investors beating like drilling results expanding the size and/or quality of the resource base.

The first is Metalcity Limited (MCL), a penny stock trading at a 52-week high of $0.03 with a market cap of $42 million dollars. The share price exploded upward by 123% in a single day when the company emerged from a trading halt with an announcement of “spectacular high-grade results” at the company’s Kookynie Gold Project in the eastern goldfields of Western Australia.

In its FY 2019 Annual Report Metalcity announced a strategic review of its existing mineral project operations resulting in the acquisition of key gold projects and a shift from its prior focus on zinc projects to gold. In May of 2019, the company reached a farm-in agreement with Nex Metals (NME) for the Kookynie and Yundamindra Gold Projects, wholly owned by Nex Metals. The agreement called for Metalcity to absorb drilling expenditures up to $500,000 dollars at which time a Joint Venture between the two companies would come into play, with Metalcity holding a 51% interest.

The share price of both companies shot up on the news. 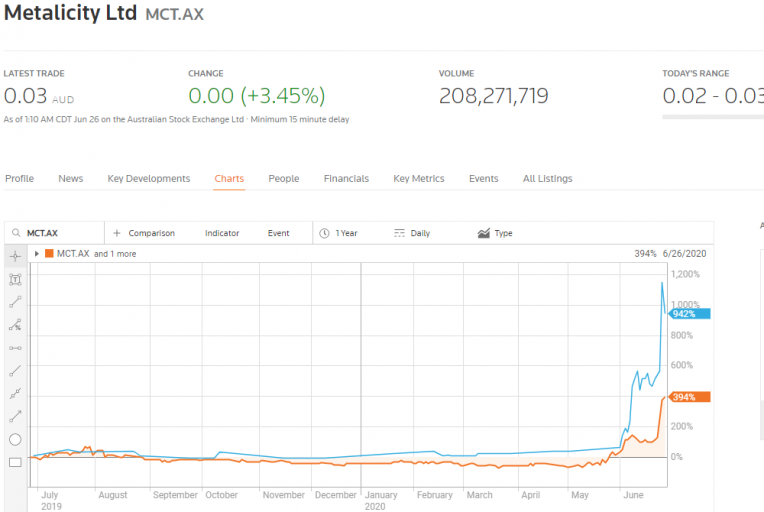 The Kookynie Project was actively mined from 1895 to 1922 at four mining centres – McTavish, Champion, Altona, and Leipold. Initial exploratory estimates were positive, leading to the extraordinarily successful drilling program results released days ago from 11 out of 44 holes to be drilled. Results from the remaining 33 are expected “in the coming weeks.”

Metalcity management claims “with every drill hole completed we continue to illustrate that the Kookynie Gold Project has the potential to be a prolific gold area. The results are very shallow, which if converted to resources and reserves could be potentially open pittable.”

Rox Resources (RXL) is another junior ASX exploration company shifting its focus, from nickel to gold. In April of 2019, the company announced a self-described “transformational deal” with an initial 50% joint venture with Venus Metals (VMC) to “aggressively explore” the historic Younami gold mine in Western Australia, assuming management of the project. Venus has interests in battery metals, lithium, and vanadium. With the price of gold hovering around $400 per ounce, operations at Younami closed in 1997.

Rox began drilling at Younami on 1 August of 2019, with the first in a series of positive drilling results released on 9 September. On 20 September, the company completed a successful capital raise to accelerate the drilling program, with the “best results to date” released on 24 September.

The positive news rolled on, with Rox announcing an increase in its stake in the JV to 70% followed by an over-subscribed capital raise. The latest update on 16 June showed high grade assay results with the company aggressively continuing its drilling program.

The JV has benefited both companies, with Rox beginning its meteoric rise following the announcement of a deal that did turn out to be transformational. From auyahoofinance.com: 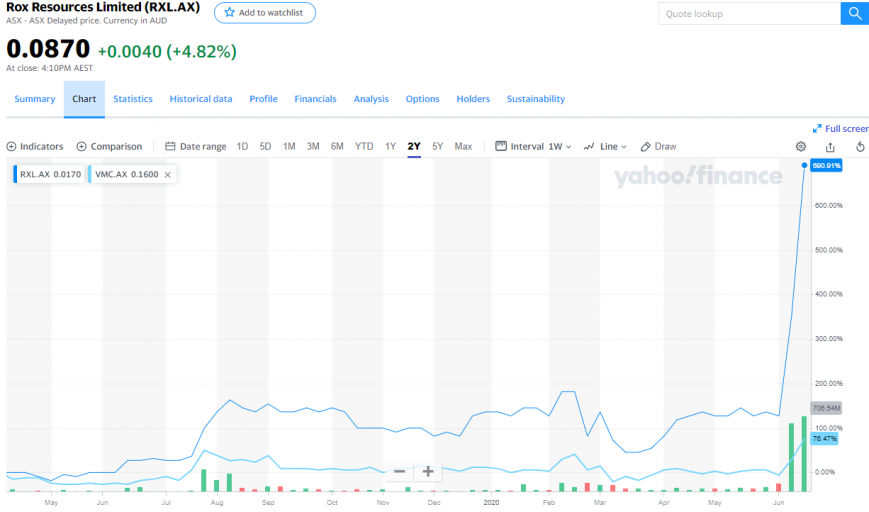 Kalamazoo Resources (KZR) followed a different path to reach its year over year share price appreciation of 467% — aggressive acquisitions. In April of 2018, the company announced the acquisition of three “highly prospective” gold projects in the Pilbara region of Western Australia —the DOM’s Hill, Sisters and Marble Bar gold projects.

On 20 June Kalamazoo announced it had received an Exploration Licence for two gold projects in Victoria — Wattle Gully Gold Project and the surrounding Castlemaine Goldfield.

Castlemaine was once a major gold producing mine, limited now to minor exploration activities. Kalamazoo states Castlemaine remains “one of the richest gold fields in Australia”, untouched by modern exploration techniques.

The most recent acquisition came on 23 June when Kalamazoo acquired the Ashburton Gold Mine from Northern Star Resources, with a production history of 350,000 oz. of gold. The share price jumped from $0.49 per share to $0.68 at the close following the announcement, a 38% increase, and shortly thereafter reached an all-time high of $0.78. The share price has cooled a bit, closing on 26 June at $0.72

On occasion market experts have anointed wild swings in market …