Is It Time to Buy Iron Ore Miners?

In February of 2011, the price of iron ore hit an all-time high of USD$187 dmt (dry metric tonne). Fueling the price explosion was the multi-year campaign by the Chinese government to modernise the country. Expanding a country’s industrial production capacity and creating urban areas to house needed employees requires massive infrastructure development, from roads, bridges, and airports to residential, commercial, and industrial building complexes. All of that requires massive amounts of steel, which in turn requires massive amounts of iron ore to create the steel.

In 2013, the price went into a slow but steady decline before hitting an all-time low of USD$40 dmt in December of 2015. With the first evidence of trouble prognosticators here began to predict the “death of the mining boom.”

Analysts and experts attributed the fall to two factors. First, the China property market slowed and the government there cracked down on the country’s extensive “shadow banking system” where credit starved businesses and commodity traders amass iron ore inventories to use as collateral.

This excess inventory coupled with the ramp up of iron ore production around the world created the classic “supply glut” overwhelming slowing demand. In the first half of 2021 the price of iron ore had recovered, hitting another all-time high of USD$200 dmt in July, before collapsing in the second half of the year.

Iron ore miners had a down year in 2021, with BHP’s share price falling 2% along with Rio’s drop of 12% and Fortescue’s 18%, as China cut back steel production to reduce carbon emissions. Iron ore got to a good start in 2022. Then the Omicron variant of COVID 19 began to spread across China in March, with the government cracking down with its “Zero Covid” policy.”

From the website of the US Federal Reserve Bank of St. Louis, the following chart tracks the price of iron ore from 1990 to the steep decline going into the end of 2021.

The next chart from marketsbusinessinsider.com shows the positive start, the initial dip once the news of the spread of Omicron in China hit the markets, and the subsequent volatility as positive and negative developments sparred for the attention of investors. 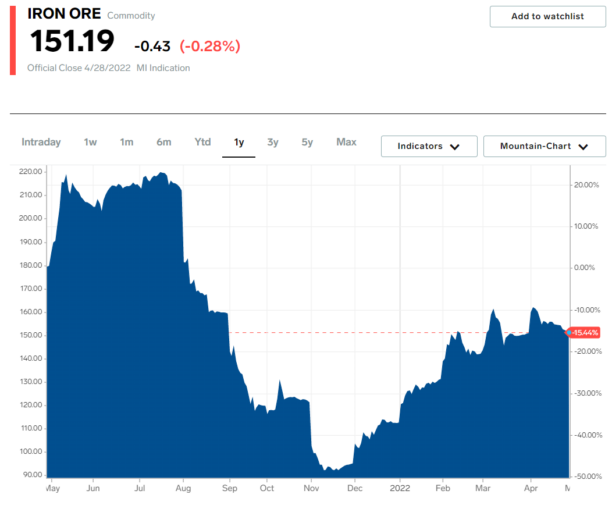 On Monday the 25th of April Bloomberg reported the drop in iron ore futures as market participants learned the Omicron variant had made its way to Beijing, while more areas in China could feel the impact of the stringent restrictions already in place in the financial sector of Shanghai.

Bloomberg business tweeted the deteriorating demand conditions in China could make the outlook for iron ore prices in the remainder of the year as bleak as the current “tailspin.”

On Tuesday the 26th of April mining.com noted the rebound in iron ore in response to the government of China’s promise of increased monetary support to rejuvenate the country’s economy.

A commodities analyst at Commonwealth Bank of Australia noted that Chinese policy makers would be aiming for a “soft landing” including increased infrastructure investments.

Energy research firm Capital Economics expressed a contrarian view that stimulating infrastructure investment in China would only provide a “floor” under existing prices.

Little wonder investors flirting with a bullish outlook of iron ore for the remainder of the year wonder whether the Chinese government will follow through on its promise. On 19 April China had a different message from the country’s state planner – steel production would continue to be cut in 2022.

The China Iron and Steel Association reported a 9.5% drop in steel consumption in Q1 but remained optimistic demand would recover in the second half of the year.

What is the ordinary retail investor to make of this seemingly contradictory information?

Some analysts have remarked the price drops are a “short-term” phenomenon. The 1990 through 2021 price chart from the St. Louis Federal Reserve Bank above does show that over the longer term, the price of iron ore does snap back.

The historical performance of the top five ASX iron ore miners makes an argument for buying these stocks on dips such as what we are currently seeing. Mineral Resources (MIN) and Champion Iron (CIA) are the fourth and fifth by market cap. 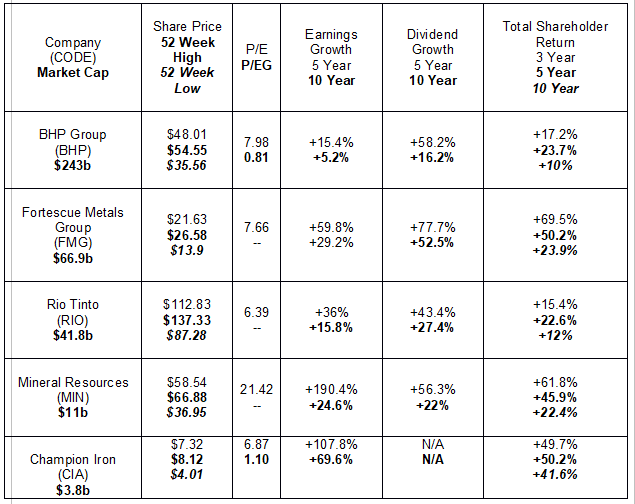 A case could be made for investing in any of these five companies, depending on an individual investor’s risk tolerance and investing philosophy.

Risk averse investors should be attracted by BHP’s extensive diversification in the assets it holds.

The company began operating at Broken Hill in New South Wales 1885 as a diversified miner. Today the company’s asset portfolio has changed but remains highly diversified. Investors fretting over the uncertain outlook for iron ore should know BHP only derives 57% of its revenue from iron ore. The company recently merged its oil and gas assets with Woodside Petroleum (WPL) and is shedding its thermal coal assets to perhaps gain traction with the growing number of ESG (environmental, social, and governance) investors.

The company is also a major copper producer along with nickel assets and has prospective Jansen Potash Project in Canada., which when completed will be the largest potash mine in the world. BHP is maintaining its metallurgical coal assets used in steel production.

For value investors, BHP has a P/E substantially lower than the sector average of 12.63 and an attractive P/EG ratio under one. The Price to Earnings Ratio is the favorite of many investors, but it is backward looking, using historical earnings in its calculation.

The Price to Earnings Growth Ratio uses forward looking earnings estimates in its calculation. BHP’s earnings reported in FY 2021 came in at $4.48 per share and is forecasted to increase to $6.33 in FY 2022 before falling to $5.41 in FY 2023. The company has a diversified global footprint and is actively seeking to increase its production of copper and nickel, both metals vital to the EV (electric vehicle) market.

Investors with high risk tolerance tend to gravitate towards “pure play” operators as the rewards when the “play” can be substantially higher in good times than the rewards from a diversified player where weaker operating segments drag down the returns of the hotter sector.

Fortescue Metals and Champion Iron are both pure play iron ore miners, for now. Fortescue has grown both revenue and profit in each of the last three fiscal years. The company is looking to diversify into the green energy sector with the creation of a wholly owned subsidiary company, Fortescue Future Industries (FFI). FFI plans to produce fifteen million tonnes per year of a zero emission fuel – green hydrogen – by 2030, ramping up to fifty million tonnes by 2040.

Champion Iron is the only one of the five miners to show double digit share price appreciation — +34% — year to date. The company’s Fiscal Year ends in March. Its Full Year 2021 financials included the bulk of the downturn in the price of iron ore in the second half of calendar year 2021. Despite the timing, Champion reported revenue growth increased 49% while profit was up 374%.

The company has two iron ore projects in the province of Quebec in Canada, with its flagship at Bloom Lake along with the Fire Lake Project. While Fortescue and Mineral Resources use high volume exporting to derive maximum revenue from their lower grade iron ore, Champion’s ore is of a higher grade than Rio or BHP. The company is nearing completion of an expansion of the Bloom Lake Operation and acquired another high grade iron ore asset near the maritime province of Newfoundland, with a feasibility study underway. The Bloom Lake Expansion Project will double the mine’s capacity.

The company gets 65% of its power from renewable sources and has a decided advantage over many of its competitors in a carbon-conscious world. The higher the purity of the iron ore used in producing steel, the lower the emissions. Market experts claim the company’s industry leading purity of its iron ore will increase demand in the future. Champion is embarking on studies to determine if it can squeeze out more impurities, aiming for 69% FE Content. FE is the chemical symbol for iron. Ore extracted from mining operations come with impurities from other elements mixed with the iron. Pure hematite iron ore contains about 69.9% FE.

While BHP’s earnings per share (EPS) are expected to dip in FY 2023 with both Fortescue and Rio having forecasted EPS declines for FY 2022 extending into FY 2023, Champion alone is expected to see consistent EPS growth.

Rio gets 80% of its revenue from iron ore, although the company mines other commodities including copper, gold, aluminum, uranium, and diamonds. In an effort to gain entry into the EV market Rio is expanding into lithium. The company has an agreement to buy the Rincon Lithium Project in Argentina, but its Serbian lithium project was closed down by the Serbian government.

Mineral Resources mines low grade iron ore and operates a mining service business. The company also has two lithium projects in Western Australia, both Joint Ventures. The company has a 40% interest in the Wodgina Project, which began the process of restarting operations in October of 2021 with US based Albemarle , and the Mount Marion Project with China based lith8ium producer Jiangxi Ganfeng Lithium Co. Ltd. The Mount Marion Project is a 50/50 JV and has plans to increase production. Wodgina is expected to begin producing in the September Quarter of 2022.

The company’s Half Year 2022 financial results saw declines in both revenues and profit, attributed to high operating and expansion expenses and the lower price of ore. Mineral Resources sold its ore at steep discounts due to its lower grade in a market with soft pricing even for higher grades.

While revenues declined only 12%, earnings before interest, taxes, depreciation, and amortisation (EBITDA) fell 80% and statutory net profit dropped 96%. For investors that follow analyst recommendations, global investment bank Goldman Sachs reacted to a positive Q3 update from the company by reiterating its BUY rating and raised its price target to $73.80.

Is It Time to Buy Iron Ore Miners?