Is Construction and Infrastructure Spending Coming?

Early in the first trading week of June the ASX 200 rallied yet again to hit its highest close since the 6th of March, with the 3 June closing at 5,941.6, up 1.83% from the previous day. The following day our market hit a new 13 week high.

Investors appear eager to accept the positive, grabbing on to the “it could have been worse” mantra when confronted with the news we are likely to enter our first recession in three decades, with GDP for the March Quarter falling by 0.3%. What investors are discounting is time period of the reading according the Australian Associated Press —official figures that mostly predate the economic damage from the COVID-19 lockdowns.

US investors followed suit on 3 June there, fixating on the much better than expected unemployment numbers for May reported not from the US government, but from private firms ADP and Moody’s Analytics. Given the huge disparity between what was expected – a loss of 8.75 million jobs – and what was reported – a loss of 2.76 million – some economists cautioned investors to “brace for surprises.” At the end of the week everyone was shocked by data not a single economist had predicted – US employment added 2.5 million jobs in the latest report from their Department of Labor.

Here in Australia a new worry has been added to the wall constructed by skeptics of this market rally – what happens when government stimulus measures fade away at the end of September. A 25 May article appearing in the Guardian Australia calls this worry “the cliff that looms in September.”

The Federal Government is expected to expand stimulus measures, targeting sectors of the economy, with the first likely to be assistance for the housing sector followed by large scale construction and infrastructure projects.

Seven Group Holdings, a diversified investment group with operations in mining, media, and construction, surprised the market with its 10% acquisition of building products provider Boral Limited (BRL). The move is being interpreted as a way for Seven Group to cash in on the hoped for increase in construction and infrastructure spending.

Aussie investors looking to follow the lead of the billionaire behind Seven Group, have a range of ASX companies from which to choose, with some less risky than others.

Investors who followed the evolution of Liquefied Natural Gas (LNG) here in Australia saw the major risks with massive construction projects like these – project delays and cost overruns.

Within the broad category of infrastructure and construction projects there are three subsets of companies operating in that sector:

While all three compete to win contracts, project builders have a significant disadvantage stemming from the limited number of major projects they can manage. In addition, they are the businesses suffering the most from cost overruns and project delays.

The nature of providing engineering and consulting services along with project and construction management for a project opens the door to a larger client base for the major firms.

At least risk are the providers of building materials since all projects require materials. It is hard to imagine major construction projects that do not require cement, making Australia’s major cement manufacturers arguably the safest plays in the sector. The two major players on the ASX – Boral Limited (BLD) and ADBRI Limited (ABC) – slumped as the impact of the COVID-19 pandemic began to become apparent but have rallied along with the rest of the ASX over the last month. ADBRI is the new name for the more familiar Adelaide Brighton as of 19 May of 2020. From the Reuters financial website: 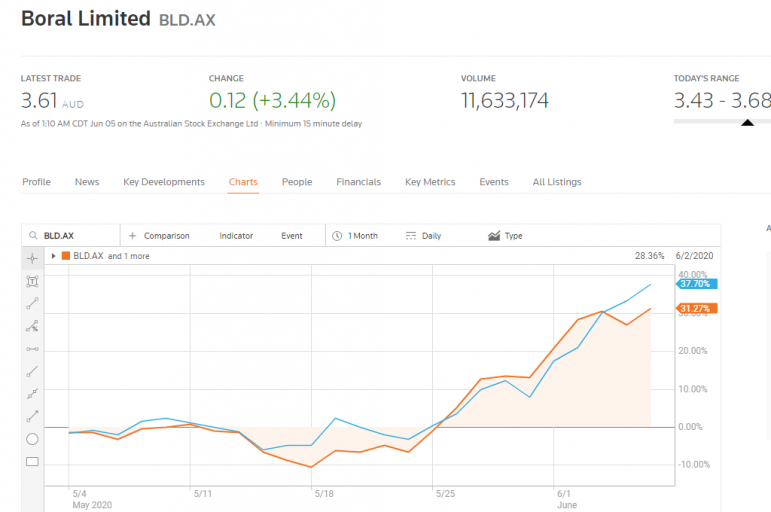 Water is the most consumed material in the world, followed by concrete made from cement. Cement is everywhere – in roads, bridges, tunnels, buildings, and public spaces. ADBRI may be our largest supplier of cement, but Boral is more diversified, offering other building materials used in residential construction, a target of more government stimulus measures.

Perhaps for that reason, Boral has outperformed 19.2%in both earnings and dividend growth.

At this point there is no certainty about the size and target of any government stimulus, but large-scale building projects suit ADBRI’s strengths. In 2019 the company generated $1.52 billion dollars from its 44 quarries, 95 cement plants and 16 cement and lime depots across Australia along with its concrete bricks, blocks, pavers, retaining walls, erosion control products, architectural masonry, and reconstituted stone veneers. However, the revenue was down 7% due to “challenging conditions in both residential and civil construction.” Underlying profit fell 35.6% after two straight years of gains, falling from $185 million to $123 million.

Management reassured investors its combined total of $450 million in cash and debt facilities will allow ADBRI to weather the storm.

Like ADBRI, Boral limited (BLD) reached all-time highs in 2018 before the fall. 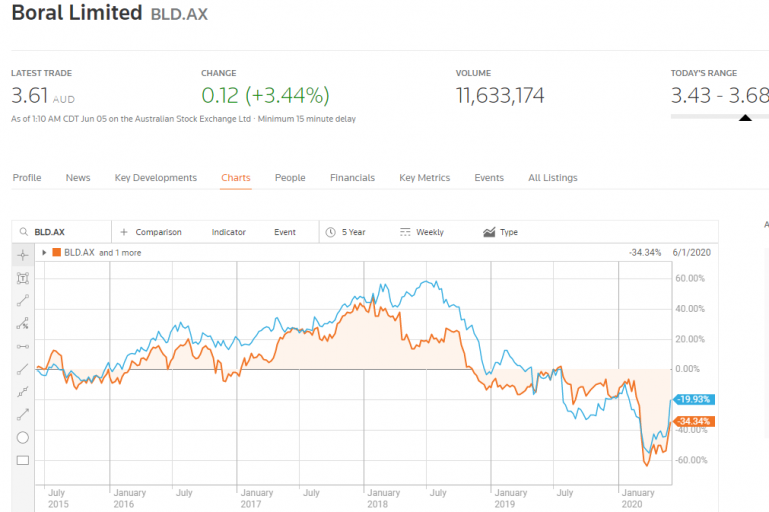 The Boral share price has gotten a boost from takeover speculation following the recent share acquisition from Seven West Group. Market commentators and analysts alike have been casting a wary eye at Boral management, with the exit of the company’s CEO in February reportedly due to an accounting scandal leaving the company virtually “leaderless.”

The company has three operating divisions, with its two US operations – USG Boral and Boral North America – hit hard by the COVID-19 Pandemic there. Boral Australia makes a variety of construction materials for residential, commercial, and infrastructure projects, including concrete, quarry products, asphalt, cement, roof tiles, timber, and masonry.

Boral’s Half Year 2019 Financial Results reported in February were less than spectacular, with a 2% revenue increase and an 18% drop in net profit after tax (NPAT.) In March, the company withdrew its Full Year 2020 Guidance.

Both companies operate globally as virtual images of each other, but there are differences in the sectors they serve. Both offer “concept to completion” project and construction management services, without taking on the burdens of project construction. Worley serves the hydrocarbon, minerals, metals, and chemical sectors while Lycopodium serves renewable energy and agriculture along with infrastructure.

Lycopodium’s Half Year 2020 Financial Results were beyond respectable, given the tailwinds in the sector in 2019. Revenues were up 51.1% and NPAT was up 4.6%.

On 25 March Lycopodium withdrew its guidance for NPAT of $14.1 million and $220 million in revenue, citing the impact of COVID-19 on the sector. Unlike many other ASX companies, on 29 May the company issued revised guidance of $11.5 million in NPAT.

The company has a 40% interest in a joint venture with Monadelphous Group (MND) in an engineering, procuring, and construction (EPC) entity called Mondium, targeting the minerals processing sector. The idea is to combine the construction expertise from Monadelphous with the technical engineering expertise from Lycopodium. In early January Mondium was awarded a $400 million dollar with Rio Tinto for the design and construction of mineral processing facilities and related infrastructure in the Pilbara mining region of Western Australia.

Worley’s share price was in decline following the resignation of the company’s CEO, with investors and analysts alike speculating about disappointing Half Year 2020 Financial Results to be released three weeks after the surprising announcement of the management change. They were wrong to worry.

Analysts have a BUY rating on Worley and Boral; a HOLD on ADBRI; and Lycopodium has no major analyst coverage yet.

Is Construction and Infrastructure Spending Coming?

Early in the first trading week of June the ASX …