In Search of the Next Afterpay

Back in 2015 a new fintech (financial technology) startup launched a payment platform that would disrupt existing forms of consumer payments. The company was Afterpay and the platform allowing consumers to “buy now and pay later” led to the now ubiquitous acronym BNPL.

Following its success in the Australian market the company launched in the US in 2018, further propelling the company’s market darling status. Astute investors were keenly aware of the gap between BNPL usage here in Australia and in the US, where “rewards” credit cards were popular. BNPL providers flooded the US market and usage there is up

The Ascent, a personal finance service reviewer from The Motley Fool conducted two surveys of US consumers on their BNPL habits: the first in July of 2020 and the second in March of 2021. The March survey showed 55.8% of consumers had used a BNPL service, up from 37.65% in July of 2020 — an increase of almost 50% in less than nine months.

Afterpay has been so successful in the US market the company is considering switching its primary listing to the US NASDAQ index. Afterpay currently trades in the US on the over the counter (OTC) market.

There is a parallel between the dichotomy between BNPL adoption in Australia and the US – sports betting.

Prior to 2018 the state of Nevada was the only place US residents could bet on their favorite professional sports teams. In contrast, sports betting in Australia was legalised in 1980, with legalised betting at the horse tracks dating back to 1810. The first online bookmaker appeared in Australia around 1996 with the Interactive Gambling Act of 2001 adopted to establish some regulations for the explosion of online sports betting sites.

In the US, a federal law — PASPA (the Professional and Amateur Sports Protection Act) passed in 1992 effectively banned betting on professional sports. Rabid sports fans were limited to bookmakers in Las Vegas, Nevada to take their chances. In 2018, the US Supreme Court overturned that law, opening the door for individual states to decide whether or not to allow sports betting and in what form.

An article appearing in variety.com in May of 2019 included a pictogram outlining the status of legalised sports betting in each of the 50 US states. 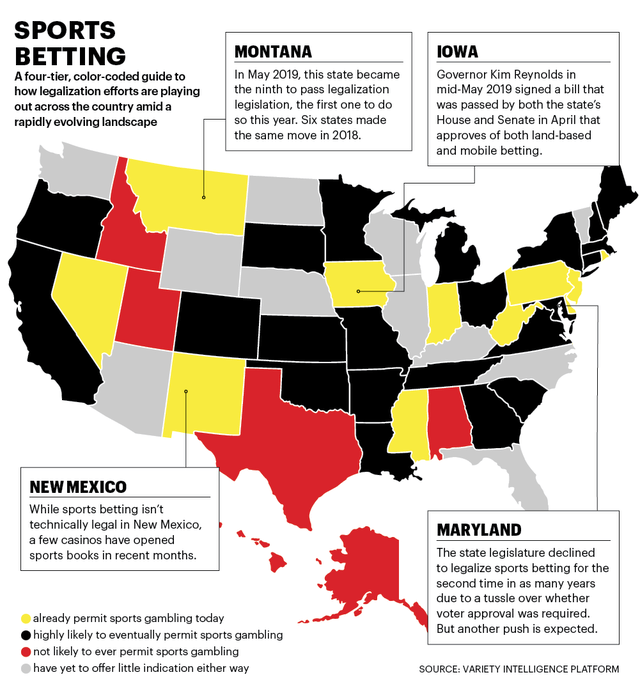 By May of 2021 the number of states doubled, from 11 to 22, with an additional 8 states passing laws in waiting, according to the following pictogram appearing in a 7 April of 2021 article appearing on the US edition of espn.com. 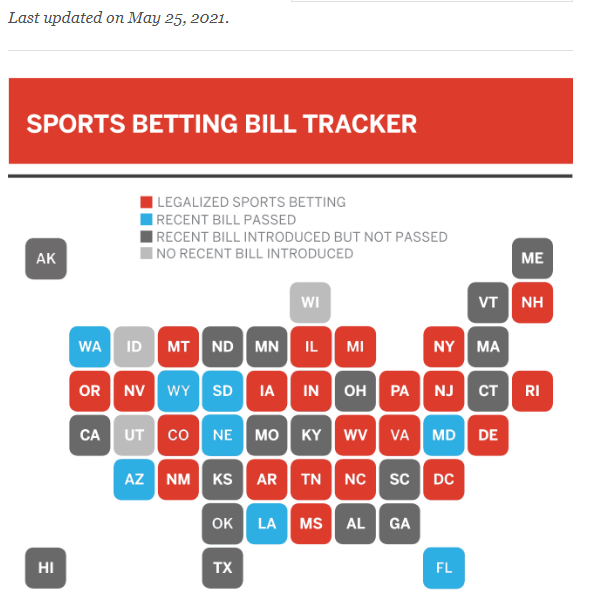 In addition to the massive potential in the US market, the options attracting bettors extend far beyond simple fixed odds betting on the outcome of a sporting event. Typically such bets must be made prior to the start of the event, but “live” or “in-play” betting allows bets during the game with the payout odds adjusted to reflect the state of the game at the time of the bet.

Another wrinkle gathering the attention of global investment behemoth JP Morgan is micro-betting. Micro-betting is a wager on the outcome of a specific event during a game, such as whether a field goal in American football will be successful or the call on the next pitch in a baseball game. In contrast to sports like soccer and rugby with no timeouts within a half of play, US sports have multiple pauses in play.

An analyst at JP Morgan has a forecast for the US sports betting market of USD$9.25 billion by 2025, with micro-betting potentially leading to a higher figure. Here is what the analyst had to say to JP Morgan clients:

The ASX has a wealth of gambling stocks, from high end casinos to lotteries to keno to the crown jewel of them all – horse racing.

There are two recent entries to the ASX targeting the US sports betting market, with both having a shot of becoming the “next Afterpay” – PointsBet Holdings (PBH) and BlueBet Holdings (BBT).

PointsBet listed on the ASX on 28 June of 2019, closing its first trading day at $2.20 and closed on 30 July of 2020 at $11.29, an increase of 413%. The company is expanding its existing presence in the US market aggressively. In March of 2021 the company announced a key acquisition to spur growth in live and micro betting when it acquired Banach Technology at a cost of $43 million dollars. Banach is a software developer of betting platform algorithms needed for live and micro betting.

In January of 2019 the company launched its proprietary iGaming sports betting platform in the state of New Jersey. PointsBet recently expanded its footprint in New Jersey with the launch on an online casino, featuring multiple gambling opportunities.

In May of 2021 the company launched the PointsBet Casino platform in the state of Michigan, adding to its existing presence in Pennsylvania, Indiana, Missouri, West Virginia, Illinois, Colorado, and Iowa. PointsBet has plans to launch both its online casino and sports wagering platforms in Louisiana, Mississippi, Arizona, Kansas, Maryland, Tennessee, and Ohio.

The company claims a competitive advantage via its developer/owner/operator status of its iGaming platforms, in contrast to some competitors that rely on third party entities.

PointsBet has a five year media partnership with NBC Universal in the United States as the Official Sports Betting partner for NBC Sports. NBC Sports boasts the largest sports audience in the US with more than 184 million viewers.

Revenues for the company jumped from $25 million in FY 2019 to $75 million in FY 2020, with capital expenditures to turbocharge growth leaving the company with a loss of about $40 million dollars in both FY 2019 and FY 2020. However, in what might be a preview of Full Year 2021 financial results, PointsBet recently reported stellar performance for Q4 of 2021 – turnover (total amount bet) increase of 63% here in Australia and 956% in the US. Active clients in Australia rose 117% and 661% in the US.

Proceeds from a successful capital raise will go towards marketing and client acquisition in the US and product and technology development.

The other contender for market darling status – BlueBet Holdings – listed on the ASX on 2 July of 2021, with its share price up 24% since listing.

Like PointsBet, BlueBet technology is proprietary and its business model out of the gate is “mobile fist”, although the company does maintain a wagering website as well. BlueBet has its eye squarely on the US market, with an initial strategy of targeting small US states before focusing on regional casinos as joint venture partners with minimal, if any, sports betting experience. BlueBet will provide its partners with the company’s Sportsbook as a Solution platform to allow the partnering entity to get into sports betting.

The company begins its life as a publicly traded entity in a rare position – it is already profitable with attractive growth metrics. The company has 92,000 registered users and saw revenues for the Half Year 2021 increase by 144%.

In Search of the Next Afterpay

Back in 2015 a new fintech (financial technology) startup launched …