In the aftermath of the GFC, a new financial sector emerged offering unsecured consumer lending for retail purchases, with minimal if any credit checks. What is more, the loans were interest free with repayments spaced out over time and low late payment fees. Would you have invested in the sector? The once unthinkable now is red hot, with BNPL providers popping up all over the world.

Although the COVID 19 Pandemic did not decimate consumer spending given the massive government financial assistance, it is interesting to note the stunning share price performance of the major ASX financial technology stocks ushering in the Buy Now Pay Later (BNPL) that went into overdrive with the pandemic. 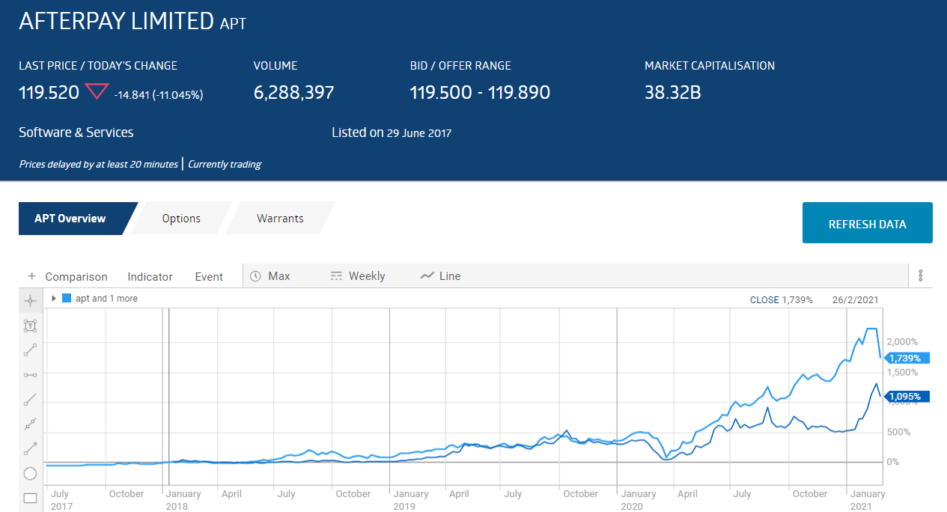 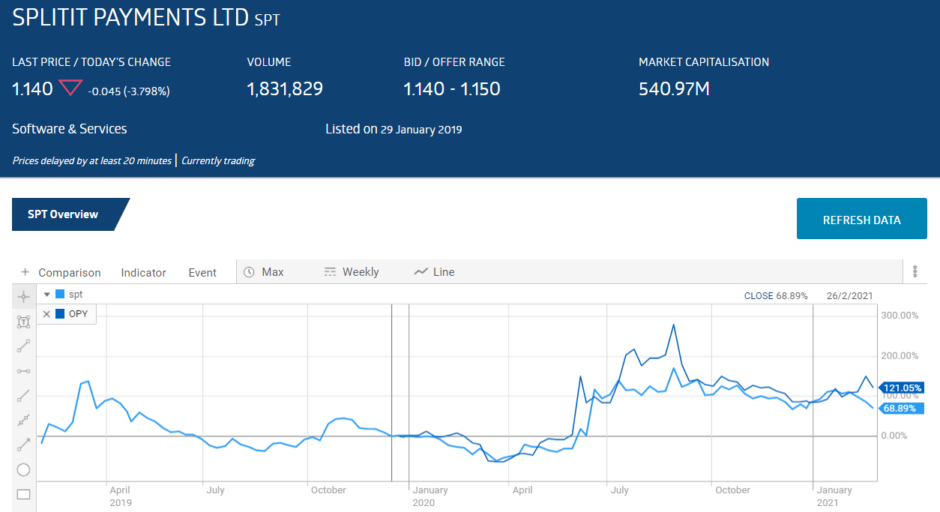 All skyrocketed as the pandemic took hold and have resumed their upward trend in the beginning of the 2021 trading year.

All follow the same basic business model with essentially minor differences. Each company offers online and brick and mortar consumer retailers a technology platform allowing the retailers customers to purchase goods without the use of a traditional credit card. Some consider the purchasing process a “win-win” for both parties, as in exchange for a transaction fee the retailers are paid immediately and released from potential bad debt burden from private label credit cards. Consumers get what they want with minimal, if any, credit requirements and no interest payments or fees provided they follow the BNPL platform’s repayment requirements.

In addition to that core business model and rising share price, all share another feature – none are profitable.

Investors have latched on to impressive revenue and transaction margin growth and rising numbers of active customers. All good signs, the experts tell us, that profitability is coming, but when?

Although investors remain onboard, prompting newcomers to enter the sector, some analysts are expressing caution, with comments like “my view is that Afterpay is effectively an unsecured lender with minimal credit checks and no capital,” from an analyst at Australia based Opal Capital Management.

A 25 August article appearing on the Reuters and Yahoo Finance websites previewing the expected fifth straight loss in the release of Full Year 2020 Financial Results from industry leader Afterpay has the following headline: A Buy now, profit later as investors go shopping for Australia’s Afterpay.

Others remain unabashedly optimistic. Analysts at Morgans and Goldman Sachs both predicted Afterpay would break the profit barrier in its Half Year 2021 Financial Results Report, with Morgans predicting a maiden net profit after tax (NPAT) of $5 million with Goldman forecasting NPAT of $17.4 million. Revenue forecasts were closer with Morgans at $473 million and Goldman at $440 million.

Eager investors got a double dose of disappointment with the 25 February announcement.

First the company announced a loss of $72.9 million dollars, eclipsing the 2020 Half Year result of a loss of $31.6 million dollars. Second, investors learned their existing shares faced dilution from a “AUD$1.25 billion unsecured zero coupon convertible notes due 2026, with an option to upsize the offering by up to $250 million.” fund increasing the company’s equity position in the US operations and other expansion efforts.

Overall the report followed the pattern of previous releases, with impressive gains in active merchants (+73%), active customers (+80%), and group income (+89%). Reported revenue of $417 million missed both the Morgans and the Goldman Forecast.

On the same day, the BNPL sector took another blow as the second ranked ASX BNPL provider – Zip Co – also reported another Half Year 2021 loss – a stunning $454 million dollars versus the 2019 Half Year loss of $30 million. Revenues grew 160%; active customers increased by 217%; and active merchants rose 82%. The company launched in the UK in 2020 and added a BNPL provider in the US – QuadPay.

Some major analysts remain bullish on these two stocks. Nervous investors drove down the stock price of both, perhaps in part to the declines in the tech sector in the US.

The bearish view on the BNPL sector begins with “excessive valuation.” This a term universally applied to high growth stocks with outsized potential. However, to reach the top costs money, delaying profitability. Both Afterpay and Zip Co are growing in the metrics that typically lead to profitability, but operational and marketing expenses are also growing.

Although there are competition concerns as major global players like PayPal and Visa jump into the sector, the total addressable market (TAM) appears large enough to accommodate multiple competitors although there is a finite number of merchants to sign up. 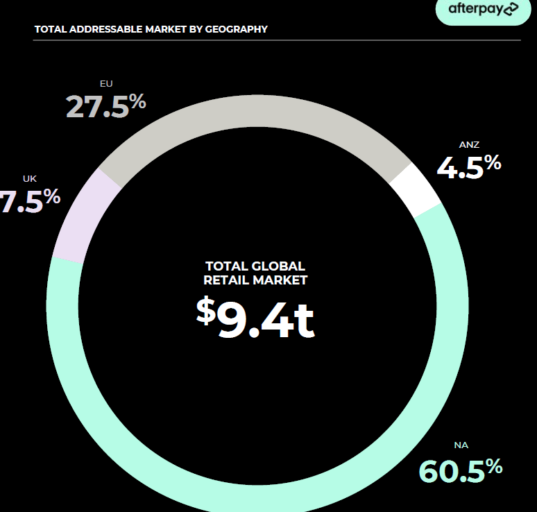 With all the hype about the growth of online retail sales, where most BNPL transactions occur, it is worth noting ecommerce sales still have a relatively small share of total sales, even in the US. 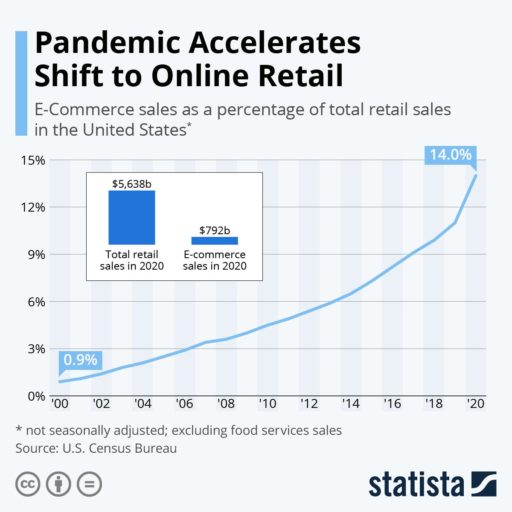 The Pandemic boosted the move online, but 86% of total sales are still in physical outlets, where BNPL providers have mammoth growth opportunities.

Some analysts point to the potential for regulatory intrusions should growing numbers of consumers burden themselves with payments they cannot make. The regulatory concerns have been addressed with a self-regulatory code of compliance now in place for Australian BNPL providers. Providers are signing on to a code of conduct constructed by the Australian Finance Industry Association (AFIA), compelling signatories to run external credit checks on new customers seeking to complete transactions of $2000 or more.

Much was made of the ASIC (Australian Securities and Investments Commission) findings that one in five Australians had missed a BNPL repayment, yet other evidence suggests some missed payments were not due to lack of funds, but due to mismanaging schedules with multiple payments due.

Bullish investors have been treated to a wealth of speculation that the BNPL craze is so disruptive it could lead to the demise of traditional credit cards.

For the skeptics or those without the patience to wait for profitability to kick in, there are new niche players coming on to the BNPL world.

Given the size of the big names, new entries focus on unserved markets, escaping some competitive disadvantage. Silicon Valley California based Zebit Inc. (ZBT) focuses on an unserved market – “financially and credit challenged” consumers, an untouched US market valued at more than $85 million dollars.

In November, the share price began to stir a bit as the company’s annual general meeting presentation highlighted outstanding financial results. Revenues were up 125% and NPAT was up 384%, with management advising that “COVID-19 related unemployment and the economic slowdown will massively increase demand for its services… for years to come.” In addition, management claimed the reported numbers did not yet reflect the anticipated longer term growth.

It was Credit Intelligence acquiring another Australia based business — YOZO Finance – that sent the share price upward on the announcement of its launch in Australia on 23 February. 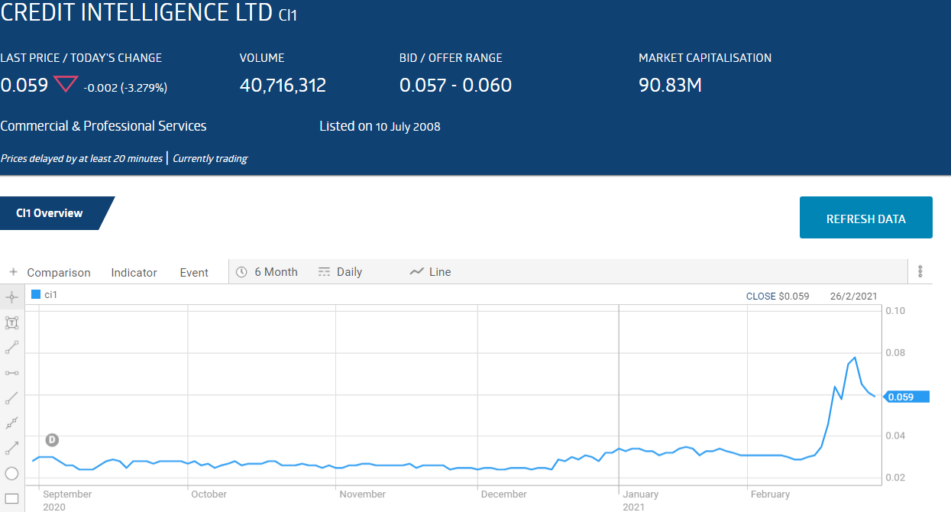 Half Year 2021 Financial Results for Credit Intelligence were strong, but the share price dropped, perhaps due to declines in the APT and Z1P share prices. The company reported a 21% increase in revenue and a 25% increase in net profit. Results were impacted by government support to SMEs, with the company anticipating more favorable conditions for their services once government support stops in March of 2021.

In the aftermath of the GFC, a new financial sector …