Diversified Financials in a Post-Pandemic World

“Investors Should Brace for another Market Sell-off, Analysts Warn”

That was the title of an 11 May article appearing in thenewdaily.com.au. Given the bullish tone of late in the ASX in particular and global markets in general, this appears a minority sentiment and an outright contrarian view.

Within the article lies a kernel of common sense that supports the more dismal view of what lies ahead. The viewpoint comes from the Director of Growth at tradingview.com, who said:

The closing comment is one all investors should consider:

Those adhering to the “positive talk” side of the debate got some encouraging news in the last week of May from findings in the weekly ANZ-Roy Morgan Consumer Confidence survey and spending data from the Commonwealth Bank of Australia.

Consumer confidence here in Australia has been on the rise for the past eight weeks, up 42% from the lowest level since 1973 recorded on 29 March. As evidence surveys like these sometimes report seemingly contradictory conclusions, consumer views of the future of their own personal finances were up 3.2% while sentiment on future economic conditions dropped 2.4%.

The “positive talk” continues with the CBA statistics on credit and debit card spending for the week ending 22 May, with spending up 3.9% year over year. Brick and mortar retail spending was up 0.6% and spending online was up 12.7%.

The overarching theme of “positive talk” can be boiled down to the belief the worst is over, both in terms of the pandemic and the impact on our economy. The federal government gets credit for intervening quickly with appropriate restrictions and stimulus measures to get the country through the worst of it. We consider ourselves fortunate in comparison with much of the world and many expect a return to some form of pre-pandemic “normalcy.”

The JobSeeker/JobKeeper programs are important components of the positive view. Investors and others greeted the news the program’s original target of 6.5 million workers fell 3 million short as a positive sign. The programs are up for review in June and scheduled to end in September. On 28 May in Senate testimony the head of the Reserve Bank acknowledged that while the economic impact of COVID-19 on the Australian economy may not be as severe as earlier forecasts suggested, it is still a “pretty depressing scenario” that could require extending the JobKeeper program beyond September. The Labor Party is pushing Prime Minister Morrison to extend both.

Another reality check comes from the Guardian Essential Survey. This survey taps into Australian opinions on a variety of issues. A recent survey release found only 18% of Aussies who lost their jobs due to the pandemic believe they will return to work once the crisis has passed. About 36% expect a long wait to find a job and 10% believe they will never find paid work again.

An economic modeling study out of the Booth School of Business at the University of Chicago came up with a shocking forecast – up to 42% job layoffs in the US due to the pandemic will never return.

For a final reality check, in a 26 May speech to the National Press Club, Prime Minister Morrison stated the economic recovery could take from three to five years.

Skeptical investors should see something of interest buried in the CBA report on credit card spending. Australian consumers have the second highest ratio of credit card debt to disposable income in the industrialised world, trailing only Switzerland. In late 2019 the ratio hit 190% and going into the pandemic the ratio stood at an astounding 200%. 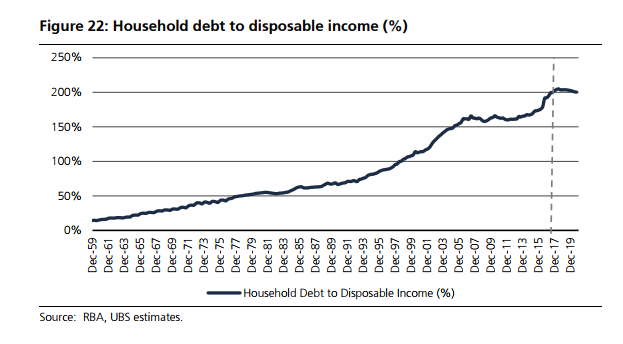 Despite massive infusions of federal cash into the wallets of Australian consumers, credit card spending is still rising. The risk of anything less than a return to something approaching a pre-pandemic economy seems obvious. Strapped consumers without the ability to increase credit limits and secure loans from traditional banks will look to other sources, sinking deeper into debt until the proverbial “house of cards” collapses.

Debt collection companies seem the obvious choice in the event the job recovery and stimulus payments are not enough to support consumers. An inquiry by the Financial Services Royal Commission into the credit and financial services companies that target Australians at risk of financial hardship sent the share price of multiple stocks into a tailspin, including the likes of Buy Now Pay Later Afterpay Touch Group (APT).

In the final report, APT and others emerged relatively unscathed but new regulations on other providers, including debt collection companies, added woes to some already struggling providers.

At best, the business model of collectors offering “accounts receivable” services targeting delinquent accounts held by a variety of companies from banks to utilities is fraught with risk.

In its simplest form, a debt collection company either assumes collection responsibilities for a client company’s unpaid debts for a commission fee, or buys the uncollected debts in bulk from the original holders of the debt at a steep discount, often as little as ten cents for each dollar. If the debt collector can reach an agreement with the debtor at twenty cents on a dollar, the profit is substantial. The twin risks are paying too much for a debt portfolio and failing to collect on the debt.

There are three debt collection companies listed on the ASX:

While all three were burdened with regulatory changes in the financial services sector and all three rely on borrowings to finance their debt portfolio acquisitions, Credit Corp Group seems to be the only ASX stock recognised by investors for its ability to weather the storm. 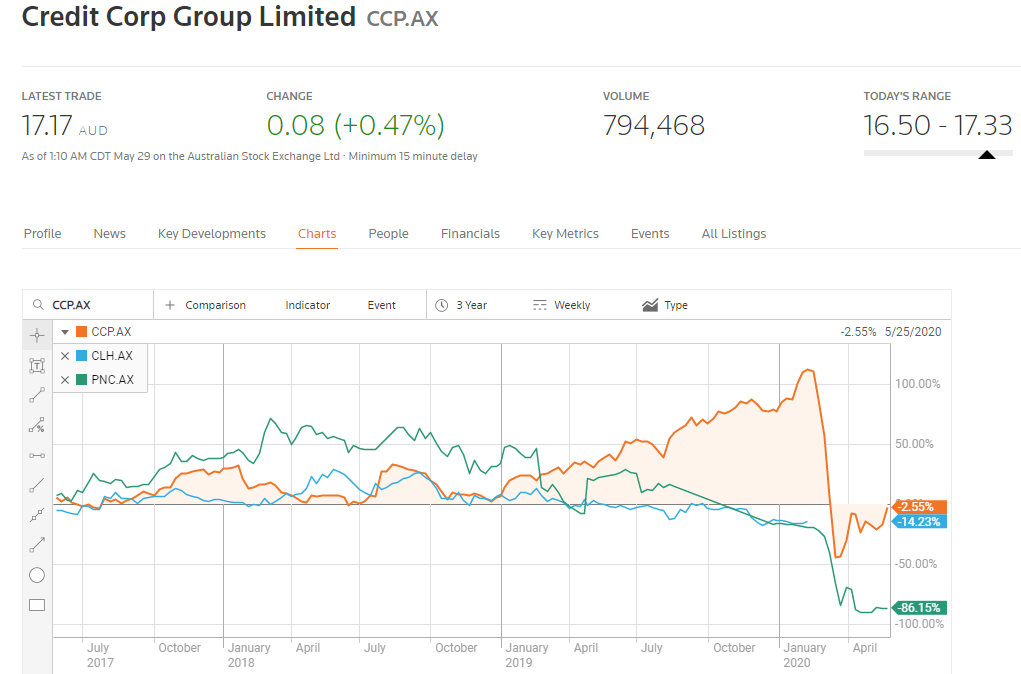 After a troubled history spanning two years, on 18 February Collection House requested a suspension of its shares from the ASX while the company conducted a “comprehensive review of its operating model and collection strategies.”

Pioneer Credit investors skeptical of the company’s controversial accounting practices were not surprised to learn the company requested a voluntary suspension on 2 September of 2019, with the following explanation:

In late 2019 private equity firm Carlyle Group stepped in to rescue the company but on 14 April of 2020 announced an additional 27 demands, accusing Pioneer of “non-compliant disclosure of information” prior to reaching the agreement and reserving the right to demand the return of funds already turned over to Pioneer.

Credit Corp Group has increased both revenue and profit over the last three fiscal years and its investors have received solid average annual rates of total shareholder return (share price appreciation plus dividends) of 11.7% over five years and 26% over ten years. Dividend payments have been solid as well, with a five-year growth rate of 12.5% and 27.7% over ten years. Credit Corp Group has a market cap of $1.1 billion, trading at $17.17. The share price is up 21% over the last month. The company operates here in Australia and in the United States.

FSA Group Limited (FSA) has a different model for the debt collection space. Rather than working with consumers on behalf of a creditor or the debt collector’s purchased debt, FSA acts as intermediary between consumers in trouble and their direct creditors.

The company also offers “non-conforming” home and personal loans to property-owners to pay their creditors as well as for automobile purchases. On 28 May the company issued a market update stating the company is experiencing a reduction in calls for assistance from new clients and is restructuring parts of the business to reduce costs. Management expects demand will increase as government stimulus support evaporates. Half Year 2020 Financial Results released on 21 February showed a slight decrease (4%) in operating income along with a 7% increase in profit. FSA Group has a current dividend yield of 5.4%, fully franked, and an attractive trailing twelve-month (ttm) P/E (price to earnings ratio) of 7.97. The average P/E for the diversified financial sector is 15.10. The company’s market cap is $115 million, and the shares are trading at $0.92.

Money3 Corporation Limited (MNY) is strictly in the consumer lending business, offering both automobile and personal loans. Auto loans are secured with an upper limit of $50,000 with both secured and unsecured loans for other purposes, with a $12,000 limit for unsecured loans.

Given its reliance on car loans, the company withdrew its guidance for the full year 2020 but claims it is “well prepared” with a strong balance sheet and low debt. MNY’s market cap is $313 million. The share price was crushed from all time highs at the onset of the pandemic but has recovered over the last month, now trading at $1.69. FSA shares followed a similar pattern. 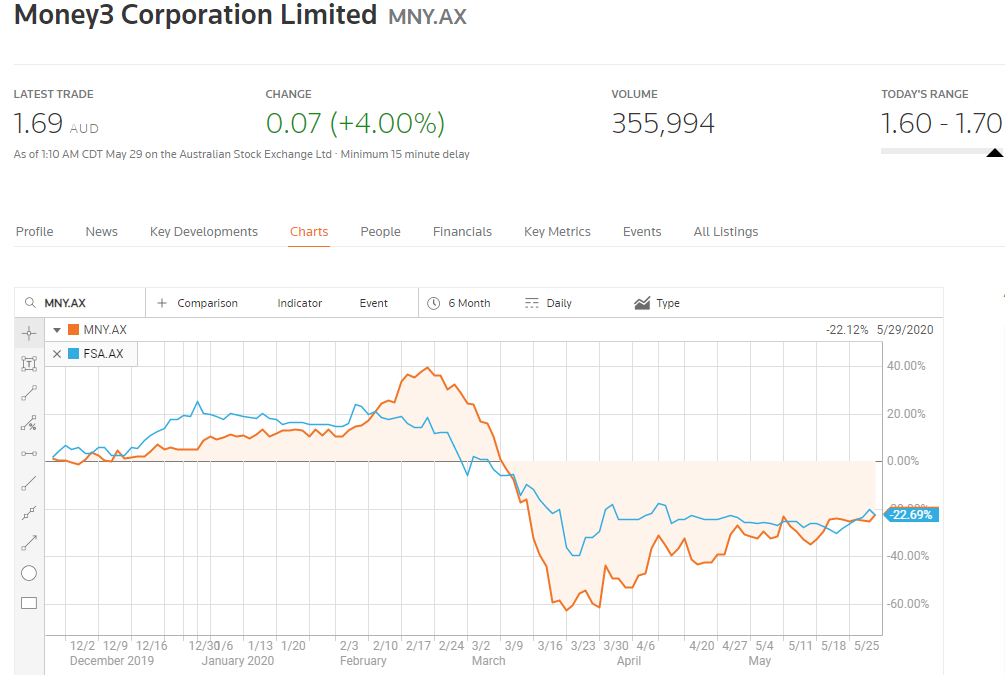 Cash Convertors International (CCV) may have an edge should economic conditions deteriorate as the company operates pawn shops here in Australia and in franchise operations internationally as well as making vehicle loans and personal finance loans to customers unable to access the traditional banking system. The company has 711 stores across 21 countries. Cash Convertors has an online application platform generating 53.9% of the company’s originating loans, with a mobile app launched in late 2019.

While vehicle loans and some personal loans are secured, the company’s cash advance loans have earned Cash Converters the moniker of “payday lender.” These loans are high interest with short-term repayments and are highly profitable. The company points to the fact it is providing a service to a consumer segment ignored by traditional lenders. Research firm Roy Morgan compiles Net Promoter Score (NPS) customer satisfaction levels, with Cash Converters rated higher overall than the big four banks and a moderately respectable 66.7% NPS from its cash advance customers.

While all four of the stocks of interest have rallied hard over the last month, CCV leads the pack. 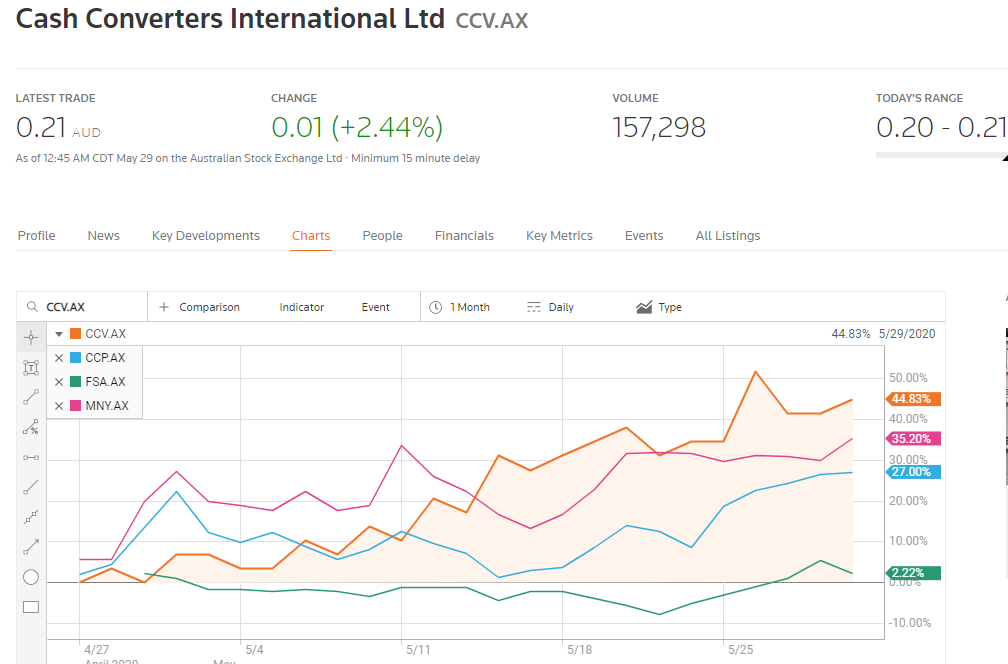 Diversified Financials in a Post-Pandemic World

“Investors Should Brace for another Market Sell-off, Analysts Warn” That was …