Nervous investors everywhere watch the daily movements of US stocks as likely bell weathers for stock performance in their own markets.

Through mid-May, the US lead followed in the majority of global markets continues to be bleak and tumultuous – down day after down day occasionally interrupted by rallies that quickly recede.

In the midst of the mayhem, the madness of the rampaging herd takes hold as investors begun to dump once treasured holdings into the trash heap.

Investors undaunted by the crowd know there are bargains to be found when “there is blood in the streets,” a phrase reportedly coined by British financier Nathan Rothschild in the 18th Century.

This remains the clarion call of contrarian investors to this day, a question remains – whose blood represents the least risk?

As of mid-May, the twin headwinds of rising inflation and interest rates were combining to yield substantial blood in the streets. Add to the mix concerns over the impact of the Ukrainian war on global economies in general and agricultural and energy commodities in particular and one could argue we have the ingredients for a perfect storm scenario.

In the US, the May Bank of America survey of global funds managers found the highest average cash balances in twenty years – 6.1%. The “R” word – recession – has begun to go beyond the whispering stage. At the close of business on 20 Friday, the US S&P 500 Index recovered slightly from its momentary drop into official Bear Market territory – dropping 20% from its January High. The Dow Jones Industrial Average (DJIA) posted its eighth straight losing week, the longest streak since 1923. The ASX 200 finished the week before the bad news out of the US, ending on a high note, up 1.2% and breaking a four week losing street.

Here in Australia, the ASX 200 is down roughly 6.3% as of mid-May while the once red hot ASX Technology sector (XTX) is down approximately 32.3%, both year-to-date.

In better times, investors gravitate towards stocks with the potential to “disrupt” the existing ways of doing business in the market sector in which they operate. Yet history has shown disruptors can be disrupted.

The adage “if you build a better mousetrap, the world will beat a path to your door” held a lesson ignored by investors in one of the most disruptive companies in Canadian history – Research in Motion, the creator of the Blackberry smartphone. Today many younger investors may have never even heard of the Blackberry as the Apple Corporation came out with a mousetrap judged by the world to be vastly superior – the iPhone.

The iPhone pushed the digitalization of the world – already apace – into hyperdrive. Among the earlier and arguably most impactful disruptors were the companies that transformed advertising from dominance in the print media to online sources in the 1990’s.

Here in Australia, three companies revolutionised not only the way consumers bought homes and cars and found jobs, but also the way the businesses selling these commodities grabbed consumer attention.

All three were founded in the mid-nineteen nineties, with real estate business REA Group (REA) beginning in 1995, followed by job-finder site SEEK Limited (SEK) and Carsales.com (CAR), both going into business in 1997.

For the past decade, each of these three companies has been a consistent dividend payer. The following table includes price and historical performance measures along with two year growth forecasts.

Since their inception, all three of these early disruptors have themselves faced potential “disruption” from competitors.

Smartcompany.com.au – a website supporting innovative companies and entrepreneurs – published an article in 2018, entitled: “When the disruptor becomes the disrupted: Seek co-founder Andrew Bassat on what happens when you get complacent.”

In the article the SEEK founder and CEO told the audience at the 2018 Disruptive Innovation Summit that it took the threat of disruption from the arrival of the likes of online employment sources LinkedIn and Indeed in 2009 for SEEK to begin adapting their platform with the latest advances in technology, including Artificial Intelligence (AI).

The post-pandemic employment outlook seems bright for SEEK’s prospects. In the US, employees have been abandoning their jobs, leading to a twenty-five year high in voluntary resignations in that country. This has contributed to the overall employment situation in the US, with more available jobs than people to fill them.

The situation here in Australia is similar, with the RBA stating job mobility here is “at record levels.” April unemployment fell to a fifty year low – 3.9% — but only about 4,000 people took jobs, falling far short of the expected increase of 30,000.

All three companies felt the early impact of the onset of COVID 19, and all have recovered. From the ASX website: 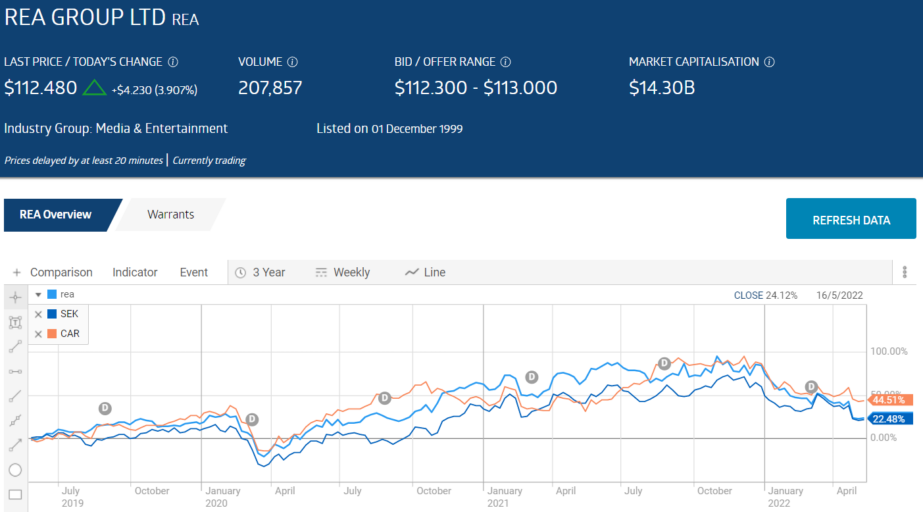 Following a significant rebound in financial results reported for the Full Year 2021 (revenues up 17% and profit up 58%), the Half Year 2022 results reported in February continued the recovery pattern. Operating revenues were up 59% while net profit after tax (NPAT) was up 147%. The company’s Australian market share is 34.3% while its Asian operations account for 23% of the employment market.

SEEK operates here in Australia and in New Zealand as well as internationally with SEEK Asia and operations in Latin America. The company has broadened its scope to include SEEK Learning, offering educational opportunities as well as SEEK Business for the selling of business and franchising opportunities, and an investment vehicle – the SEEK Growth Fund.

REA Group has posted a performance record unmatched by the vast majority of ASX listed stocks. The five and ten year average growth rates in both earnings and dividends plus the average rates of total shareholder return put this stock in the neighborhood of returns posted by BHP Group (BHP) and CSL Limited (CSL).

Yet analysts still feel REA Group has petrol left in its tank, with double digit two year earnings growth forecasts in both earnings and dividends. In FY 2020 the company saw a slight dip in revenue while still increasing its profit before rising again in FY 2021 with an 18% increase in profit and a 13% revenue increase. Half Year 2022 results continue unabated, with revenues rising 25% and NPAT up 33%.

The company is a veritable powerhouse in Asia, ranking as the top property related website in Australia, Singapore, Malaysia, Viet Nam, and Thailand, with the expectation of adding India to the list. REA also operates in the US.

REA was among the first to move property listings from print into the world of digital advertising. Today the company operates multiple property portals, key among them realestate.com.au, realcommercial.com.au., and flatmates.com.au. For its international business REA Group operates branded websites in each of the countries in which it operates.

The company has expanded into multiple property related businesses beginning with home loans and mortgages. REA considers itself as much a technology company as a media company as through the years the company has used technology to provide value added services for its entire customer base – residential and commercial buyers and sellers. Data research website PropTrak along with Realtair, Simpology and others offer tools for professional residential and commercial brokers, agents, and mortgage loan providers.

The smallest of the three early disruptors, Carsales.com, followed the same pattern – take something that is bought and sold out of the print world of classified advertising and move it online.

Like the others, Carsales.com has expanded its operations far beyond the early days of allowing car dealerships and residential car buyers and sellers a more efficient and less costly way to advertise and buy and sell.

The company now offers classified advertising and related services for buyers and sellers of cars, boats, motorcycles, and recreational vehicles. Carsales.com has expanded beyond Australia with operations throughout the Asia Pacific Region, with interests in top rated automotive classified businesses in the United States, Brazil, South Korea, Mexico, Chile, and Argentina. The company has an Automotive Data Services Division offering a range of services from website hosting to photography, to research and analysis software.

On all fronts, the company’s Half Year 2022 Financial Results reported in February were cause for investor optimism. Both reported revenue and profit were up 22% with the largest growth (38%) coming from private sellers and buyers, due in part to a reduction in use of public transport, international travel, and work commuting.

The financial results showed an improvement over the Full Year 2021 Results, which showed a 4% revenue increase along with an 11% rise in profit. The outlook for the Full Year 2022 was positive to the extreme, with Carsales.com management claiming the second half of the year will show considerable performance improvements over the first half. New car advertising is improving as is published car inventories.

In addition to Carsales.com’s ten branded websites here in Australia, the company has four in its international operations. Finally, the company also operates an online tire retailer and an inspection service, RedBook Inspect.

Nervous investors everywhere watch the daily movements of US stocks …