The closing month of the third quarter of 2020 halted the upward movement of markets both here in Australia and in the US.

On the last trading day of Q3 the ASX200 fell 2.29% to post both its first monthly loss since March as well as a decline for the quarter overall – dropping 1.39%.

The favored US index of professional investors, the S&P500, dropped 3.9%, the first monthly decline since March and the biggest September drop since 2011. However, the index still posted an 8.7% increase for Q3, the biggest rise since 2010.

Although trading on the first day of the fourth quarter showed gains in both countries, market volatility remains an issue with troubling concerns lurking under the optimistic surface, primarily in the US. While here in Australia federal stimulus remains, albeit with reductions in payments, government assistance in the US is evaporating with the US congress unable to agree on further stimulus measures. The once unthinkable prospect of a US president refusing to accept the results of an election is getting unrelenting media coverage. The shocking revelation the President of the United States has contracted COVID 19 is likely to rattle markets for a weeks.

In times like these, previous “market darlings” are subject to mass falling out of favor, especially among investors of all stripes who have reaped big profits.

Although there appears to be no generally accepted definition of what constitutes a “market darling”, historically a stock begins to reach that status spurred on by a consensus in the analyst community anointing the stock as a favourite, with sales and profit growth hailed as potentially unending. The investing community picks up the charge, and the stock becomes one everyone is talking about and recommending.

Sectors can breed multiple market darlings, as is the case today with the BNPL (Buy Now Pay Later) sector. Less than a decade ago, manufacturers of infant formula and baby food vaulted into market darling status, led by Bellamy’s Australia, now acquired by Chinese manufacturing and distribution company of dairy products and ice cream, China Mengniu.

The A2M stock price has been rising since listing in 2014 with some volatility creeping in when the Chinese government stepped in to regulate an infant formula market out of control, in the government’s view. The company weathered that storm but COVID 19 appears to have knocked an already declining A2M from its market darling pedestal. 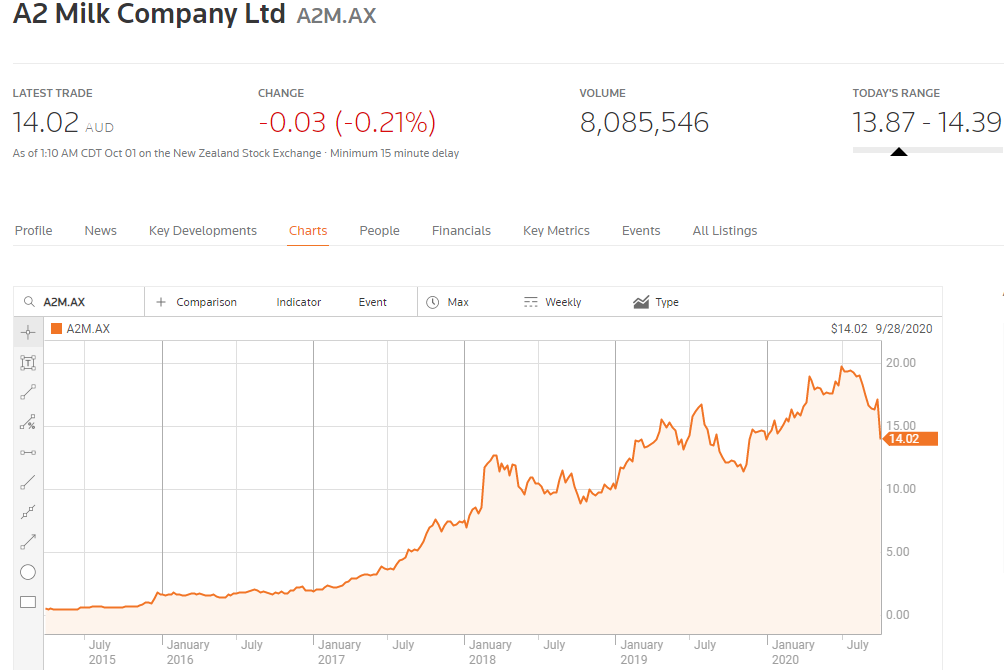 In 2008 Chinese parents were shocked to learn of domestic manufacturers tainting infant formula powder with melamine, and a mad stampede to foreign brands began.

Given the massive potential of the sector, it is little wonder the Chinese government has recently set a goal of achieving 60% of infant formula sales in China coming from domestic manufacturers. The National Development and Reform Commission, the Ministry of Commerce, the Ministry of Industry and Information Technology, and four other ministries claim production of domestic baby formula is increasing as is consumer confidence in domestic suppliers.

Most of the ASX players in the market are diversified, offering other milk products for adults and older age children as well as organic health products.

An increasing series of Chinese government regulations in the infant formula space commencing in 2016 reached their zenith in 2018 with additional regulatory intrusions in 2019. Investor sentiment on the ASX players soured in 2019 with the announcement global powerhouse Nestle was entering the already competitive Chinese market. Despite this, going into 2020 the five ASX stocks in our table maintained impressive share price performance over five years. The question for investors with risk tolerance is can these stocks return to the glory days. 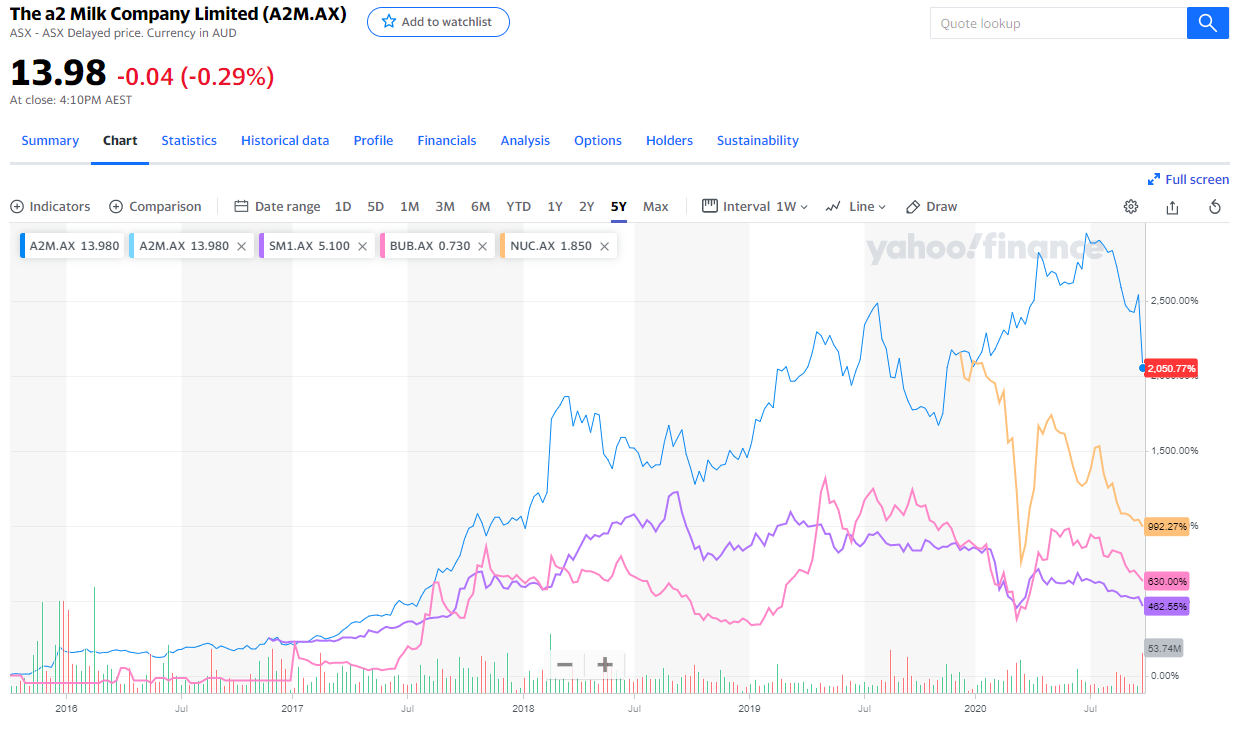 The a2 Milk Company (A2M) produces a wide range of milk products, including infant formula in conjunction with Synlait Milk Company (SM1) with both companies based in New Zealand.

Traditional milk combines two naturally occurring casein proteins – A1 and A2. The A2 protein eliminates the allergic risk some consumers have with ordinary milk. The a2 Milk Company uses specially bred cows that produce only the A2 protein, making it available to those with allergies and healthier for all.

In the US, a2 milk is used in the production of infant formula from most of that country’s leading manufacturers. The cows in a2 Milk farms in the United States are all Validus certified through the USDA (United States Department of Agriculture). Validus certification is an ongoing audit and assessment program.

For the Full Year 2020 US revenues from the company’s extensive line of milk products grew 91%. The a2 Milk company line can be found in major US grocery retailers from Kroger to Walmart to Whole Foods to Costco and Target.

FY 2020 revenues were up 33% while profit was up 32%. Revenues were evenly distributed, with 29.7% coming from liquid milk products; 33.8% from infant formula products; and 29.7% from “other nutritional products.” The company operates in Australia/New Zealand, the UK and the US, and the Asia Pacific Region, with operations in Canada forthcoming.

Despite the glowing results report, the shares went into a tailspin following an update to the company’s outlook for FY 2020. Here is what management said:

Investors apparently were not impressed with the company’s view that the risks would be limited to the first half of FY 2021.

The relationship between the a2 Milk Company and Synlait Milk Company began in 2012, when Synlait signed an agreement with a2 Milk to process and supply the a2 milk line of a2 Platinum® infant formula. The agreement has been extended multiple times, with a2 Milk taking an equity interest in Synlait along the way.

Synlait has a technology for extracting Lactoferrin, an ideal additive for both the infant formula and the adult nutritional products Synlait manufactures. The company exports its products to China and the rest of Asia along with the Middle East, and Africa.

Along with its nutritional powder products, the company sells traditional dairy products, including fresh milk, cream, and cheese. Synlait is on a strategic growth strategy, which seems to have failed to convince investors Synlait can expand beyond its core nutritional powder base.

Synlait’s Full Year 2020 Financial Results were disappointing, with revenues up 13% but profit declining 9%. The profit decline was attributed to capital expenditures for the company’s expansion initiatives.

Like its larger rival, Bubs Australia (BUB) Nuchev’s products are goat milk based. The company makes a branded line of infant, toddler, and adult milk powders called Oli6. The company sells its line here in Australian retailers Coles and Chemist Warehouse and in China and Hong Kong.

Nuchev has plans to “expand into other health and nutrition products in the future.”

Bubs once had the moniker of “the next a2 Milk Company” but the company’s share price performance year to date lags far behind A2M. Although there may be added digestive health benefits of goat’s milk versus cow’s milk, Bubs’ product line lacks diversity, currently offering infant milk formula and organic infant food. Products are distributed in Australian pharmacies and supermarkets – including Coles and Chemist Warehouse — and exported to China, South East Asia, and the Middle East.

Full Year Financial Results showed a 24% revenue increase and a smaller loss of $7.5 million, down from an FY 2019 loss of $35.5 million. The company’s recent $40 million dollar capital raise was not well received by investors. Bubs stated the company’s infant formula line “remains the long term engine of profitable growth.”

Given the increasing competition in the Chinese market, the company’s focus on the infant market poses a level of risk some investors may be unwilling to accept. However, Bubs is expanding, with product launches into Vietnam and Hong Kong in FY 2020 and planned FY 2021 launches in Malaysia and the Middle East.

Although not a manufacturer of infant formula, Clover Corp (CLV) does make a key ingredient used by most infant formula producers – omega-3 oils. The company has proprietary microencapsulation technologies that allow the extraction and coating of nutritional oils, such as tuna, fish, algal and fungal oils, to be used as additives to infant formula, foods, and beverages.

The company has increased both revenues and profits in each of the last three fiscal years. In FY 2020 revenues rose 15.1% and profit was up 23.6%. The company could receive significant tailwinds from efforts to improve the nutritional quality of infant formula and other health related supplements.

The closing month of the third quarter of 2020 halted …