Buying New IPOs on the Dip

Author Bob Kohut
14 February 2021 13min read
PREVIOUS ARTICLE Why Germany only does the mini... NEXT ARTICLE What's ahead for China's marke...

“Getting in on the ground floor” is the bait driving investor appetite for Initial Public Offerings. The breathless hype tracking the post-IPO performance of a stock like Afterpay (APT) gets the blood pumping enough to ignore the alternative outcome – when the ground floor collapses into the basement.

The trading year 2021 looks for a continuation of the rebound in IPO listings that began in late 2020, following dismal performance as the pandemic took hold earlier in the year.

All the more reason for retail investors to proceed with caution. There are two critical concerns where investing at the ground floor differs dramatically from investing in an existing stock.

The first is timing. All retail investors should have a profit expectation targeting what they consider an acceptable level of return. There is an inherent clash between the timing of the short term investor versus that of the long term investor. The clash is heightened in IPO investing where the lure of cashing out quickly on a stock that jumps right out of the gate can hurt the interests of investors buying in for the long haul. Lockdown periods dictating when pre-IPO company officials can sell are meant to prevent sharp declines in the rush for the exits.

The second, related to the first, is the “story.” All IPOs have a story to tell, outlined in an IPO Prospectus, a must read for all potential investors. To alleviate the boredom of wading through such a document, there are central issues to consider outlined in “how to” articles on IPO investing.

The story has many sides, from superior existing products generating revenue, to the promise of major breakthroughs, to the potential to disrupt existing ways of doing business. Hot sectors like tech and bio-tech are more attractive to some than utilities or telecommunications.

Some evidence to which investors should be exposed favors short term timing over a longer haul. The following graph from Castle Point Funds Management makes the point, showing the decline setting in share price after about ten months. 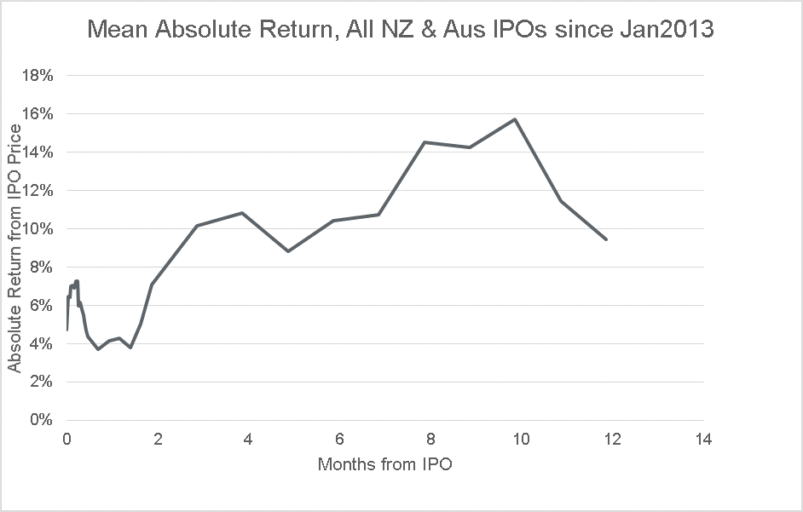 The situation in the US is similar, as evidenced by the following graph from financial website cnbc.com. 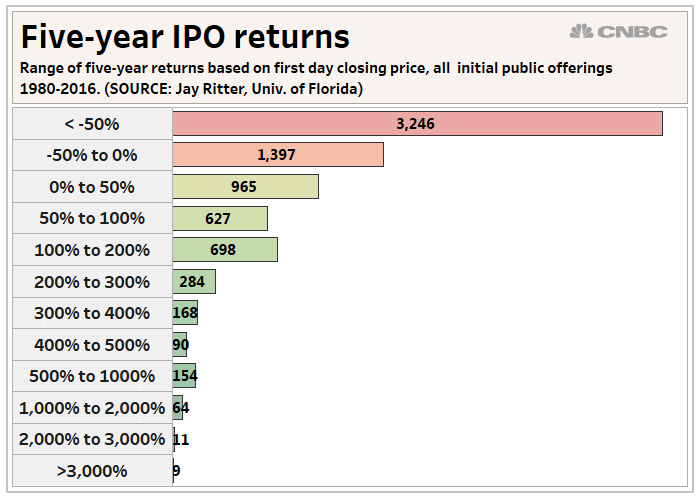 Average historical performance in graphs like these lump high performers in with low performers, leaving some investors believing they know how to pick winners.

In times past retail investors could not get into an IPO until the day the stock began trading. The advent of onmarket.com.au allowed retail investors to bid on select IPOs. For stocks generating substantial interest, waiting until the opening bell rings can be costly. When coupled with the potential of downward price movement, waiting to pull the trigger seems a prudent approach.

Right now there are several IPOs that have listed in 2021 or late in 2020 whose share prices have already begun to decline.

Two of them have the kind of story revenue cautious financial experts advise IPO investors to consider. Products already in the market generating revenue make for less risk. The higher the revenue and the longer the history the sooner the company will turn profitable, or so the thinking goes.

The first stock – TrueScreen Group Limited (TRU) listed on the ASX on 29 January with a first day closing price of $0.185, steadily declining to the current price of $0.105. The company has a product in the market – the TruScreen Cervical Cancer Screening System.

The system originated from researchers at Sydney University and is now approved by the China Food and Drug Administration for use there and by the EC (European Community) for use in Europe. In addition, the system is available in Israel, Saudi Arabia, Mexico, Russia, Turkey, and Viet Nam. The company’s marketing strategy is targeting LMIs (low and middle income countries) lacking in large scale cervical cancer screening and the hospital/clinic infrastructure needed to administer the traditional screening approach and analyse the results.

Unlike the traditional pap smear, the TruScreen Cervical Cancer Screening System is not invasive with results available immediately. The system encompasses digital technology into a wand-like device that measures electrical and optical signals from the top of the cervix.

TruScreen is New Zealand based and closes its fiscal year at the end of March. The company grew sales from $800,000 in 2018 to $1.86 million in 2019 but the early impact of COVID 19 in China, the company’s largest market, drove sales down 31%. The company has major expansion plans for both India and Africa and has the potential to disrupt the traditional approach to cervical cancer screening.

The performance of the TruScreen System has been subjected to multiple clinical studies, with all studies finding the system to be equal or superior to traditional methods.

The next recent healthcare IPO, Chimeric Therapeutics (CHM), listed on the same day as TruScreen – 29 January – but has its lead cell-based brain cancer treatment in a Phase 1 Clinical Trial and as such is generating no revenue.

Despite having no products in the marketplace and no revenue, the Chimeric share price has actually outperformed TruScreen, although both followed a common pattern among many IPOs – quick rise out of the gate followed by a steady decline. 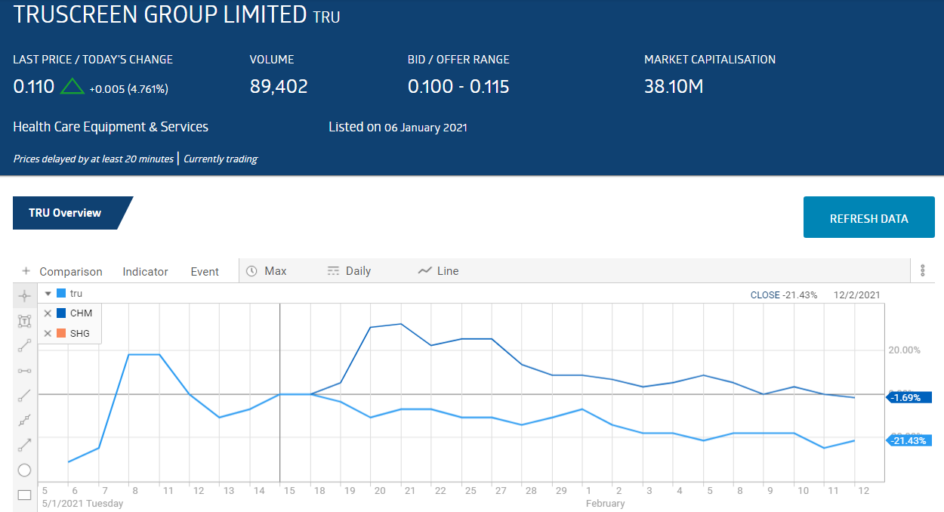 Chimeric is a cell technology working on an immunotherapy — CLTX-CAR T – based on chlorotoxin. Immunotherapies are emerging as viable treatments for cancers by modifying the T cells in the human immune system to fight cancer. Chlorotoxin is a non-toxic venom extracted from the death stalker scorpion.

Studies have shown Chlorotoxin will bind to glioblastoma brain cancer cells. Glioblastoma is an aggressive brain tumor with a low survival rate. More than 10,000 people per year in the US die from the disease.

Chimeric Therapeutics has a Phase 1 CLTX-CAR T Clinical Study for the treatment of glioblastoma underway at the City of Hope National Medical Center in California. The agreement between City of Hope and Chimeric grants Chimeric the right to commercialise the treatment and “further development of therapies for other types of cancer.

Investors familiar with the bio-technology sector know the rigorous and lengthy approval process and the high failure rate of treatments in early clinical stage trials. Chimeric Therapeutics may have a compelling story to tell, but it is likely to be a long journey to the ends of revenue and profitability.

Singular Health is a software/hardware device company operating in the 3D medical imaging and printing industry. The company has a potentially revolutionary technology employing algorithms and proprietary code in a Volumetric Rendering Platform (VRP).

The company’s lead product to date is MedVR – a software based platform for converting standard 2D medical images such as X-rays, Cat Scans, and MRIs into a 3D rendering. The 3D image enables interactive participation, allowing medical practitioners to manipulate, modify, and visualise the image.

MedVR is approved here in Australia and is currently in use here and in Hong Kong, Singapore, South Africa, and Switzerland, serving practitioners in the fields of orthodontics, maxillo-facial surgery, oncology, general surgery and orthopaedics.

Singular’s revenues come from sales of VR hardware and recurring software subscription fees. The company claims its technology development is sufficient to begin exploring new applications, with one being a platform for use with geological data using 3D and virtual reality called GeoVR.

Investors looking to the red hot BNPL (Buy Now Pay Later) for potential investments have a new player on the ASX – Payright Limited (PYR), listing right before Christmas. The company’s business model differs from most companies in the sector in at least two ways. 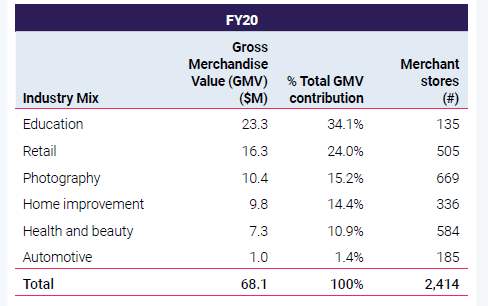 Second, Payright has tougher lending standards, including credit checks through Equifax Inc (NYSE: EFX). Regular followers of the sector may worry about coming regulations, as are being considered in the UK. The ASIC (Australian Securities and Investments Commission) claims one in five BNPL consumers are missing payments. In addition, the commission found 18 – 29 year old consumers are reducing spending on items considered essential to meet their BNPL repayments.

In theory, the more diverse client base and stricter credit assessments — sure to be viewed favorably by regulators — should give Payright somewhat of a competitive advantage. However, investors do not appear to be buying that argument as the stock price has been declining since listing, far behind the share price performance gains of market darling and BNPL leader AfterPay (APT). 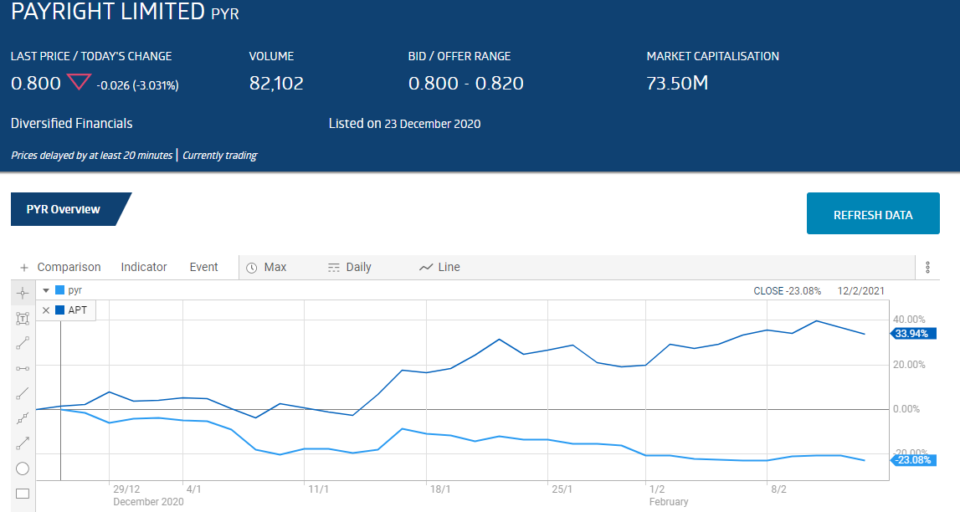 Buying New IPOs on the Dip

“Getting in on the ground floor” is the bait driving …