Although the US market trails much of the world — especially Australia — in consumer adoption of what some believe to be a new and revolutionary approach to buying goods, the origins of the current Buy Now Pay Later (BNPL) mania can actually traced back to installment plans in the US as early as the 1850’s.

Buying goods and paying over time in the US came to be known as “Layaway” and here in Australia “LayBuy.” Both gradually faded away with the rise of credit card usage beginning in the late 1960’s.

The distinction of introducing BNPL to the world seems to belong to the Swedish company, Klarna, going into business back in 2005.

Early on, wary consumer advocacy groups began howling that the BNPL sector was essentially in the installment loan business and should be regulated as other lenders in the sector are.

Apparently unbothered by the regulatory threat and the massive increase in competition, Aussie investors could not get enough shares of market darling Afterpay and its closest ASX competitor Zip Co (ZIP). Over three years the Afterpay share price rose 688% while Zip was up 370%. It would seem investors may have assumed the size of the market would provide “slices of the pie” for multiple competitors. 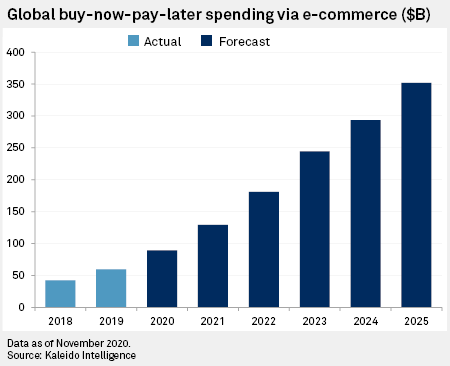 COVID 19 drove online sales upward with a vengeance and along with them the BNPL providers prospered. The second half of calendar year 2021 has not been so kind, as the two leaders and their somewhat smaller counterparts are in the red for the last three months. Shares of Sezzle Inc (SZL), Humm Group (HUM), Splitit (SPT), Openpay (OPY), and LayBuy (LBY) have all declined. 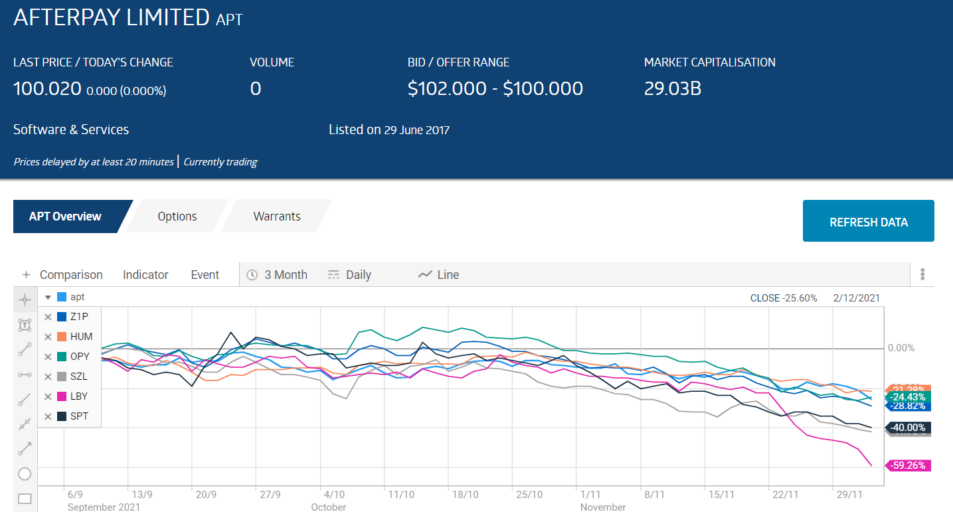 There is no single explanation for the sector falling out of favor with Aussie investors. Some analysts have maintained BUY ratings on APT and mixed ratings on the other stocks.

It is possible investors are now concerned about issues they were willing to ignore in the past.

First, traditional credit providers and other well-known companies have invaded the space en masse. Visa, Paypal, Apple, and Amazon are among the most noteworthy. Commonwealth Bank of Australia (CBA) is in, incorporating the Klarna BNPL platform into the CBA mobile banking app.

Second, the cut-throat competition may have opened the eyes of investors previously blinded by massive revenue and customer growth with no profit. Humm Group is the only profitable major ASX BNPL player.

Third, the risk of governments slapping regulations on the sector similar to what other credit lenders are burdened with may be growing.

These concerns have been on the radar for some time, but investors now seem more concerned, possibly focusing most on the massive losses posted.

In the past few weeks, multiple Australian financial outlets are highlighting the views of the CEO and payment analyst of McLean Roche Consulting, Grant Halverson. The firm offers some troubling figures gleaned from FY 2021 financial reports:

Evidence of financial challenges facing some BNPL providers came to light in late August, when the auditors of Openpay – Price Waterhouse Cooper — announced the company would need to secure additional funding to remain a going concern.

The Openpay Full Year 2021 Financial Results showed cash flow drains stemming from aggressive spending to expand along with a 55% rise in accounts receivable. In addition, the arrears rate rose from 0.8% in FY 2020 to 2.8% in FY 2021.

The RBA move may the most problematic, on two fronts. Raising costs to the consumer could make BNPL purchases less attractive, especially when the fees are what the BNPL provider charges the retailer. The bigger concern is the Reserve Bank of Australia (RBA) even considering such a regulatory intrusion into the sector.

The ASX has twelve listed BNPL providers, the most in the world. Australians adopted the sector while it was in the neo-natal state in the US. To continue the world leadership role, Australia is the first country where the BNPL industry has adopted “self-regulatory” standards.

The Australian National Consumer Credit Protection Act of 2009 does not apply to interest free credit for short term and other types of loans. Since their inception about seven years ago, BNPL providers in Australia have remained completely unregulated, earning the sector the accolade of “the wild west of lending,” from the McLean Roche Consulting CEO.

Amidst an accelerating chorus of concerns over indebted consumers, the industry has acted on its own. On 1 March of 2021, the Australian Finance Industry Association (AFIA), in conjunction with major BNPL providers operating in Australia, announced the BNPL Code of Practice.

The key practice in the code makes it mandatory for BNPL providers to conduct financial checks to ensure consumers do not take on more debt than they can manage.

While this is the only code of standards in effect in the world, some industry watchdog groups remain skeptical. A 9 March 2021 article appearing on the website S&P Global Market Intelligence states Australian regulators might still step in with stricter controls should a “significant number of BNPL customers face difficulty in repaying their debt.”

There are indications the regulators could intervene within a year. On 28 October, the Parliamentary Joint Committee Inquiry into Mobile Payment and Digital Wallet Financial Services report was released. Although the report suggested no immediate changes, the recommendations did suggest the AFIA should continue to monitor adherence to the BNPL Code and its overall effectiveness over the next twelve months.

In short, the cloud of regulatory uncertainty remains, with the possibility new regulations in the UK and other countries could pressure Australian regulators to act. The Joint Committee will conduct a second inquiry by September of 2022.

Given the challenging future, Australian BNPL leader Afterpay should remain a favored target of Aussie investors following its buyout from US digital payments company Square. The $29 billion dollar acquisition announced on 02 August is the biggest buyout in Australian history and was seen as an affirmation of the viability of the BNPL sector.

However, the confidence expressed in the sector by the American company planning to integrate the Afterpay platform with its existing Cash Apps does not extend to all BNPL providers.

Afterpay can continue to expand its presence in the US market, and now has a major competitive advantage to add to its laurels. On 19 August, the company announced a new tool in its quiver, Afterpay iQ. In response to inquiries from its merchant customers on the possibility of data mining their Afterpay transactions, engineers at the company created an Artificial Intelligence based analytics platform.

Afterpay iQ can provide services no other BNPL can at this time – insights into their customers buying behavior, motivations, and order history patterns.

Afterpay is poised to continue to grow through its association with Square. Risk averse investors interested in safer choices within the BNPL sector should consider the companies aligning themselves with impressive partners.

Zip has alliances with VISA, Apple Pay, and Google Pay, but the company’s hyper aggressive acquisition strategy appears to be hurting the share price.

Square chose to buy Afterpay rather than build its own BNPL platform. Despite the challenges the company faced, Openpay has now inked a partnership agreement with American Express, announced on 2 December.

American Express card members can eliminate the need to register for a BNPL plan by using their existing card to gain access to the Openpay BNPL platform. American Express merchants in the Healthcare and Automotive sectors will have access to the larger and extended repayment options offered by Openpay. The two companies will collaborate on additional products to leverage Openpay’s business to business (B2B) and business to consumer (B2C) platforms.

Sorting through the financial news and ASX announcements of the other BNPL players generally reveals a similar pattern – impressive revenue and customer growth along with market expansions and massive spending. Some have inked partnerships with second tier BNPL or mobile payment providers.

With only one will you find all that along with what is the end game of share market investing – profit. That company is Humm Group. Between FY 2020 and FY 2021 revenues declined 7.3%, but profits more than doubled. Revenues fell to $435 million dollars from $467 million while net profit after tax (NPAT) went from $21 million dollars to $60 million.

Humm is not a pure play BNPL provider, offering credit cards and financing options for businesses as well. The company has partnership arrangements with Air New Zealand and Westpac NZ.

Although the US market trails much of the world -- …