More difficult to find is the view expressed by many market experts that far too many retail investors follow a different strategy:

There is comfort in numbers so many newcomers look to stocks everyone is buying. These “hot” stocks are rising in price because of the economic law of supply and demand. When demand for a stock is high, owners of the stock hold out for higher prices, which buyers are willing to pay. The problem here is that the stock price may or may not reflect the fundamentals of the company.

As a consequence, once market sentiment turns, investors who bought at high prices panic and sell at lower prices as the upward trending stock reverses.

In theory, Buy Low Sell High seems common sense but for many that strategy lacks the confirmation bias of the crowd. After all, investors flocking to a stock have to be a positive indication, so another bias gets in the way – the fear of losing out on a big winner.

When the “winner” starts to look like a loser retailers bail out, only to begin repeating the cycle once the stock regains its upward momentum.

The following humorous chart from US based Sherman Wealth Management depicts the cycle. 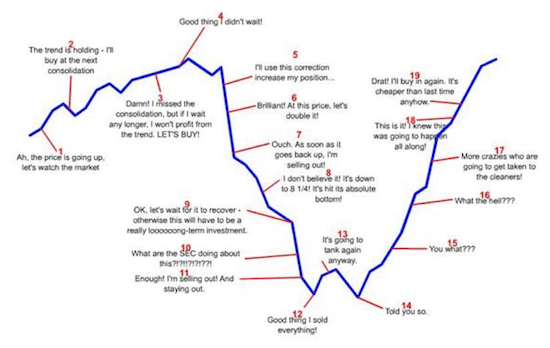 For a more serious look at this seemingly odd phenomenon we have the following graph from another US based firm – iSPYETF.

The graph tracks the performance of the US S&P 500 Index against AAII (American Association of Individual Investors) equity allocations in their investment portfolios. 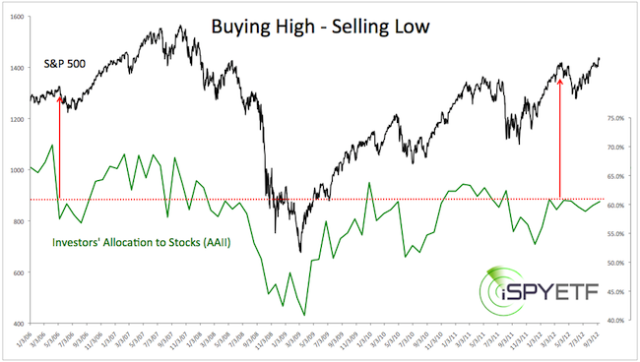 Biases are part of human nature and controlling them is no easy task. It is one thing to read advice about overcoming the fear of losing money, but without any facts to back up that bromide, the advice falls by the wayside.

There are some market experts out there that do offer a valuable, and factual, insight – the power of time.

Newcomers to share market investing would be well served to look back at one of the worst market collapses in history – the Great Financial Crisis (GFC) of 2008. The vast majority of quality companies crushed in the wake of that disaster have recovered.

The same can be said of the iron ore miners whose stock prices were beaten senseless following the supposed “death of the mining boom.”

Falling from record highs, the price of iron ore would never again climb to such heights, claimed some analysts. Yet in the span of a single decade, they have. A new record high of $USD193.85 per tonne on Tuesday 27 March eclipsed the previous record set in 2011. In addition, the ABS (Australian Bureau of Statistics) reported record exports of iron ore in March.

Older investors know that a decade can pass in what seems a flash, but those nearing retirement are not likely to have the patience to wait a decade for their returns. Young investors can afford that luxury with a dose of patience. The following price chart from the ASX website shows the ten year appreciation of iron ore providers – pure play Fortescue Metals Group (FMG); diversified iron ore miner and services provider Mineral Resources (MIN); and steel producer BlueScope Steel (BSL). 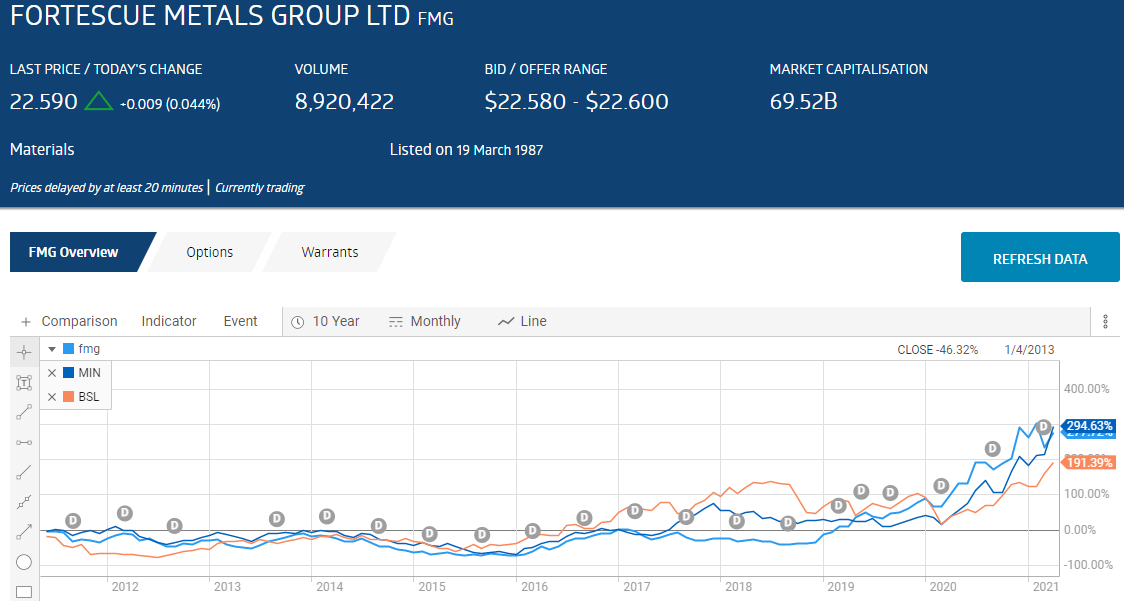 The price of iron ore collapsed after the market perceived a major drop in the demand for steel. Investors wise enough to realise steel was not about to disappear from the face of the earth and blessed with some patience have been well rewarded.

A more recent story is underway that demonstrates the power of time and patience. A few short years ago the talk of the explosion in demand for lithium-ion (Li-ion) batteries would soon get another boost from expectations that more and more Electric Vehicles (EVs) would soon be appearing on the world’s roadways. Investors en masse dove into lithium mining stocks. More miners entered the market and demand was slower than expected, driving down the price of the commodity.

Investors who bought stock in the run-up going into 2018 and sold out at a loss missed the rebound that began in late 2020. 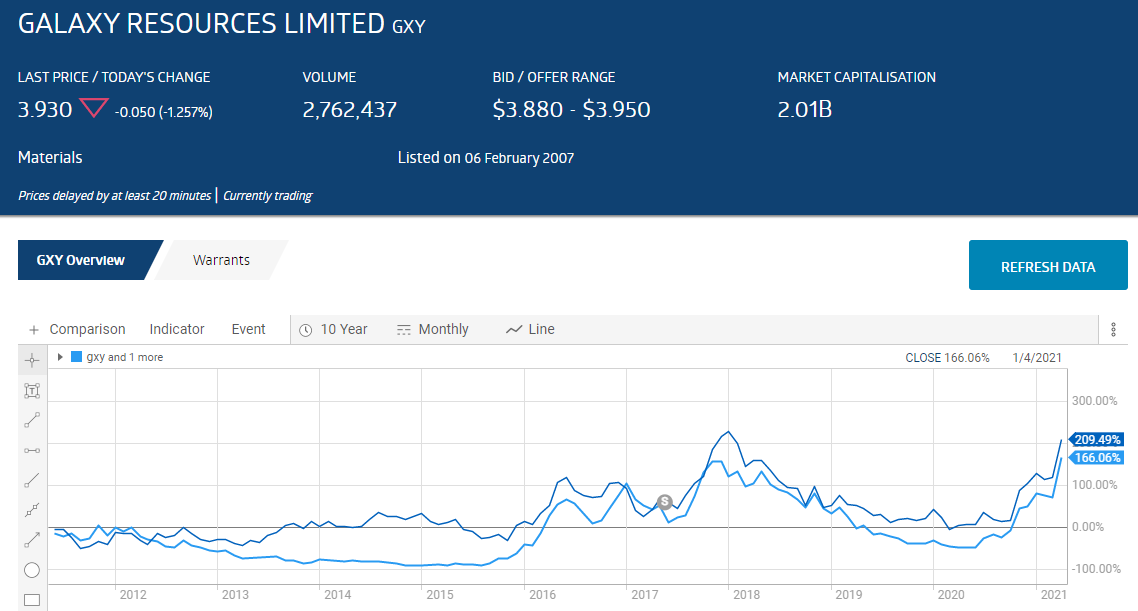 Demand for many commodities is volatile but history tells us the majority eventually come back. In the case of lithium, the dip lasted less than 3 years. Galaxy and Orocobre have both made their exits from the Top Thirty Short List and are in the process of merging to become the fifth largest lithium producer in the world, with production capabilities in both major methods of lithium production – extraction from hard rock and from salty brine.

With a $4 billion dollar merger in the offing, the boat may have sailed on shares of Galaxy and Orocobre, but there are eight other stocks of companies involved in the lithium race that have caught fire since the beginning of the year, ranging from small caps to large caps. First, here are the three larger companies:

And here is their year over year share price appreciation: 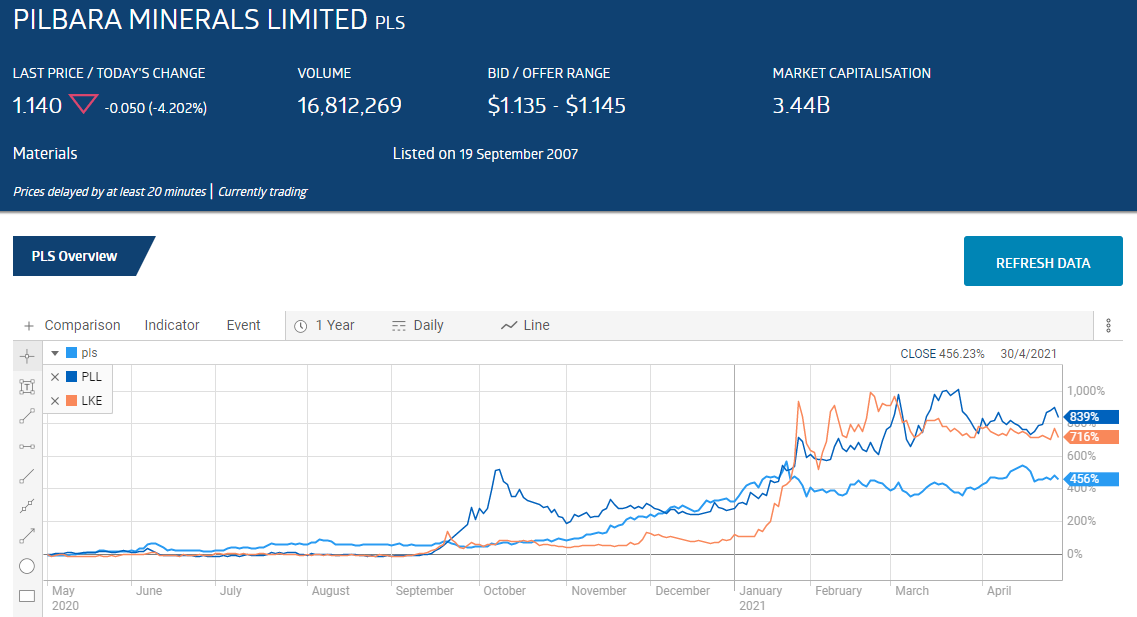 Pilbara would be the stock of choice for those with less patience, as analysts estimate a 69% increase in earnings per share (EPS) over the next two years, going positive in FY2022 with a positive EPS of 2.9 cents per share. The company has withstood the “test of time” with an average annual rate of total shareholder return over ten years of 36.4% and 15.9% over five years.

Pilbara claims to be the “leading pure-play lithium company on the ASX” due to its whole ownership of its Pilgangoora Lithium Operation in the Pilbara region of Western Australia.

The project includes two processing plants, infrastructure access, and has already begun production and shipping. Pilbara has offtake (purchasing agreements) for its existing production, with another project under exploration.

Piedmont Lithium has a wholly owned project underway in the US state of North Carolina.

The demand for lithium is being propelled hard by US EV manufacturer Tesla, a major player in the development of Li-ion batteries for storage as well as for EVs. It was Tesla that built the battery storage facility in South Australia back in 2016.

In late September of 2020 Piedmont signed a five year deal with Tesla to supply Tesla with at least 160,000 tons per year of concentrated lithium ore from its North Carolina project, commencing sometime in mid to late 2022.

Lake Resources has four lithium from brine projects in Argentina. Its share price has been on a rampage in 2021 with one positive announcement following another. The company is expanding its development schedule to meet what management anticipates will be high demand for its high grade lithium carbonate. Lake Resources has samples out for testing and scoping studies about to begin.

The next three companies are smaller in size but have also posted dramatic share price appreciation numbers year over year.

Here is their year over year price appreciation: 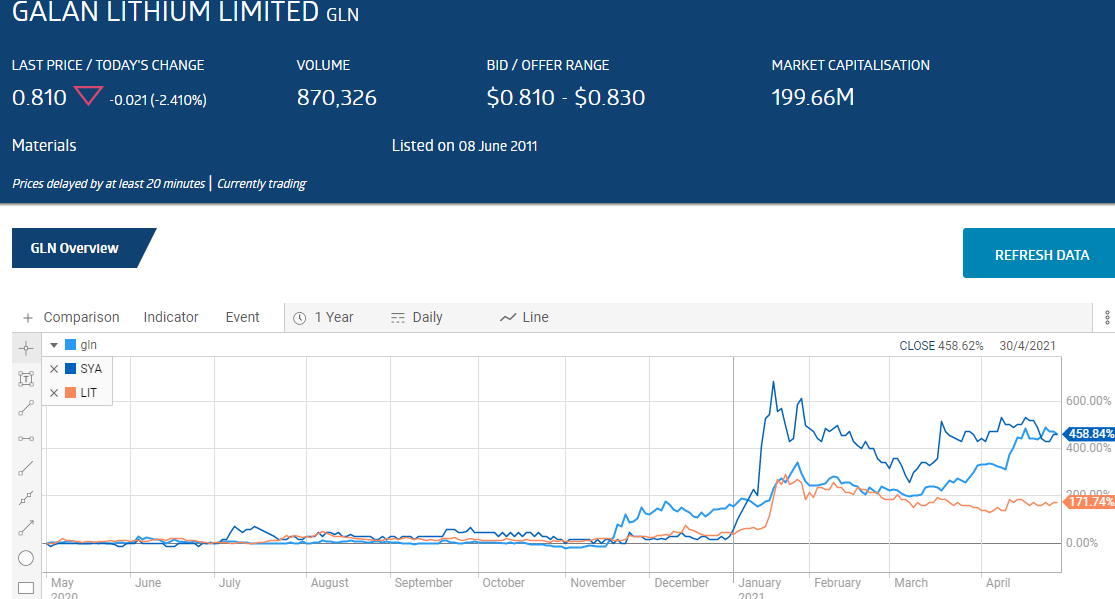 Galan is another lithium from brine company with assets in Argentina. Brine extraction is a more cost effective method than hard rock mining but suffers from its reliability on favorable weather conditions allowing brine pools to evaporate.

The company has two projects underway in Argentina and in early January acquired an 80% interest in the Greenbushes South Lithium Project from Lithium Australia. Greenbushes is a hard rock deposit in Western Australia near a major operating lithium mine.

Galan recently announced the “enhanced prospectivity” at Greenbushes, another in a string of positive announcements focusing on operational progress and positive sample testing results.

Sayona Mining remains an “emerging” player with promise coming from its two assets in the Canadian province of Quebec and another here in Western Australia. The flagship Authier Lithium Project has a completed definitive feasibility study and is awaiting regulatory approvals with “near term” construction in their plans. The company is looking to acquire another lithium mine nearby and is increasing its claims in a third prospect – the Tansim Lithium Project.

Finally, the company has a graphite and lithium/gold projects in progress in Western Australia.

Sayona has forged a “strategic partnership” with Piedmont Lithium, with Piedmont investing in Sayona and entering into a binding offtake agreement for up to 60,000 tonnes per year of lithium concentrate from Sayona.

As evidenced by its shedding of its majority interest in the Greenbushes Project, Lithium Australia is taking a different direction to potentially disrupt the sector with its extraction and recycling technologies. The company’s goal is to create a circular battery economy where spent Li-ion batteries can be recycled to create new batteries. Lithium Australia is also developing a proprietary extraction process to convert lithium and other mine wastes into lithium chemicals.

There are two small caps worthy of note that have also taken off in 2021. 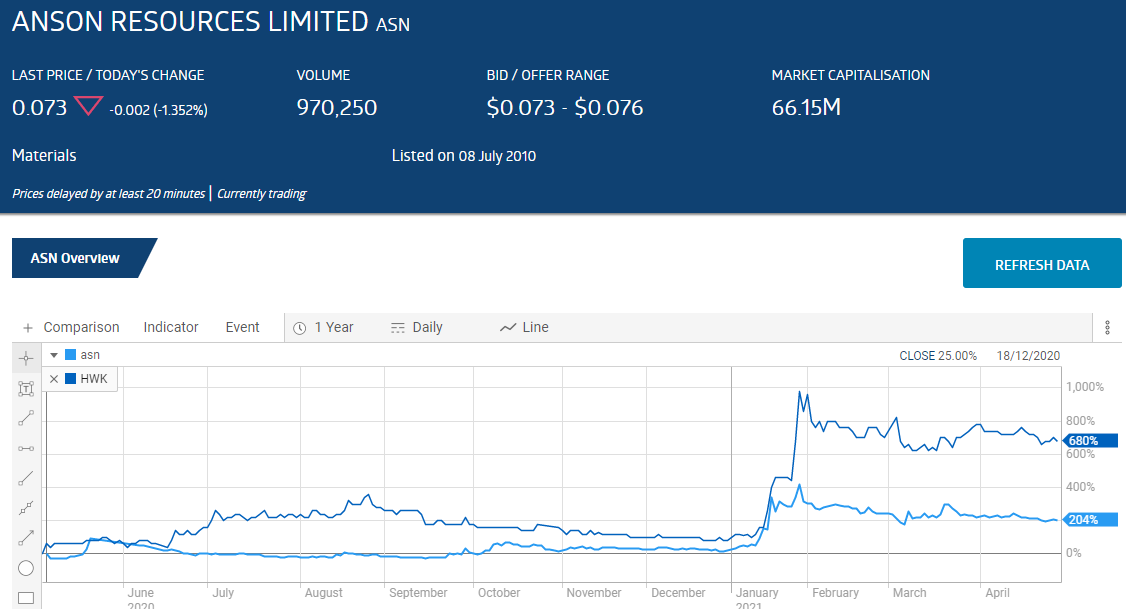 Anson Resources is a diversified miner with multiple projects in Western Australia but itis the company’s Paradox Basin Brine Project in strategically located Utah in the US that has investors excited. The company is developing a pilot plan to produce lithium for use by battery manufacturers in qualification testing.

In early January, the company announced battery equipment testing company Novonix (NVX) would be testing samples extracted from Paradox Basin. The latest positive announcement from Anson was the expansion of its exploration targets at Paradox.

Hawkstone is also a diversified miner with lithium projects in the US. The Big Sandy project in the state of Arizona is now producing lithium suitable for batteries. The company also operates the Lordsburg Project in nearby New Mexico in the US.

Skeptical investors might wonder if history will repeat itself as more and more miners are expanding their lithium operations and searching for more. However, this time the demand outlook has changed.

The International Energy Agency (IEA) in its Global EV Outlook for 2021 is decidedly bullish on the future of EV’s propelling the demand for lithium, with the following perhaps the most important fact.

The report also noted that 18 of the top 20 automobile manufacturers in the world ramping up EV production and four major truck manufacturers pointing to an all-electric future.

Young or old, newcomers to share market investing looking for …