Are Aquaculture Stocks Worth the Risk?

The company has created a “sea ranching” system where hatchery grown juvenile abalone are attached to artificial reefs, or abitats, in the wild and left to grow to maturity.

This process represents the promise of the aquaculture sector to meet the growing demand for seafood of equal quality to traditional wild or capture fishing.

Like many ASX listed aquaculture stocks, Ocean Grown Abalone debuted on the ASX with strong investor support, only to see the share price dwindle over time, this despite a compelling case for the future growth of this sector.

First, demand for seafood is rising. From a 2014-2015 Global Food Policy Report we can see projected fish demand through 2030 by country and region. 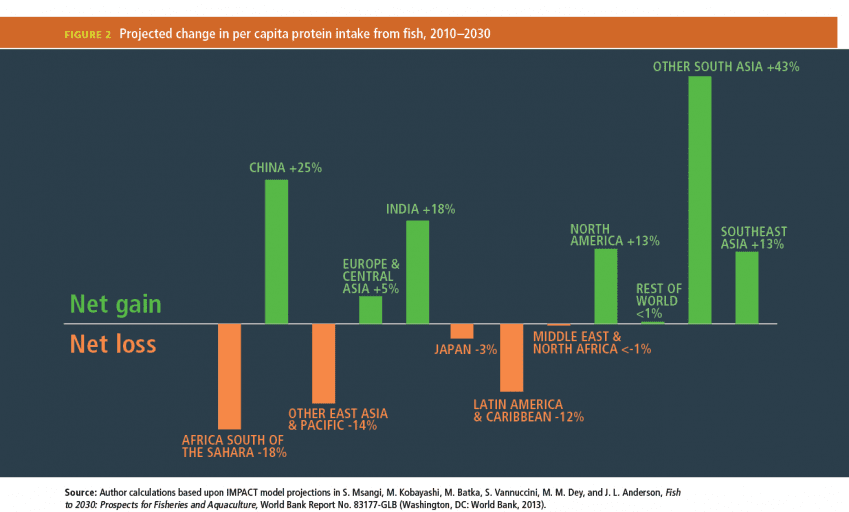 Second, wild fish stocks are becoming increasingly depleted from overfishing, creating opportunities for the farm raised aquaculture sector. The following pictogram — The State of World Fisheries and Aquaculture Fish to 2030 — is from the Food and Agriculture Organization (FAO) of the United Nations. 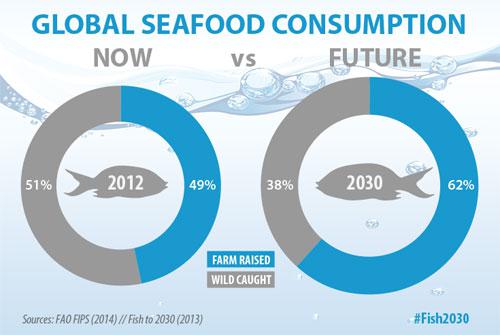 One could make a case for “irrational exuberance” propelling the share price of many aquaculture stocks, considering the reward and ignoring the substantial risk.

The significance of the Ocean Grown Abalone result is it is clear evidence of a farming process that works, from juvenile abalones to marketable product. An early aquaculture stock on the ASX serves as a prime example of irrational exuberance.

Clean Seas Seafood (CSS) now describes itself as “Australia’s only commercial producer of Hiramasa Yellowtail Kingfish” and the largest breeder outside Japan.

The company’s breeding program begins with eggs spawned from Clean Seas breeding stock in a hatchery, beginning in an incubator before transfer to special rearing tanks and upon maturity transferring the fingerlings to sea water tanks in the Spencer Gulf at Port Lincoln in South Australia.

The company’s Full Year 2019 Financial results showed a 16% rise in sales revenue, but statutory net profit dropped from $3.4 million in FY 2018 to $1.45 million, due to investments in expansion efforts and litigation costs from a lawsuit against one of the company’s suppliers. Underlying profit excluding exceptional items showed a slight increase, from $2.3 million to $2.6 million.

Clean Seas is expanding overseas markets as part of its “Vision 2025” effort, with an investor progress update to take place sometime in September.

The following table includes price movement information for Clean Seas and Ocean Grown along with six other ASX aquaculture stocks.

Tassal Group (TGR) and Huon Aquaculture (HUO) are the major players in the sector, both operating in Tasmania’s Macquarie Harbour and both in the salmon and salmon related products business. Huon also grows trout and a subsidiary of Tassal acquired a prawn operation in FY 2018.

Tassal adopted a strategy of increasing the biomass of its stock, meaning increasing the total weight by volume, with the intent of increasing Asian exports due to the demand for larger fish. Huon sued the Tasmanian government for allowing Tassal and another salmon farmer to do this, claiming its biomass exceeded limits and threatened the harbor environment but lost the suit.

Tassal sells its four branded salmon products internationally with an operation that spans the full cycle from hatching to farming to distribution and sales. The company’s Half Year 2019 Financial Results were record-setting, continuing the trend with its Full Year 2019 Results showing a 15.7% revenue increase along with a 12.5% bump in operating net profit. Statutory net profit rose 2% but investors were disappointed at the news the company was seeking to raise $109 million through a capital raise to fund the expansion of its prawn operations.

Tassal pays a dividend with a current yield of 4.2%, with an average annual growth rate of 9.4% over five years and 13% over ten. Total shareholder return – stock price appreciation plus dividend payments – over ten years had an average annual rate of 13.6% with 7.1% over five years and 6.1% over three years. The company has an analyst consensus recommendation of BUY.

Huon Aquaculture was said to have a competitive advantage in the Asian salmon market over Tassal in the past due to its higher average fish weight.

However, in June of this year the company downgraded its 2019 Full Year Financial Results expectations due to a variety of risks common to all aquaculture producers. Higher water temperatures, disease, and a jelly fish bloom in Tasmania all were expected to negatively impact Huon’s financial performance. In 2018 Huon made the news when storm-damaged holding pens allowed close to 120,000 salmon flee.

Management at both Tassal and Huon claim consumer demand exceeds supply, driving up the price of their products.

New Zealand King Salmon (NZK) has eight salmon sea farms in the protected waters of New Zealand’s Marlborough Sound, with room to grow. The company produces four brands of salmon, each tailored for a specific market niche, from chefs, to retailers, and to wholesalers worldwide.

The company listed on the ASX in 2016 with the share price rising 66% over that period.

The share price was slammed following an announcement that climate change induced challenging summer conditions of warmer water temperatures were increasing mortality rates despite efforts to mitigate the situation. Consequently, the company lowered its guidance. Full Year 2019 Results reflected the warning with a 40% fall in statutory net profit and an 8% increase in revenue, with revenues hitting record levels and underlying net profit down 11%. New Zealand King Salmon increased export shipments to all its markets, with North America up 9% and China up 150%. The company introduced a new production model for 2020 designed to deal with environmental issues and fish survival.

The Seafarms Group (SFG), an aquaculture producer of prawns, saw its share price skyrocket in July of 2016 on the announcement of its first international exports contract.

Although the company is generating revenue, profit has yet to be seen, but investors enthusiastically received the July 2018 news that Seafarms had secured regulatory approval for its future growth at the Project Sea Dragon, an integrated prawn producing, land-based operation for major expansion into international markets. The ambitious expansion calls for a series of prawn-producing ponds across the coasts of the Northern Territory and Western Australia. Replacing pens located in protected harbor and coastal sea areas with land-based ponds should allow year-round production with less risk. Seafarms management claims the project could generate $1.7 billion in export revenues in ten year.

Murray Cod Australia (MCA), like virtually all aquaculture producers, has an integrated business model, controlling farming from hatching to maturing to marketing. The company took the name of a highly desirable freshwater fish species, the Murray Cod, as its name, currently amended to the full title Aquna Sustainable Murray Cod.

The company promotes the Murray Cod as the best freshwater white-fleshed fish in the world, found only here in Australia. The fish are farmed in open ponds in their natural environment — the Murray-Darling Basin river system.

Murray Cod Australia is generating revenue – FY 2019 saw a 32% increase – but has yet to post a profit, with mounting losses. The company has no competition, as commercial fishing of the species is banned in Australia. The FY 2019 Financial Results Investor Presentation claims “current demand is outstripping growth in supply.”

Angel Seafood (AS1) produces certified organic oysters. The company is new to the ASX, listing in February of 2019. The share price is the star performer of the ASX aquaculture sector, year over year, besting the top three players.

The company is family owned with big plans to increase its exports in international markets.

Angel Seafood’s financial performance for FY 2019 justified investor confidence in the stock. Revenues were up 192% and the company posted its first ASX net profit of $305 thousand dollars, a dramatic reversal from and FY 2018 loss of $1,143 million.

Angel Seafood began exporting to Hong Kong at the end of 2018 from its renovated Port Lincoln Export Facility. The company increased its growing capacity to 20 million oysters annually.

All farming stocks suffer from external conditions beyond the control of the producer, such as weather and disease, and the aquaculture sector is no exception. These are high risk stocks subject to extreme volatility should negative events impact their sole source of revenue – the single species of seafood they produce.